Despite its flaws, the Brave Gohkin AV-98 Ingram unit 1 & 2 (Movie Version) is a really fantastic piece of modern gokin. It is just a joy to hold. 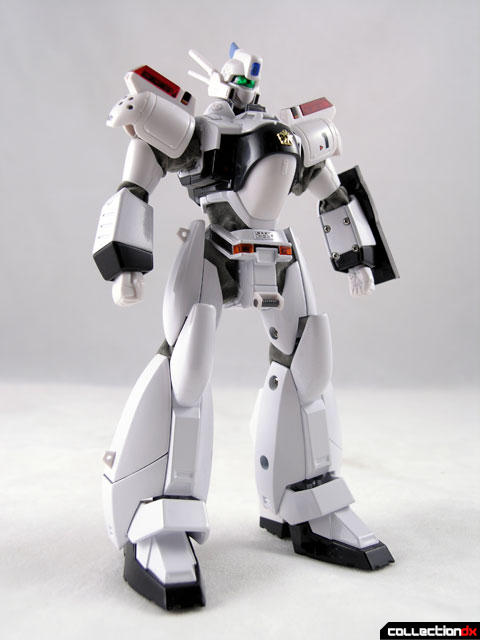 I had reservations when CM announced that they were putting out a gokin Patlabor toy. I had previously gotten one of their Vifam toys and it disintegrated in my hands.  Seeing as I am a huge Patlabor nerd, I decided to take the plunge and order it from HobbyLink Japan, and I am glad I did.

The figure stands nicely with your standard Soul of Chogokin figures. The toy has an ample amount of die cast, and I suspect that the inner skeleton is die cast as well. The toy is really heavy and sturdy.

The AV-98 Ingram 1 comes from the anime series Mobile Police Patlabor (機動警察パトレイバー, Kidō keisatsu patoreibā) a manga franchise created by Masami Yūki. The term Patlabor is a mash-up of Patrol and Labor.

The toy has so many cool features that I will just get right into them. if you want, you can skip right to the video review for this great toy.

Cloth joint covers. CM’s used kind of a felt cloth covering around all of the major joints, just like is shown in the anime. Brilliant. 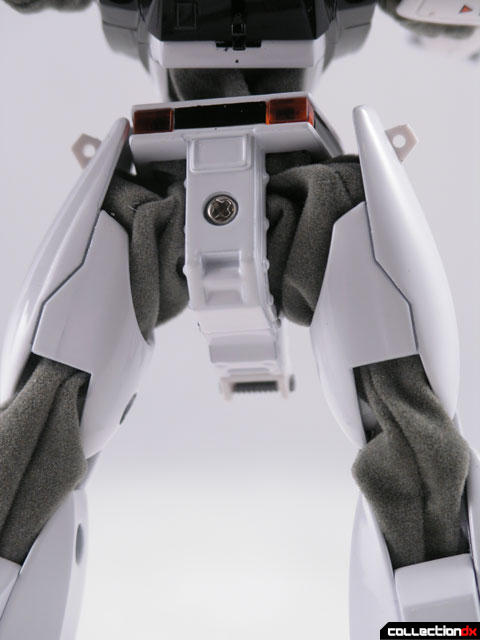 Opening panel for revolver storage. The right leg has an opening metal door that reveals a storage spot for the Ingram’s revolver. When the door is opened, the revolver is raised up. 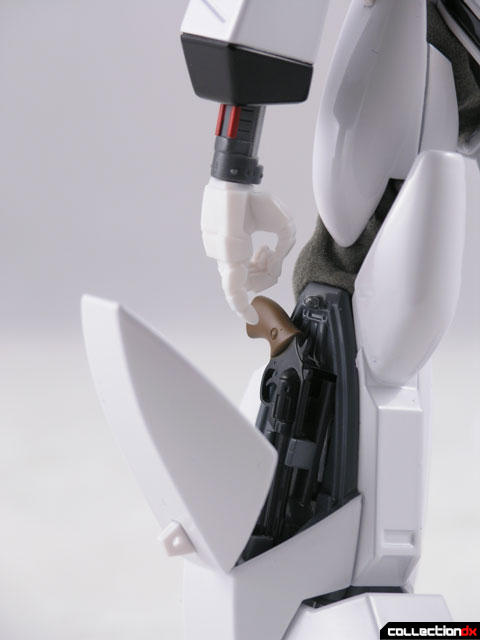 Extending arm. The right forearm extends to grab on to the revolver. You have to pull on it, it is not spring loaded.

Metal shield. The shield is a solid chunk of metal that attaches to the arm at 2 pegs. Inside the shield can store the shortened anti-labor stun stick. The shield is a bit too heavy and can fall off it you bump it. 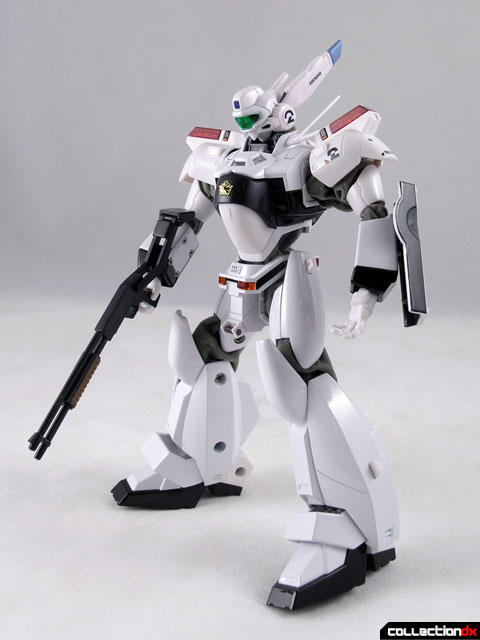 Light up shoulders. Switching the switch on the back will cause the red lights on the shoulders to blink. The first time you use it, you have to remove the back panel, remove the battery, and then remove a small clear plastic circle. Replace the battery and the cover and it will now work. WARNING – take care not to pry off the silver switch box. More info on that below. 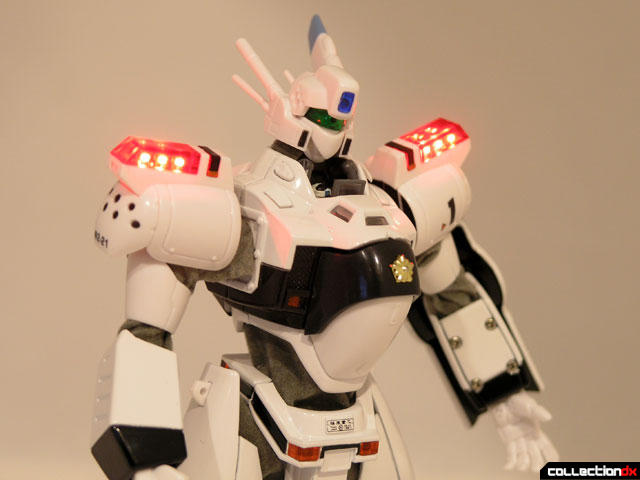 Opening cockpit. The Ingram comes with 2 pilots – They are supposed to be Noa and Ota, the pilots of units 1 and 2 respectively. The face sculpts are really bad and the only way you can tell them apart is by size. The front cockpit opens in two places, and inside is a small seat. You place the pilot in the seat and close the assembly. On the back, BEHIND THE BATTERY, is a small lever. You must take the included tool; attach it to the lever, and then lift up to raise the pilot to the top position. This is a huge pain in the ass. In the upper cockpit there is also a moveable window. 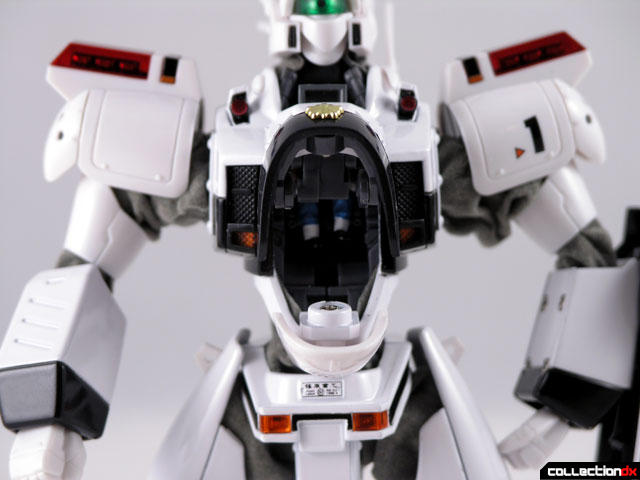 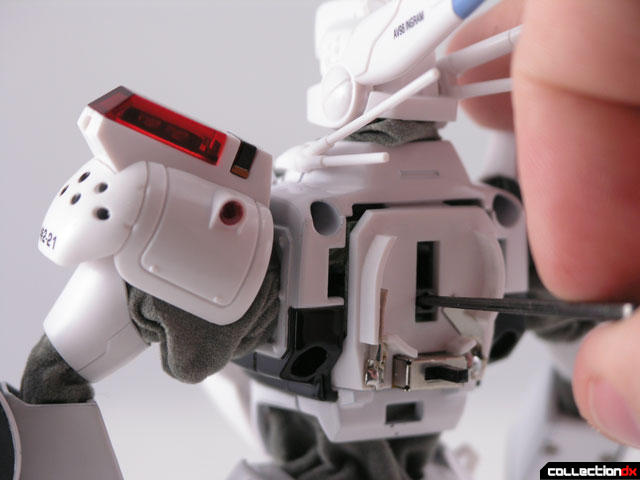 Swappable head and shoulders. This toy can be configured to be either Unit 1 or Unit 2. The main differences between the two are different heads, and different shoulder armor. The shoulder armors are easy enough to replace, but the head is a pain. The head is made of several small pieces that you have to assemble. The reason for this is that you can make a third head, which is the same as unit 1’s except for a blast shield. 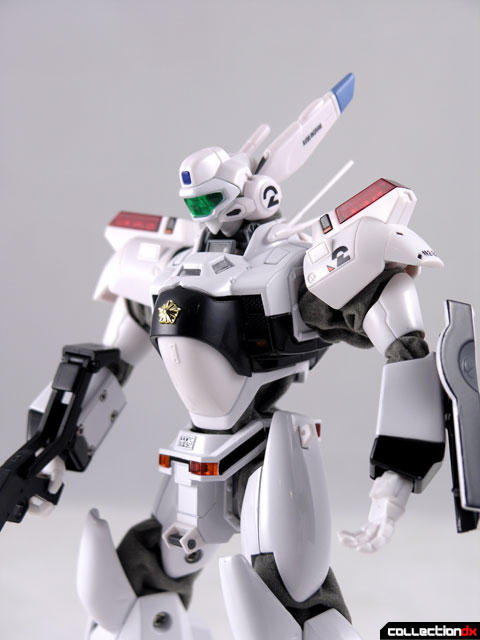 Spotlights. There are two small panels on the upper chest that are removable and can be replaced with non-working spotlights. This is all well and good – they look great, but those small white panels are too small – I kept dropping them all over the place. Damn these gorilla hands of mine… 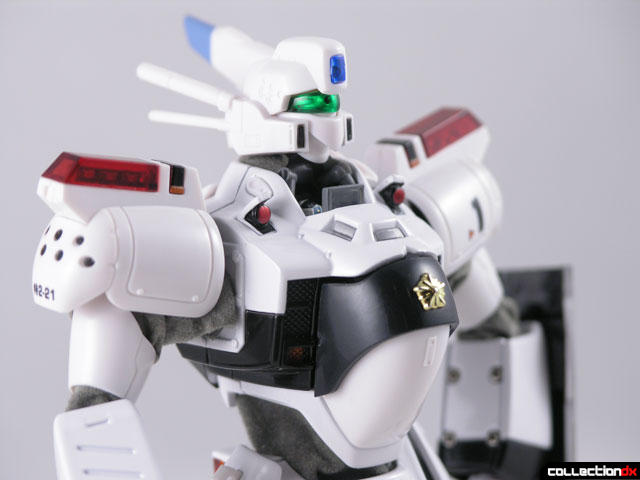 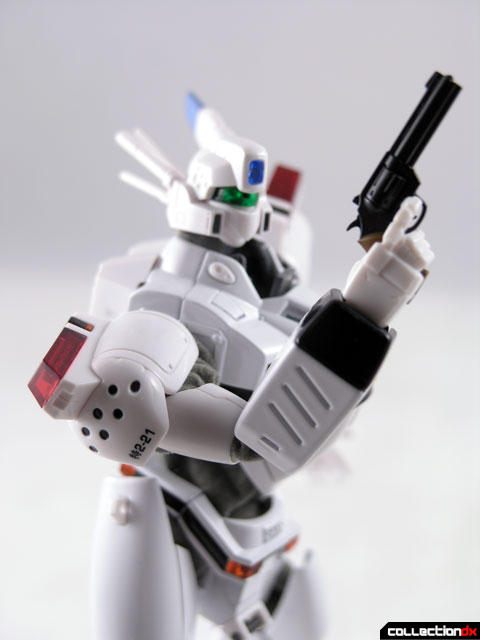 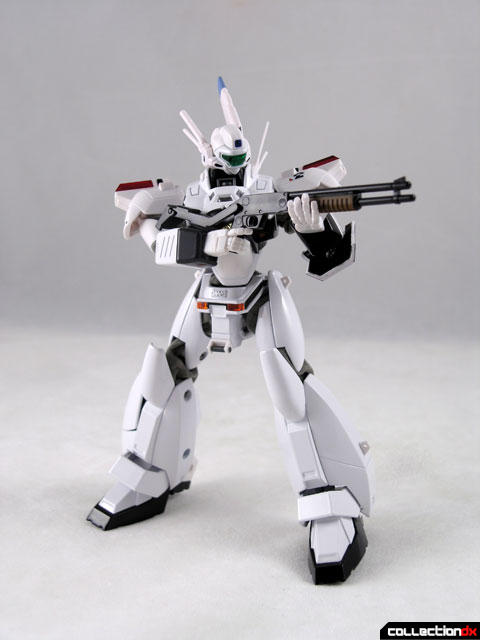 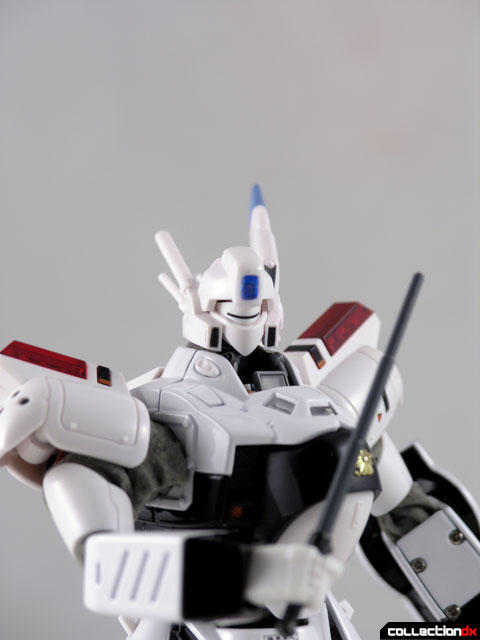 Stickers. There are a few stickers – one for the display base, some license plate stickers and an Alphonse sticker. The thing is, this toy is designed to be used as unit 1 OR Unit 2. If you add the Alphonse sticker, that sticker is only for unit 1. In addition, the license plates come for units 1, 2 or 3. Placing the stickers on kind of locks you into displaying it in one specific mode.

Base. The base comes in two parts, and assembles easily. It is molded in all white, and it is made to resemble a maintenance hangar, with small steps and nooks inside. On the top is a crane boom and a red light, but the light does not light up. 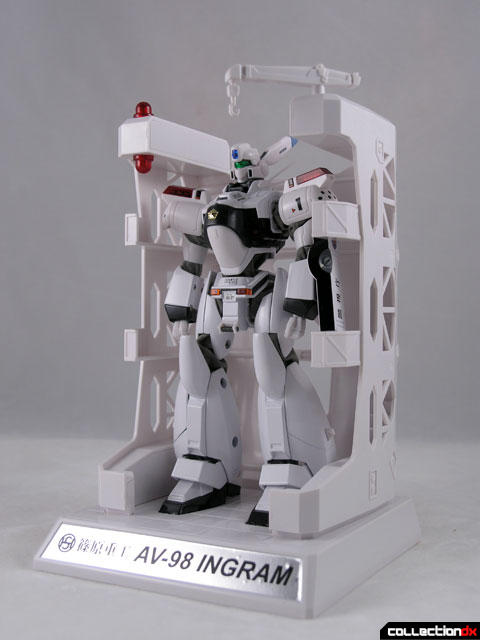 Yes, the Ingram does have its flaws. The design for the cockpit lifting mechanism is lame, and the fragile switch box for the lights needs to be watched out for. The head assembly seems unnecessarily complicated and the stickers limit you to one mode only. But the thing is so impressive in every other respect, you can’t help but be in awe of it. The video shows the features much better than this written review, so spend some time watching it and make up your own opinion. I am sure though, that you will love this toy. It is available now at HobbyLink Japan.

5 comments posted
You do the best video

You do the best video reviews I've ever seen. I've watched them all. You need to do them far more often. You just have an excellent presentation style.

Thanks, I wish I had the time to do more but doing a video review is really time consuming!

I can totally see that. Especially watching you really take time with these. Plus, not every toy is going to make for good video reviews. For instance, I severely doubt you could make vinyl kaiju figures all that interesting in a video review.

Good job. This makes me want to buy this. Metal, cloth and flashing lights. Nice additions. Otherwise, I probably wouldn't have given this a second glance as I'm not really a fan of the series or design.

So I got this guy rather cheap about a year ago, the only problem with it are that some screws were pretty worn, and the guy lost the sticker sheet, is there ANY way someone can hook me up with one or print the sheet or... something... I also lost the one of the covers and one of the fog lights for this guy, any help or pointers would be highly appreciated.