This is a review for the Aura Battler Virunvee figure from the Lord Of Byston Well (LOB) toy line by Bandai.

Set on Earth and the trans-dimensional world of Byston Well, Aura Battler Dunbine follows the exploits of a group of young men plucked from their earthly existence and trained (often against their will) into becoming pilot/conscripts for despotic DRAKE LUFT'S army of unique "mind-powered" robot weapons-the Aura Battlers. One of these new recruits, SHO ZAMA, does not surrender to the indoctrination from Drake Luft's persuasive instructors, and escapes to join the opposition forces in order to save the Earth.

Mind you, I am not all that familiar with the anime, but I do love the mecha designs from Dunbine. You can imagine my anticipation when news broke out that Bandai will be coming out with a new line of toys for this show. 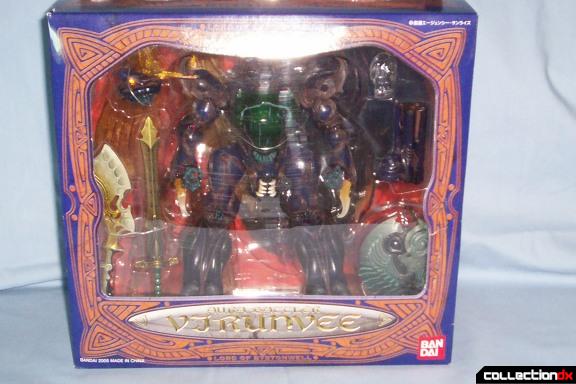 The box is similar to the Super Imaginative Chogokin (SIC) box. Stadard sized window-type box that allows a view of the toy from the front, top, and sides. It measures 31.0 x 28.0 x 13.0 cm, and the package itself weighs about 1010grams. Compared to the SIC boxes though, the material used for the LOB boxes feel more sturdy.

The box contains a large 3 layer plastic tray. The top one holds the Virunvee, and it's weapons, the second tray holds the wing attachments, and booster, and the third holds the display base and support 'spine.' It also contains an orange-red colored cardboard insert, and of course, the user manual. The manual I got had very dark pictures though. Slightly difficult to discern what it's trying to show. Luckily, the toy is not complicated. It took me about 5 minutes to assemble everything. 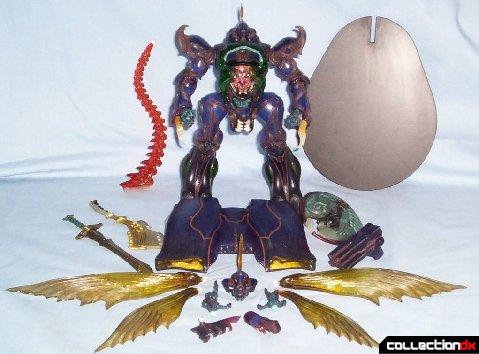 The Virunvee comes with the following weapons and accessories: 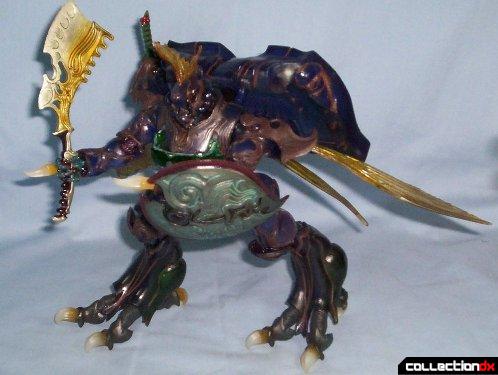 The Virunvee is aesthetically pleasing to say the least. It is made entirely of translucent, purple PVC. Absolutely no die-cast content on the toy itself. It stands approximately 9 inches tall from the base to the top of it's 'mohawk.'

The color is injected into the plastic, with some 'chocolate brown' paint to highlight the markings on it's body. The details on this figure are very crisp. From the alien bug-like head sculpt, to the imbedded markings on the body, the wings, to the wrinkles on the feet.

The figure also boasts of very intricate detail work in the waist area, the neck, and head. Note, that the replacement head can be 'split' in half (top and bottom), and this is where you'll see the details.

Although it's made of PVC, the Virunvee is fairly heavy, especially when it's assembled.

The Wing attachments come in two pairs- small and large. The larger pieces are the outer wings, and the smaller ones are the inner wings. All four pieces attach via a ball and socket system at the back of the toy.

The back panel/booster attaches via a male and female plug near the shoulders of the toy. Other accessories like the shield and beam cannon attach via a clip that you can slide onto the Virunvee's left forearm.

The Virunvee has several points of articulation, most of which use the ball & socket system. Double joints for the elbow and knees. This allows the figure to pull off a lot of dynamic poses, and with the wide coverage of it's feet, the toy can hold these dynamic poses very well. The weapon hand (right only) can hold on to the axe, and sword very well, while pulling off some dynamic poses. 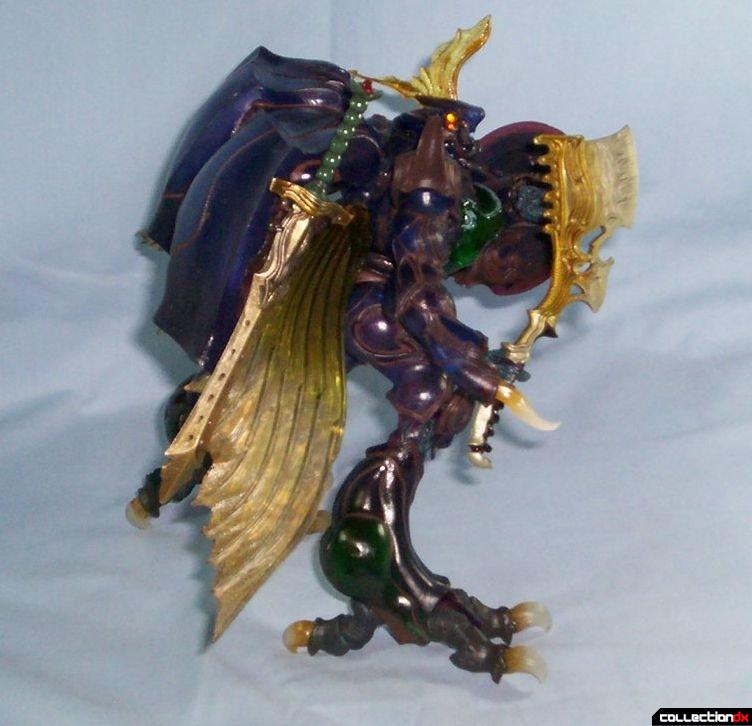 Aside from the very impressive articulation of the toy, it also has some features that make it a worthy purchase. The cockpit area that covers the chest and belly can open and close.The pilot figure fits snugly into this detailed cockpit, and is kept in place by a movable pilot stick that can move up and down. In the up position, it keeps the pilot seated. On the down position, it allows you to take the pilot figure out of the cockpit.

The display stand with the support 'spine' is also a good feature of the set. The spine is made up of the same translucent plastic, but it can hold the figure up very well, in spite of it's weight. You can put the Virunvee in any pose where it's feet isn't touching the base, and the support spine will hold it up without buckling or breaking.

The other feature of the toy (which I like very much) is the fact that it's made up entirely of semi-translucent purple PVC plastic.

Why you may ask?

Well, I believe the purpose of the sculptor to use translucent plastic was to give the toy a certain look when placed near a light source. When placed near a good light source (usually behind the figure), the translucent material allows some light through the figure. This gives the toy a glowing effect like it was emitting it's 'battle aura' (for lack of a better term) to freak out it's enemy.

The eyes on this figure are made of translucent amber colored plastic, and when given the same light source, it makes the eyes look like they are burning amid the contrasting purple glow. It's a very nice effect in my option, although I have read some comments that say otherwise. 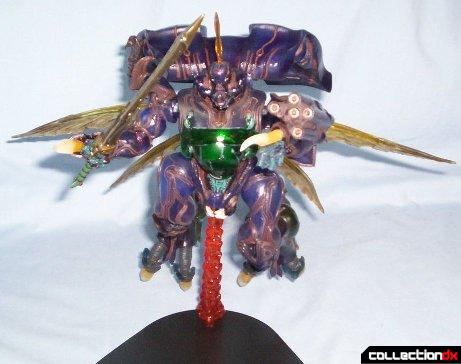 While I had a lot of nice things to say about this toy, it is not without it's flaws, but mind you, the flaws range from the 'I can live with that' kind to the 'It's so bad I want to burn Bandai down' kind.

Nothing yet. As of this review, I am still contemplating if I'll just super-glue it into place, or modify it by using some model putty to thicken up the male peg to make it fit.

The LOB Vol.02 Virunvee is a mixed bag.

Aesthetically, it is very pleasing to look at, and is a commanding presence on your display shelf because of it's bulk, and impressive sculpt.

Unfortunately, the issues on this figure is a real let down. Having to contend to limbs that keep falling off, and parts that don't fit right is just too much for a toy that uses very simple engineering mechanics.

The Virunvee figure from Bandai's Lord Of Bystonwell line gets a 2.5 out of 5.