This is a review for the 1/6th scale "Tandem Twin Animal Girls: Lynx" line of statues from Yamato Story Image Figure Ex!

The Tandem Twin box looks very "quaint" when compared to the boxes that housed previous SIF Ex figures from Yamato. This one actually has just the right dimensions (5.25 X 8.25 X 10.25 inches) to show off the figure from the clear plastic window, and still have just enough space to protect the figure, should the box be dropped. 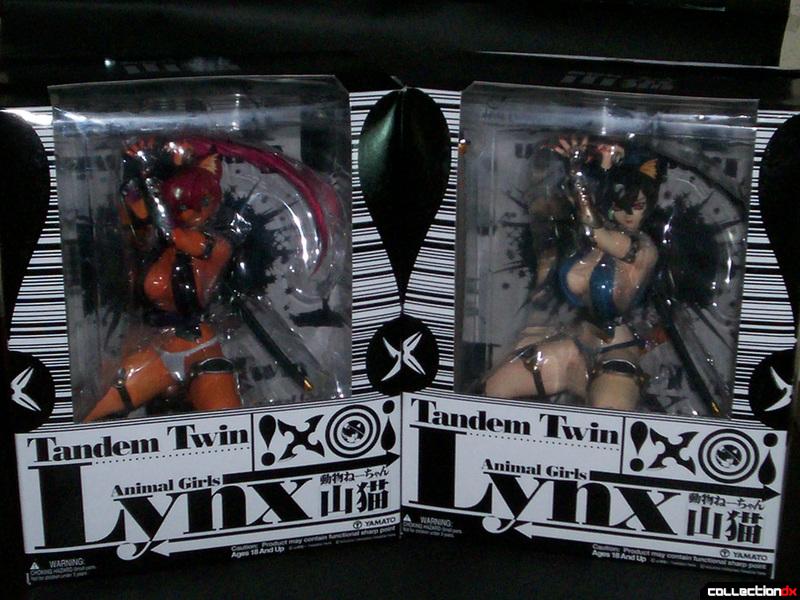 It also has very basic visual designs. Mostly a mix of black and white images and text. The only part of the box that has any color is the back, where pictures of the Twins are shown. 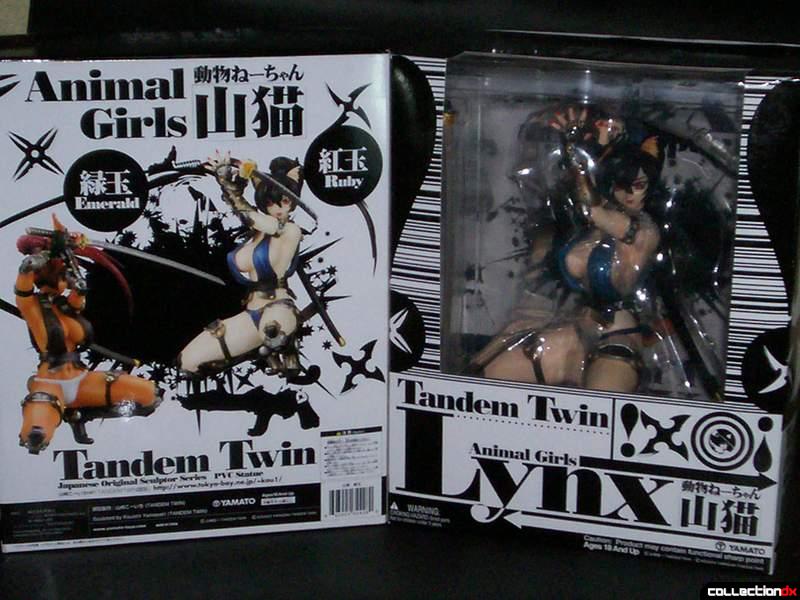 I'd have to commend Yamato with this one. It's a well made box that doesn't eat up any un-necessary space. Here's hoping that they go the same road for their Macross boxes.

The box contains an extra cardboard inlay that also poses as a background for the figure. It also adds extra durability for the entire package.

The pretty kitty is enclosed in a three layer, clear plastic tray. No separate tray for the Display Base this time. 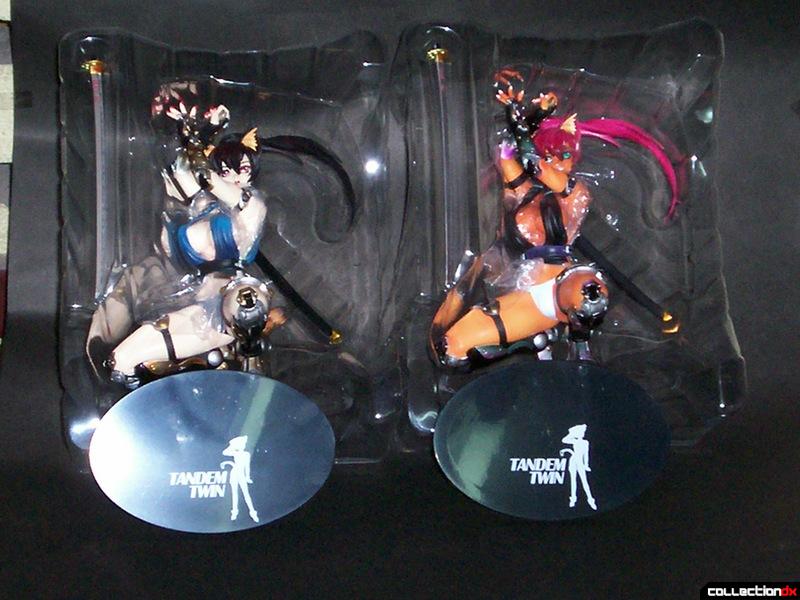 This is a static figure, so this means there is absolutely no articulation what so ever on these ladies.

Like that great Austin Powers line goes: "They're Twins Basil! Twins!" , so I had to get both Emerald And Ruby for my collection. 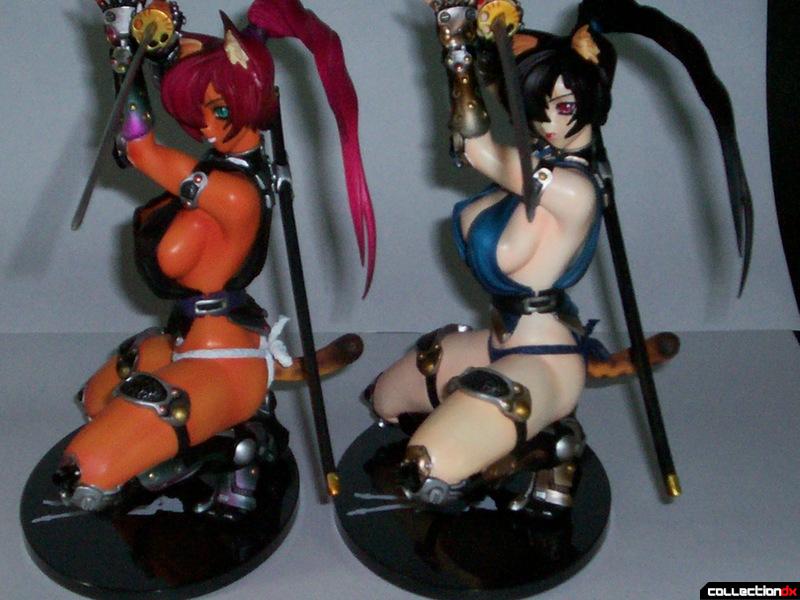 To help you tell one from the other:

It's basically the same figure, with only the change in colors giving each of the twins, their own look.

These kitties come posed and ready for action right out of the box. But there is more than meets the eye about these figures. They are also ready for a "different" kind of swordplay action- but that's for later.

The figure is 7.5 inches tall in the kneeling position. They're posed with their swords held above their heads, ready to poke someone's eye out just for the fun of it. 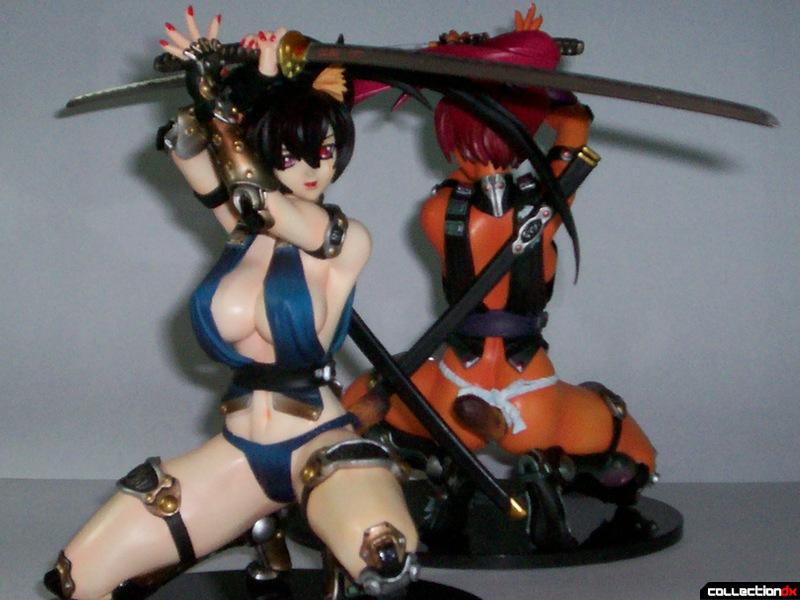 If there's something that I can rave on all day about these figures, it's the absolutely impressive details that have been put into it! Kouichi Yamazaki did a real number on these figures.

You'll see a lot of detail work like small bolts, fasteners, even engravings on the Arm Bracers, leg armors and binders. You don't have to look really hard to notice these little details.

You'll also find some on her shoulder strap, the emblem on the sword sheath or "Saya" on her back, and the small pouches on her belt.

What's also surprised me about these figures is, the FLAWLESS paint job! Now, Yamato's had a bad rap with quality control, particularly with paint applications and finishes, but this time it's different! I looked at both Emerald and Ruby twice over, and could not even spot one paint blotch, paint bleed, or paint chip that was so prevalent on other Yamato SIF Ex releases.The excellent details on the sculpt were very well complimented by the equally well executed paint application. It's like Yamato actually did their homework on this one!

I also did not see any problems with the assembly. No seams, no traces of model cement seeping out of cracks, no bad fitting. Worlds away from Kaiyodo's Wonder Festival Cammy figure that I reviewed a while back.

Simply put, this figure is PERFECT!

Something that I have not been able to say about a Yamato product for a while now.

Although it is not immediately visible, this figure 'actually' comes with three accessories:

The Display base is your basic black, plastic base. The only difference with this base from the previous bases that were included with SIF Ex figures is that the Tandem Twin display bases come with a pre-painted logo of the line. 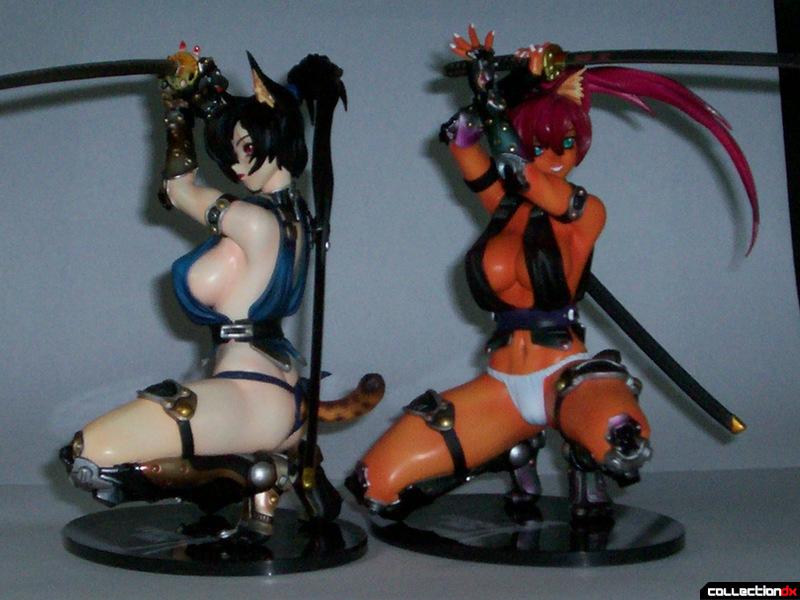 The Twins already have the Sword Handle or "Tsuka" in hand right out of the box, and it's fixed into her right hand. The sword blade comes separately, and has to be attached into the handle to complete the statue.

The blade is 6 inches long and is very well detailed to say the least. If it were not made of plastic, you'd probably mistake it for one of those fancy, samurai sword letter openers that cost about $30.00 each. The major details on the blade include the "Hamon" or temperline, the "Horimono" or engraving, and the "Tsuba" or hand guard.

Like I mentioned earlier, this is one of the accessories that's not immediately "visible" on the box.

Because she's wearing it!

Yes folks! I called her top an accessory, because it can be REMOVED from the figure! The top can be removed to reveal those wonderful.... uh....assets for everyone to see! Definitely up for a different kind of action! 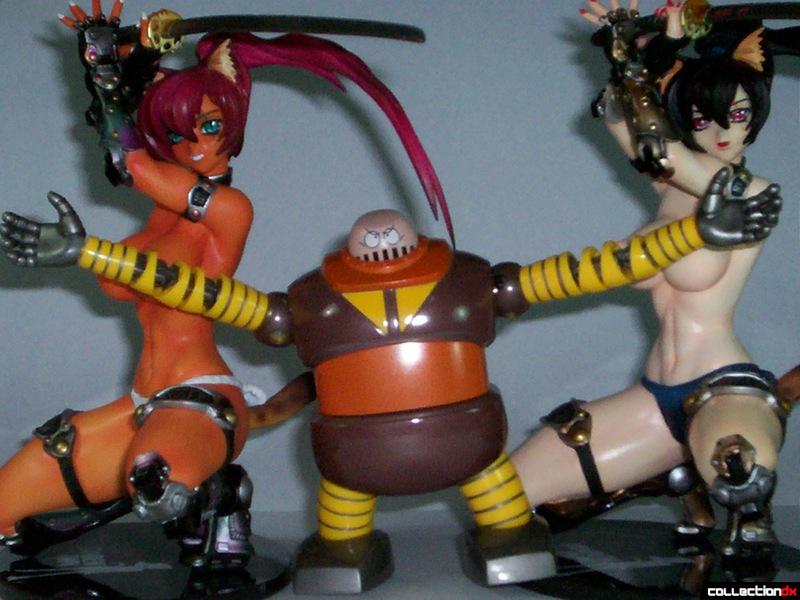 It's un-noticeable when you first open the box, but there are instructions on one of the lids on how to remove her top.

Just a bit of a warning though, don't throw away the plastic that's been inserted in between the vinyl top and the figure. The note on the lid says the paint in the inner part of the vinyl top "may" stick to the figure.

This has not happened to any of my Lynx figures yet mind you. I checked the back of her top and it has a smooth and glossy finish, which doesn't feel like it may rub off, but I didn't want to take any chances.

If you'll be displaying this figure without her top on, then you're safe. If you'll be keeping her top on, you might want to get a little artistic and cut off some plastic and lay it between the vinyl top, and the figure to protect it.

Other than this part of the review makes me want to go out and eat some Porter House steak, NO!

I have absolutely N-O-T-H-I-N-G bad to say about this figure as I believe it's PERFECT! From the very quaint box, the sculpt of the toy itself, to the paint application and superb details (not to mention the removable top- guilty pleasure), the Tandem Twin Lynx figures are flawless!

The Tandem Twin Lynx figures from Yamato's Japanese Sculptor Original Character Series is, to date, the best figure they released. Worlds better than the Kawu Uncho figure, which is one of my favorites.

Simply put, Yamato outdone themselves this time around, quality wise especially. They were given a wonderfully sculpted and detailed statue, and they did an absolutely and equally wonderful job with not only the paint application, and 'cleanliness' of the finish on the toy itself, but the packaging as well. Something that they are notorious for.

According to HLJ.COM, the Emerald and Ruby figures have been discontinued. However, Yamato still has 2 pairs of variants on the way. Topaz (white) will be coming this December 2006, then Amethyst (purple), a fifth and posibly a sixth (they are twins after all) in 2007. We'll also be getting a different type of Animal Girl, a Lamb! Look out for those!

Lastly, this goes without saying, but Yamato's Tandem Twin Lynx: Ruby & Emerald figures get a perfect 5 out of 5! 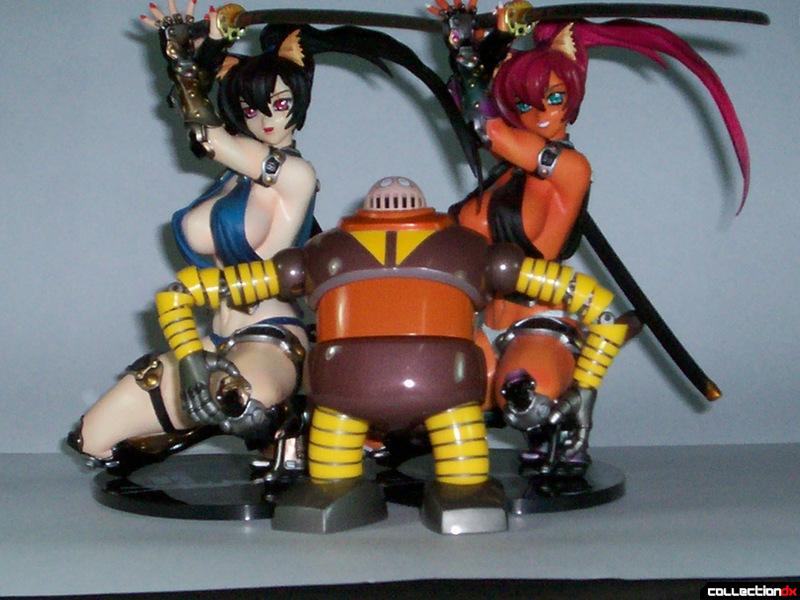 They are simply perfect! I hope this is the start of a trend with Yamato's boxes, and paint applications!