When I was in elementary school, one of my friends managed to get his hands on a video game called Super Robot Wars 64. This game was mind boggling to me. It had Gundam Wing, Mazinger Z, Getter Robo, and a whole bunch of other giant robots that I didn't know about. It even had female robots with breast missiles and lasers! There was one in particular that really stuck out for me. A blue robot with a Gundam-style mask plate, and a green visor. It had the most awesome theme song and punched the crap out of other robots. I didn't know what this robot was, but I desperately wanted to know more about it. 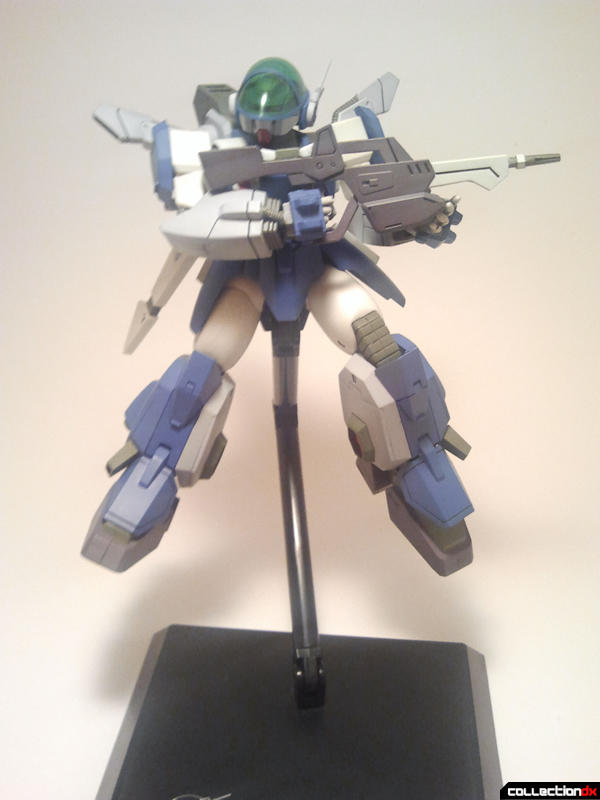 In many ways that robot was what sparked my passion to learn more about all the different giant robots there were out there, and it has a special place in my heart because of it. That robot was SPT Layzner.

This is the 1/72 SPT Layzner from Kotobukiya, and is a part of their S.U.G.O.I toy line; a toy line that only had a hand full of toys released before it's end. How does it stand up today? Read on to find out.

The Layzner is packed in a very nice box with a fold out flap secured with Velcro. Open the flap to see some nice line art and the toy through a window as well. 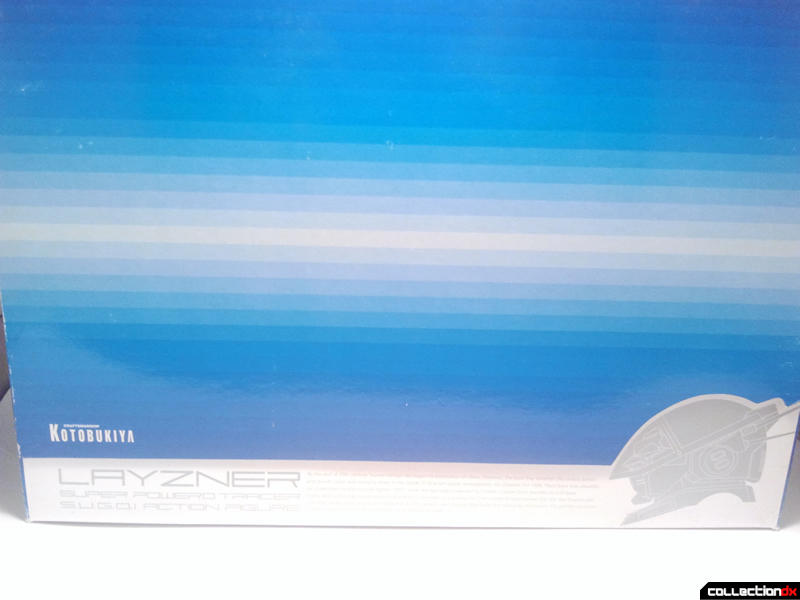 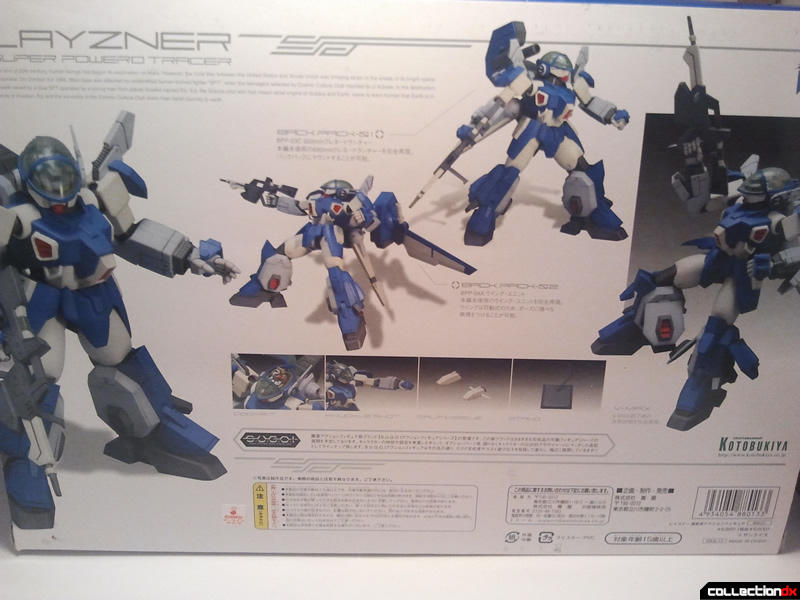 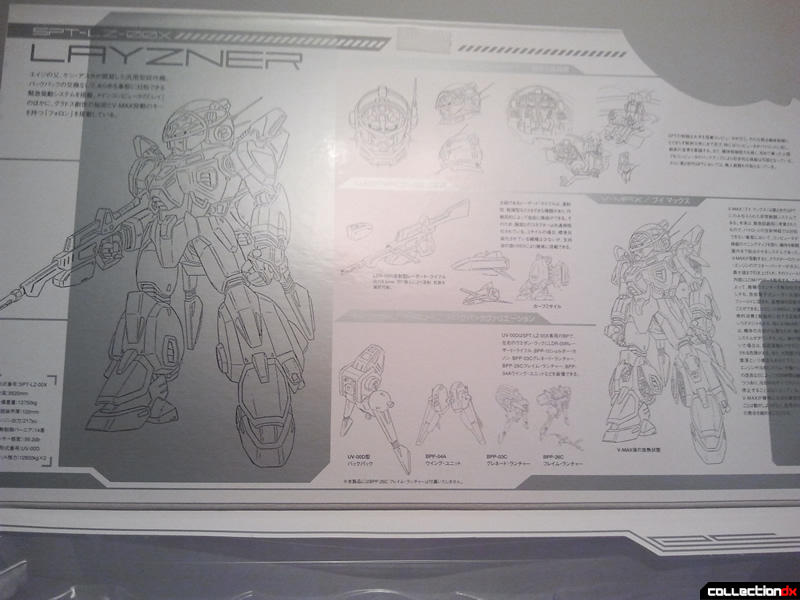 Once out of the package, Layzner feels pretty good. The figure has a nice weight to it. Some of the joints were stuck because of dried paint, but with a little bit of gentle pressure the joints were all smooth and good to go. A lot of the paint has a dry brushed feel to it that makes it feel slightly fragile. 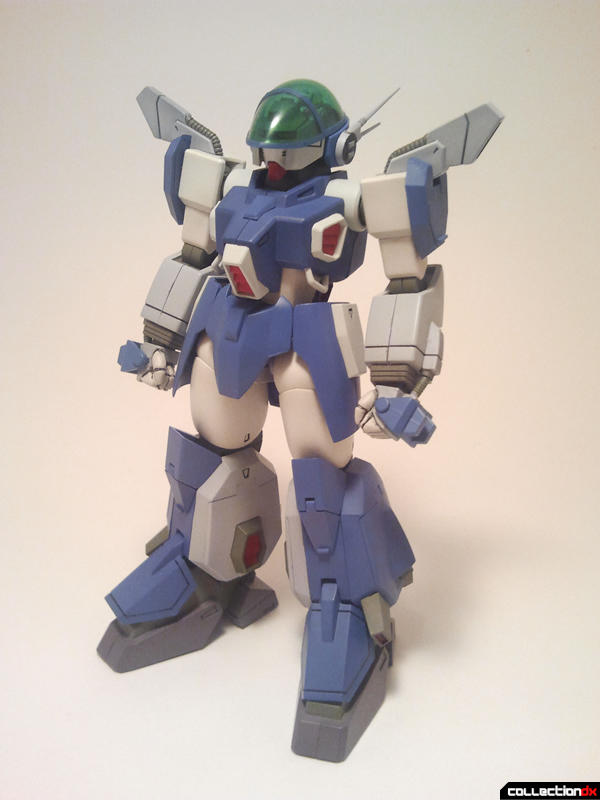 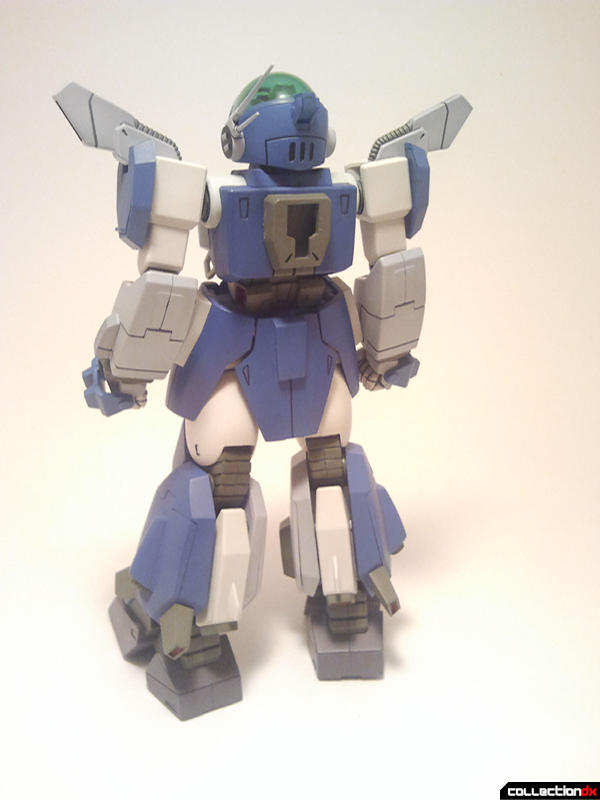 The detail on this figure is quite excellent. There are plenty of sharp edges and panel lines that make this toy feel like more than just a cheap action figure. 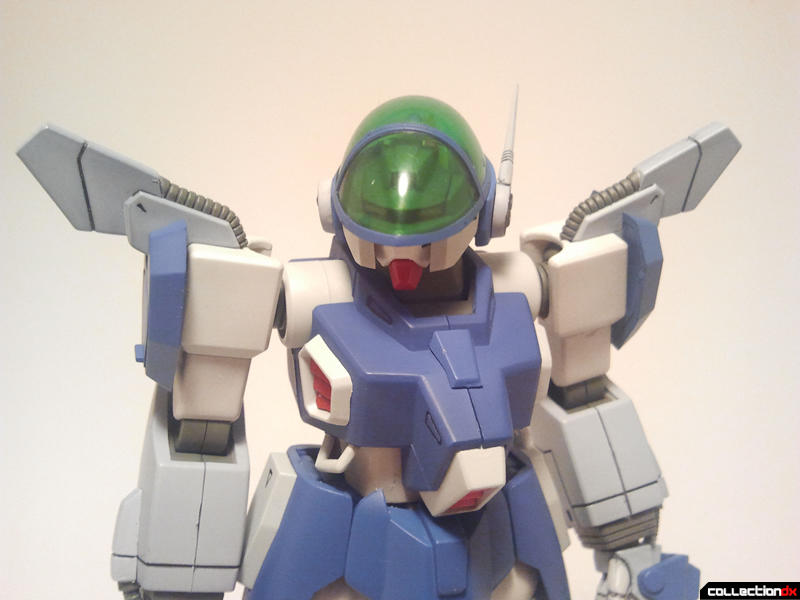 Even the cockpit is nicely detailed, with a well painted tiny Eiji sitting inside of the cockpit as well. 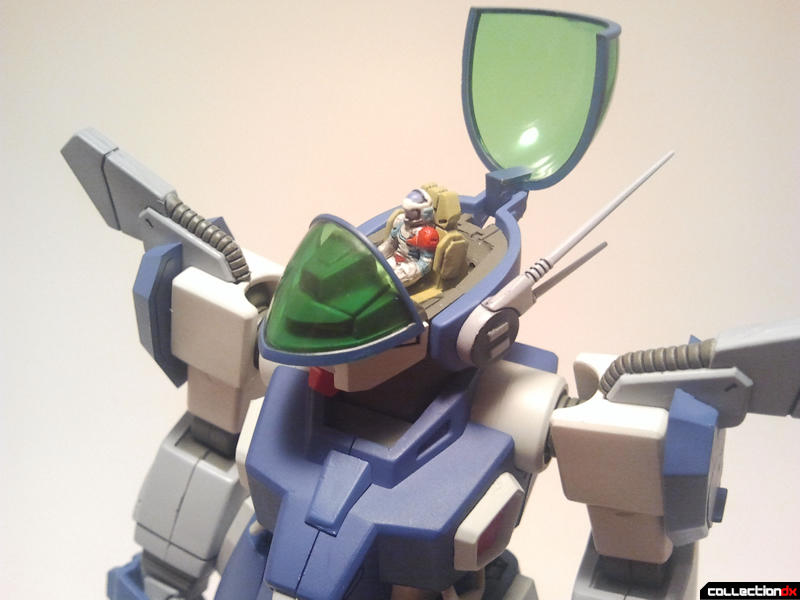 The articulation on Layzner is pretty good for a toy that's a few years old. Ball jointed shoulders, bicep swivels, elbows, wrist swivels, Layzner has all of the basic articulation that a robot toy needs. Although Layzner is missing a lot of the more extreme articulation points like ankle swivels and double-jointed arms and legs, he is still able to move pretty well. 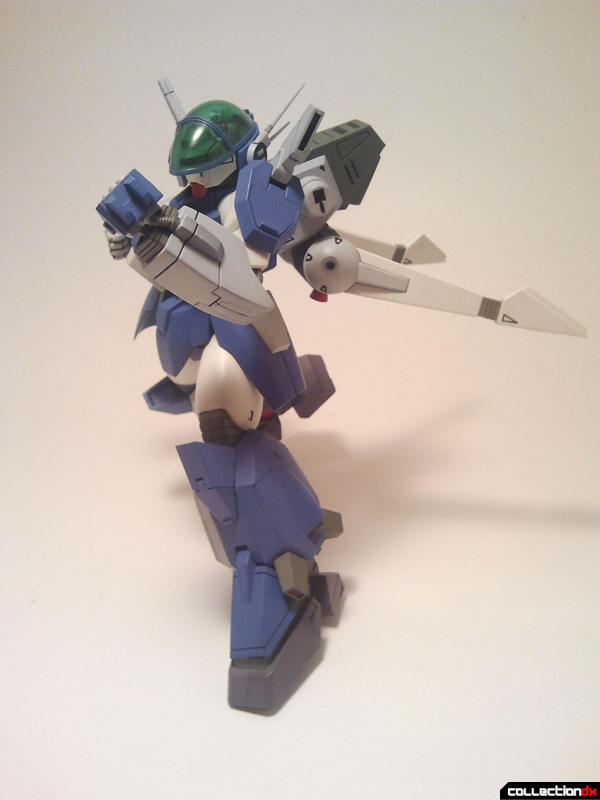 The wrists are a bit limited because of the wires that peg into the forearms, but the material is flexible enough that you can swivel the wrists a little bit. 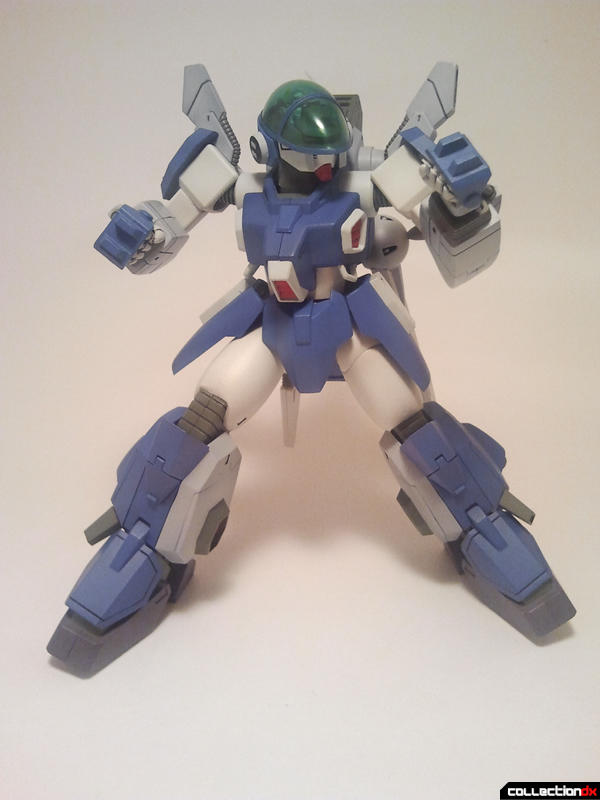 Layzner comes with quite a number of accessories. He has swappable hands, including fists, splayed hands, and a rifle holding hand. The rifle hand is molded to only hold the rifle in the right hand unfortunately. The rifle also has an additional handle for the left hand to support it, but it snapped off when I tried to pull it out. Considering there was no hand to hold the handle in the first place, I think that it's an acceptable loss. 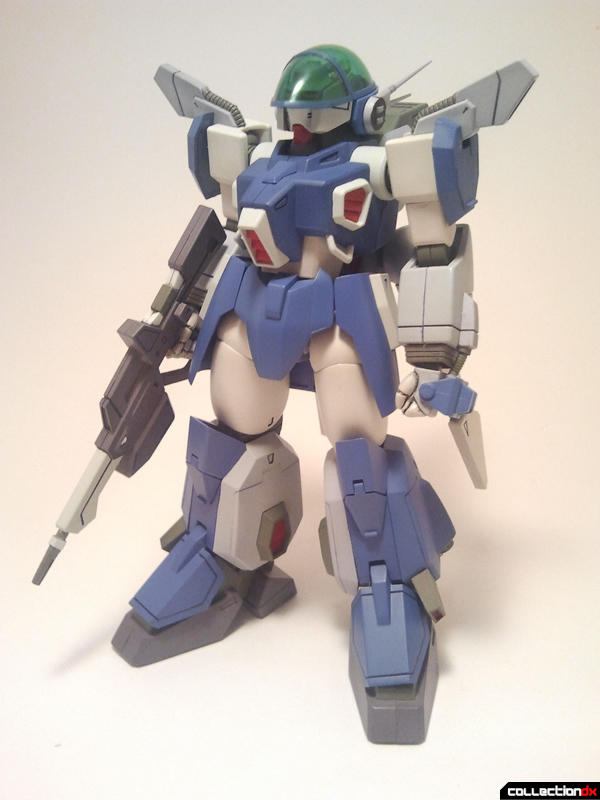 Layzner also includes calf missiles, which are exactly what the sound like: missiles that store on Layzner's calves. These peg right in and can be removed easily, and also feature tiny wings so they can fly and destroy their enemies. 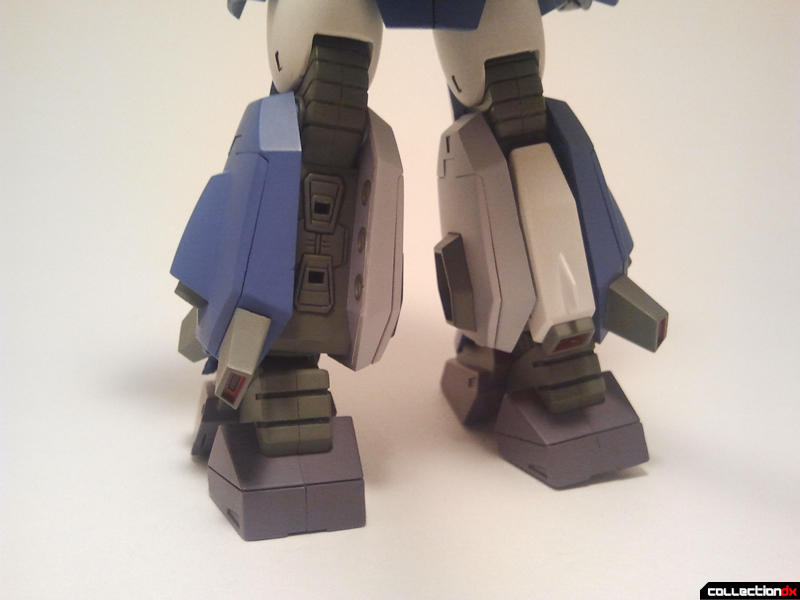 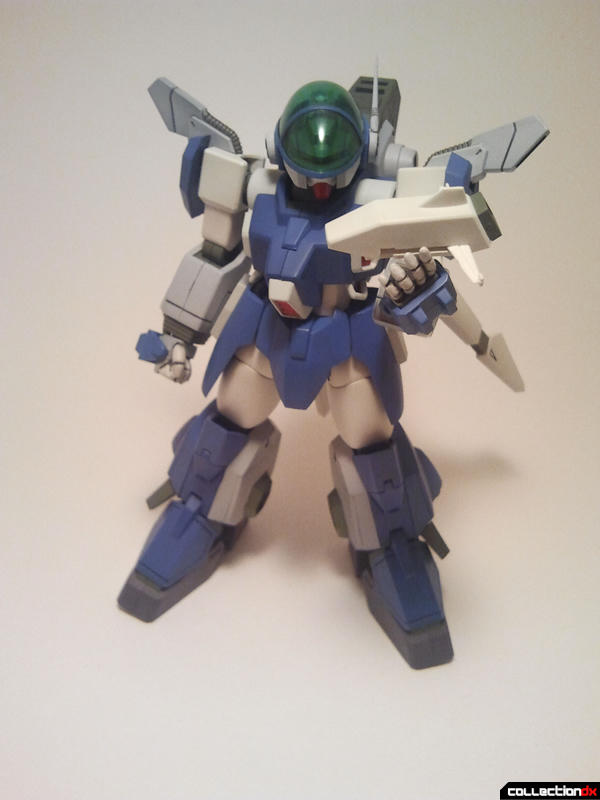 Layzner also has a jet pack. The jet pack is actually articulated and features ball jointed wings, and a pivoting thruster. The rifle can be stored on the side of the jet pack as well, although it doesn't fit too well. 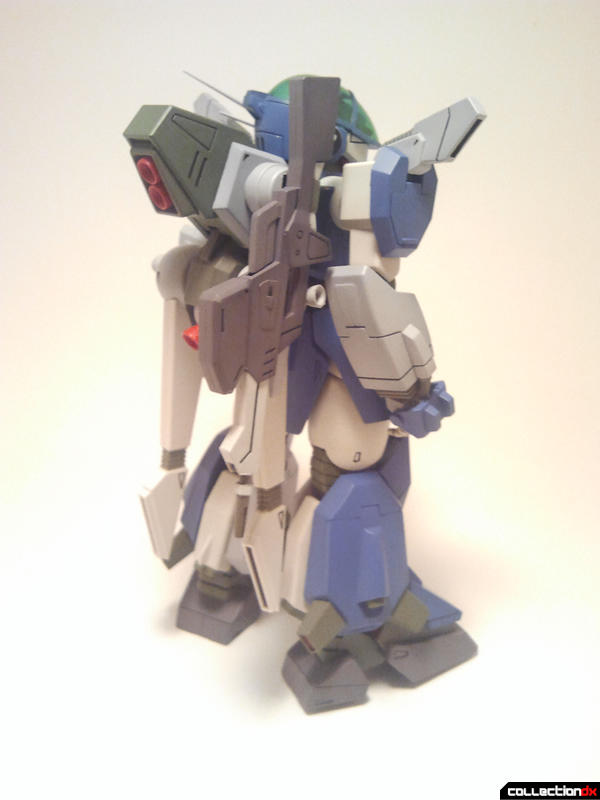 Aside from storing Layzner's rifle, this jet pack is capable of doing a whole lot more cool stuff. This toy comes with a few piece of extra equipment that Layzner didn't use in the show, including a grenade launcher. It just pegs right into the jet pack and now Layzner has a giant grenade launcher slung over his shoulders. 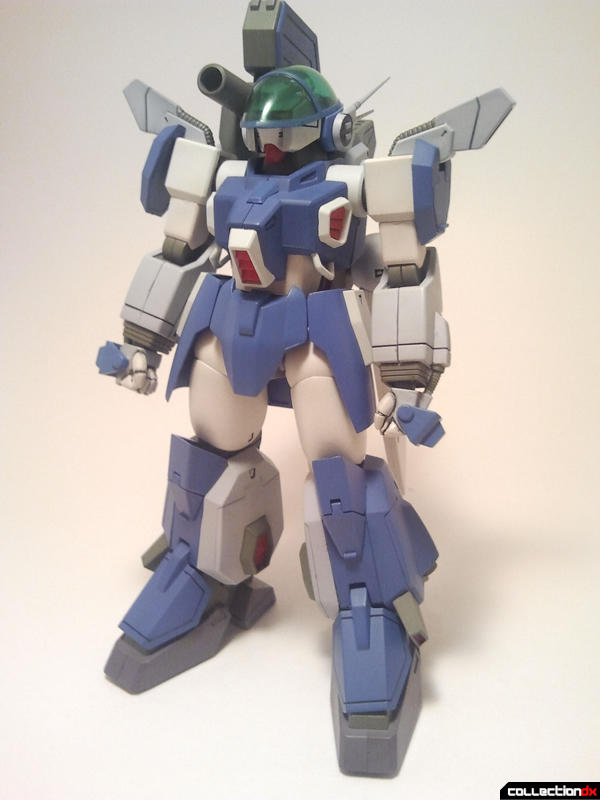 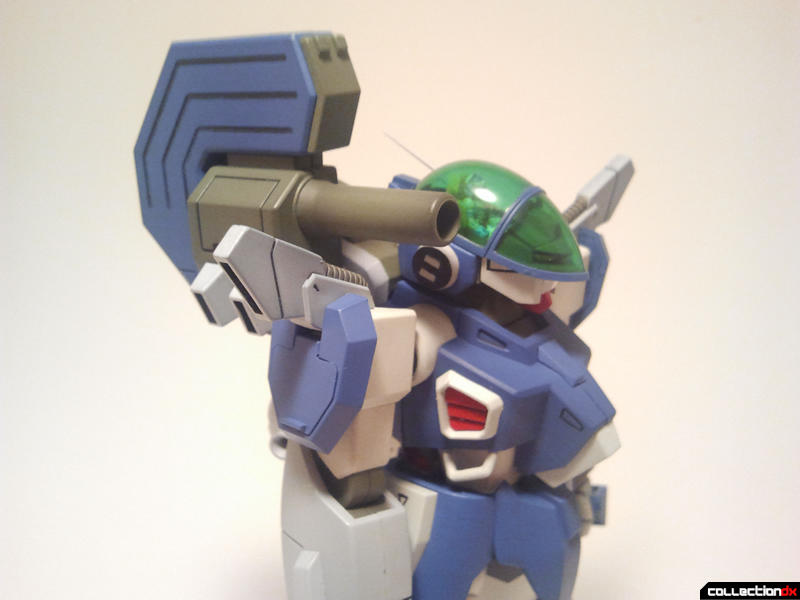 The other piece of optional equipment is an additional flight pack. These wing pieces peg in just like the grenade launcher does, and they are HUGE! The wings rotate and swivel at four different points and make these wings very poseable and fun to display. 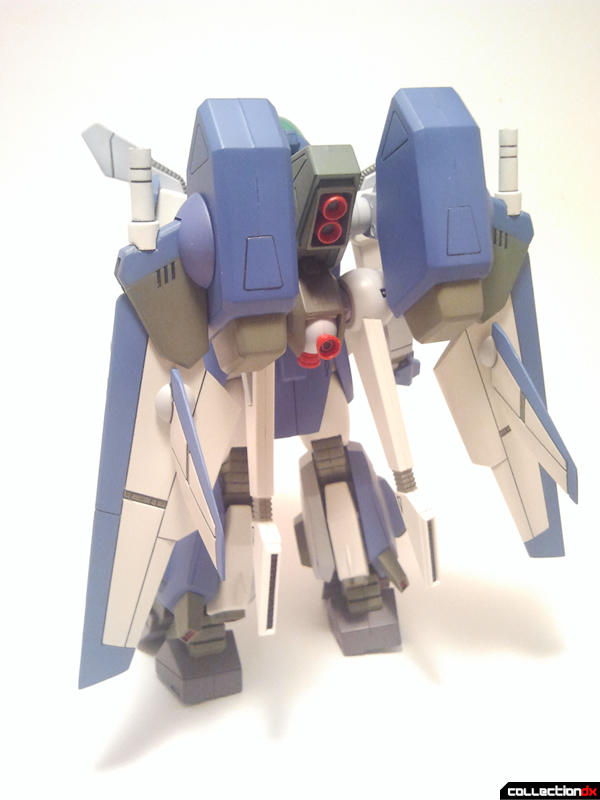 These wings are also very heavy and make it difficult for Layzner to stand up while holding them. Thankfully Kotobukiya also included a stand with the Layzner as well, with Layzner's name and a picture of his head printed on the base. 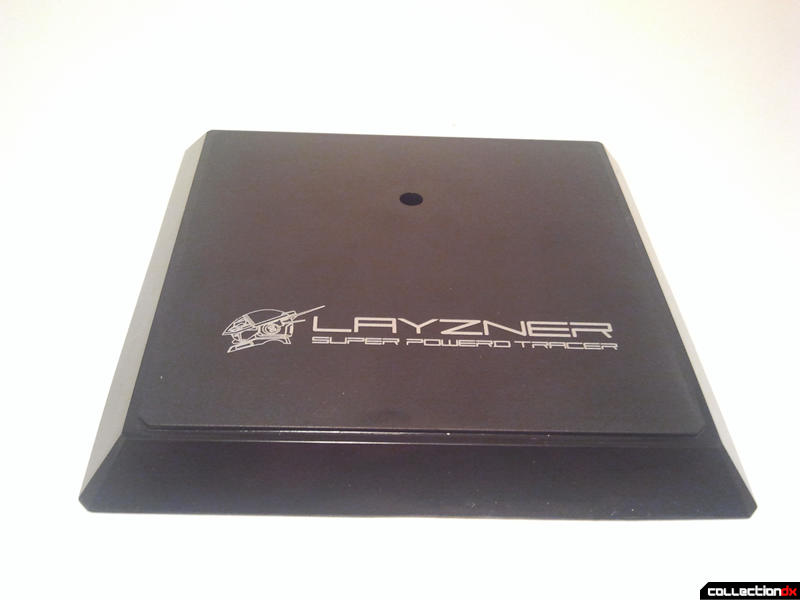 The stand is actually really awesome. It works a lot like a Figma or Tamashii Stage stand, with the three pivoting points. However this one uses ratchets in the joints so it's super stable in any position. 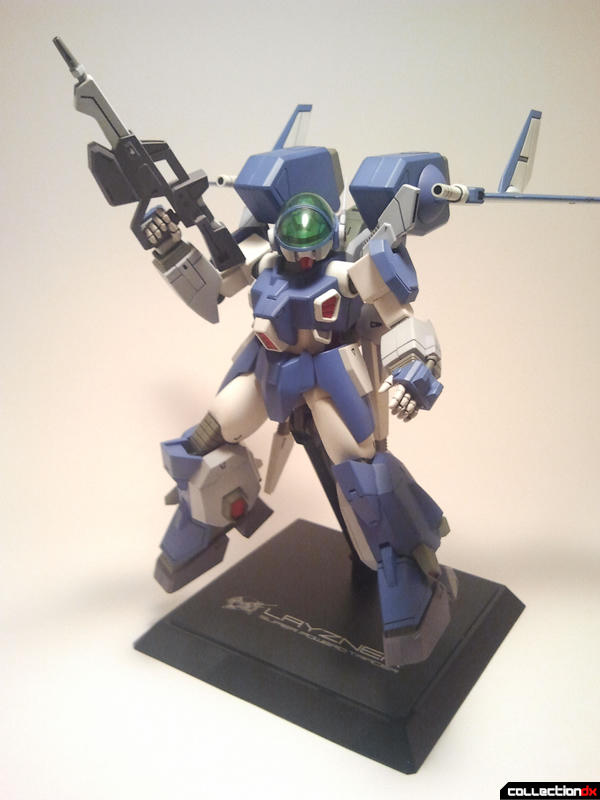 With the help of the stand, Layzner is able to strike all sorts of awesome poses. 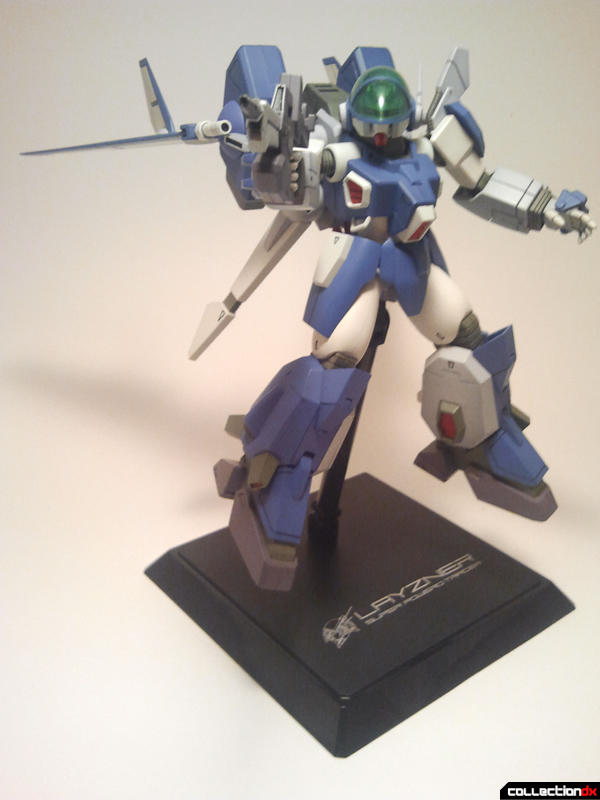 Layzner has a few extra features as well. One of Layzner's cooler abilities is that Layzner can flip these blue panels in front of his fists and is able to punch the crap out of other robots. Layzner's wrist guards can swivel down so he can fight him some robots hand to hand. 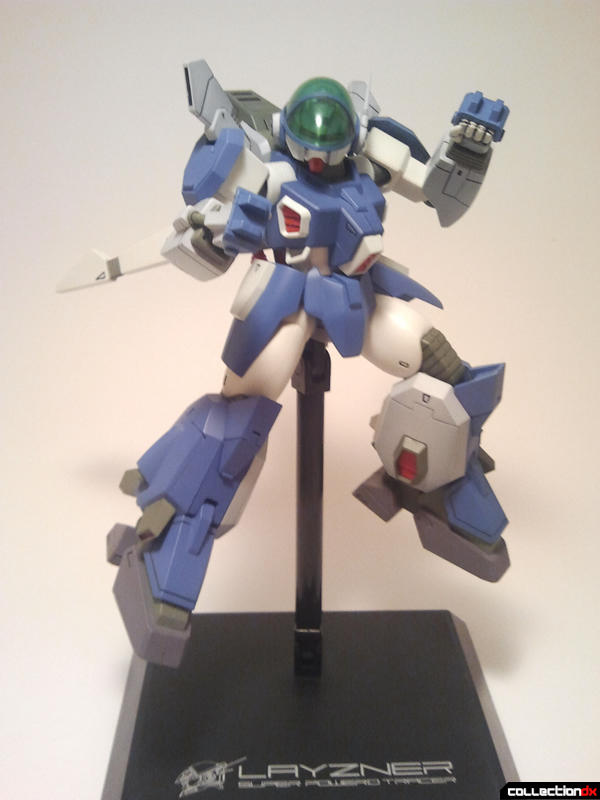 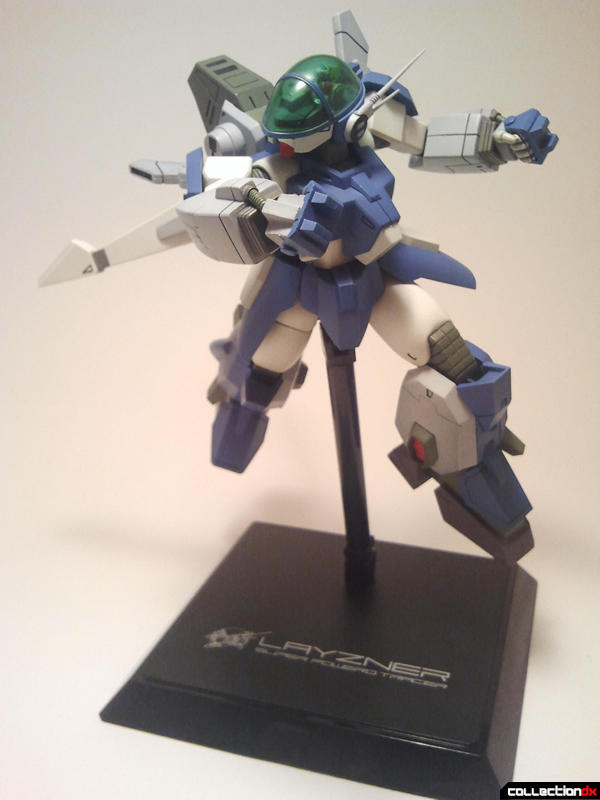 Layzner has one more feature. Layzner's ultimate attack is the V-MAX, where Layzner essentially moves really fast and crashes into all of its enemies. To mimic this, all of Layzner's various panels open up on his legs and arms. It's a small feature, but a nice extra touch that makes this toy stand out. 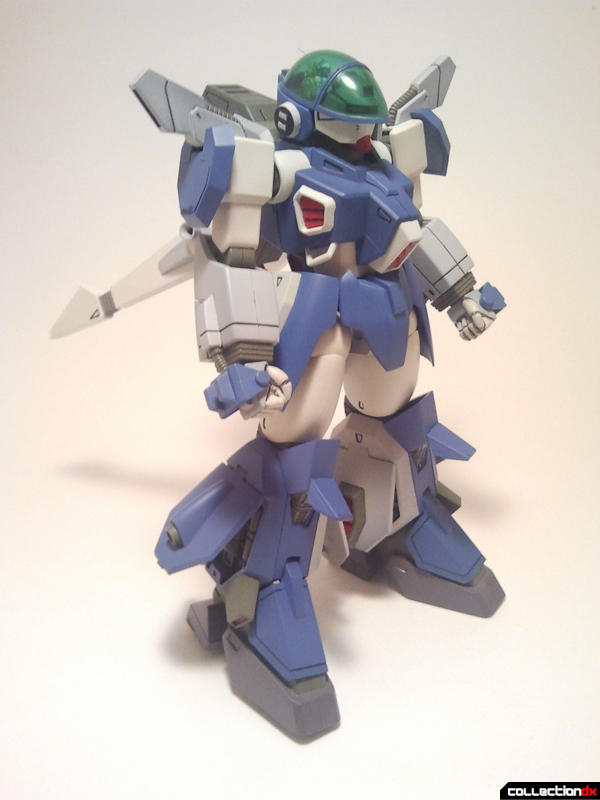 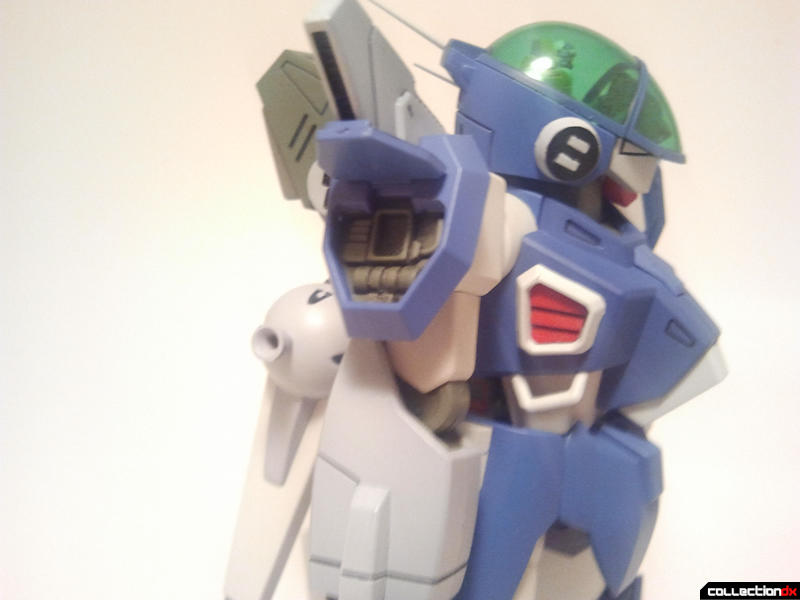 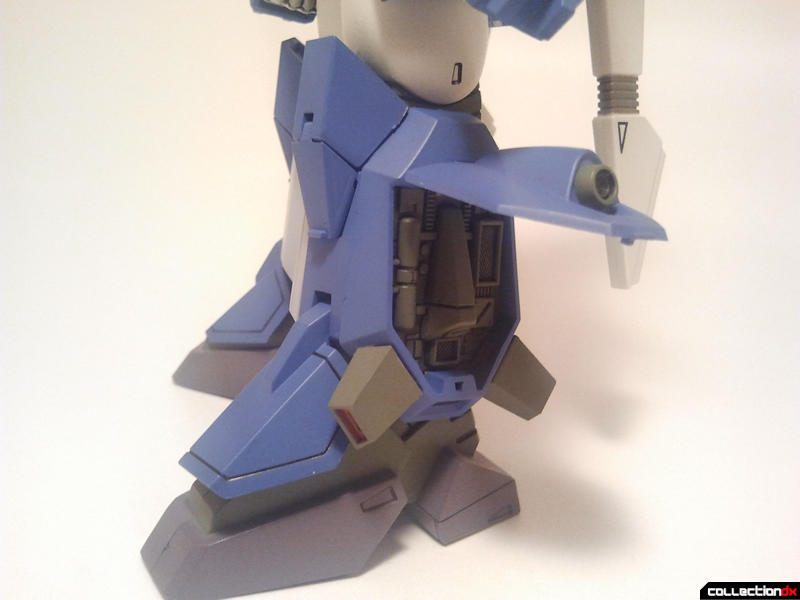 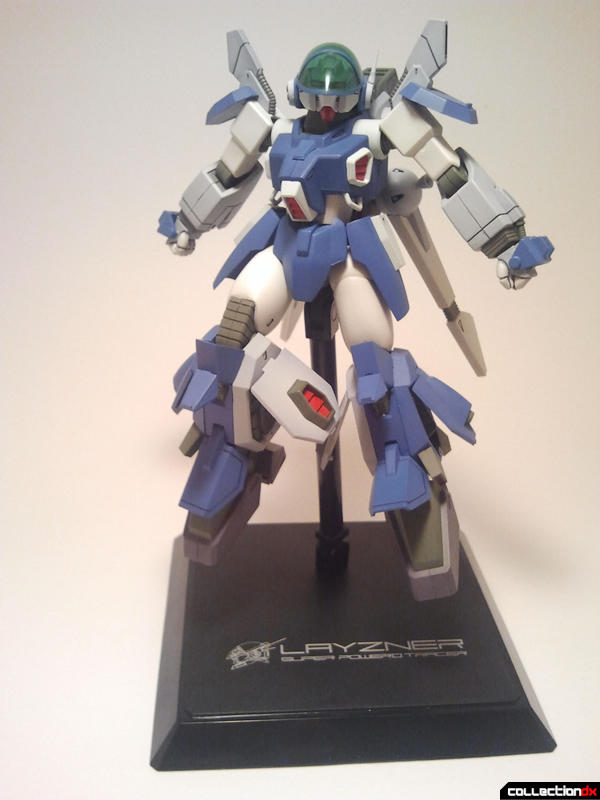 In many ways this is the toy of the Layzner that I always wanted when I was a kid, and in that regard I think that the Layzner is a solid toy despite being a few years old. The massive number of accessories and detail on the Layzner make it more than just another forgettable Layzner toy. If you think the Layzner is a neat design, Kotobukiya's S.U.G.O.I is definitely worth checking out. 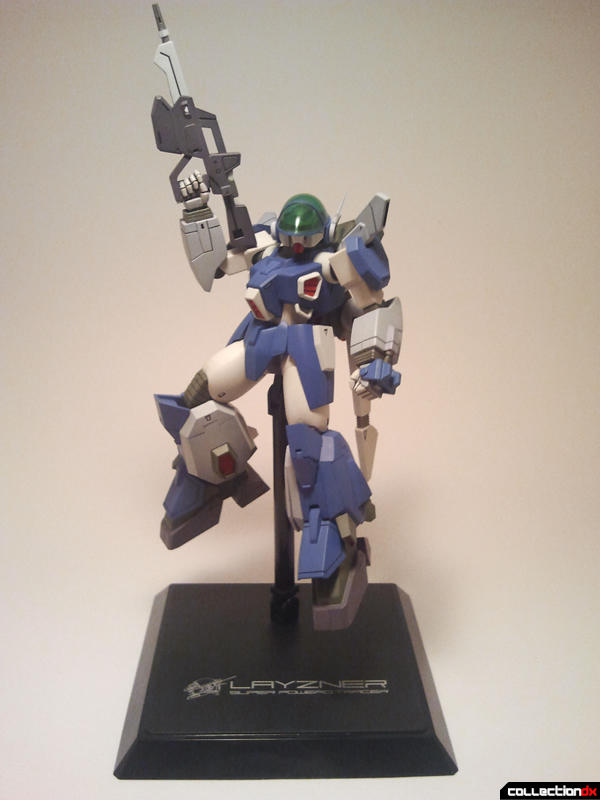 It looks like it jumped off the cells of a cartoon. I LOVE IT!

I have this guy. It's a fun figure overall.

Didya ever notice the base says SUPER POWERD TRACER :3

also this guy is great in the ACE games. Very speedy and its gun shoots lighting.

This is a great toy and seems to capture the essence of the mecha. Thanks for turning me on to this one!

I have the Bandai Tamashii SPEC toy of Layzner. I think they're about the same size, but the SPEC didn't come with the winged pack. It did however come with some extra armour to rebuild it into the Mark II Layzner, as well as an electronic talking stand, modeled after the navigation computer in the show.

The Soul SPEC version of this guy is something that's been on my list of things to track down. Although ideally I would like a Robot Damashii version of the Layzner.