The original Scopedog is one of the iconic designs of the Real Robot genre. It is stocky, functional, and just plain cool. While Chirico Cuvie may go through dozens of Scopedogs by the end of one season of Votoms, there is one variant that to me symbolizes the ultimate Scopedog. That variant is the Scopedog Turbo Custom.

Back around late 2005, Takara created a line of Votoms toys seemingly with the intent of competing with Bandai's own HCM-Pro Gundam line called Actic Gear. No, I have no idea what Actic Gear is supposed to mean but the hallmarks of the line include ABS construction, lots of extra bits on sprues, and general feel of Bandai's original High-Complete Model line. That is to say, these guys are a lot like pre-built models with some of the durability of a toy. 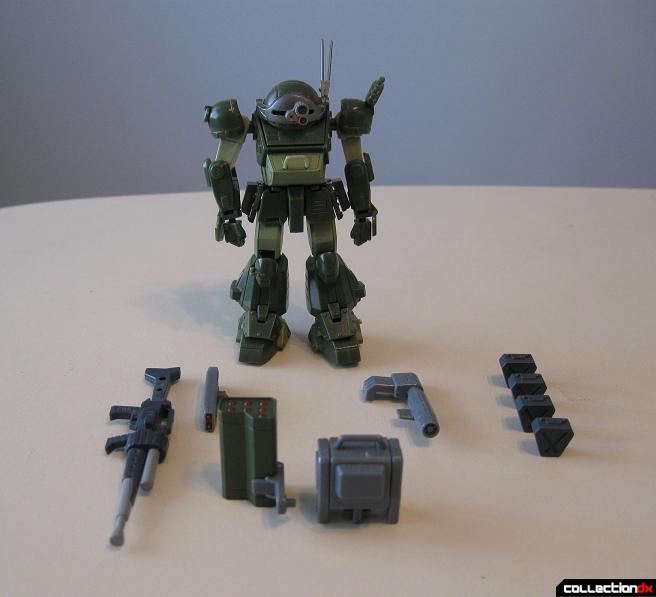 The ATM-09-STTC Scopedog Turbo Custom has everything you loved about Chirico's famous Red Shoulder Scopedog. It comes complete with the Scopedog's trademark GAT-22 30mm rifle, shoulder missile pod, two-shot waist missile pod, waist mounted gatling gun, and a backpack for mounting the missile launcher. It also comes with five ammo cartridges (four pictured) for the GAT-22, which can be mounted on the Scopedog's hip armor and on the backpack. 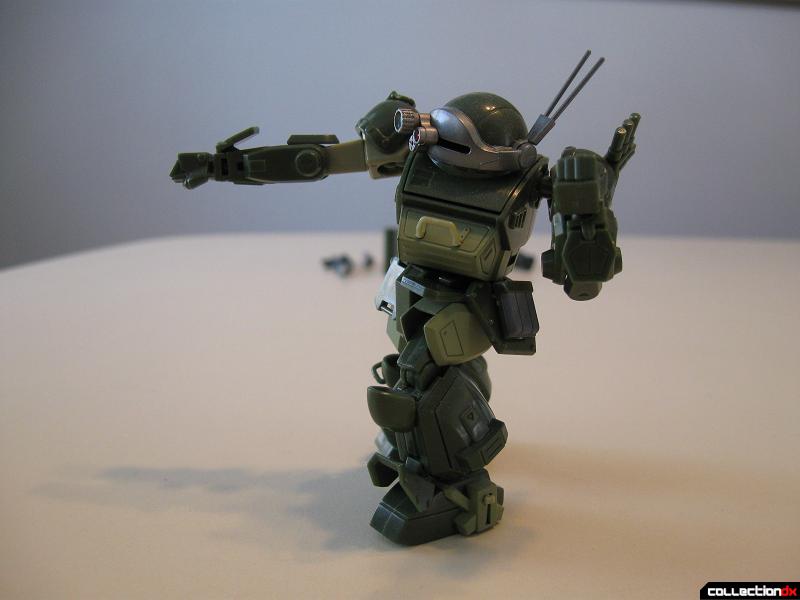 At 1:48 scale, this Scopedog stands around three and a half inches tall. Despite its small size, it is fairly poseable and can achieve a good Arm-Punch pose with the forearm extended. The Scopedog comes with two fists, two open hands, and two hands with the handle of the GAT-22 rifle. The rifle has a normal handle so that it can be used out of the Scopedog's hand. 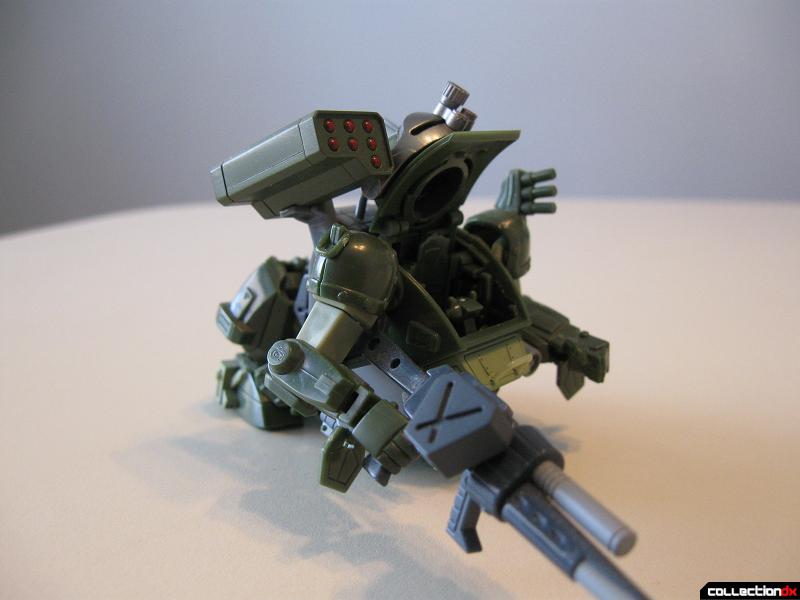 Like any good Scopedog toy, it can achieve "Down-form." The mechanism locks in tight so there is no danger of the Scopedog going into Down-form unless you want it to. It features a working cockpit hatch with a sparsely detailed cockpit. The most annoying thing about this is the control column, which does not stay in its socket. 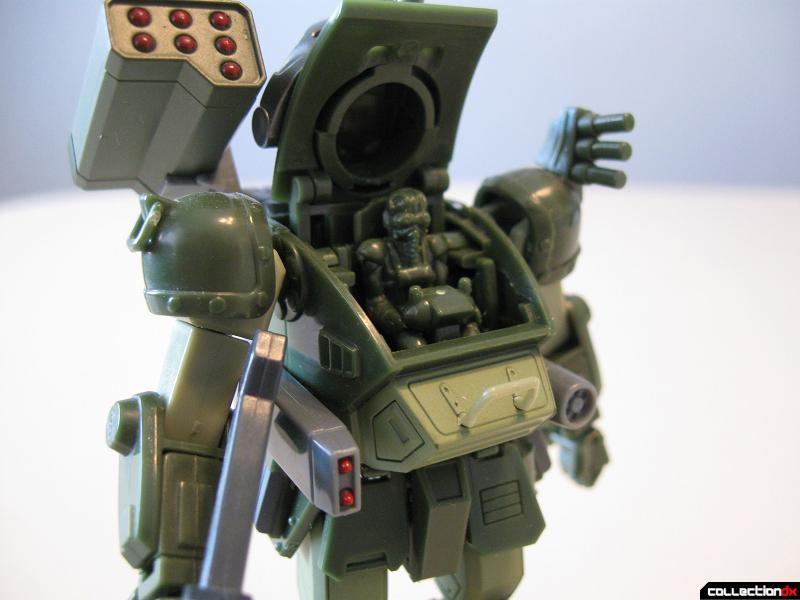 The toy comes with a scale Chirico Cuvie. The figure is unpainted. He is mostly there just to fill space. 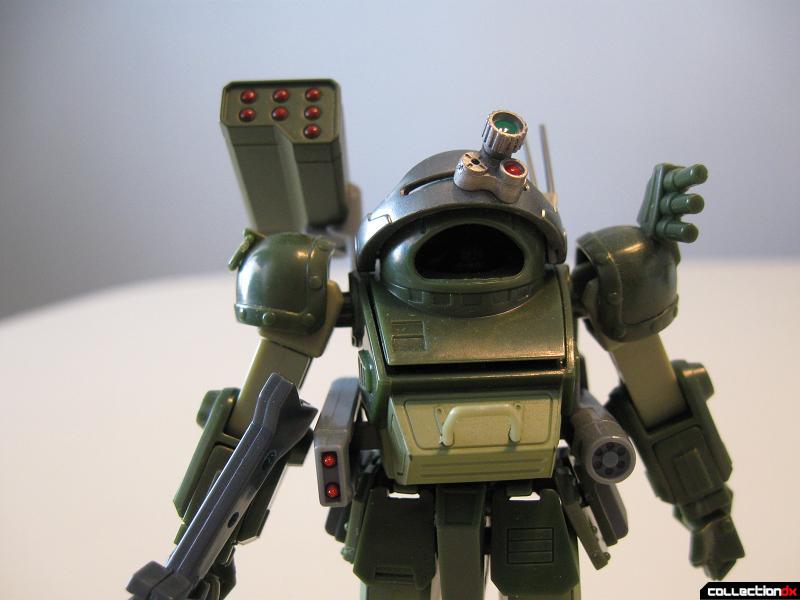 The visor can be raised up, just like in the show. 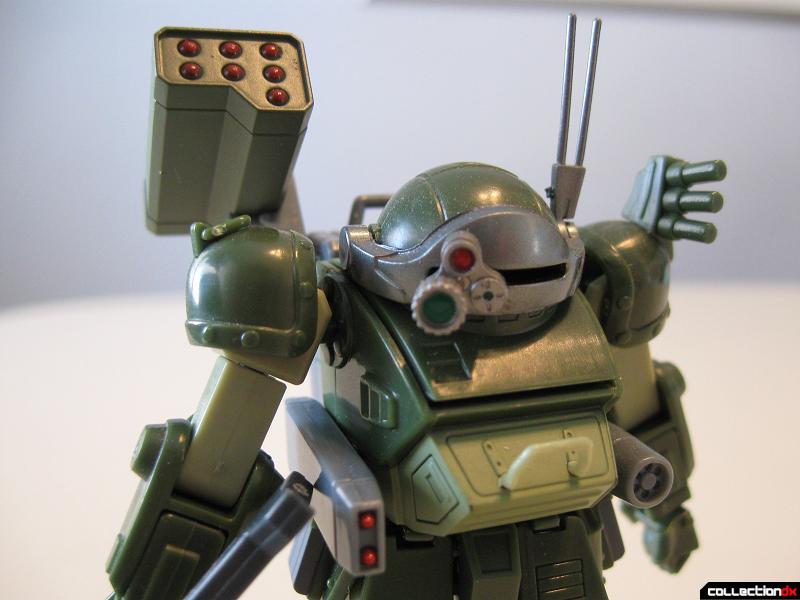 The Scopedog's characteristic camera eye can be swiveled left or right and can rotate. Unfortunately, on my toy the eye is a little loose and large lens tend to rotate the assembly downward. 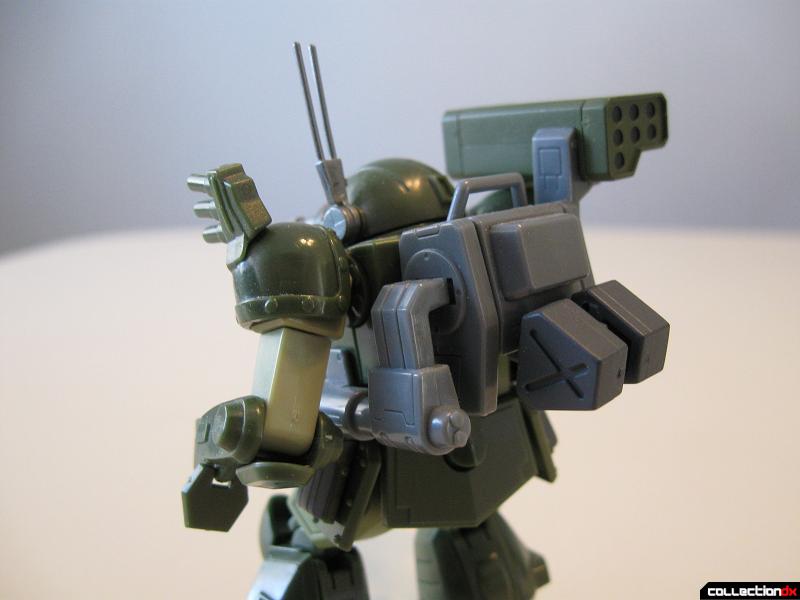 Here you can see the ammo mount on the backpack. It allows the Scopedog to grab the cartridge and to achieve Down-form. 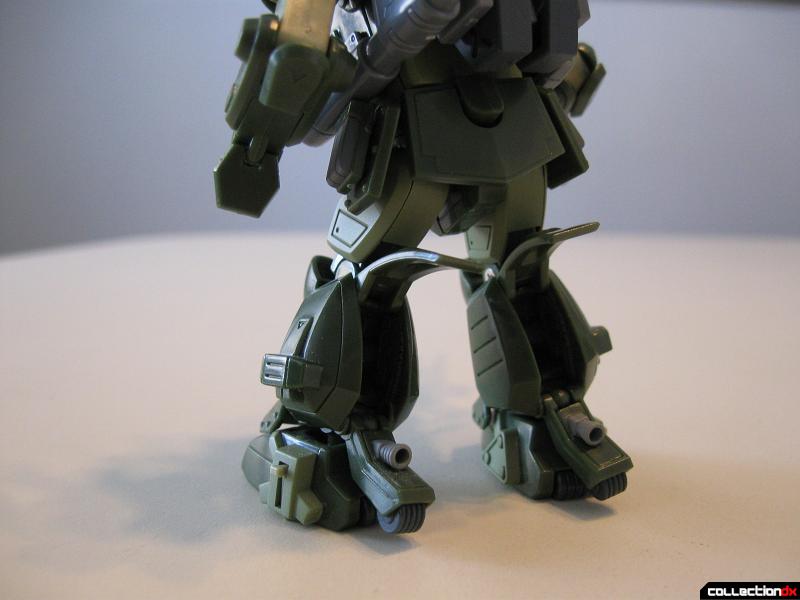 What makes this Scopedog a Turbo Custom is a new set of lower legs that feature one of the greatest inventions in science fiction: rocket skates. In this toy there are hidden within the lower legs under an armor flap. The existence of this flap does not interfere with the knees, which is a nice touch. 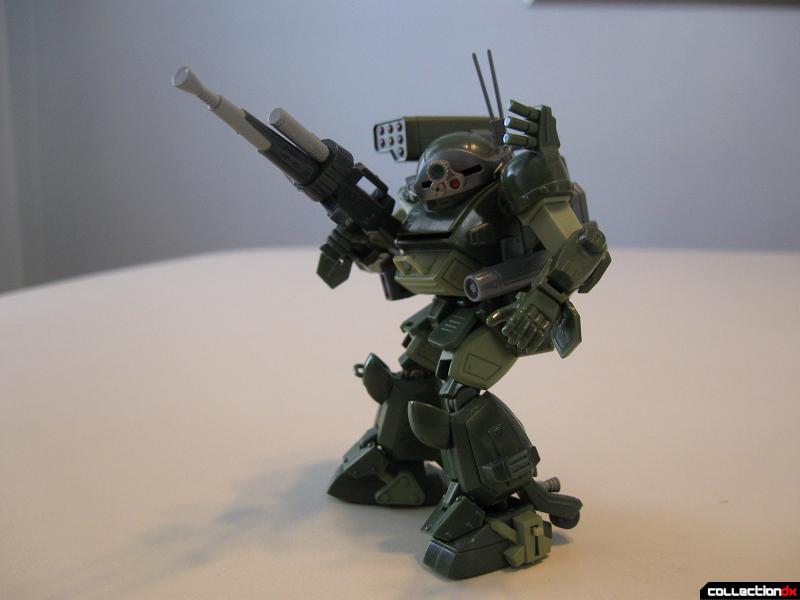 If you've ever played the Armored Troopers Votoms game for the PS2, you'll know that these little rocket boosters allow the Scopedog to zip across the stage like a dragster. Here you can also see the Scopedog's Turn-picks, which can be extended. Also the roller on the back of the Scopedog's foot can rotate, although the one one the rocket skate does not. 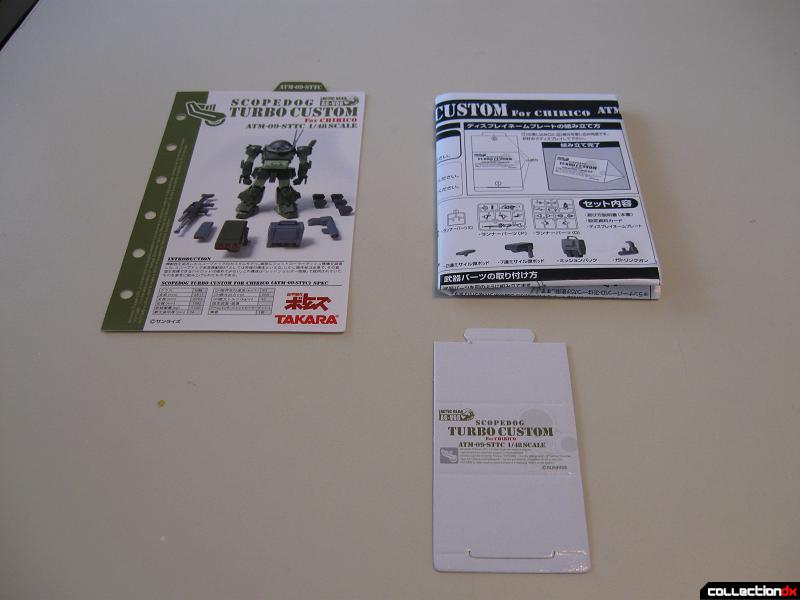 This toy comes with an instruction manual, a little card detailing the Scopedog Turbo Custom and its role in the Votoms OVA "The Last Red Shoulder," and a cardboard name tag. Not pictured is the three sprues of parts. These include the GAT-22 rifle, the optional hands, the belly bar, and the pilot figure. 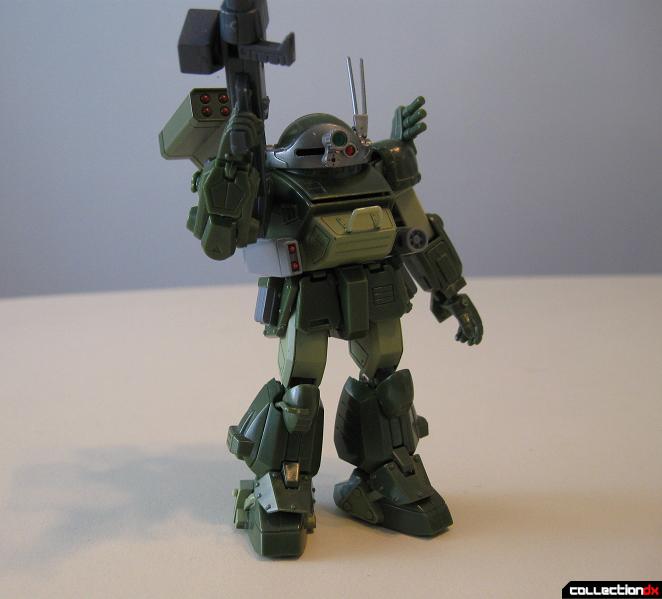 Overall, the Actic Gear Scopedog Turbo Custom is a nice little toy. It was intentionally designed to feel like a model and its ABS body invites you to give a custom paint job. Sadly, it does not come with any decals. This figure has been re-released at twice the price and comes fully painted. This first release is out of production, but it is probably the best value out of all the releases. This is probably favorite Actic Gear out of the few that I own, and served as a good holdover before Yamato released their massive 1:12 scale Scopedog Turbo Custom.