To close out the first wave of Mattel & DC's new joint venture (circa 2006), we've got their best figure yet, the Scarecrow. 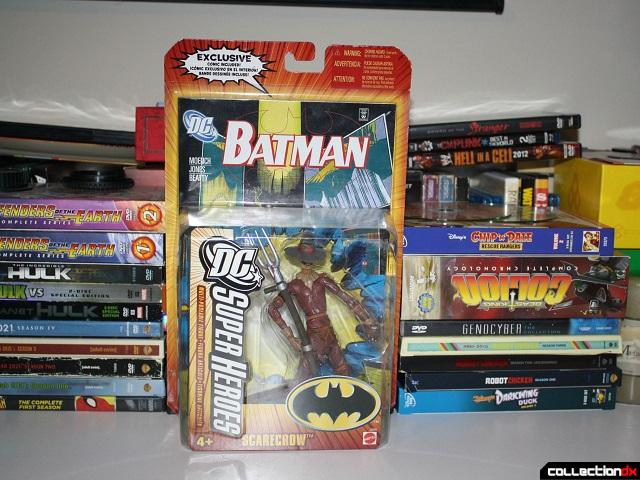 Scarecrow thinks he has it bad, but there are worse fates in life than being a Batman villain. At least he has a fighting chance. Not like the goons from that franchise in the background. 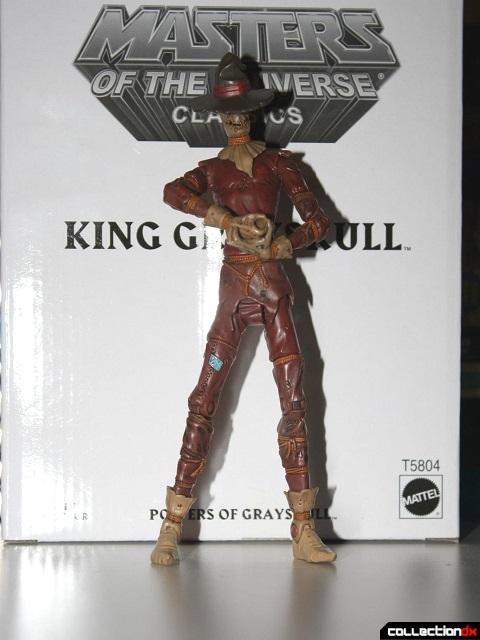 Cillian Murphy did what he was supposed to with the part he was given in the Nolan trilogy, and that's fine and dandy. But if you really want a taste of Jonathan Crane, you'd do well to check out the comics or the animated series.

Scarecrow looks like a skinny creep, but that suits his purposes just fine. His ankles hinge, and his feet swivel just above his boots. His knees also hinge pretty far back. 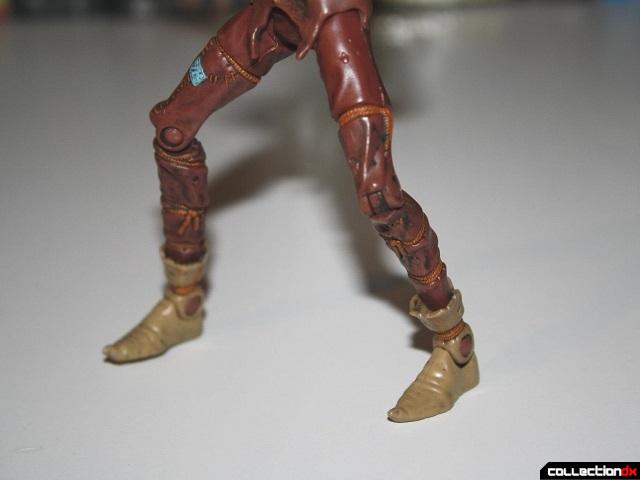 The sculpt is pretty detailed. He looks like a man covered in the rags of a scarecrow, just as dirty, rundown, and everything else you'd describe such a thing as. 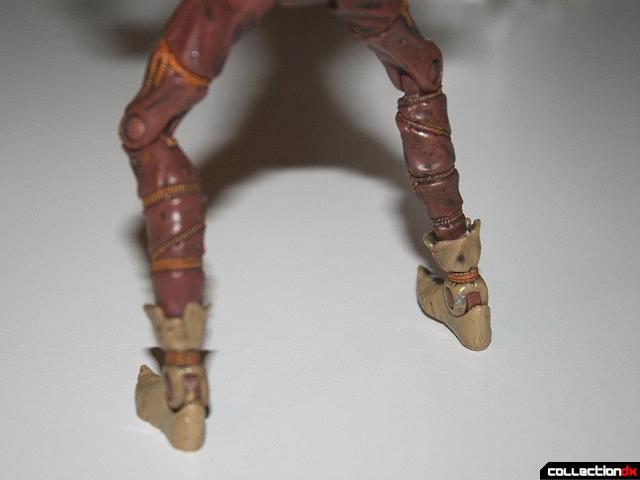 The bottom of his top is stiff, but it has some give. And what was a first for me with any toy, he has both a swivel waist joint and another swivel joint, set in his abdominal region. The only other figure I have with a similar design is ToyWorld's Hegemon (G1 Megatron). 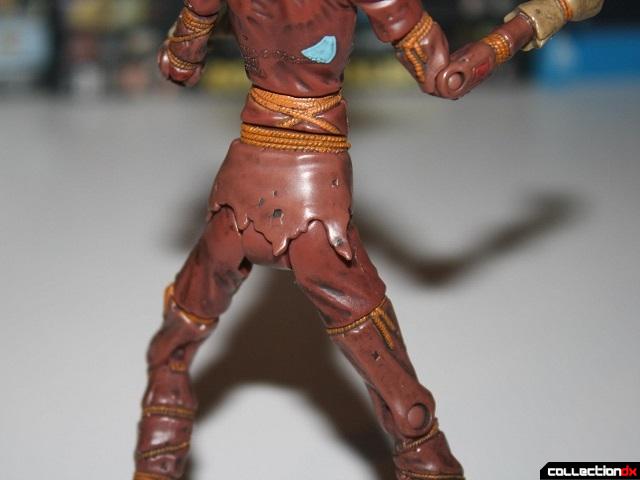 His upper legs swivel below the hips, and his hips are ball-jointed. This is great and helps a lot, but his front and back range is limited by the bottom of his shirt. 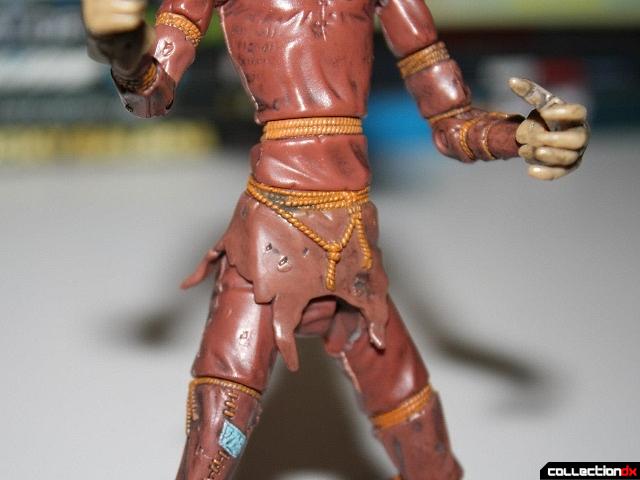 His shoulders are ball-jointed and light enough that it's easy to turn them over. His elbows hinge, and his hands swivel at the wrists. 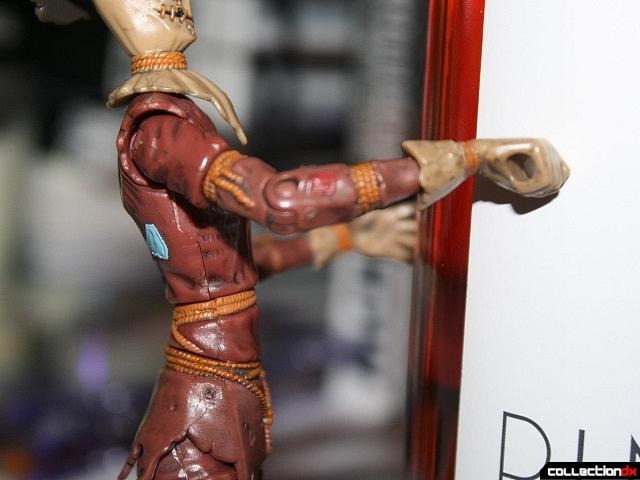 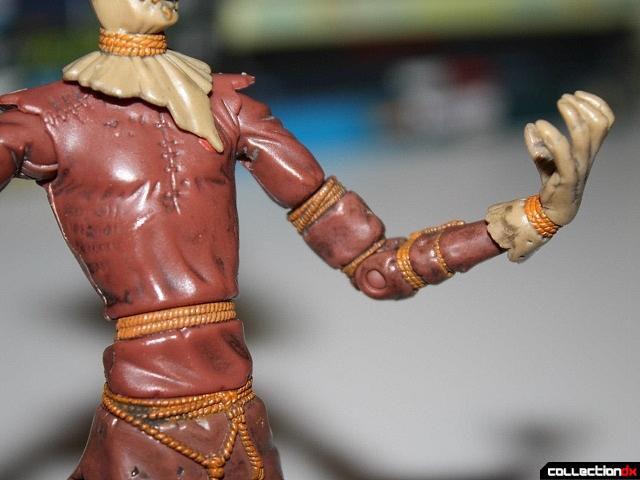 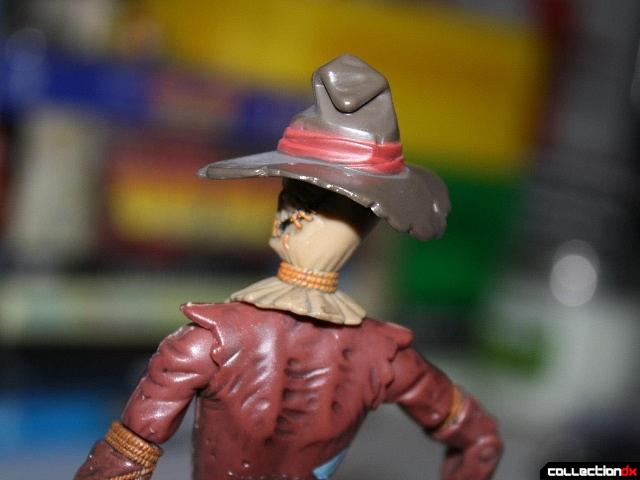 I'm sure it's just stitching holding his mask together, but it does look pretty gruesome. 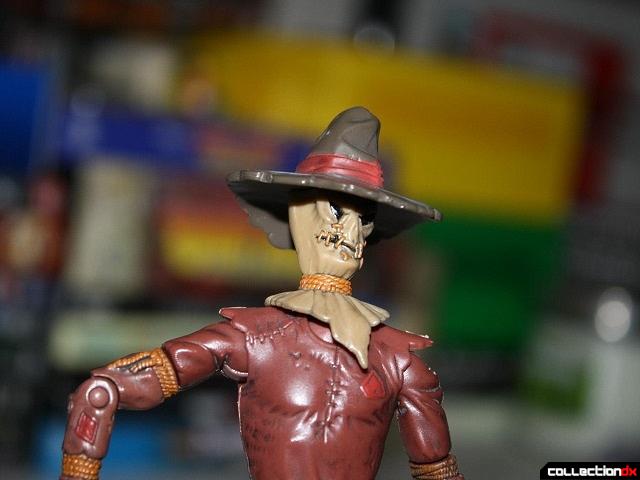 On paper, his gimmick is pretty simplistic, but Scarecrow really is the master of fear, and he's good at what he does. He certainly owns the gimmick than the Marvel version. Come to think of it, every episode of the Batman animated series that featured him as the villain is excellent.

If you haven't already, be sure to look up "Nothing to Fear", "Fear of Victory", and "Never Fear". 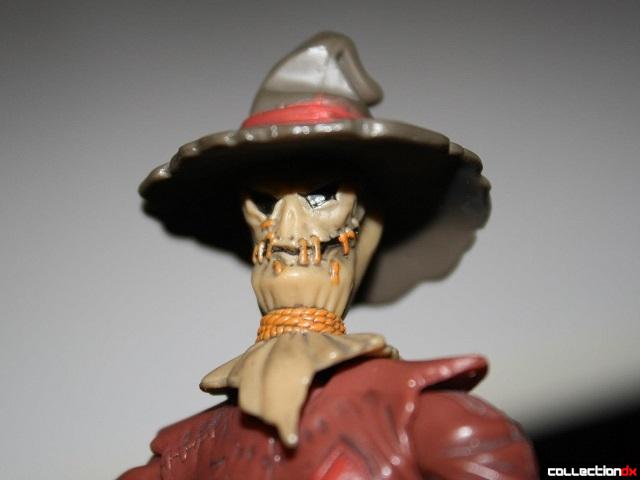 I think this thing is called a scare-globe or fear skull or something. Basically just a portable device for carrying whatever fear toxin the Scarecrow is using at the time. For something so small, it has a lot of detail on the electronics. I just wish it had a little more paint applied. 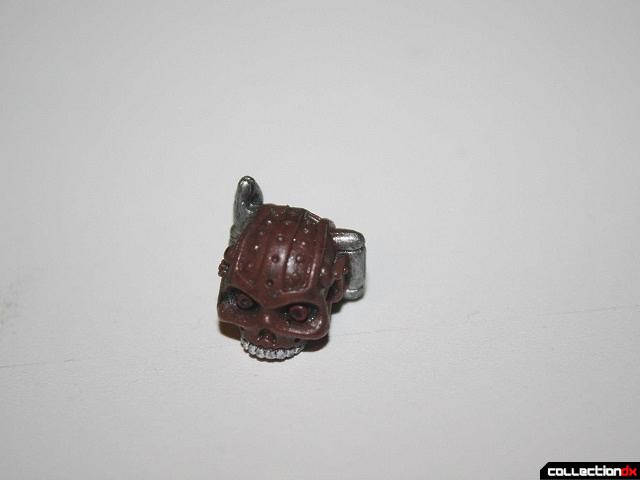 I'd never seen it before opening this toy up, but it's also featured in the included comic reprint. 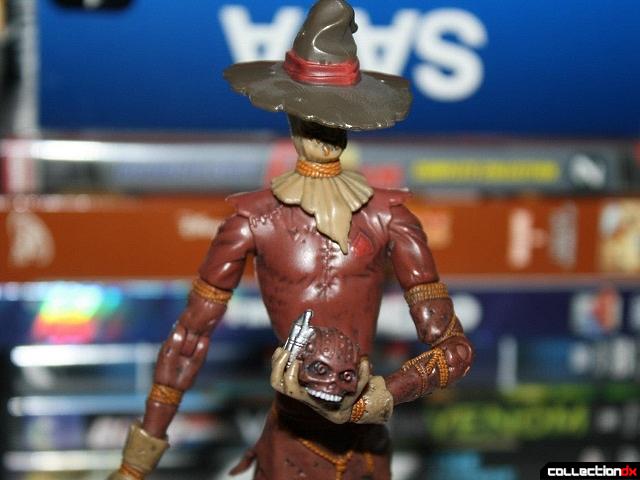 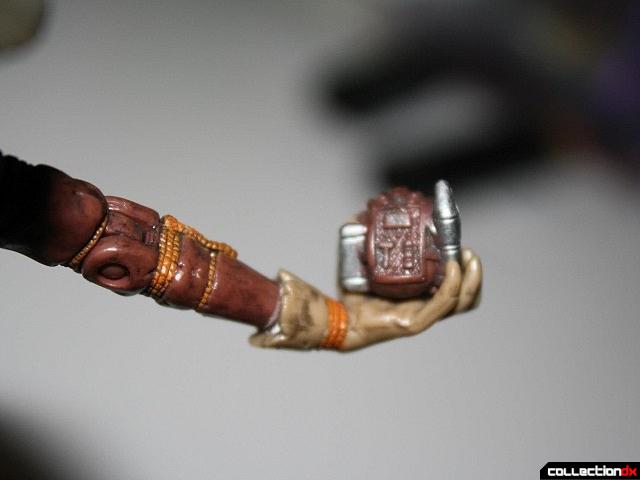 For some reason, I look at this and hear that banjo tune from Deliverance. 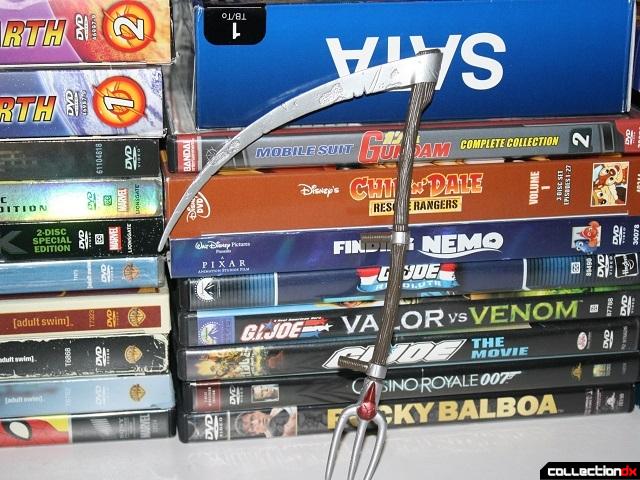 The metal fatigue on the scythe adds to its threatening appearance. Unfortunately, despite Scarecrow's solid articulation, the weapon isn't easy to wield. 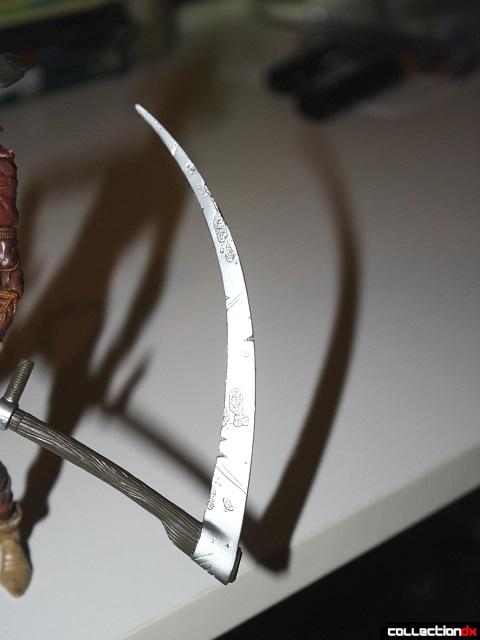 The pitchfork half is a little more accessible, but the weapon suffers from being one solid piece. It'd be a lot better if the grips could be moved. 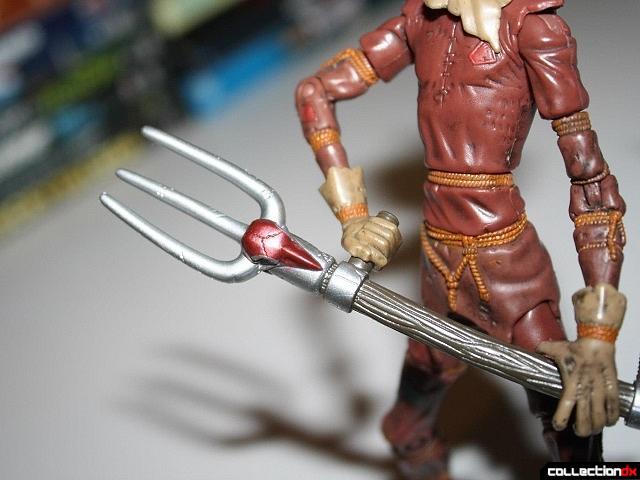 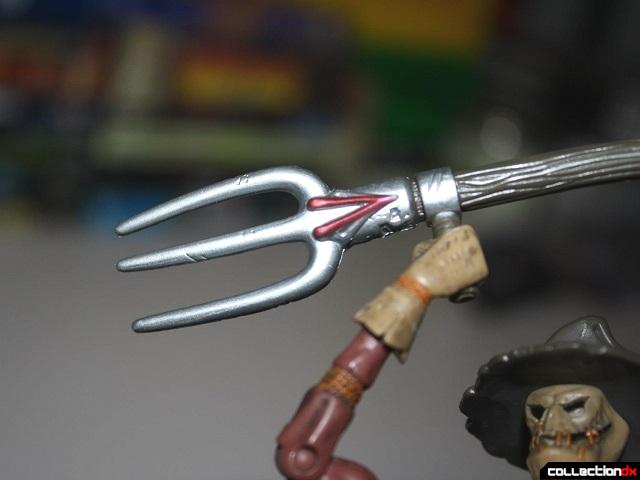 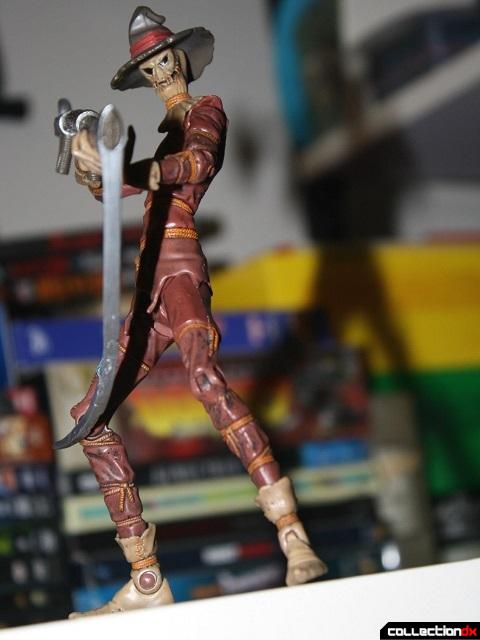 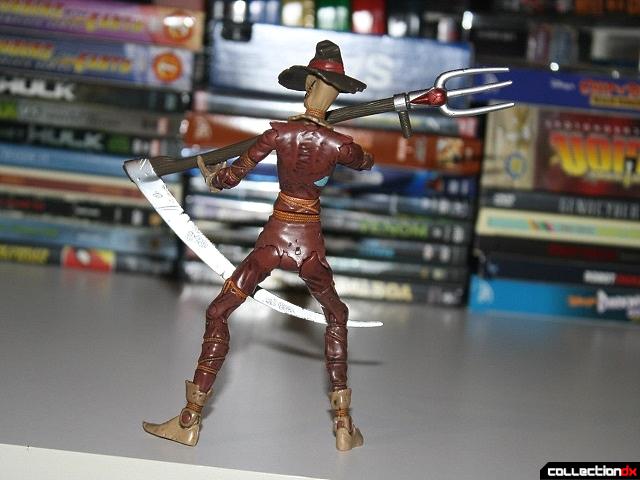 It's 3-on-1, but Batman would still beat them all down in less than 2 minutes. 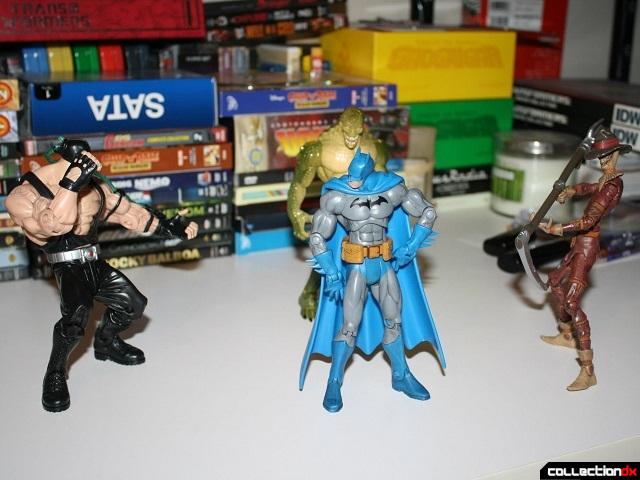 Batman #524 dropped in November 1995. It's the 2nd half of a Scarecrow two-parter, not too long after the Knight Saga, but a ways before No Man's Land. Not bad, but not special either. The art kind of looks like Sam Kieth, but it's actually penciled by Kelly Jones. So there's that. 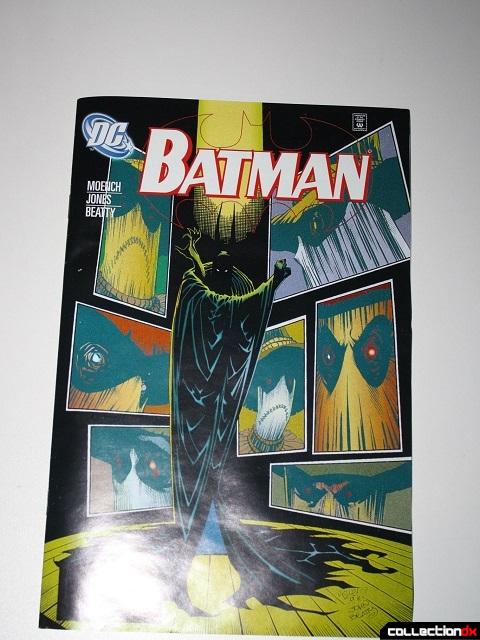 I'm surprised the Scarecrow is the best toy out of this lot. Then again, the villains have to win every now and then. I wish his weapon had rotating parts, but otherwise there's nothing really wrong with him. Since his release, I think the only other Scarecrow figures have been the Sinestro Corp version from Classics and the ones from the Animated Series line, making this the only comic-esque Scarecrow. Not sure if he's worth $40+ online, but if you can luck out and find him in person for $15 like me, he's a good addition to the comic book ranks. 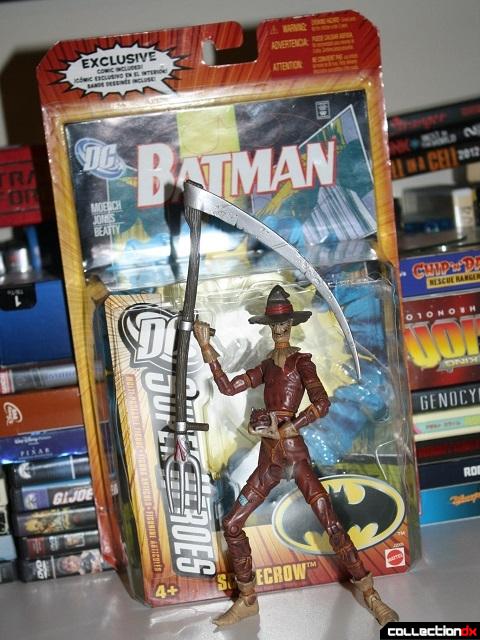 In retrospect, given that extra torso swivel, I'm a little surprised that they never repurposed at least the torso here to produce a Ragdoll figure.

I'd say "never say never", but they don't have a really diverse toy line at the moment, so who knows. Maybe he'll get a DC Direct figure some day.