Busou Shinki is the brainchild of designer Asai Maki, who also created the Mecha Musume series of trading figures. his collaboration with Konami has resulted in the first poseable action figures of his designs. While the first two were designed by Asai Maki, this one is designed by someone called BLADE. 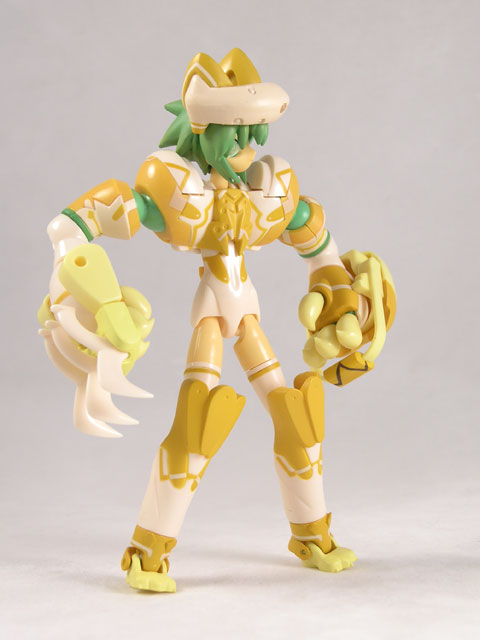 Busou Shinki (武装神姫) is an action figure line from Konami that has an on-line element. Each figure comes with a code, that when entered on the official website, will enable that toy in the virtual world. From there you can customize your figure and battle other figures. The on-line game started September 7, 2006. 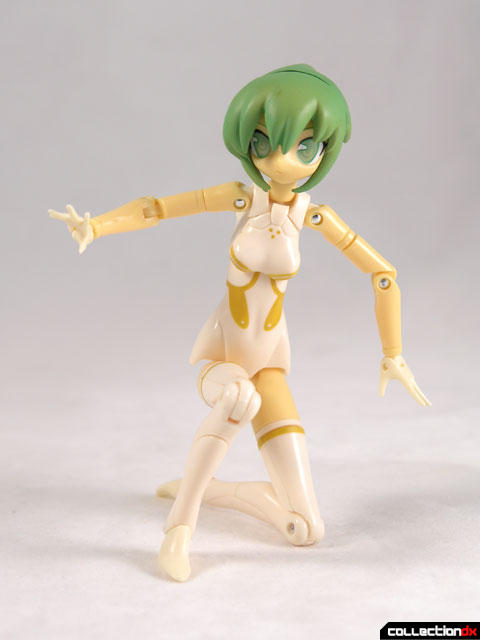 MMS Cat Type Maochao is a radical departure from the harsh military lines of the Devil Strarf.. She’s a cute young girl with a suit of battle armor that has the properties of a cat. There is also dog-type armor in the line.

The packaging is a beautiful box with a cover sealed with Velcro. Inside the cover is a nice clear window that displays the figure in its tray, as well as some great shots of the completed product.

It seems like there must be 100 parts included with this toy. There are two trays full of little accessories, and not all of them are obvious as too their uses.

The figure itself has an almost identical body to the other figures. The head is of course different, with a removable front section. The limbs and chest are removable as well. What sets this figure apart is the armor; it has an interesting and initially frustrating attachment method. For the chest armor, you actually remove both arms and enclose the upper body in an armored case. From there you add on new arms that attach to the armor, not the body, via a confusing ball joint. The arms have an interesting range of motion, with dual ball joints and a fixed elbow. It limits articulation somewhat, but you can make do. The default hands are cat’s paws, which can rotate and have articulated fingers. You can attach add on armor to the arms. Included in the set are:

The legs separate mid calf and the Maochao armor slides on easily. Each armor piece goes on a specific leg. The feet are small, and it’s hard to make the figure stand up. Each foot has a small support on the back that can help it stand.

The head has a replaceable front hair section that can be swapped with an armored unit. The fit here is not perfect, as I always seemed to have a gap. Also, this hair unit cannot be swapped with the dog unit for some reason. Behind the head on the armor is a peg for attaching one of the 5 cat heads, called Petie Masinz (?) (プチマスィーンズ). 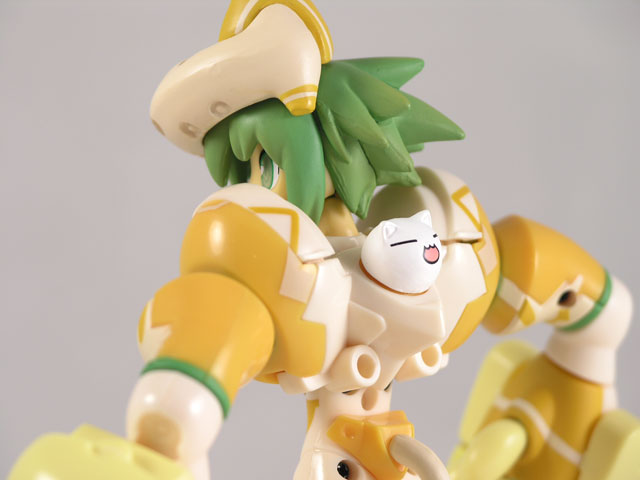 I assume these cat heads grant the armor different abilities. The cat heads also have their own mini-vehicles that they can merge with when not attached to the armor. 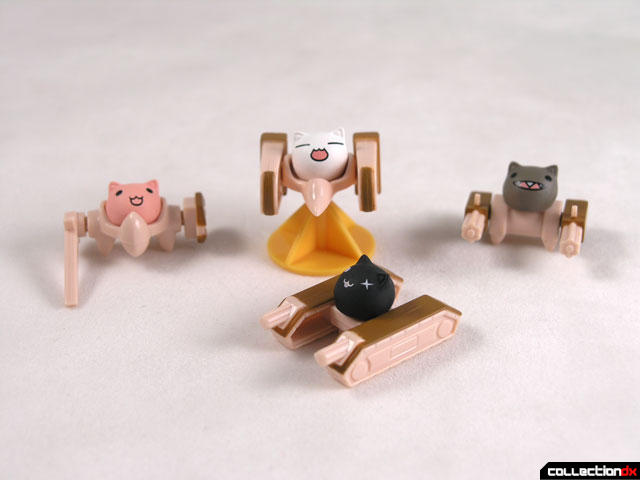 Finally, like any good armored catgirl, Maochao has a tail! 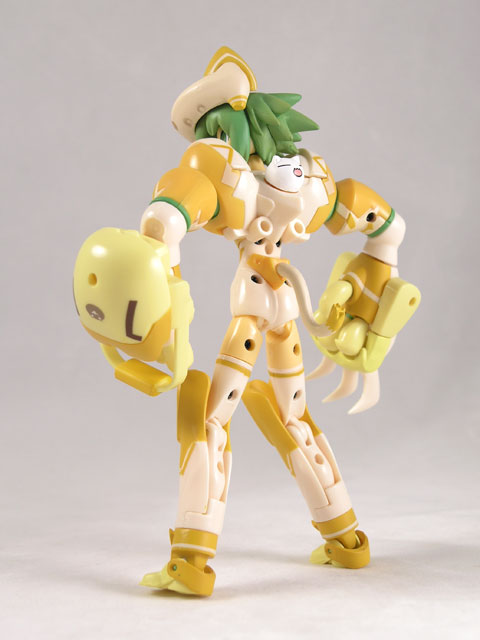 The display stand here is the same as the other stands in the line, but this time you have two different connectors on the end. One connector is for the figure without the armor, and one is for the armor. The stand has to be assembled, and there are a few small Phillips screws. 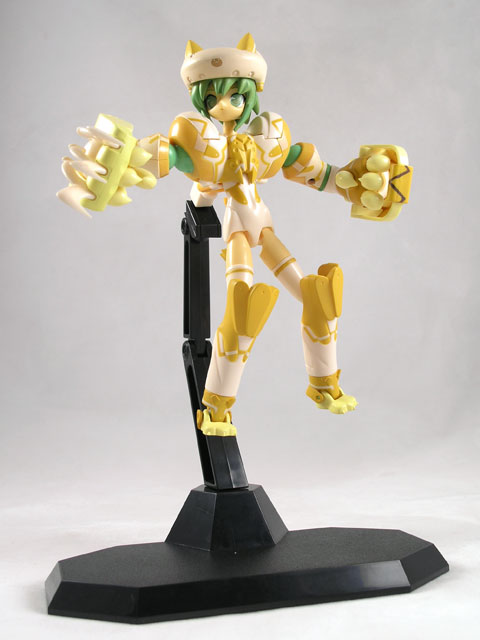 Also included in the set, but not initially used are some connection rings. These rings go between the limb connections and enable you to add on armor at various places on the figure. You also get four green male to male connectors, which you can use to join parts that have female-type connections. With these connectors, you can make a variety of insane creations with the other figures in the line. 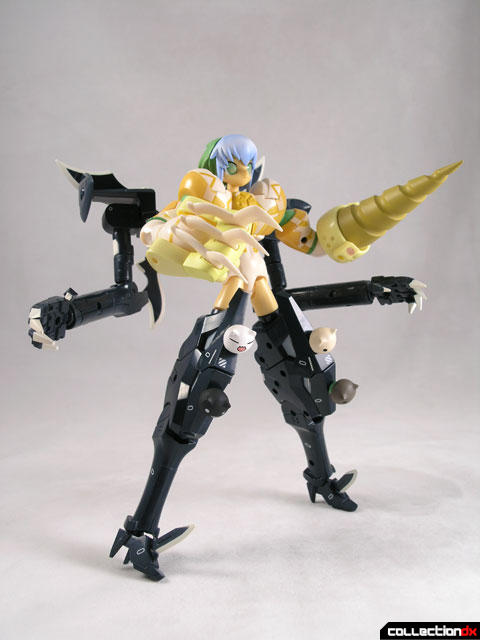 Overall, this is a fun line. Initially I was taken back by the change in the armor, but now I accept it as just another facet of the line. The legs are much tighter this time, but the head is still a bit loose (if you hold it by the head the body will fill off). I’m a little disappointed in the fact that I got the wrong accessories packed with mine, but the parts look so much alike, I can understand the mix-up. I don’t think I will return it, but it’s worth keeping an eye on this as the line progresses.