This is a review for the 1/7th scale Kanu Uncho figure from Yamato's Story Image Figure Ex line.

This Kanu Uncho is one of the best looking figures in my collection, and is also one of my favorites.

Kanu Uncho is one of the characters in the anime Ikkitousen: Strength Of A Thousand (Battle Vixens in N. America). For 1800 years the 7 schools of Kantou have fought over supremacy of the land. Their students constantly fight each other in battles to prove their strength. Sonsaku Hakufu is a 17 year old girl that just transferred to Nanyou Academy, and at her arrival, finds herself fighting one of its top 4 fighters. But Sonsaku possesses a soulstone which contains the spirit of a great fighter, and she is not an easy match. When an order is issued to defeat Sonsaku, she finds herself in all out war against all of the schools top fighters. What lies behind this dark conspiracy?

Ikkitousen is a nice watch, although the story is a little so-so. It's got some very nice fight scenes, and of course when we're talking about an anime with fighting girls, it's not far off that we get a lot of gratituous fan service shots. 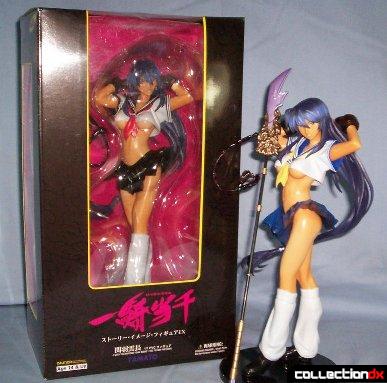 The Kanu Uncho figure comes in a black window type box measuring 6.75in x 12in x 4.75in (L x W x H). This gives you a good view of the figure from the front and both sides. The back panel has a large picture of the figure itself.

The box contains a single plastic tray that houses the figure, display stand, and weapon. 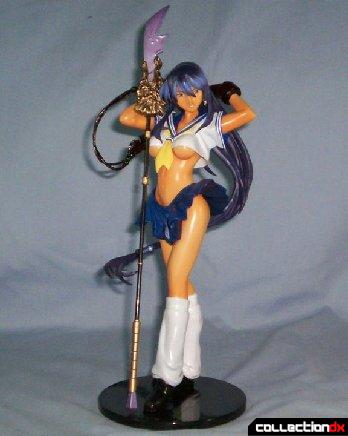 The Kanu Uncho figure stands at 9.75 inches from the base to the top of her head. It's made entirely of PVC plastic which makes it a sturdy display. Let me clarify that this is a static display piece. It does not have any articulation of any kind.

The display base comes attached with the figure (removable), and in spite of the prototype pictures that Yamato released, the display stand that comes with the toy is your basic black plastic stand, and NOT the wood type.

The statue has some fine details on it. I particularly like the way the wavy hair sculpt flows down to her leg. Yamato also did a good job with the body sculpt. Well toned without having any real definitions, unlike some manufacturers who put muscle definitions on their female figures, making them ridiculously masculine. I love the face sculpt as well. At least it followed the anime where Kanu Uncho looks a little more mature, as compared to another version that followed the Manga, making her look young. 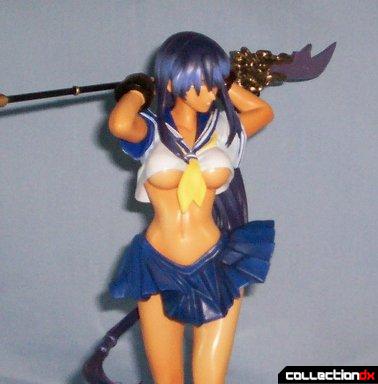 Kanu's school uniform was nicely done. A fairly simply top, which looks like it's just enough to 'hide' her top assets. The skirt is also nice, and it comes with a little feature that will let some of you have you anime fantasies come true... the skirt can be HIKED UP to reveal her white knickers and her firm rear! 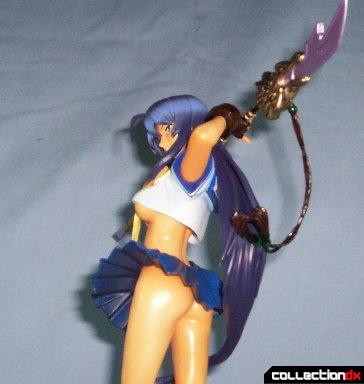 This figure comes with the standard display base, and one weapon- a Naginata. The Naginata is made from PVC as well, and is 11.25 inches long. It's intricately detailed with a dragonhead emblem at the base of the blade. It also has a sort of ribbon along the blade base that's made of very soft and pliable plastic. 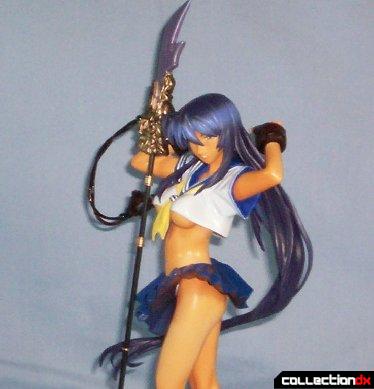 The Naginata fits nicely on Kanwuu's hands, but there's a little balancing act required as the blade end of the weapon is a tad heavy.

This figure is almost perfect in my book. The only issues I have with it are:

This figure is definitely a must have for any sexy female figure collector. I have 3 of this myself. 2 Originals (blue skirt, yellow scarf), and 1 Variant (black skirt, pink scarf). It has a couple of very minor issues, but with the amount of detail and beautiful sculpt on this thing, it's easy to ignore them. 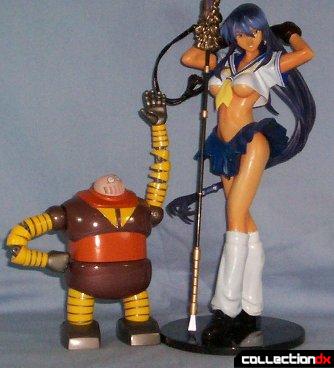