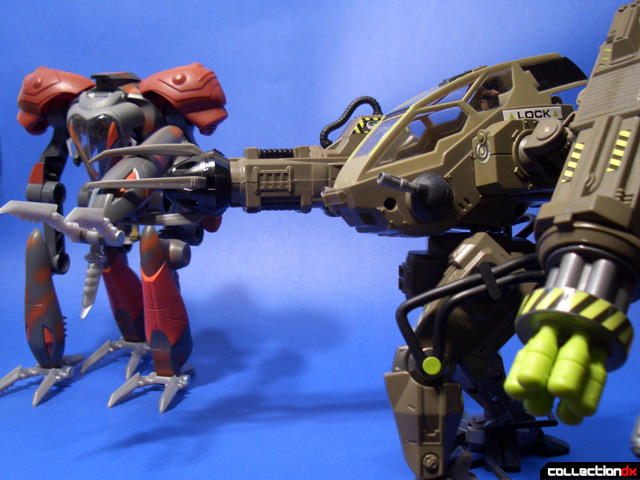 Sigma 6 is a fresh, younger, anime inspired look at the classic G.I Joe line. The series is animated by the exceptional animation house Gonzo; the studio responsible for the fantastic series Hellsing. 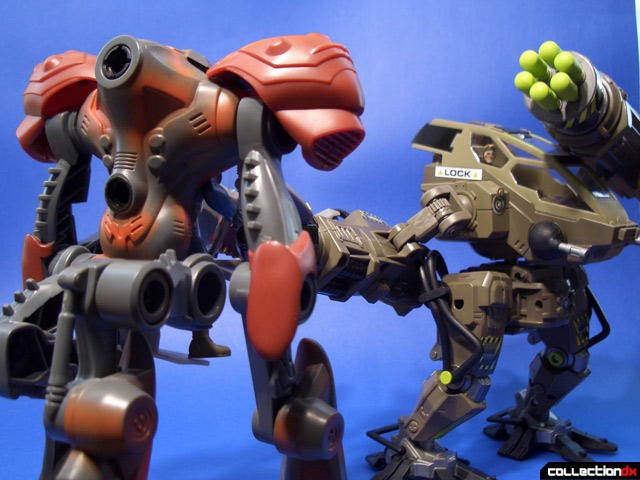 Using a robot army like the Trade Federation in the Star Wars films and Mecha, week after week Cobra tries to take over the world and is stopped at every turn by Sigma 6. 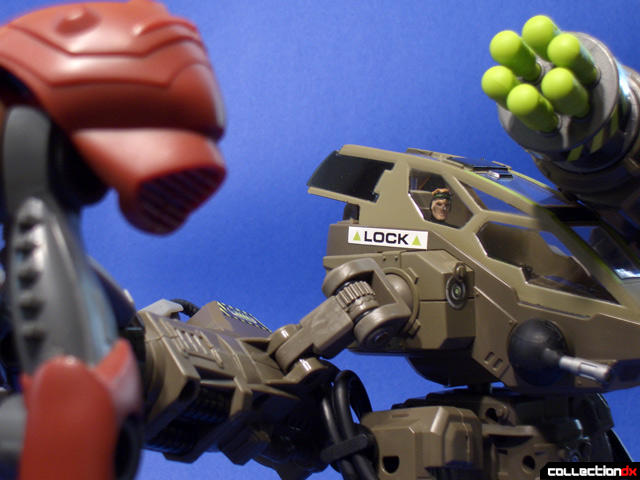 For this review I look at the Joe’s variation of mecha, the Iron Hammer. 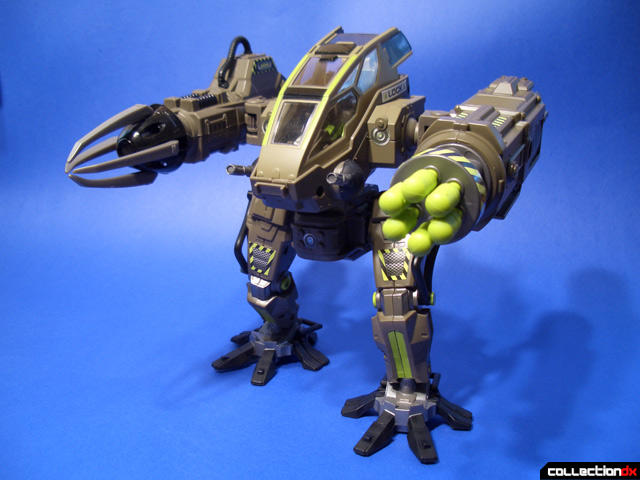 It looks like a cross between a classic G.I. Joe vehicle and a Destroid from Macross; and I do think it makes for a rather sharp looking vehicle. The fit and finish are fantastic with most details coming from adding the stickers to the toy. 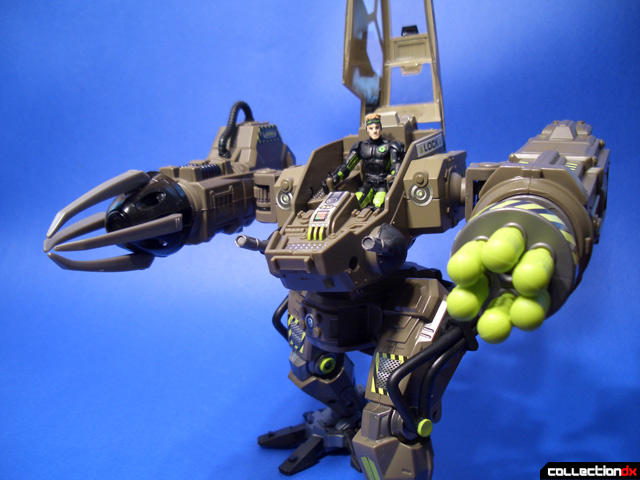 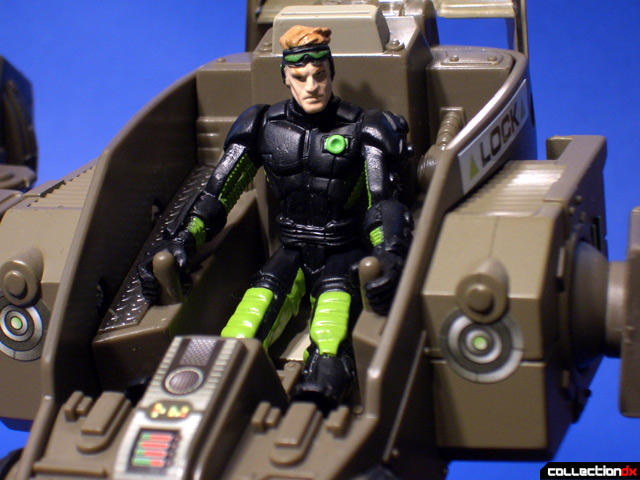 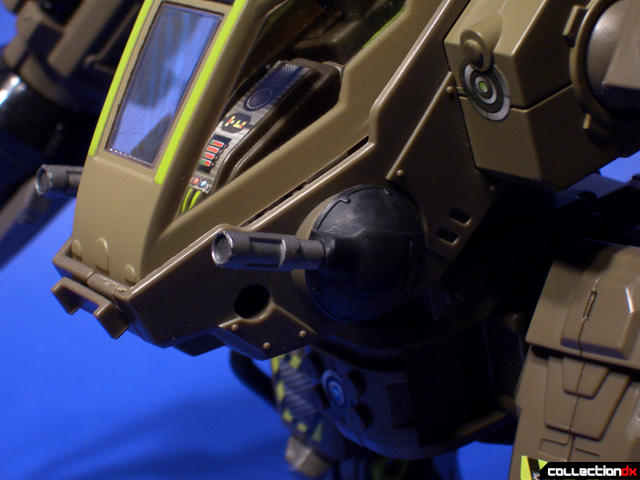 The cockpit opens to accommodate a 2.5 scale Sigma 6 figure and also features swiveling guns on the nose of the cockpit. 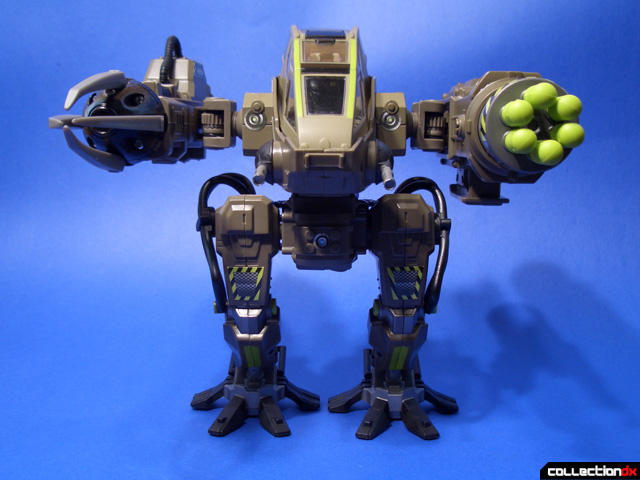 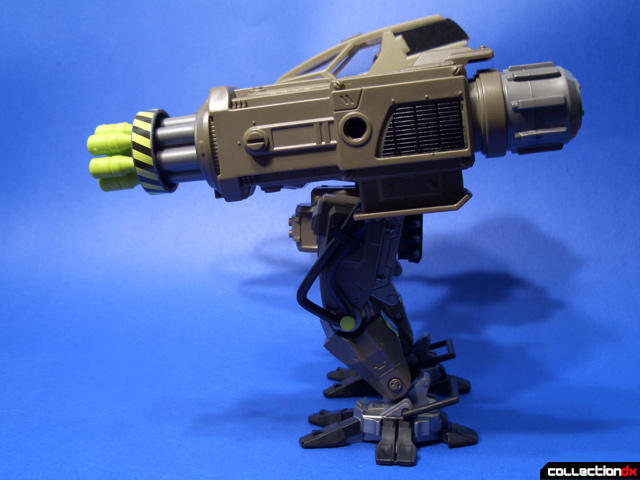 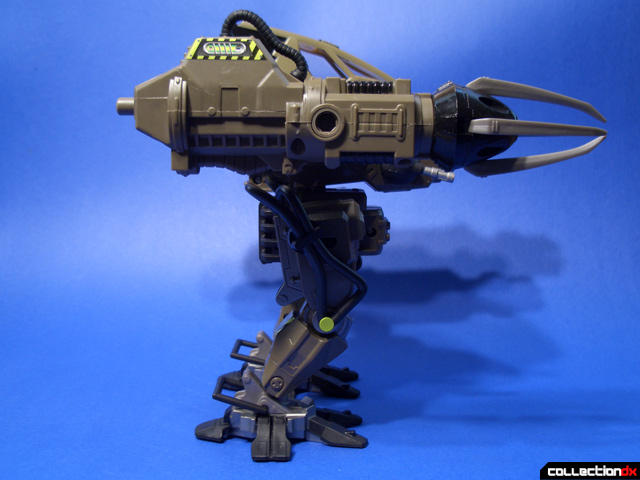 The toy stands about six inches tall with nine points of articulation and comes with four different arms to attach to the body of the mech; a machine gun, a working missile launcher, a working battering ram, and a working claw. 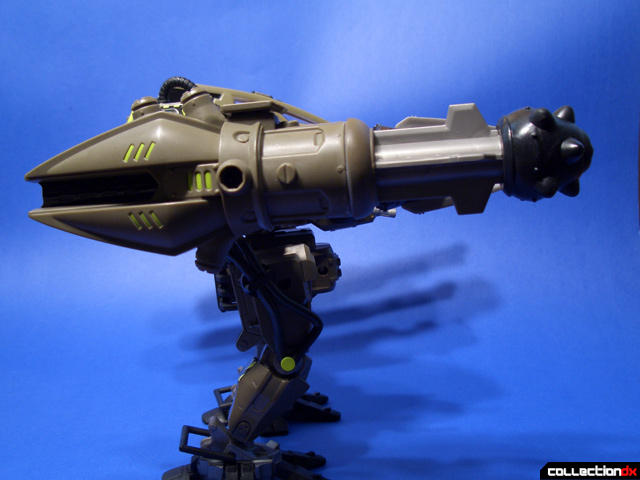 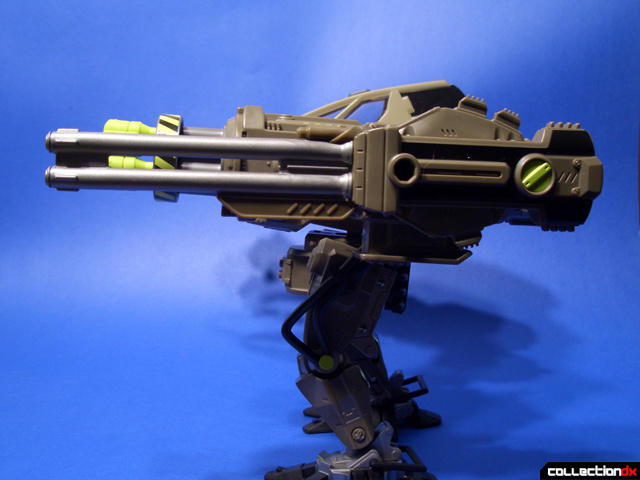 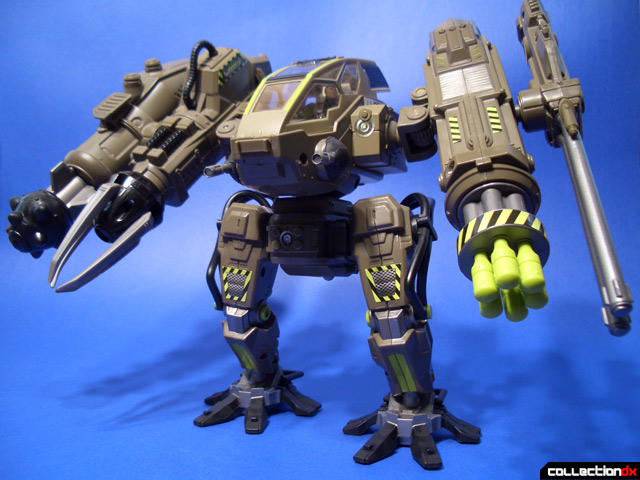 You can swap the arms out for different configurations or attach them all at the same time for maximum firepower. 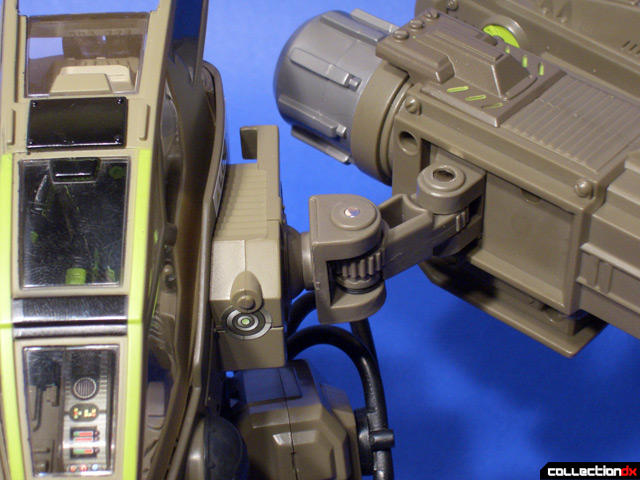 The arms are on joints that swivel out, allowing for some extreme poses. 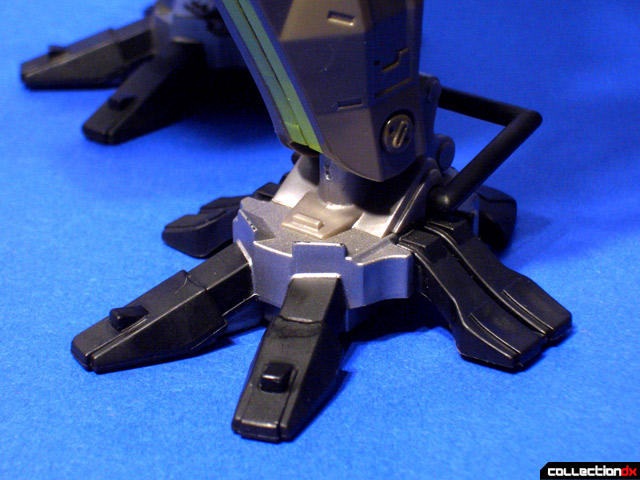 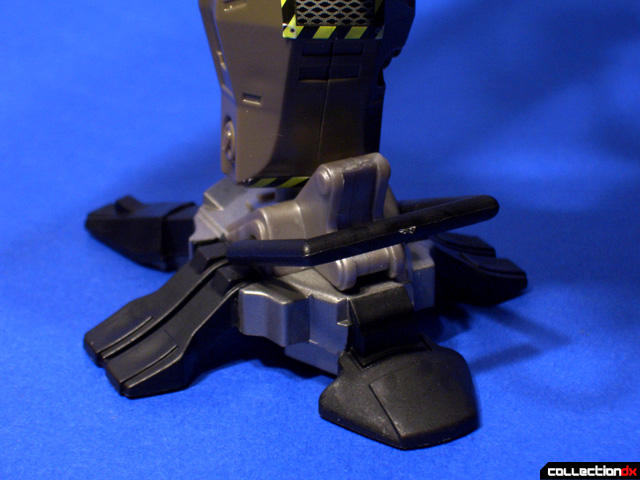 The legs do not bend at the knees, but do swivel in and out and back and forth at the hips and ankles of the vehicle. Normally I would be disappointed by this but it does seem to make it a much sturdier toy. 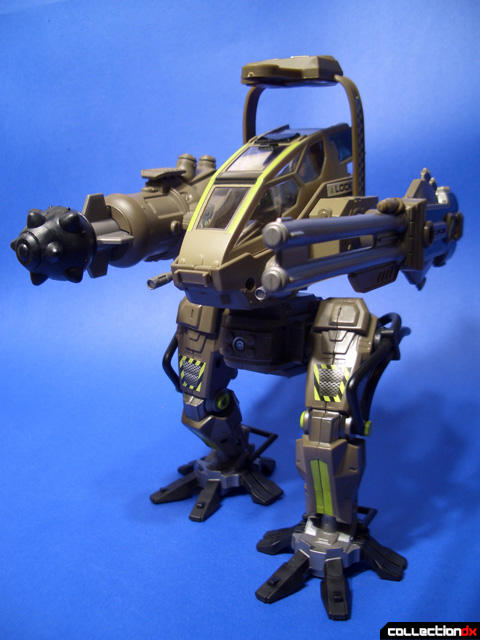 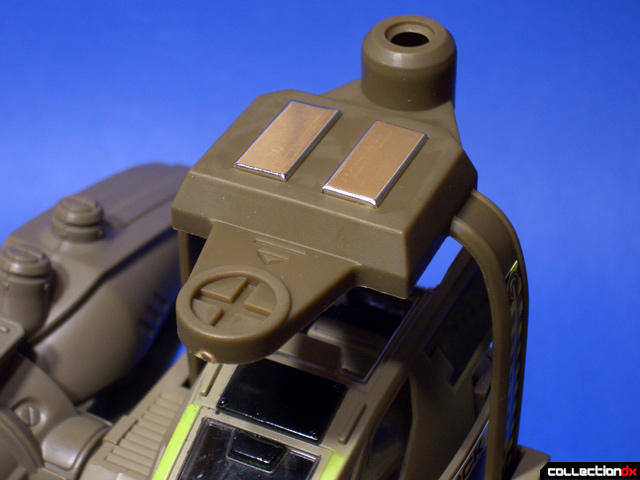 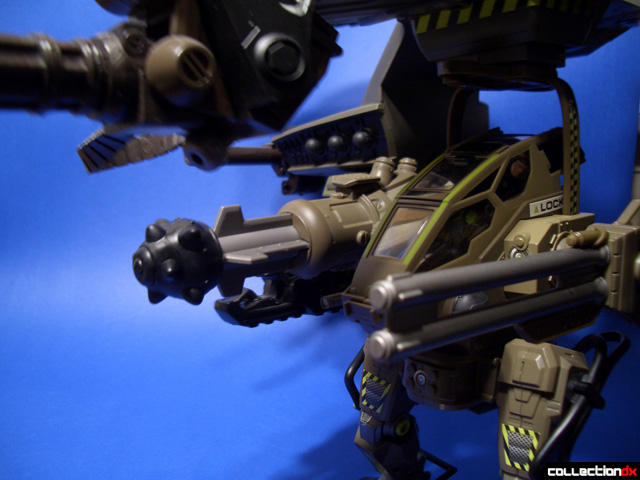 As with all of the 2.5 scale vehicles, this comes with a docking harness allowing the Dragon Hawk to pickup and drop it into action. However you have to use the slimmer arm attachments to fit it under the Dragon Hawks landing skids. 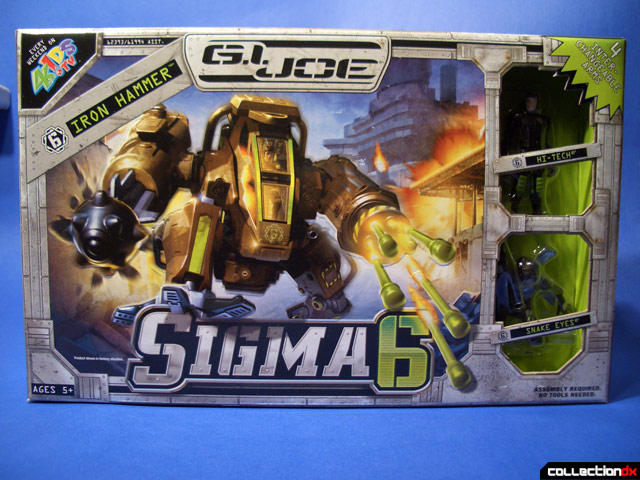 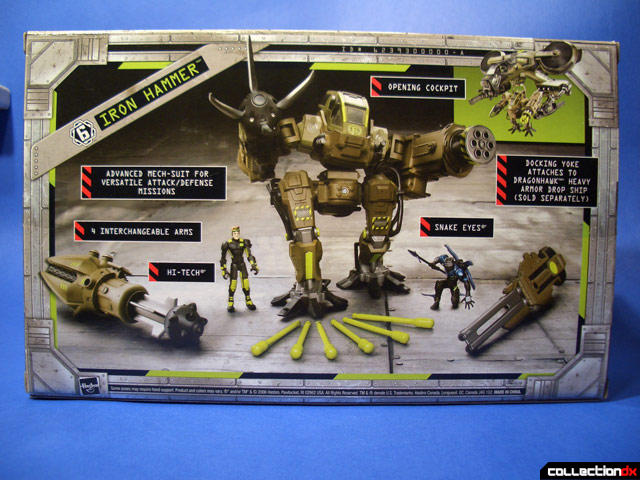 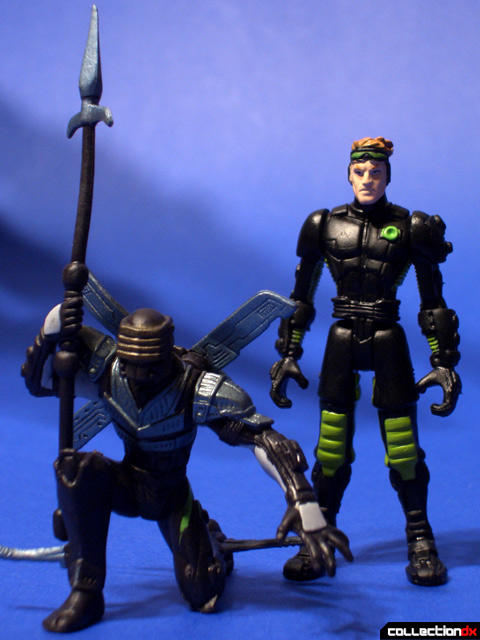 Included in the package are two Sigma 6 figures, Hi-Tech and Snake Eyes 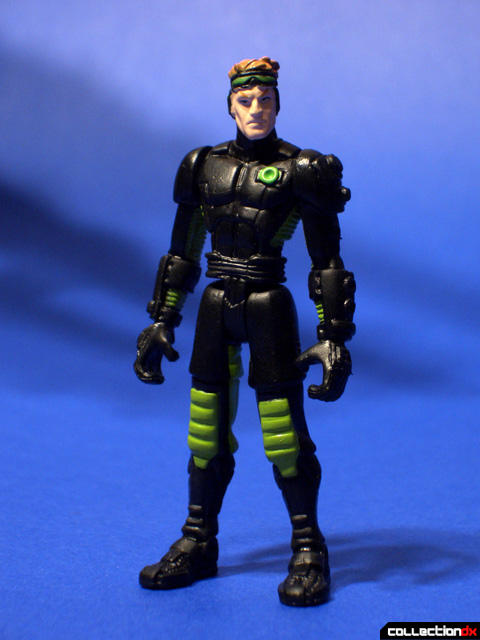 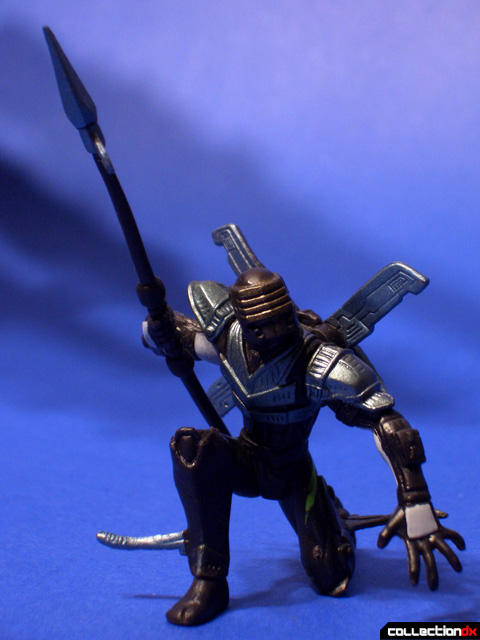 Snake Eyes is in a semi fixed crouching pose with movable head, arms, and waist. Hasbro knocks another one out of the park with this homerun. At 9.99 it is a no brainer, adult collectors will more than likely enjoy the mech look of the vehicle and kids will love the playability of the toy. Grab one today.

Nice-! You're right- it is like a scaled-down Destroid from "Macross", or a light-class [20-35 ton] BattleMech from the BattleTech RPG/video game saga.
.
I like the various spring-loaded features- in particular how different they are from each other. (I just love toy rapid-fire missile launchers!) I don't think it'll bother me too much if the knees don't pose, so long as the hips and ankles can sufficiently snap to different angles.
.
The "Sigma 6" Dragonhawk V-TOL aircraft reviewed earlier on CDX was jaw-dropping, but this is awesome too! And I like how the aircraft can carry and drop the Iron Hammer right into the battlefield, as opposed to just strapping a pair of "rocket" or turbofan engines to the back of it.
.
And all this for $9.99!? I am so gonna get one my next trip to a TRU, and it'll fit into the little spot left on my shelves too!
.
Didn't make 'em like this when I was a kid, either... (Am I old enough to start saying that now???)

True to my word, first chance I got, I got me an Iron Hammer. This thing is truely awesome for the price...! The limited ball-&-socket joints in the hips and ankles weren't as bad as I thought they were at first. They're limited swinging outwards, but work good enough forward-&-backwards.
.
In fact, my biggest complaints would be how tricky it was to put those vent decals on the 'calves' of the lower legs. The shoulder joints, especially on the grabing and missile-launcher arms, are really difficult to snap on and off! Sheesh!
.
(I also left Snake Eyes in the box. Hee hee hee...)
.
What surprised me most was how much smaller the "Sigma 6" figures are compared to the earlier American counterparts. That probably allowed for the more versatile sets. I recal how it was just blocky vehicles with pop-out weapons and simple single-round missile launchers originally, but now we have fully interactive vehicles like the Iron Hammer where you can swap the different weapons.
.
Next step: the Dragonhawk!