e-HOBBY is an online retailer based in Japan, but to me and most westerners, they're better known as an affiliate of Takara that releases exclusive repaints of Transformers. That might not sound too interesting, but every repaint is either homage to something out of Transformers past or a story element that hasn't been realized in toy form. In this case, it's a little of both. 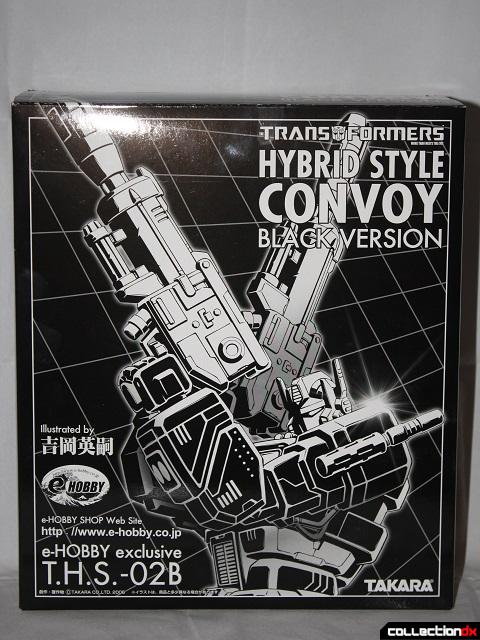 I've already covered Hybrid Style Optimus Prime, (AKA Convoy) in a previous review, so this is more about comparing the two, why this toy was made, and if it has any merit. But that's still plenty to cover. This is actually the last of the three toys produced under the Hybrid Style banner, so maybe e-HOBBY saw an opportunity to do something special.

Besides the clear designation of "BLACK VERSION", this box also stands out because it has artwork all over rather than product photos. These were drawn by Hidetsugu Yoshioka, a Japanese artist who's been doing work for Takara since the late 80's and Masterforce. For me at least, seeing Optimus Prime like this is as impressive as it is ominous when I look at the the stark contrast between black and white, light and dark, even as close as his gleaming armor next to his half-hidden face. Note too that there's no box flap this time, so you literally can't see this toy till he's out of the box. 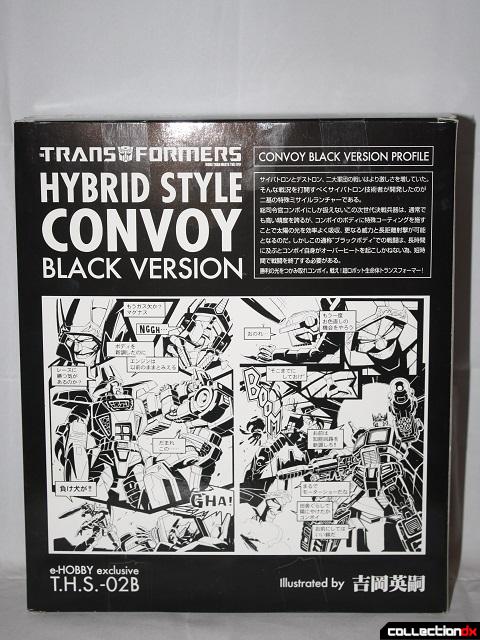 It might be hard to make out at this size, but basically a Galvatron from an alternate reality is beating the crap out of G2 Laser Rod Ultra Magnus. Right before the killing blow, Optimus shows up in his new body and new black paint job to save the day. Galvatron makes a comment that indicates he knows how Prime got upgraded, and the battle is on. This takes place near the end of Japan's take on Generation 2. Supposedly a comic with a more complete story is included, but I didn't get it. 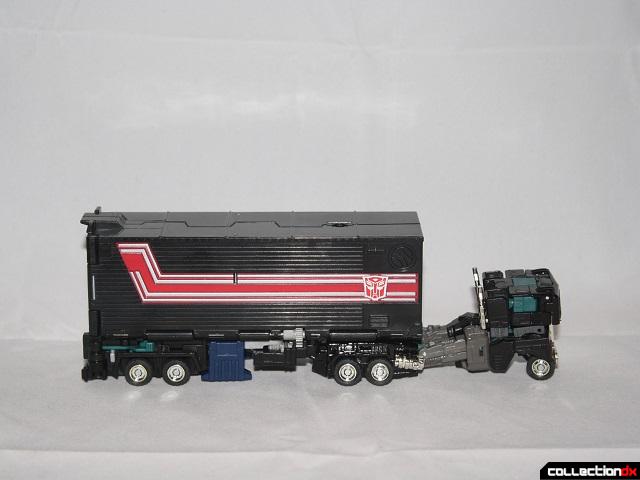 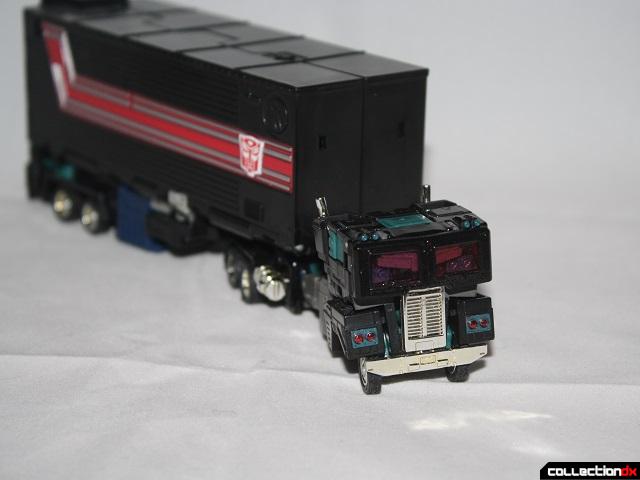 Cool explanation and color scheme or not, his alt mode still looks bad. The only improvement here is that all the black helps take away from the gaps in his front end. Note the pink/red windows, a nod to Nucleon Quest Super Convoy and part of the inspiration for this toy. 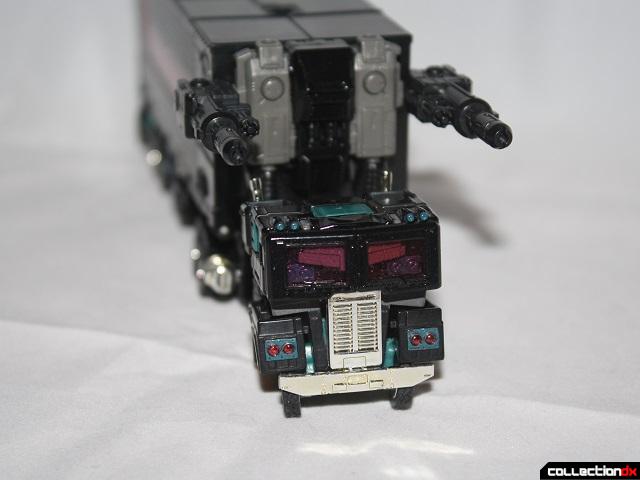 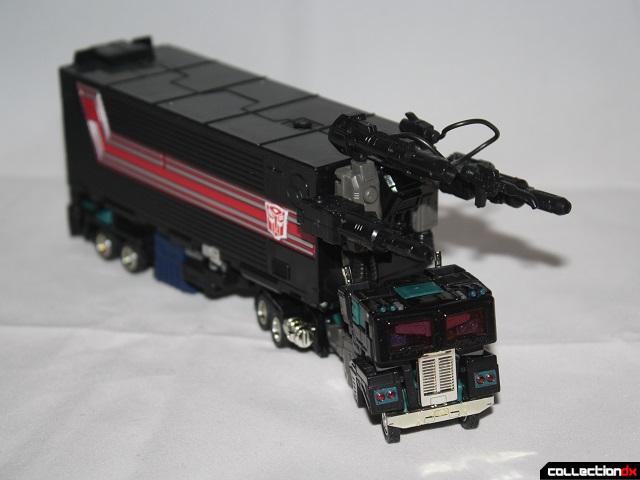 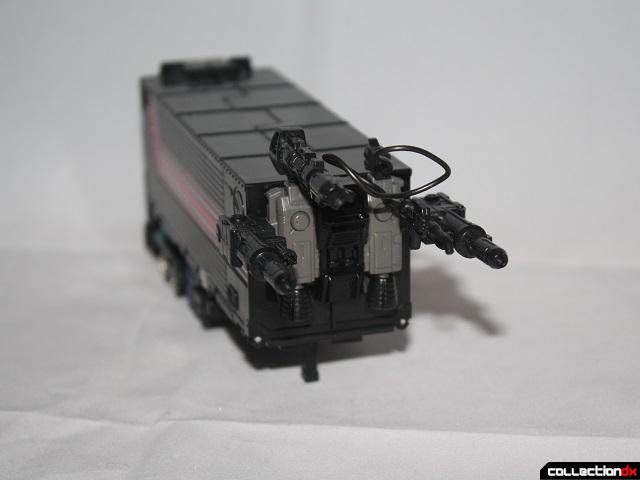 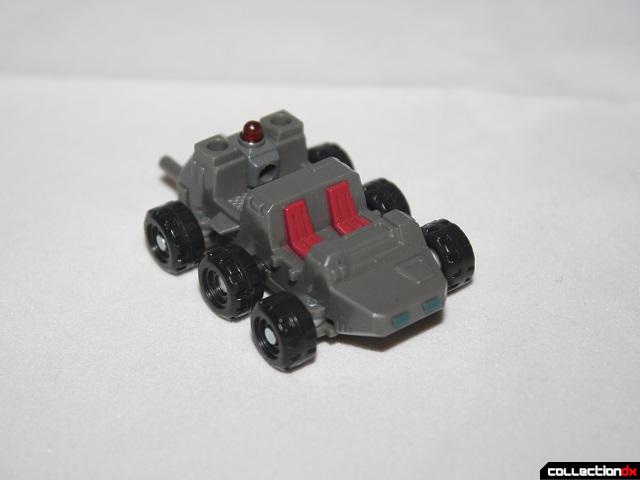 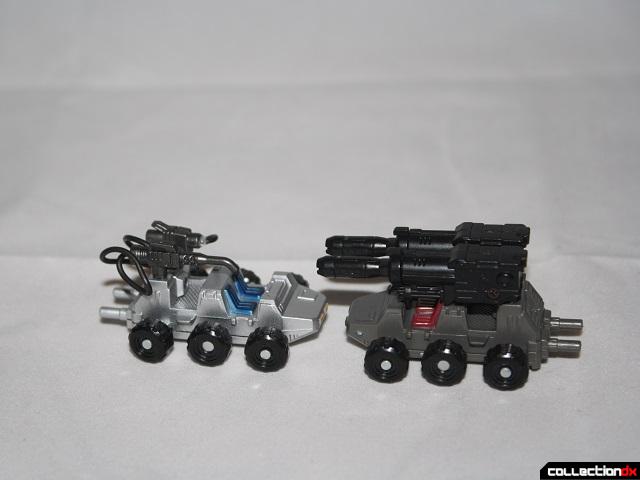 Roller also gets the dark treatment. Not sure if I've ever seen a car with dark green headlights. 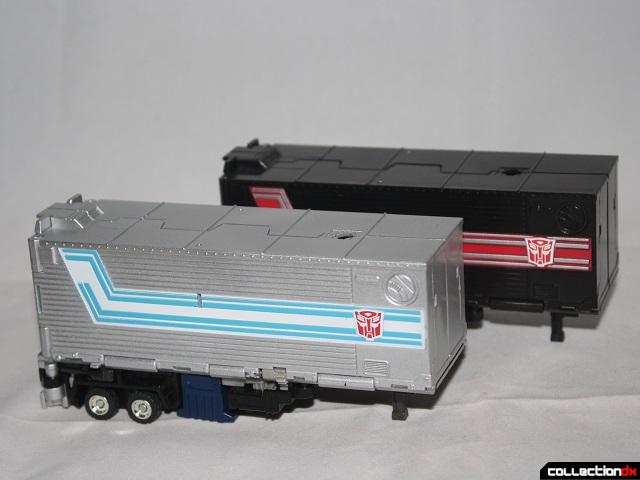 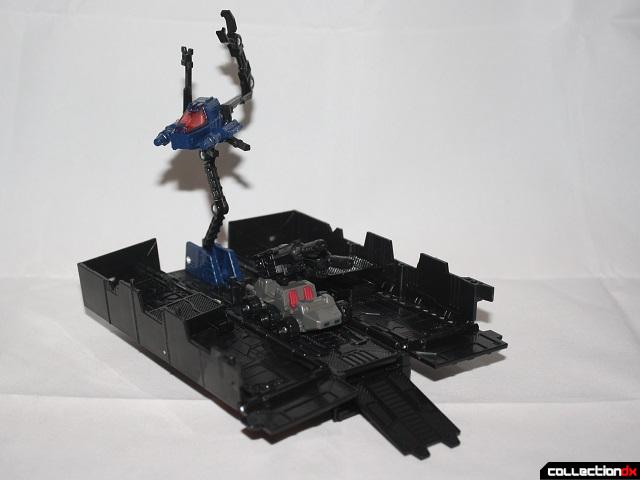 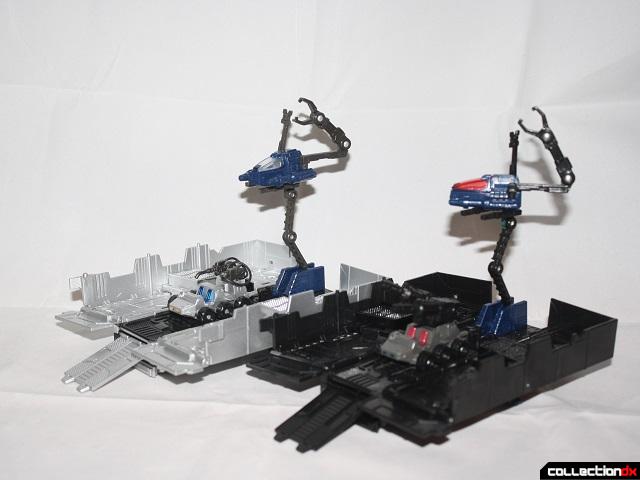 The Combat Deck received a similar treatment. I find the most interesting change is the command module's canopy going from clear to red, which is a nod to G2 Optimus Prime.. 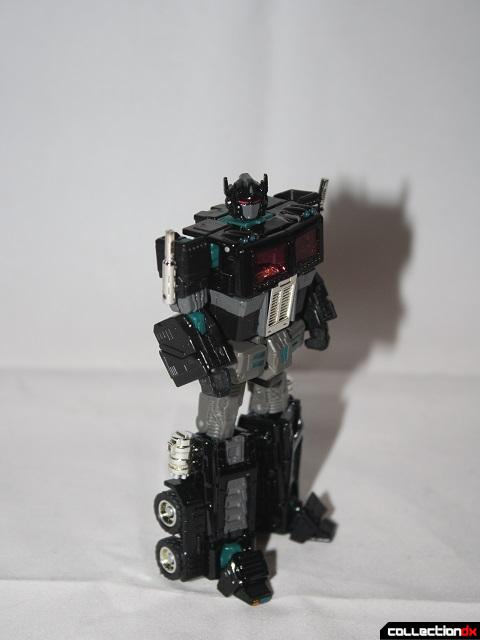 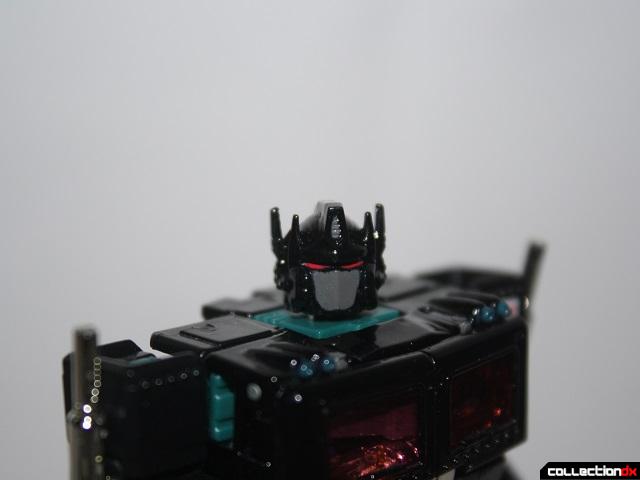 All the ladies think he's so dashing. 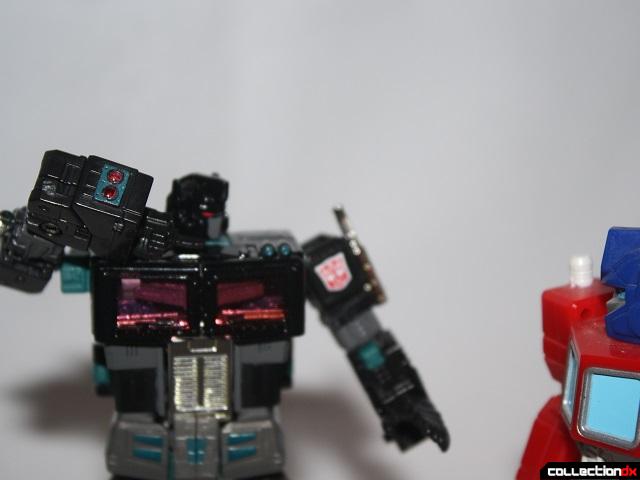 But he can still go. He's giving the sign. 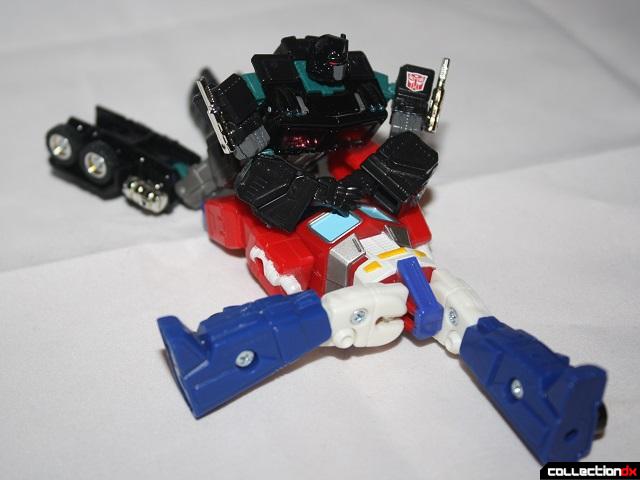 Yup, AM Optimus just got tombstoned and is down for the count. 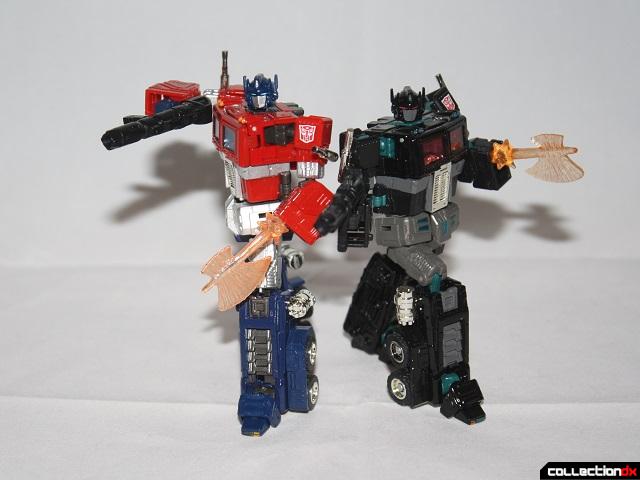 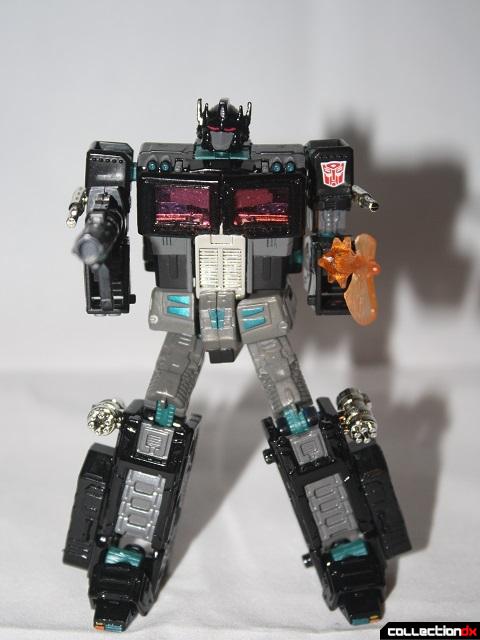 Besides making for an awesome team-up pic, the special black body coating allows Optimus to absorb solar energy. This greatly increases his strength but also makes him prone to overheating, so any battle he's in needs to end fast. This also evokes Nucleon Quest Super Convoy (TRU Japan exclusive repaint of Powermaster Optimus Prime). That toy represented the modified form Prime took on when he traveled into a black hole and discovered Nucleon, which lead to the creation of the Action Masters. 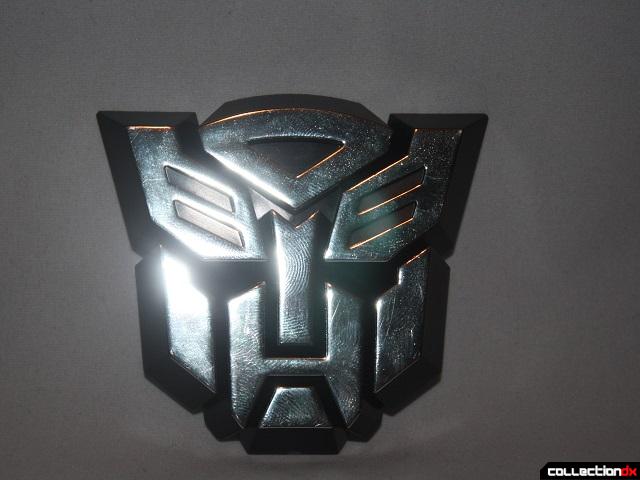 The stand has been changed from metallic red to silver, so that's another reason for a team-up shot. 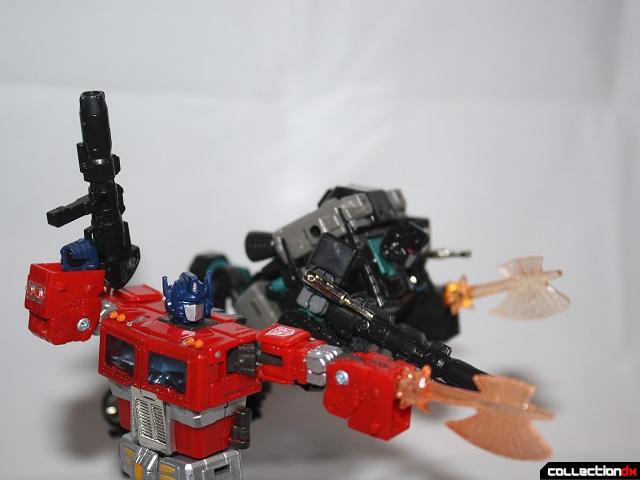 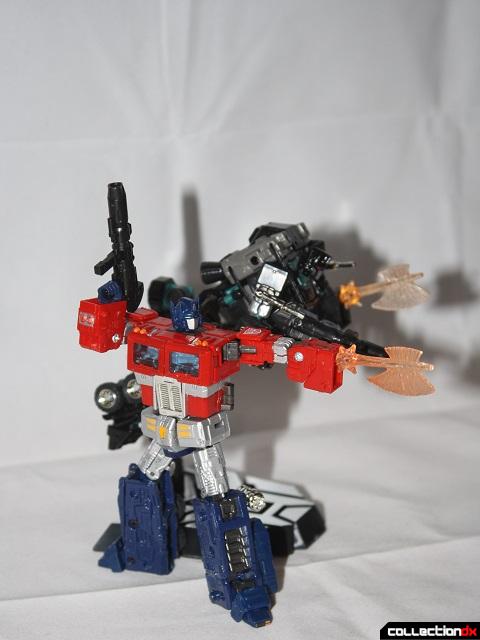 Someone's about to get got. 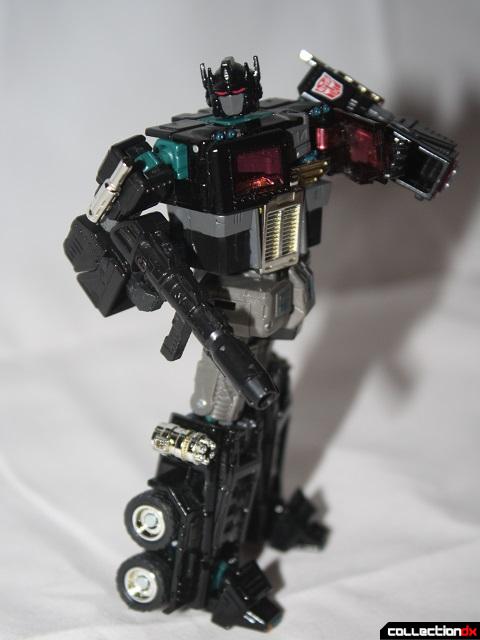 Black Convoy (Car Robots) wasn't the first evil Prime, but he made the concept cool. To this day, most evil or primarily black Prime figures have green/teal and pink accents. But switch all that for red here and we've got some Guyver III action going on. Although the interior of his chest has been recolored, the Matrix is unchanged. 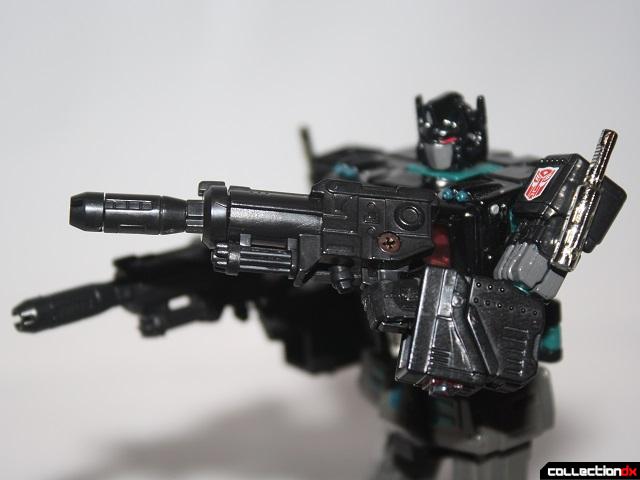 These missile launchers are so powerful that only Prime can use them. They are another callback to the G2 Optimus, who had two spring-loaded missile launchers with underslung gatling guns. The homages to Generation 2 are why, despite the weak truck form, I think it pays off to have both versions of this toy. Another reason is that it also comes with two alternate heads for the original. 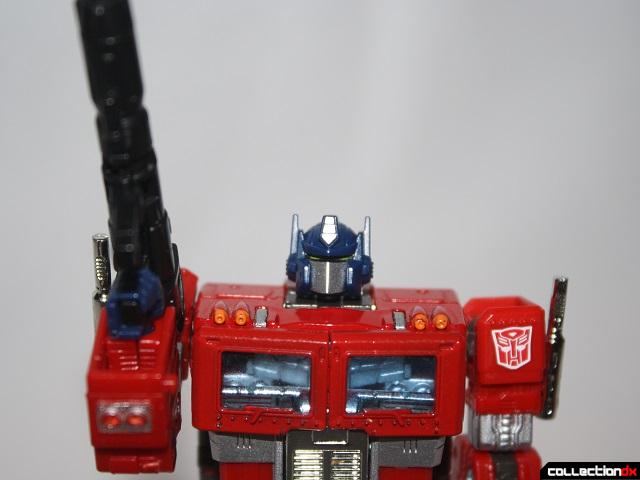 Both heads are based on the artwork of Derek Yaniger, who did pencils for Marvel's Generation 2 comic. The first is clean, which makes it easy to notice the yellow eyes, shorter/thicker head crest, and broader/single fins on the side. All of those features are things that changed going from toy to animation. 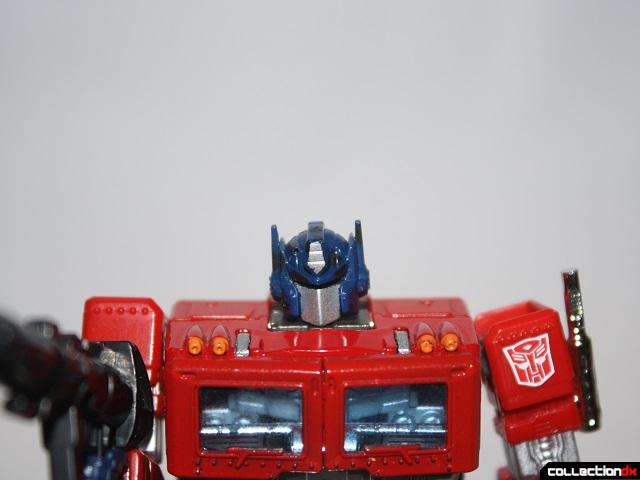 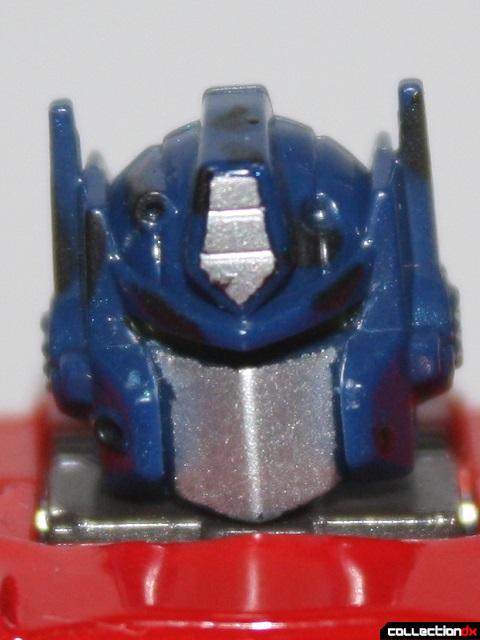 The second head is damaged, modeled after the cover of Generation 2 #1. I think it's a pretty good approximation of Yaniger's art. 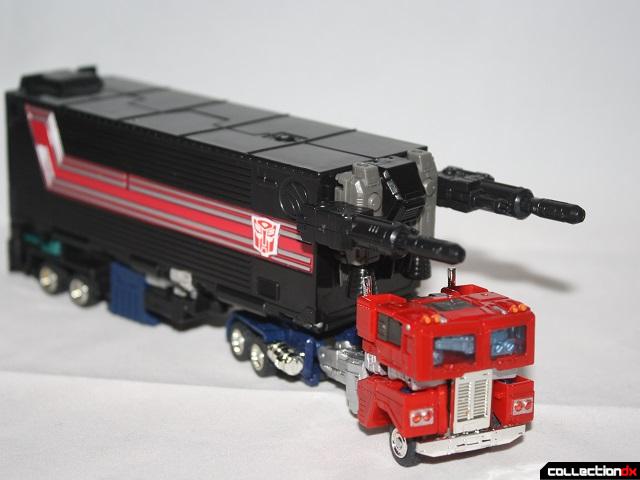 And finally, when you put it all together... BAM! You've got a complete G2 Prime. G2 Prime has a black trailer with silver/red on the sides and a big voice box that attaches up front. The voice box can in turn mount one missile launcher on each side. I don't enjoy the truck mode, so the value is slightly lost one me. But huge points for pulling it off. 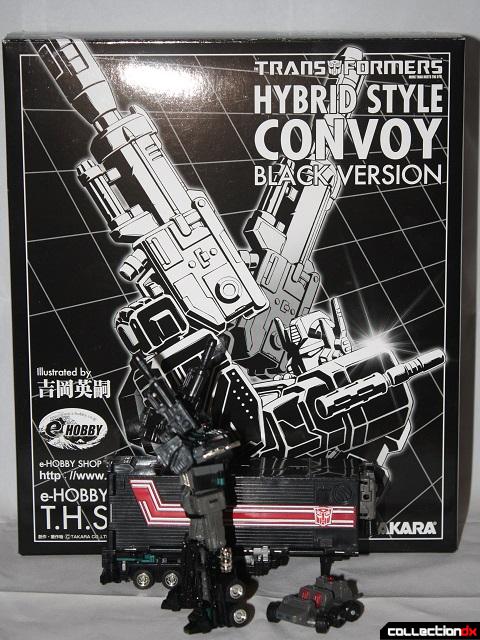 Prime's truck mode disappoints me as much as it does because I love the character and hate to see him come up short. But the black motif helps diminish that sentiment and just looks really cool. Also, yay for extra weapons! Only other black Primes that really stand out to me are Nemesis Prime (Armada) and Black Lio Convoy (Beast Wars II), so he's in rare company. It's sweet to have both versions because of the G2 element, but if you're going to buy only one, e-HOBBY gets the nod from me. I scored him for $50 back when, and he seems to go for at least double now, but if you're thinking about it, he'll be worth it.