The Divine Crusaders are among the most recognizable of the SRW antagonists. One of the series' earliest villains, the DC army instigated a rebellion to fight against the corruption of the Earth Federation, although the true purpose of the uprising was known only by the topmost DC leadership . Since I try to include only the bare minimum of backstory in these reviews, just think of the Divine Crusaders as the Principality of Zeon. The Guarlion is essentially the Zaku II of the DC, a ubiquitous unit far more advanced than anything fielded by the Federation, but eventually completely outclassed. Here's the usual footage found from youtube.

Ace pilots often decorated the units in their own livery, and in addition separate paint schemes were used by groups who had aligned themselves with the DC’s goals. As such, there are a lot of Guarlion variants. Looking at the Japanese Wikipedia entry, I counted 22 different types across SRW media, and that’s not including any of the DC’s other ‘-lion’ series of mecha. Thankfully, there are only two Guarlion variants in FAF line, released as Volks’ event exclusives after the mass production version of the figure was sold through Dengeki Hobby magazine. The Guarlion Custom and the Guarlion Custom “Trombe” are more or less the same figure, so I figured I’d do a twofor. 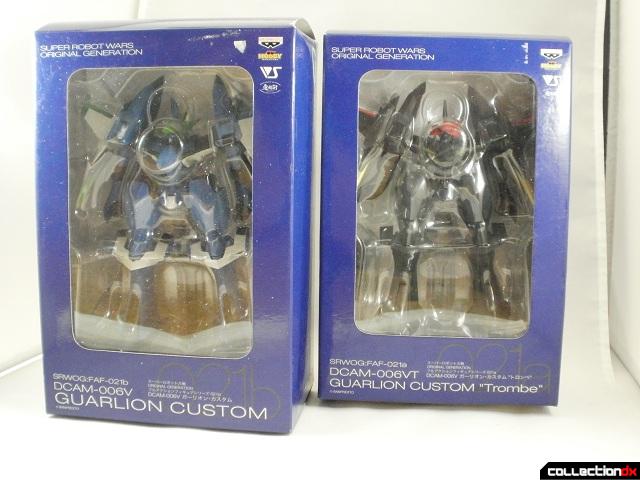 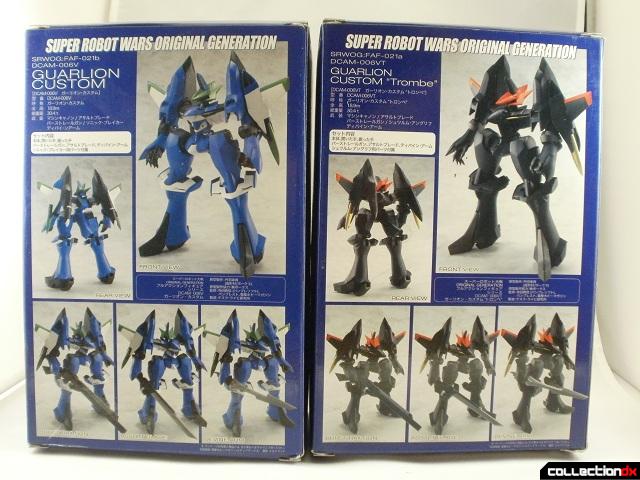 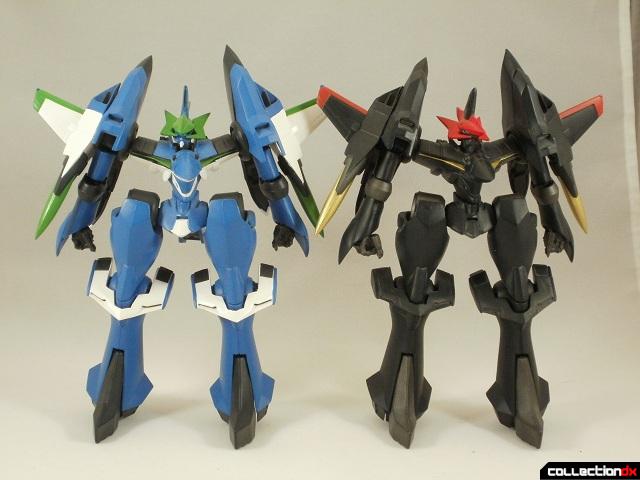 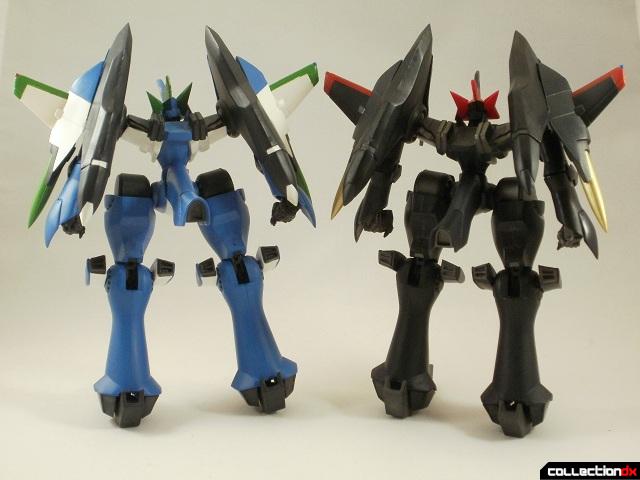 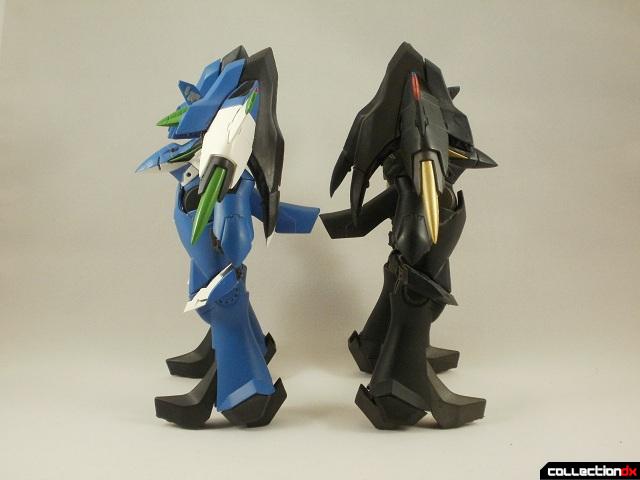 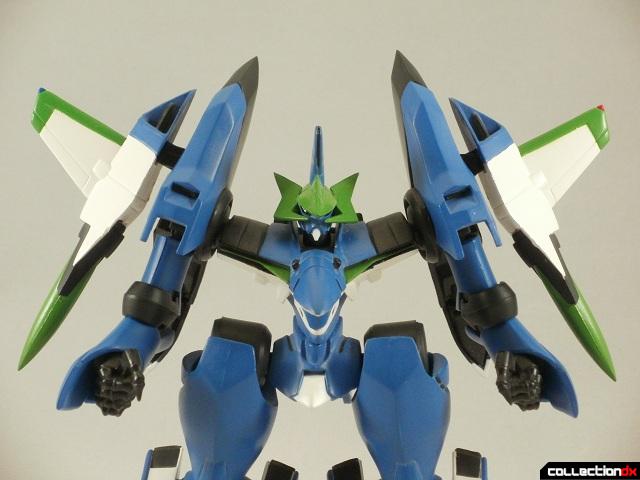 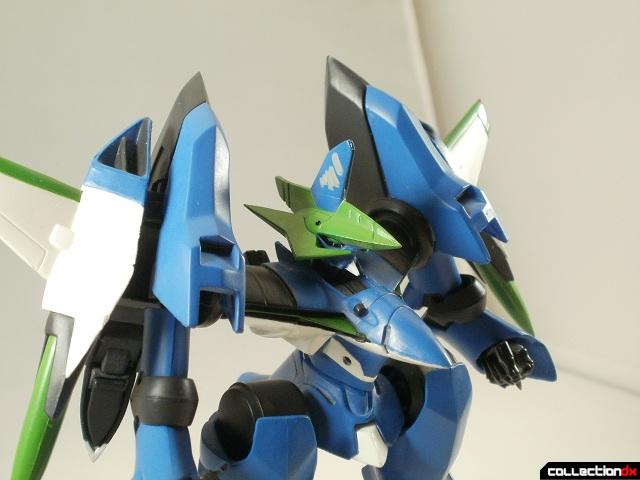 The Guarlion Custom comes in the blue and green colors of the all female Troye unit, an elite squadron from the space colonies. This color scheme is usually associated with former member Leona Garstein. 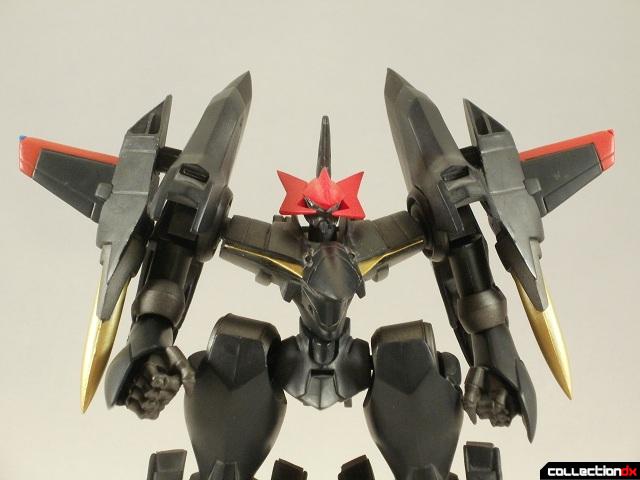 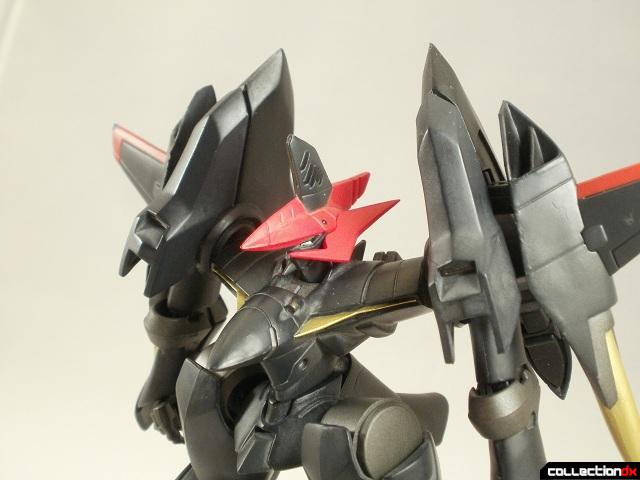 The Trombe is all black saved for some red and gold trim, and like all the machines bearing that name, it belongs to the mysterious Ratsel Feinschmecker, a well-disguised man who is very enthusiastic about horses and gourmet cooking. Also, um…horse roleplaying. It's worth noting that both of the Guarlions have eyes, though they can be a little harder to see on the Trombe.

The Guarlion is primarily a flying unit, and it shows in the large shoulder engines and vaguely wing-like surfaces across its body. It’s also very pointy. Basically everything on the figure that looks like it might be sharp, is. I’ll freely admit that I wasn’t having a lot of fun fiddling around with them, because I kept poking myself.

Articulation is kind of par for the course for a FAF, which means that it's pretty awful. The arms can’t bend very far, but in this case it’s because of a sleeve that clips over the inside of the elbow joint. 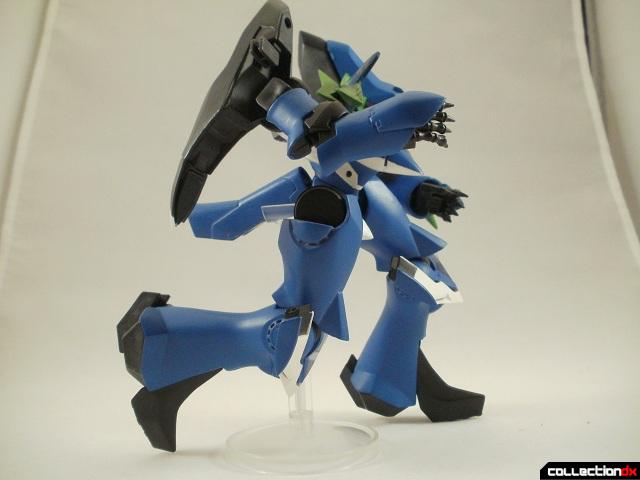 Shown with the shoulder boosters removed.

Because the leg pieces are molded over the knee joint, you get the usual two clicks worth of articulation, although if you do it right you can actually get two and a half clicks. The heel and toe are on separate ball joints. Note that the figure can't actually stand if you bend the knees though. Even if one knee is bent and the other is straight, the figure becomes too unbalanced and falls over.

The shoulder engines are on a joint allowing them to swing out for tight maneuvers. Unfortunately, due to what looks like a problem with the mold itself, they don’t sit flush when folded down. There’s an outline where the piece should fit, but it doesn’t. It’s like two different people made each half of the assembly without ever checking on the other. 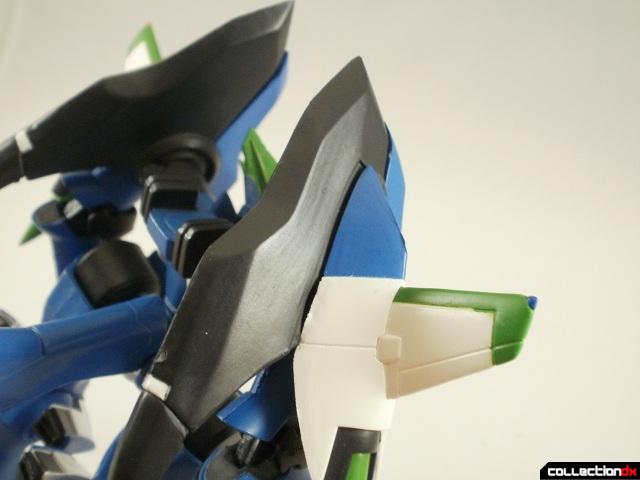 In a crazy turn of events the paint job is simple, but surprisingly really well done. There's really no overspray anywhere. To make up for this oversight both of my Guarlions look like they were dunked in mold release after the fact, which left the figures with a hazy mottled texture, like they had been soaked in milk and then left in the sun. I tried to remove some of it, but at some point I just need to have a cleaning day for all of my FAFs. 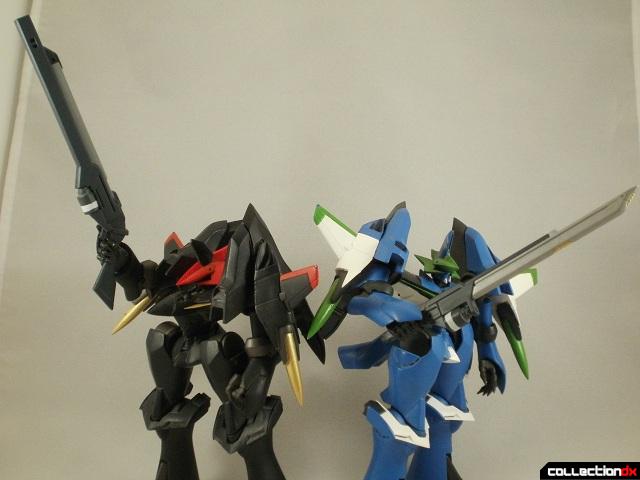 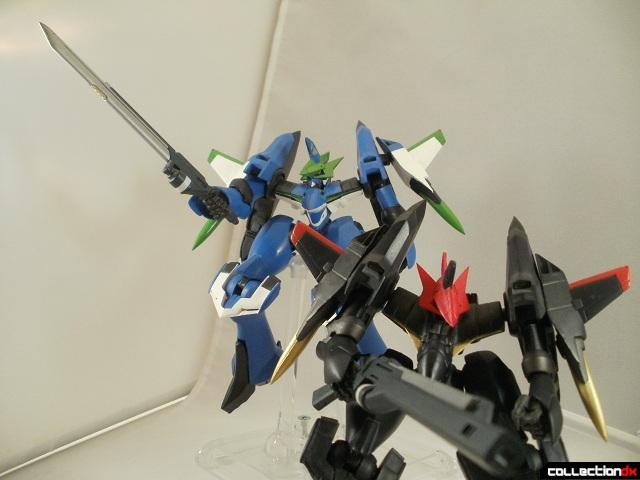 Weapons include the Burst Railgun and the Assault Blade, which are fairly long weapons with lots of presence, so it shouldn’t be a surprise that there’s some sort of design flaw. The hands for the Guarlion are straight pegs, and the pegs are quite short. The hole they fit into is deeply recessed, and also cut at a diagonal angle. This means that there’s only about a millimeter of plastic keeping everything together, and whether or not the weapons stay on or fall off is mostly dependent on a figure by figure basis. In this case, the Trombe really couldn’t hold its weapons at all, so I had to [insert your preferred method for fixing friction issues on toys here].

First is the Divine Blade, a stronger melee weapon that replaces the Assault Blade on the custom units. 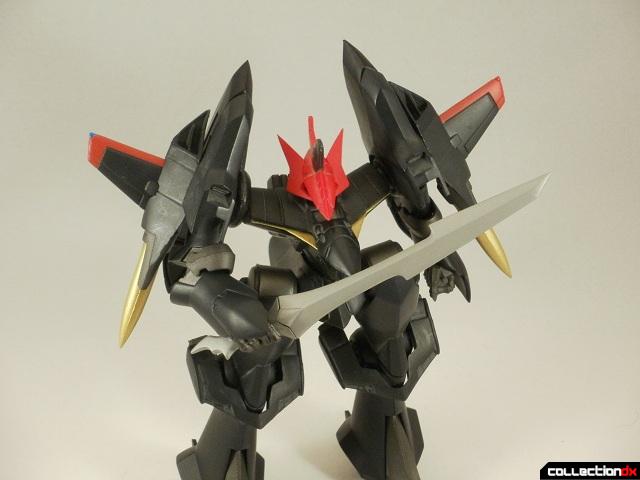 Second are a pair of slightly different front shoulder guards, which allow the shoulder assemblies to be angled forward over the arms. This reenacts the Guarlion’s “Sonic Breaker”, a special attack using a defensive field as a ramming weapon, similar to the creative uses of the Pinpoint Barrier in Macross. It’s especially with the Sonic Breaker parts where you really feel the loss of the stand. These are supposed to be flying units, after all. 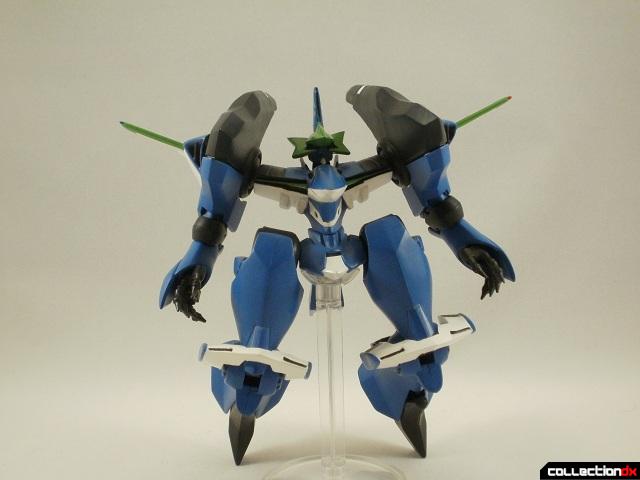 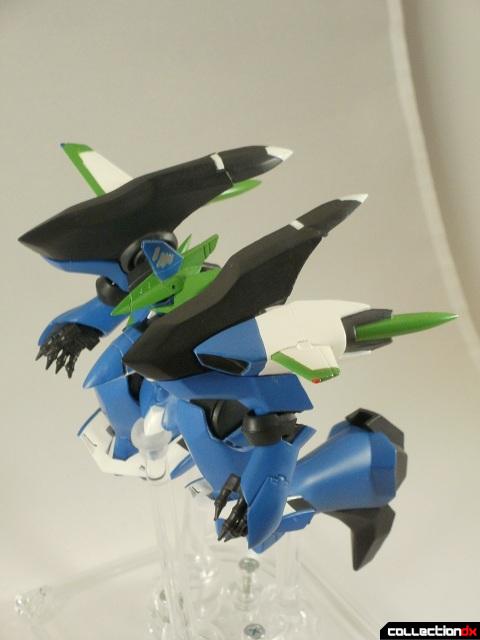 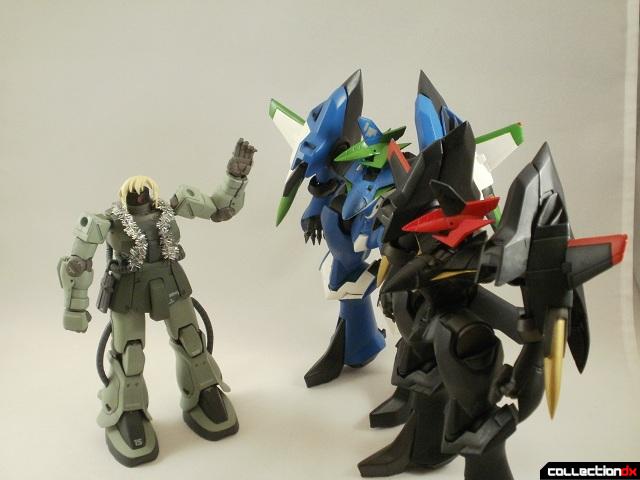 Oh hello, who are you? Someone not related to Zeonography Zaku you say? How very mysterious.

At the end of the day, the Guarlion isn’t stellar, but it isn’t entirely offensive either. The most notable thing to me about it is probably how crazy the pricing on these got. Not including aftermarket prices, the retail pricing on the FAF line started at somewhere between “not expensive” and “that’s beginning to push it” and kept steadily climbing towards crazy town with each subsequent release. This is one of the regular sized FAFs, but these two cost 7,000 yen each when new. Now though, it’s a good piece if you wanted to see what this line is about; with even the rereleases regularly going under 2000 yen it’s one of the most cheaply available FAFs, I got mine for 1000 each. I’m pretty sure I’ve recommended against any involvement with these toys at all though, why would you even be thinking that?

Next time: I dunno. Werkbau?

I goofed on the review a bit, because the Trombe would have still been piloted by Elzam during the DC War before he found a pair of sunglasses.

I'm not changing the review though.

Because look at this fool. I believe "Troye" should be spelled: "treue"

Like probably 50% of foreign words in SRW, it's a misspelling. It should be Treue, but it's Troye.