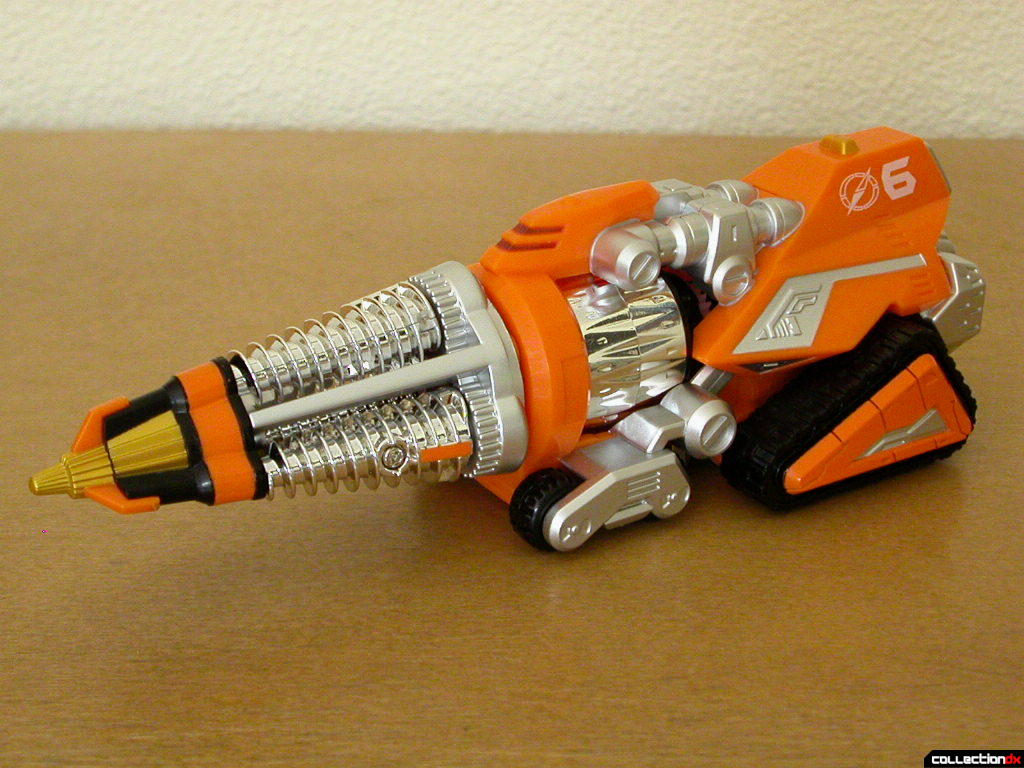 In Task 04- “Lost Vehicles”, Bouken Red was the only one of the five Boukenger to make it out of a large avalanche created by an uncontrollable Jaryuu Clan weather Precious which had buried them in their Gougou Vehicles alive. Only Gougou Vehicles #6 could penetrate through the ice and maneuver through the uneven terrain beneath to successfully rescue the cold and stranded Boukenger. Bouken Red’s fear and determination not to lose more teammates drove him to overcome and eventually tame the orange overload-prone Gougou Vehicle, though it was still a draining experience for him. Even after its first use in combat, Gougou Drill would prove to be difficult for the other Boukenger to control. When launched from the Sargess mecha bay, Gougou Drill appears through a subway tunnel beneath Tokyo’s city streets.

Gougou Drill (back) is an articulate looking vehicle which is much more appropriately sized in comparison to most of the other Gougou Vehicles seen in the DX Gougou Gattai DaiBouken. As the first of the Gougou Gattai Vehicles released, it is similar in many ways to previous auxiliary mecha from “Hyakujuu Sentai GaoRanger” (aka “Power Rangers Wild Force”, 2002), and “Bakuryuu Sentai AbaRanger” (aka “Power Rangers Dino Thunder”, 2004). As opposed to a battery-driven movement like in “AbaRanger”, the first Gougou Gattai Vehicle is hand activated: when rolled along a smooth, flat surface, the large drill bit slowly rotates clockwise. But, instead of just a simpler, single-piece drill bit, PLEX added a very clever twist- three smaller drill bits within the larger drill, which rotate counter to the larger drill! As the combined bits turn, there is an internal part which also spins, along with the cone-shaped nozzle on the back. I can’t get a good picture of it, but the golden tip of the large rotating head is molded in a drill-like pattern as well. The two large fixed tractor treads towards the rear both can rotate in 90° increments backwards, which angles Gougou Drill’s body downwards so that it can begin burrowing.

For those of you wondering what the differences are between the Gougou Gattai Vehicle #1- Gougou Drill from “Gougou Sentai Boukenger”, and it’s English-speaking counterpart - the —

For the first of the Gougou Gattai Vehicles to be released, Gougou Drill is fairly basic in operation. The spinning drill with the smaller bits inside, and the exposed rotating internal pieces are very cool and add much to what could have been a very boring piece of plastic otherwise. And how it can spin while moving is also really fun. I recommend it with high regards.

When the weather Precious changed itself in to a giant monster, DaiBouken engaged it, but the Gou Picker and Gou Scooper weapons prove ineffective against its hardened ice crystal-like body. Only Bouken Red, still inside Gougou Drill, was able to cause it any real damage. The five Boukenger decided to combine their two mecha to create DaiBouken Drill. Even though combined, Gougou Drill still proved to be a shocking experience for them. Its finishing attack, Maximum Penetration, shattered the weather Precious monster. 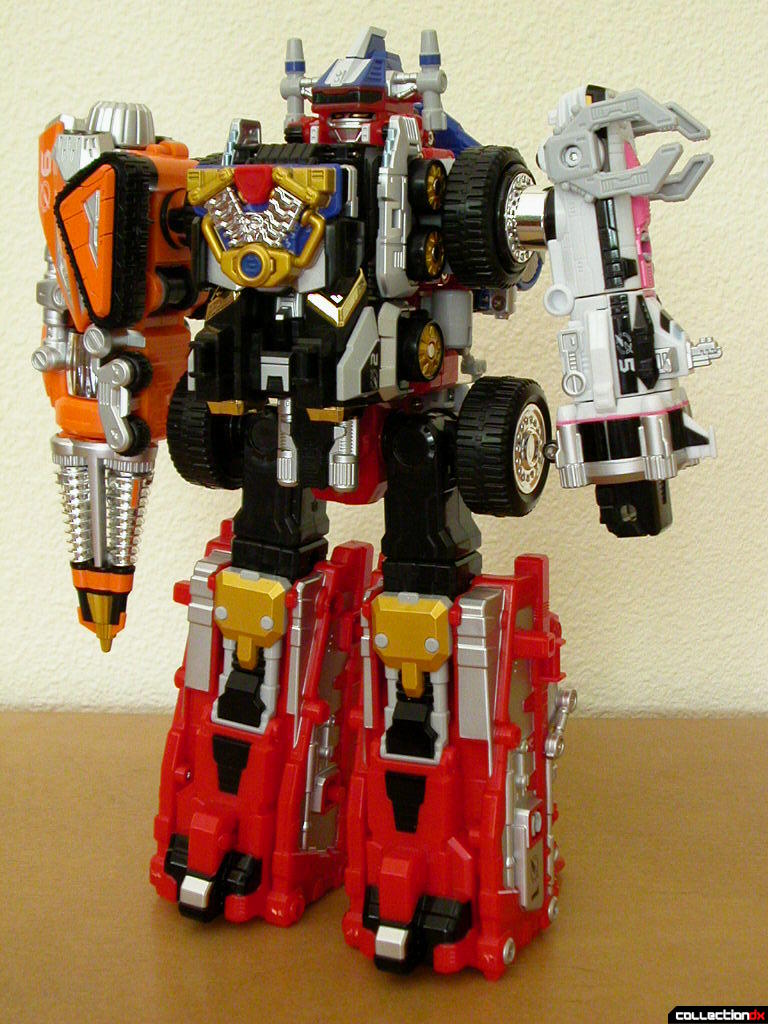 DaiBouken Drill (back) is the first arm-swapping upgrade seen in “Boukenger”, and the most resent since “AbaRanger”. In stark contrast to the smaller arms of DaiBouken created by Gougou Dozer & Gougou Marine Diver, Gougou Drill gives some much-needed bulk to the right side, and it can rotate in 45° increments, and the drill can be spun by hand via the silver-painted nozzle on the top. This, coupled with the DX DaiBouken’s unusual flexibility allows for some interesting poses. One thing about the combination, though, that isn’t explained very well is what happens to Bouken Yellow’s Gougou Dozer. The instructions say it’s supposed to attach inside DaiBouken Drill’s left leg, but on the show so far, there’s no mention of it. It does help a little with balance, though, and eliminates extra pieces from lying around all over the place. Also, because Marine Diver is already kinda small, it makes the combination look a little off-balance. The rotating tractor treads on Gougou Drill cannot be used in this form either. 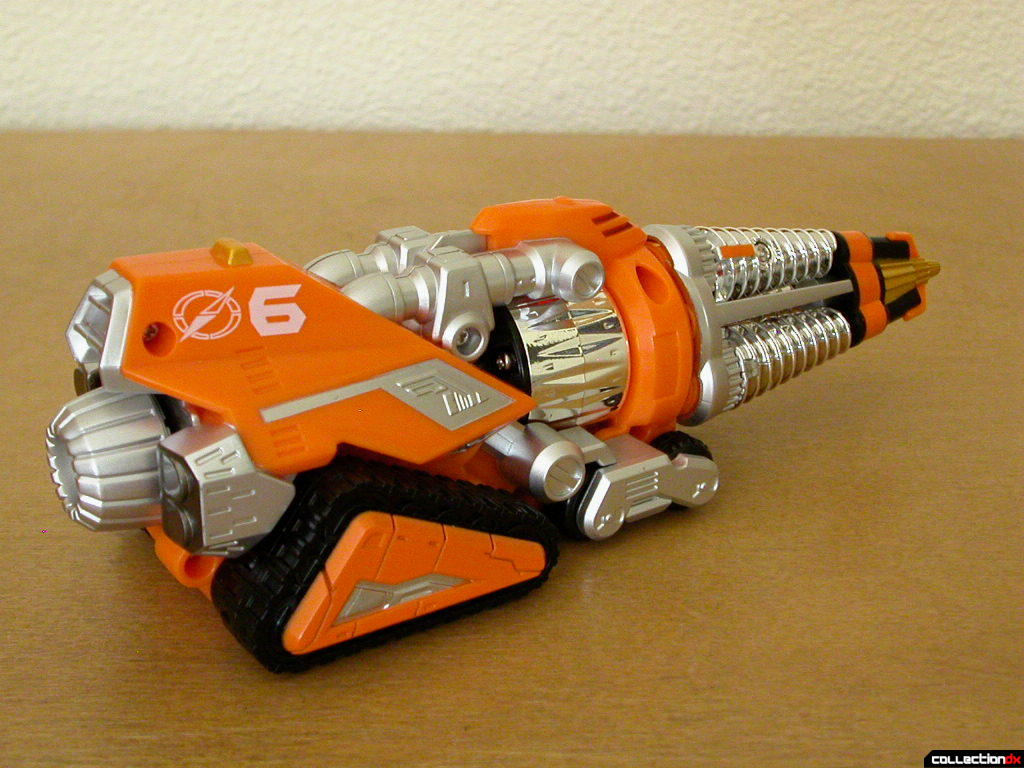 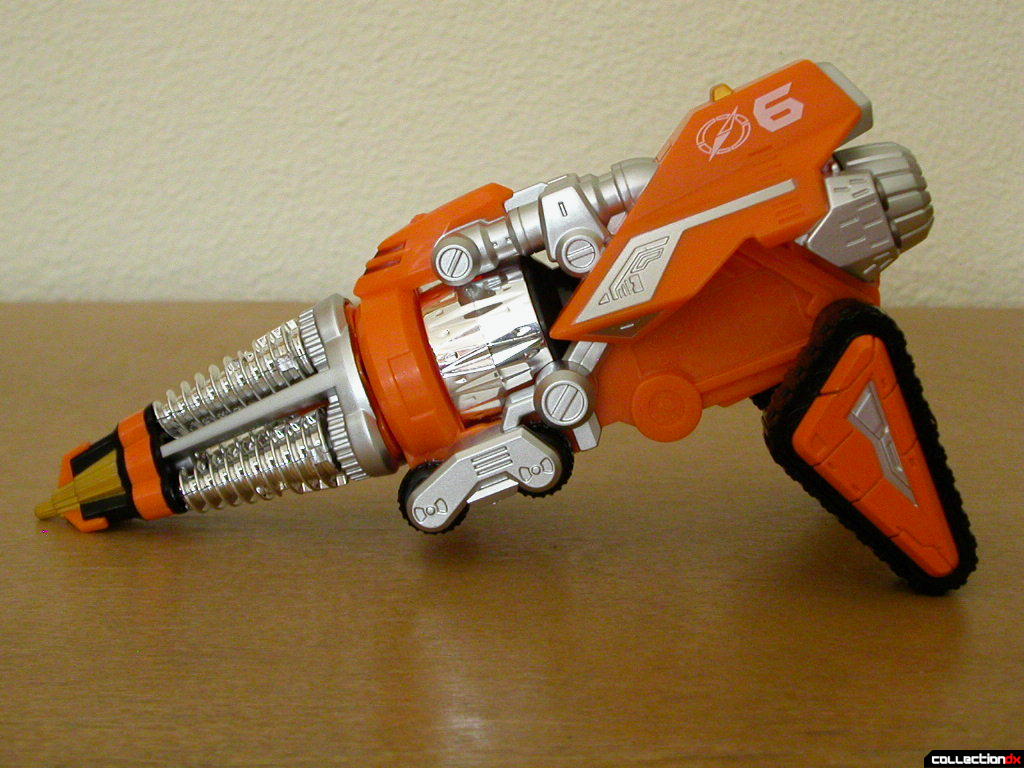 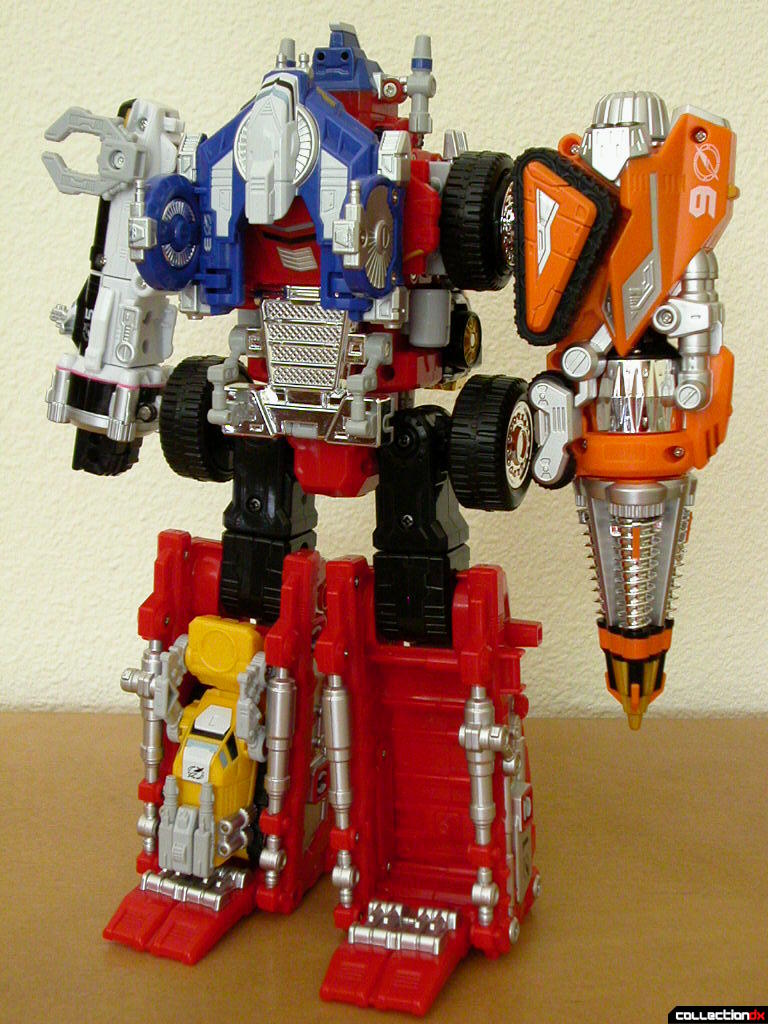 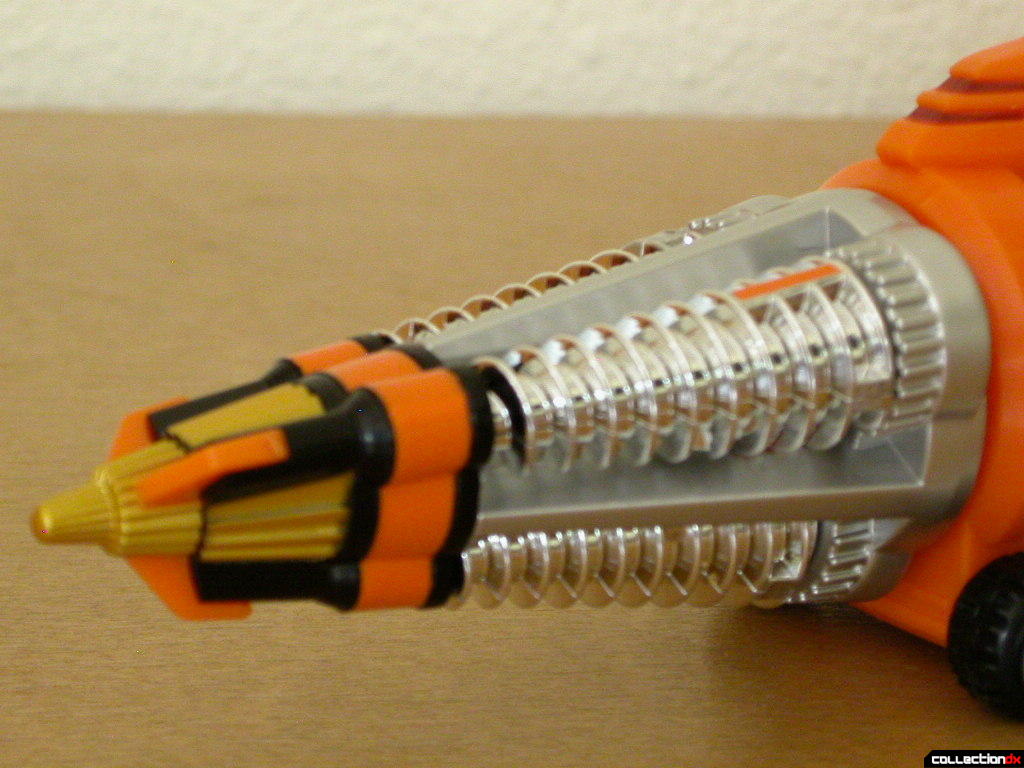 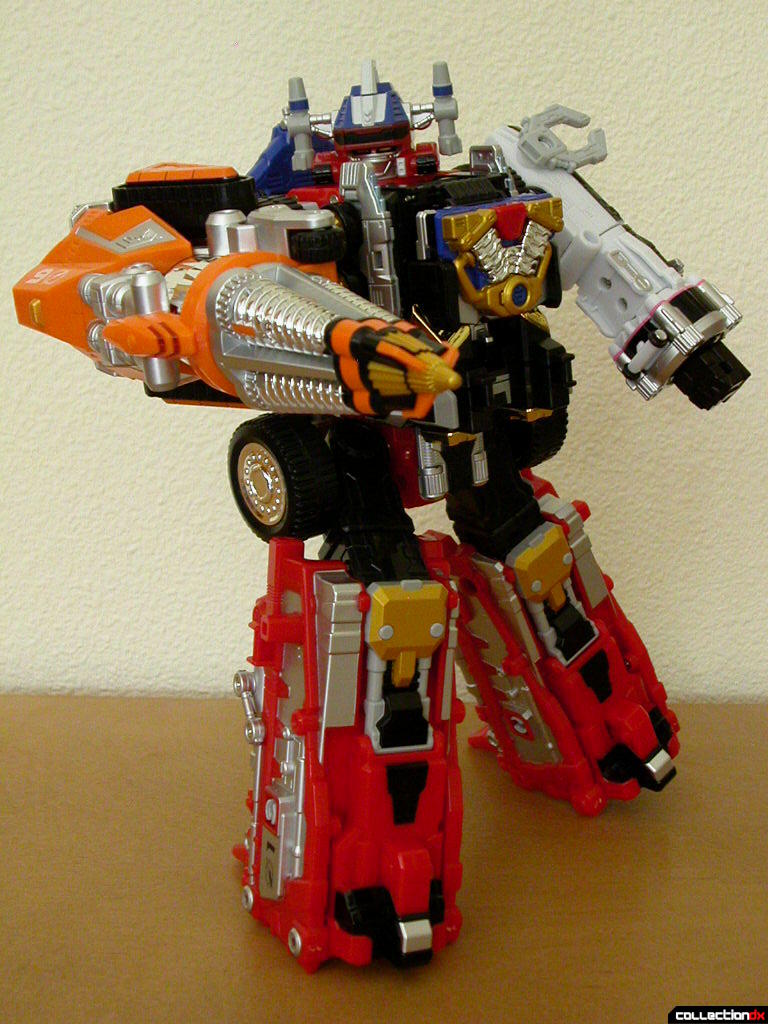 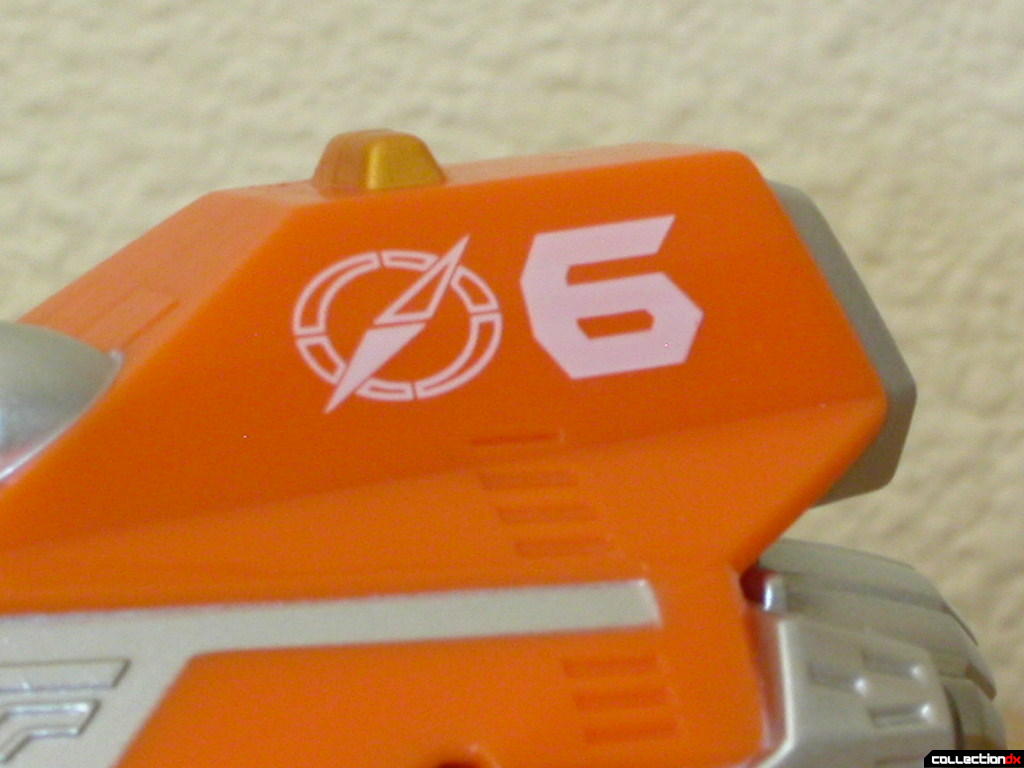 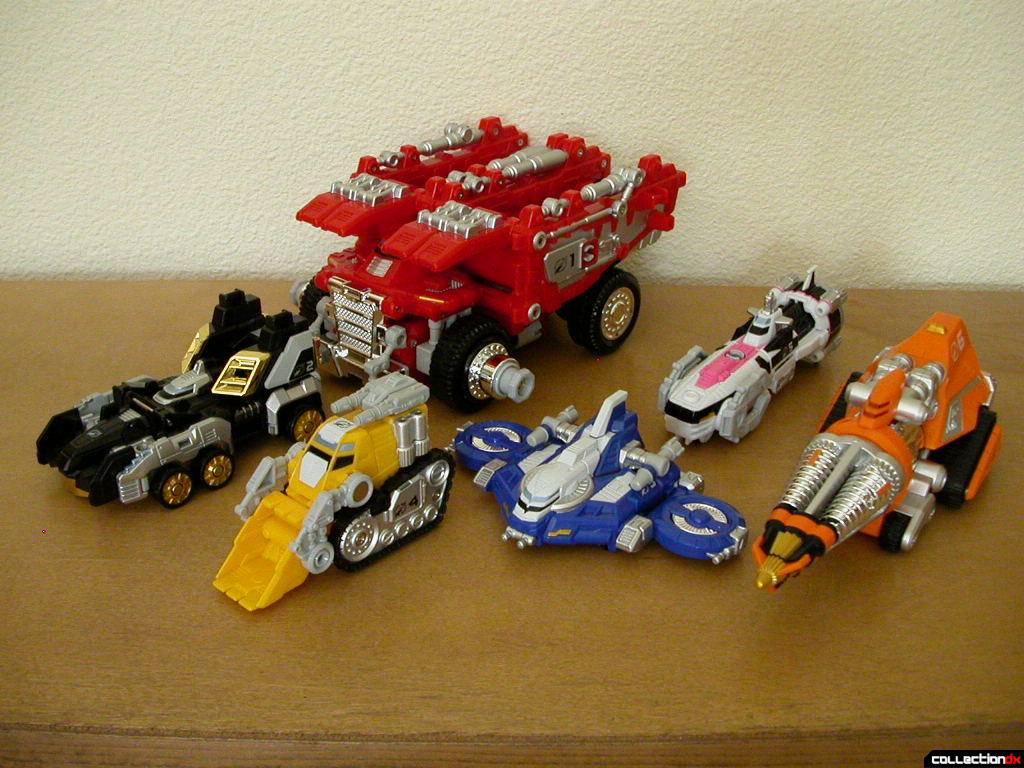