In the midst of a new series, Power Rangers always find a way to introduce a second or third Megazord to the stores before its appearance on the show. Such is the case of this guy.

The Magiranger TRAVELION comes to the US as the “Solar Streak” Megazord. Sort of a fitting name if you know where it comes from. Considering the US hasn’t seen its debut to the show, parents and kids don’t know what to make of this guy just yet. This makes for its lack of attention at the local toy shops. I’ve seen the Titan Megazord fly off and restock numerous times, and the Steedergon Fury Megazord, the US version of the Magiranger movie edition “Saintkaiser” just as much, but this guy sits unnoticed at the local TRU. Of course this is only a regional thing.

The SSM comes packaged in the more economic friendly and toy showing window box Bandai opted for with their Mystic Force Megazord series. However it appears to be completely assembled, the train engine that makes up the chest is off to the side, with a sticker in its place on the outside of the packaging. This would most likely be linked to their standardized packaging and the SSM’s broad, protruding abdomen.

The toy itself is exactly like its imported cousin, from my best examination. It carries over the electronics from the train engine, even the on/off switch. This is actually a nice touch compared to most toys where they come with electronics and they go off when you really, really don’t want them to.

With the more complex details already posted (see the hyperlink of Travelion above), I can go into the basics a lot faster.

Like any other transforming unit, the SSM maintains the formula: two cars for the arms, two cars for the legs. Now unlike the standard of five units, this guy uses six. That includes the front engine and the follow up car. A series of hooks and clamps are placed out in the ends of each component to allow the cars to hook together. Now be warned, the hooks are not secured, so don’t try to make the train fly or else its going to rain rail cars on your head. The main engine has a linked wheel pin in place so that when you roll the front wheel the second wheel turns via a pulley, a really nice touch for that authentic train feel. 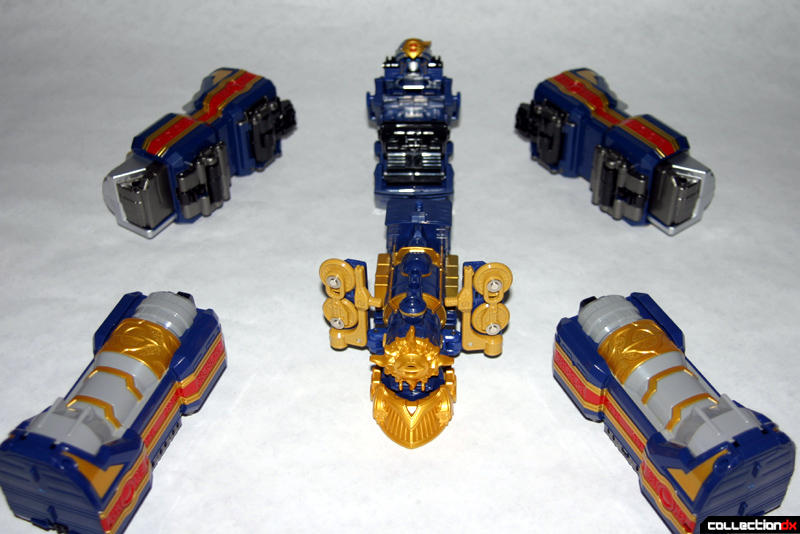 I’m not sure but I believe this Megazord fits the standards for a railroad set, however, I do not think it would be wise to have it compete with the 7:30 to Boston while on the same track. Nor those daring hostage situations where you hogtie your sister’s doll to the train tracks either.

With the secondary car making up the head and body making the train engine the centerpiece. Like all of the ‘chest’ figures in the Mystic Force/Magiranger line, it can connect to the Titan Megazord’s body. This feature allows you to swap its parts with the other as well. This can be accomplished by attaching these two ‘mini trains’ together and snapping them into the heart of the SSM’s body and then attaching the chest parts as you normally would onto the body of the Megazord. 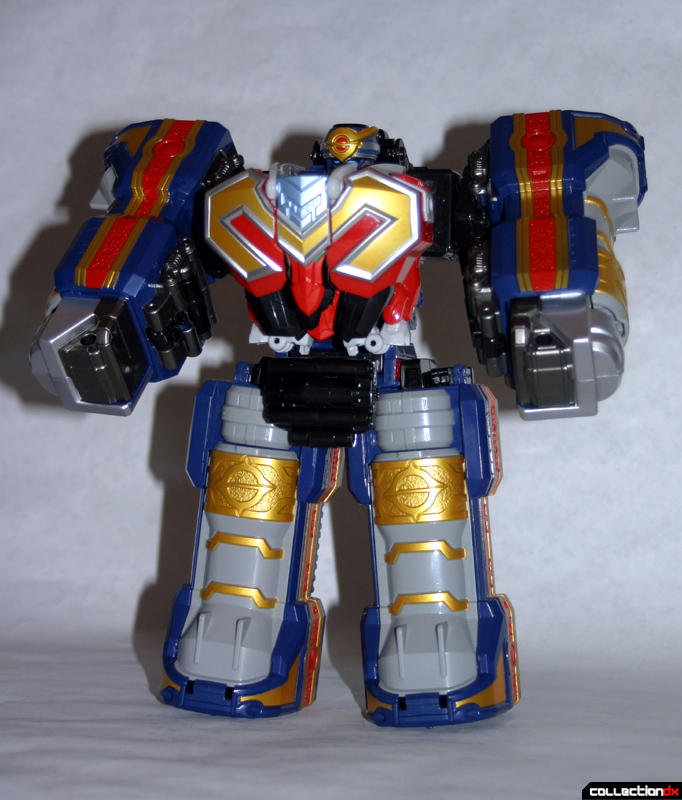 Personally I liked this guy. While I have yet to really see the character on the show I have seen bits and pieces thanks to the previous review on CDX of Travelion. All other reasons, because this is a really nice collection booster and the fact that nobody I know can resist a combining robot. Plus it’s a train set, now who could resist a good train set? My only dismay about it would most definitely be the price tag. Sure he’s large, but for what he’s made like, it just seems too high.

Exellent review, Gunpla. I had no idea that the SSM could combine with the Red Pheonix Titan zord, i thought it was a stand alone kind of guy err zord. :D But your picture proves that. Very interesting. :)