In 2015, Earth is under attack from mysterious, powerful beings called Angels. Their origins and goals are unknown, but the focus of their attacks are on the post-apocalyptic, high-tech metropolis of Tokyo-3- a city designed to be a hidden fortress for the secret headquarters of the United Nations special organization NERV. What makes the Angels such an imposing threat is their ability to project and manipulate AT Fields- natural, invisible, omnidirectional defensive shields which cannot be penetrated by any physical attack or weapon, including the most powerful N2 bomb. Learning of the Angels’ existence years earlier, NERV constructed a small group of advanced biomechanical robots called Evangelions to fight the Angels. However, only 14 year old children are capable of merging their minds on a near-spiritual level with the 700’-tall armored humanoids. Shinji Ikari is only one of a select handful who has been able to accomplish this. ...But he does not care. He has been push aside and ignored ever since his father abandoned him when he was four years old. And he does not care if he dies or lives, or if humanity dies or lives. Together with two female pilots in their own EVA Units- the confident, confusing redhead Asuka Langley Souryu; and the curiously silent, red-eyed, blue-haired Rei Ayanami- the abandoned son of NERV’s Supreme-Commander must face his inner demons and find the courage to go on protecting humanity while fighting to preserve what little is left of his own!

Ten years after the controversial and popular anime series aired in Japan, questions still linger about the mysteries, philosophies, and meanings of the show. The two films (“Evangelion: Death and Rebirth” and “The End of Evangelion”) which followed the confusing end of the 26-episode series served only to add fuel to the fires in online debates. Where do the Angels really come from? Why are such monsters named after messengers from the Heavens? What do the Dead Sea Scrolls have to do with predicting the future? Why are there crucifix-shaped explosions? What is the actual height of an Evangelion Unit!? To join in the celebration of the 10-year anniversary, Sega has contributed a new line of figures to the “Eva” saga. No- not the Children in school clothes again. No- not the Children in their plug suits again. No- not a new sculpting of the Evangelion Units again. No- not a diorama again. No- not the characters dressed-up in incredibly-fantastic outfits again. And, no- none of the characters dressed-up in winter clothing. Again. (They don’t have winters anymore, after Second Impact, in 2015 C.E., remember?) Nope, Sega took a different approach to two of anime’s most recognized characters. They turned two 14-year old girls... 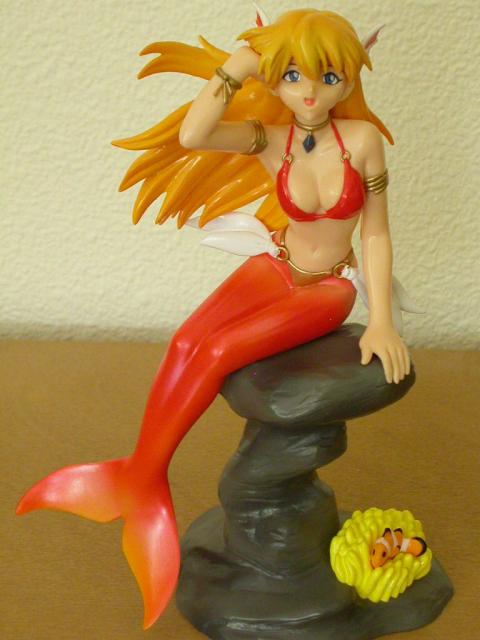 The confident and buoyant 14-year-old pilot of the red & orange Evangelion Unit-02 has undergone a radical change from her original human form... Asuka Langley Souryu has been transformed into a mermaid. Constructed completely of PVC, Asuka sits lightly & casually atop a pedestal of dark gray rock, accompanied by a lone clownfish. Her overall body shape matches that of herself and other female characters seen in the series: small pointed nose, large eyes, thin-yet-busty upper torso, wide hips, and long legs. Well- except for the fact that she has no legs here... 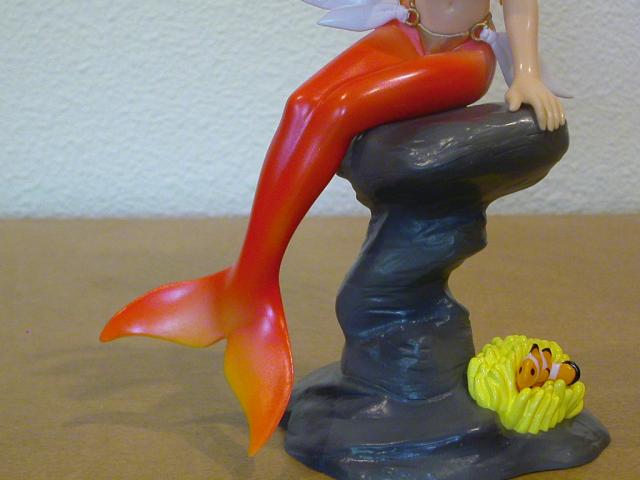 Her mermaid tail is painted a darker orange with softer light orange highlights. The tailfins are like those of a dolphin or whale. Continuing upwards, rather than having the tail be a completely original body part, a hint of distant parallel evolution is implied with a somewhat human knee halfway up her tail. There is an indent running across where her ‘thighs’ would be running from hip to knee, further suggesting that her legs had fused together rather than her simply losing them and then growing a brand new tail. For modesty’s sake, Asuka is wearing a bikini-style golden girdle. The girdle runs around to her backside as well, with a pair of flowing white, um- ‘scarves’ threaded through painted hoops. (One could think of them as ventral fins if they wished, though looking closely you can see that they are indeed tied on.) Unlike your average mermaid, this one has no fish scales. So the ‘skin-to-scales’ transition is only a change from the fiery orange tail paint to the plastic’s natural pale coloring just below her hips and allows for a very risqué view of her still quite-human backside which is protected somewhat by the girdle. 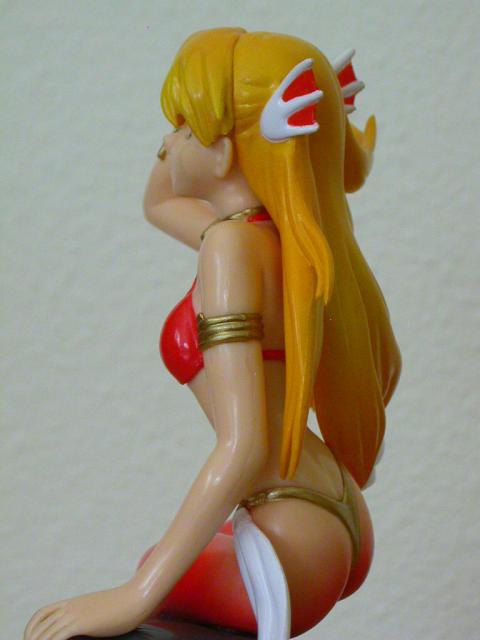 Around her thin upper body, Asuka wears a red bikini top held tightly around her busty chest by two painted metal rings on the shoulder straps. Around her neck is a painted gold choker from which hangs a small dark blue diamond. On both upper arms are golden metal ringlets, and she had a gold bracelet tied over her right wrist. In “Evangelion”, the teenage pilots wear nerve headsets to connect them mentally to the Eva Units. These hide under the hair for the most part, but two little colored barrette-like bumps appear on either side of the head. Asuka, for some strange reason, wore her headset all the time- even to school and home! But it looked natural in her long red/brown hair. What Sega did here was swap-out Asuka’s normal red headset with a pair of fish-like red-&-white fins placed in the same locations. If you didn’t see the series, they look like an accessory that a mermaid might wear; but for fans, it brings a knowing smile. They almost look like her ears, but you can clearly see that they are too high to be that. Asuka’s natural blue eyes look more like pre-applied decals than having been painted on; it’s hard to say. Sega opted to lighten Asuka’s long hair a bit more to give it a blond coloring and then sculpted it so that it looked like it was flowing through water. Asuka seems quite pleased and unconcerned with her new form by the look on her face, her posture on the pedestal, and the way she casually tosses her hair aside. As for accessories, Asuka has none. The pedestal-like coral stand she is affixed to is molded in simple dark gray PVC, but isn’t highlighted with any other colors. A small orange, white, & black PVC clownfish permanently ornaments the base of the pedestal, partially hidden in painted yellow coral. 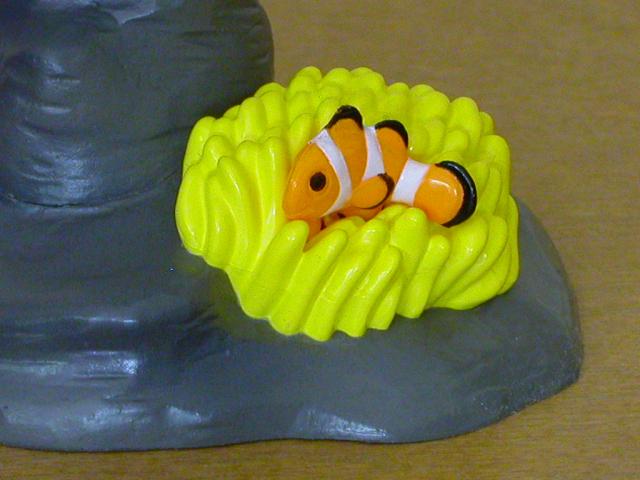 Construction is fairly well done. All parts have been glued on tightly, and do not move. They are also seamlessly put together, and it is hard to spot the separation points. The PVC is solid except for the base of the pedestal (which is open from below). Mold lines are difficult to spot at first and are perhaps most easily spotted on, again, the pedestal. Asuka is shipped in a mildly aqua blue-decorated cardboard window box with a retracting handle, sandwiched between solid and transparent plastic inside. Since there are only two mermaids in the series, each character appears on either side of the box. 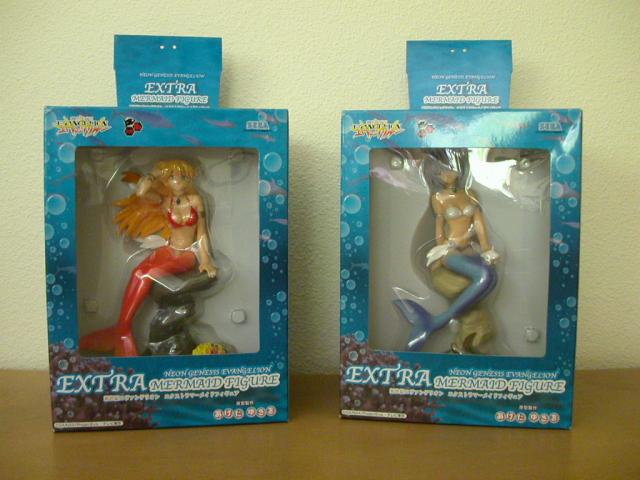 For a first outing, the limited Extra Mermaid Figure series by Sega started out well. Both Asuka Langley Souryu- and fellow EVA pilot-turned-mermaid, Rei Ayanami- have different expressions, poses, accessories, and overall looks. There is little if any criticism I can offer, let alone suggestions for alterations. I especially like how well sculpted her hair is, and how smooth and flowing the shape of her tail is. I also like how different her attitude is from Rei’s- she likes and is completely comfortable being a mermaid! If you are a fan of immobile figures, this is a change. If you are a fan of Asuka Langley Souryu and Rei Ayanami, this is a change. If you like “Evangelion” in general and are looking for a change, this is it. I got mermaid Asuka-chan and mermaid Rei-chan because they were different. Any model company can dress up a favored character in interesting-looking clothes from different era or environments... But change their species!? That’s different! I recommend getting Asuka Langley Souryu from the Extra Mermaid Figure line, if you can find her anymore. She’s cheap, she looks good, and she seasons your figure collection up a bit. 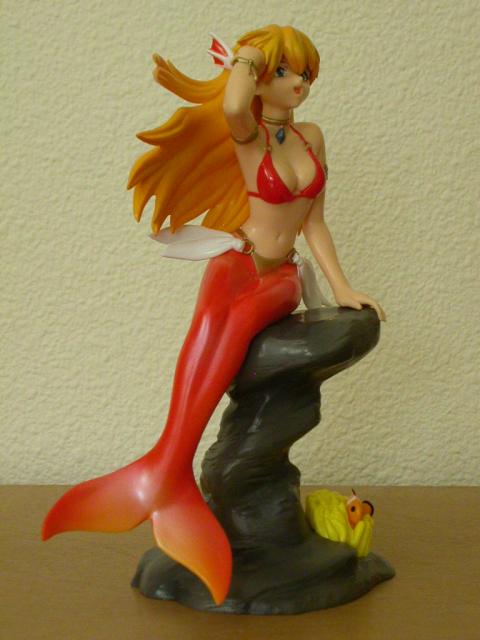 Well... maybe not that way!

9 comments posted
I do humbly apologize for

I do humbly apologize for not posting this sooner! The review and a few photographs was sitting there for near two years, but difficulties with my damned camera (which I still have to fight today!) meant I ended up taking both new ones, and mish-mashing them with the old ones to get the coverage of Asuka that I needed.

And now, please, no discussions in here of moe and/or fixed-pose female figures on CDX ; we've already had those elsewhere, and we don't really need to air that argument out again, do we...?

I think you should humbly apologize for posting this at all!

I have nothing to be ashamed of.

I've just double checked my Eva DVDs and they definitely spell it Sohryu, so I guess as far as the English dub is concerned that's the correct spelling.
In terms of the romaji I'd guess its Soryu, but that would really depend what kana they use.

Well, like many of the mostly-female characters in "Evangelion", Asuka's last name came from the Imperial Japanese World-War II aircraft carrier which was destroyed at the Battle of Midway, and they spell it Soryu, so I was beginning to wonder... (Indeed, her middle name comes from the WWIII American carrier, U.S.S. Langley [CV-1].)
And, of the people I speak with, and in both the sub & dub, it's pronounced in a bunch of different ways as well (as much as her first name), so that lends to the confusion.
------------------------------
CollectionDX Staff

I got this promotional standing character from Kadokawa, it says Sohryu...

Anyway... a mermaid pilot is a bit strange on my book...

There. See what I mean?

One advantage to being a mer, though, would be not having to go through the same kind of trauma each time they fill up that Entry Plug with LCL. We don't see it each time, but I'm sure their lungs hurt for a while after disembarking...
And should I even mention that human vocal cords cannot project coherent sounds when immersed in a liquid, or did no one here see "The Abyss"? ;)
------------------------------
CollectionDX Staff