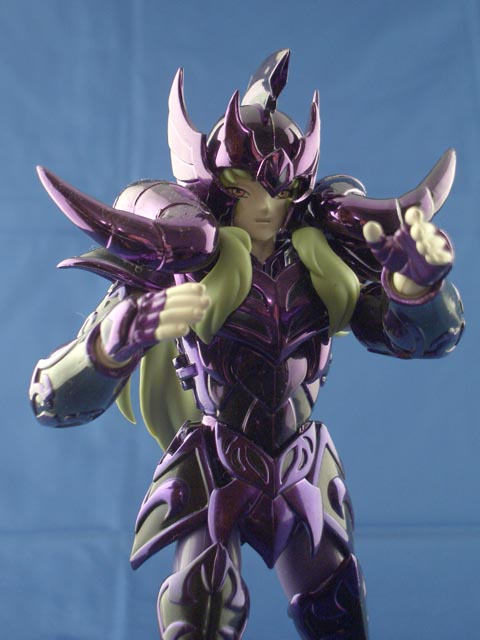 I blame Ken for what has become a fairly unhealthy obsession with all things Saint Cloth Myth. It started when he approached us a little over a year ago asking if we would be interested in reviewing figures from a series called Saint Seiya. While the series has not taken off in the states it is HUGE outside of the States. I had seen the characters designs over the years and while my curiosity was piqued by what I had seen, I had never made the effort to look in to it. 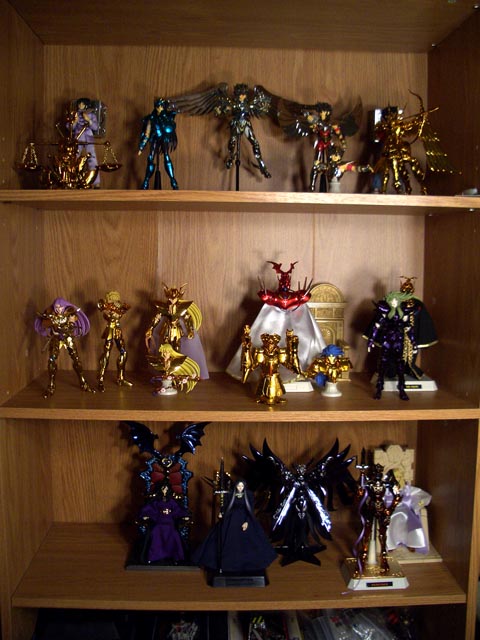 Little did I know what would start out as mild curiosity would turn into a full-blown obsession. There’s just something about the process of putting together one of these figures combined with the presence they have on the shelf when finished that makes you want more. One Saint Cloth Myth figure looks good, several together look great. Well after 1 year, 114 episodes of the TV series, 31 episodes of the OVA series, 4 OVA movies, 1 animated feature film and 21 Saint Cloth Myth figures and 4 Appendixes later, it's official… I’m a Saint Seiya fan boy. So this time around I am reviewing Aries Sion.

From Wikipedia : “Prior to the start of the main story, Sion served as a Saint on the previous generation of Athena Saints. In the beginning of the war against Hades, Sion was promoted from Bronze to Gold Saint of Aries.” 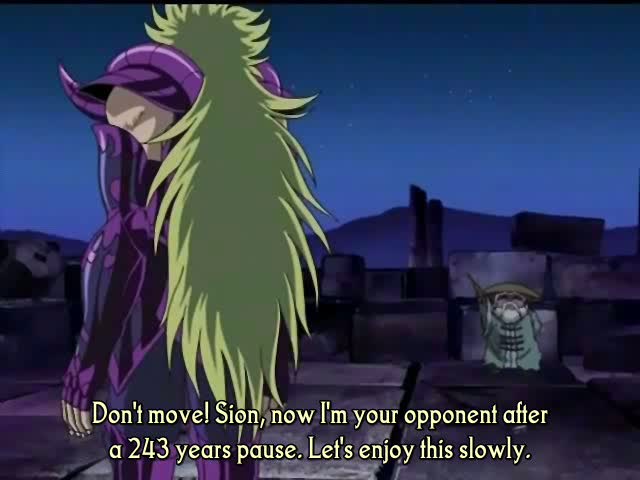 “Under the guidance of Athena, gold saints Aries Sion and Libra Dohko set out to lead the saints in an invasion of Hades' domain, the World of the Dead. Much of the war ended in bloodshed and annihilation, with the saints having to resort to the Libra Weapons -- a move that Athena herself normally frowned upon. There many casualties in this war -- both saints and spectres alike. The last two survivors of this struggle were the Gold Saint of Aries and the Gold Saint of Libra.” 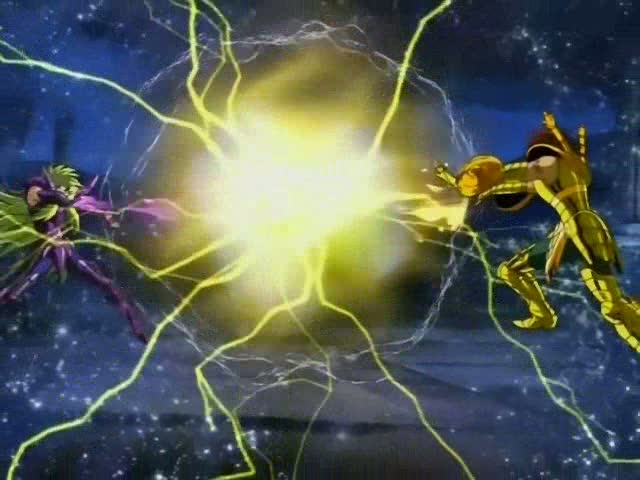 “After the war, Dohko would be assigned with the task of watching over the seal on the souls of Hades' 108 spectres, while Sion would go on to become the new Grand Pope of the Sanctuary, with the main duty of preparing new blood for the next Holy War.” 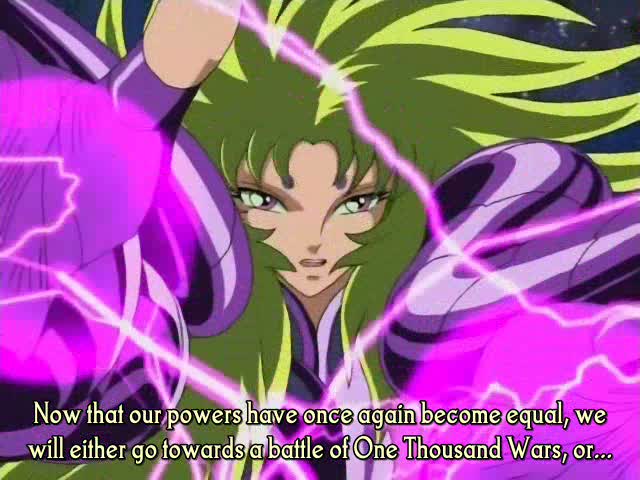 “Upon becoming the Grand Pope, Sion could no longer perform the duties of the Aries saint as he had previously done - thus, he began to train an apprentice to succeed the cloth. Sion found that successor in Mu, an extraordinary young man of the same race as Sion with a natural talent for cloth reparation. Mu not only became the new Gold Saint of Aries, but he did so with all of Sion's abilities under his belt.” 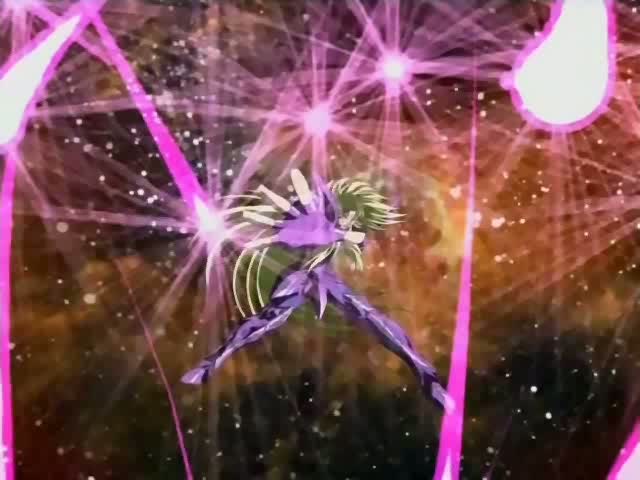 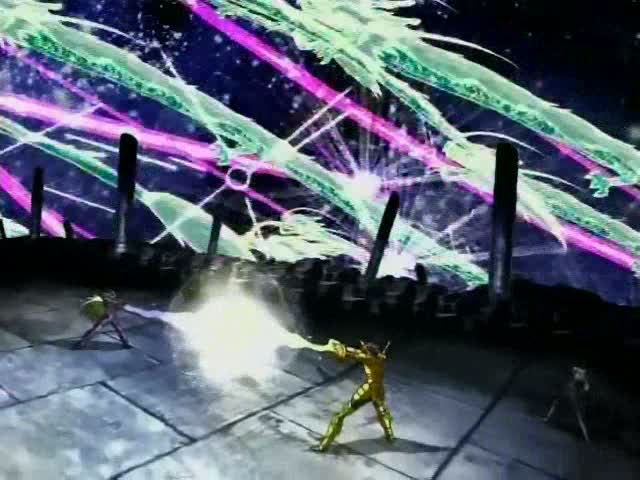 “Unfortunately, Sion was confronted by Saga in regards to his decision shortly after the announcement. It seems Saga felt discontent at Sion's choice, and demanded an explanation for it. Sion revealed that, while he acknowledged that Saga had a heavenly reputation and was the more powerful of the two, he could not help but senses something terrifyingly dark within the Gemini Saint. It is at this point that Saga confirmed Sion's suspicions, and assaulted the weary Pope with a deathblow.” 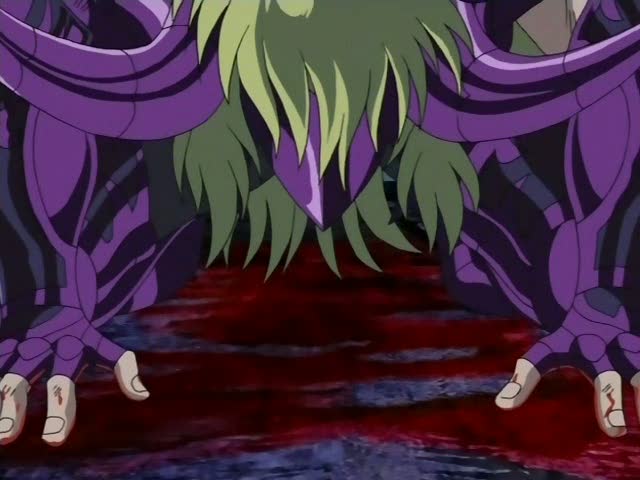 “In Meikai, the realm of the dead, it was announced that Hades would attack the Sanctuary and unleash the Greatest Eclipse on the World, this left the dead saints in a predicament, because they were dead and unable to do anything, but opportunity arose when Hades told them that, if they killed Athena they would live again then, not even death could keep Sion away from aiding Athena in her Holy War against Hades. Even after years since his assassination, Sion returned from death to help Athena and the current saints with a way to get into the World of the Dead. Originally, it was assumed that Sion, along with other deceased saints such as Saga, Shura, Camus, Deathmask, and Aphrodite, had sold their soul to Hades and returned to Sanctuary to kill Athena. It turns out that this was a grand scheme by the former Pope and the dead saints in order to get a message to Athena -- that she must commit suicide and consequently awake the 8th sense if she hoped to successfully defeat Hades within his domain.” 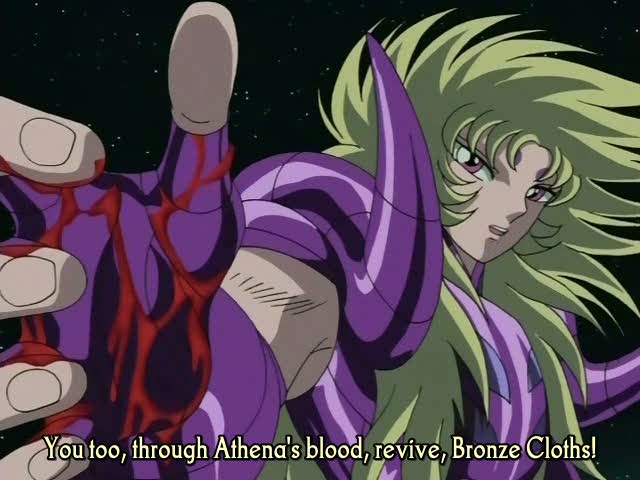 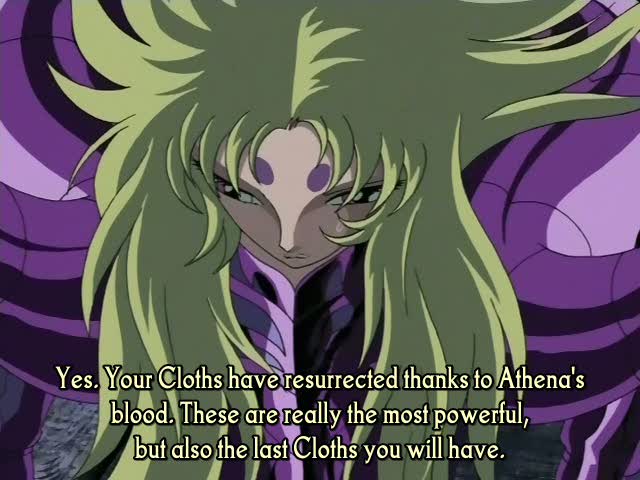 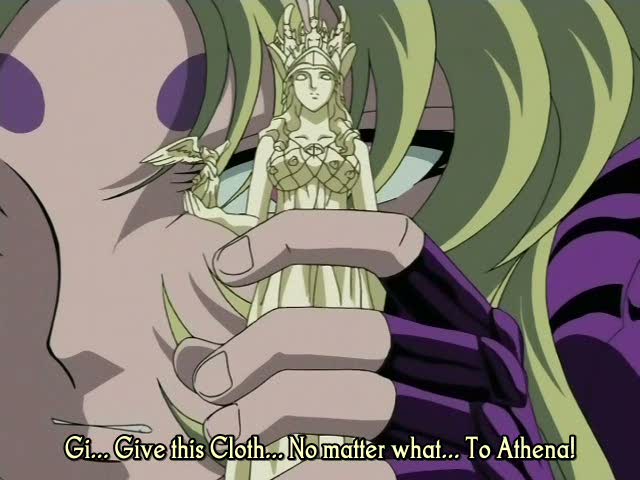 “After the message had been delivered, Sion met with Seiya, Shiryu, Hyoga, and Shun to inform them of the truth of what had taken place with the gold saints and Athena. Perhaps as a nod to his apprentice's talents for armor reparation, Sion instantly restored all four saints' individual cloths using the blood of Athena. Finally, with his last act as the Grand Pope, Sion commanded the young bronze saints to invade the World of the Dead -- they shall not stop until every spectre has been defeated, and Hades himself is on his knees.” 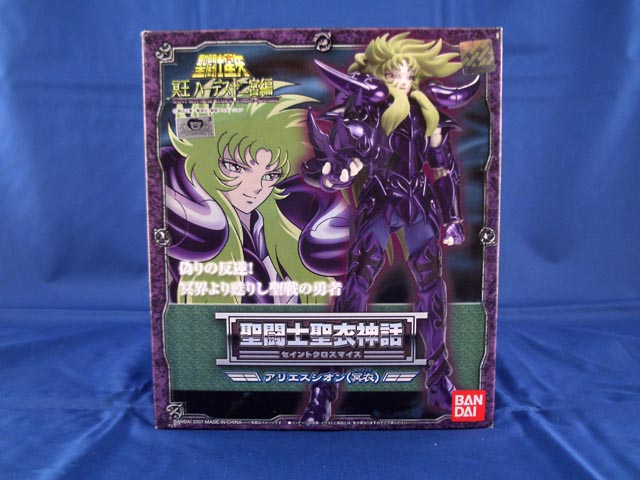 Bandai really puts a lot of love and attention into this series and it all starts with the package. Traditionally Saint Cloth Myth comes in a book-style package that opens up to reveal two windows with the figure and all its parts and pieces neatly arranged for all to see. Included in the box is: 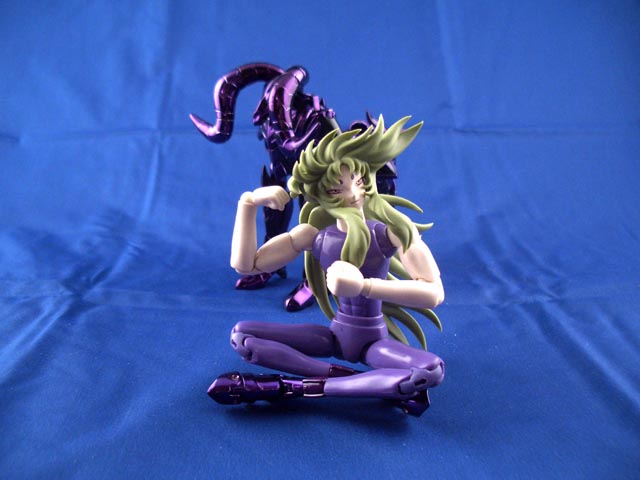 The figure itself is made of plastic with the feet being made of die-cast metal. Bandai chooses to use the newest Generation 3 body type (which features over 40 points of articulation) for Aries Sion and stands about 7 inches tall. The figure looks a bit spindly without the armor on but to be honest that is not a big deal. It’s all about how they look with the armor on and Aries Sion looks good. 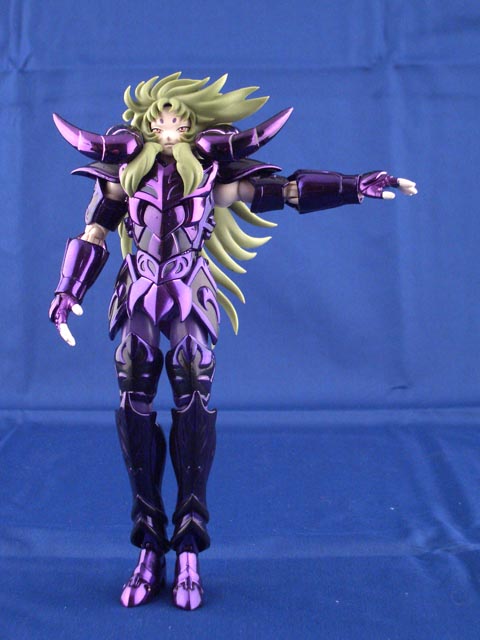 The armor or cloths in this line are almost all made of die-cast metal and is the real draw to the line. The armor is always beautifully detailed and I am continually surprised with the general high detail and quality of the series. 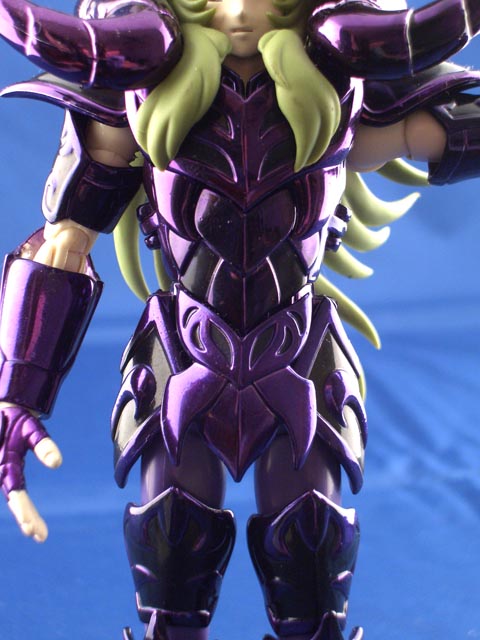 The Cloth here is actually referred to in the series as a Surplice (all of Hades minions wear Surplices just as Athena’s Saints wear Cloths or Poseidon’s generals wear Scales) and uses the original Aries Cloth sculpt created for the Aries Mu. Other than the different black/purple color scheme and a new head sculpt it is 98% identical to Aries Mu. The only two differences I can see are the front armor cod piece isn’t on a hinge like the original Mu release and the Ram horns don’t plug into the back of the armor as well as the original release. It is a bit finicky to get it on but once you do it will sit there as long as you don’t pick up by the shoulders. I’m not sure if I just got a bad piece or if something is different but as nice as these figures are they are still mass produced so getting a flaw is going to happen from time to time. 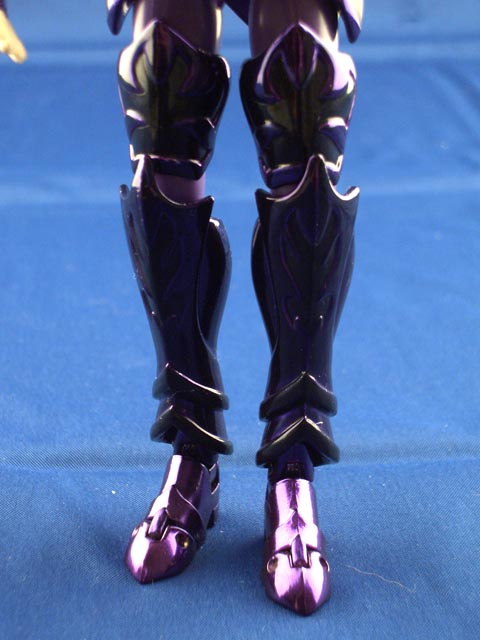 These complaints are more nitpicks and neither really detracts from a beautiful representation of the character from the series. He still looks good paired with later self, Grand Pope Sion. 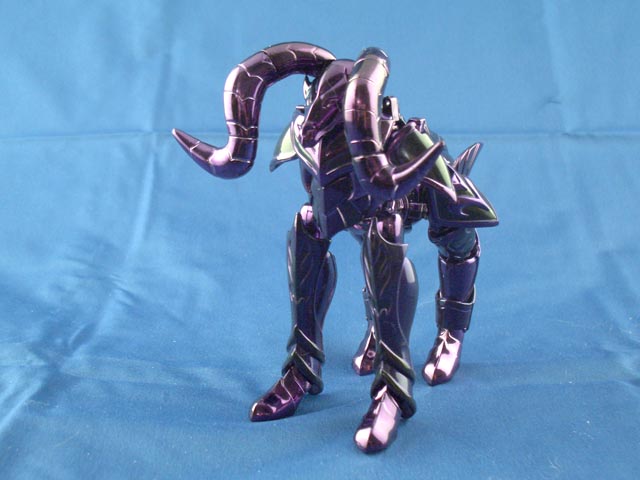 Each armor in the Saint Seiya story turns into a statue of the constellation that warrior is aligned to when not being worn. Most armor is not seen in the series this way but Bandai does include a base statue in each release to put the armor on to and form a statue of the constellation. The Aries Gold Saint is of course a Ram, so needless to say Aries Sion’s resurrected armor makes…a ram. Yep looks identical to the Aries Mu release just black/purple instead of shades of Gold. 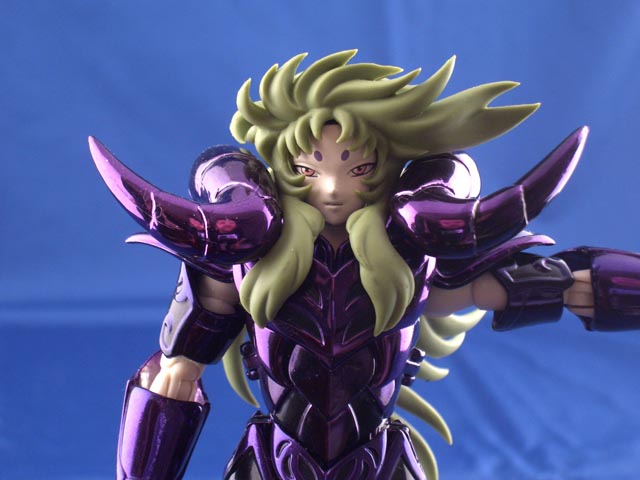 So basically Aries Sion is nothing more than a repainted Aries Mu figure, but I knew that when I ordered him. I’m a fan of both the series and figures so I wanted to complete my display by pairing him with his earlier self, Grand Pope Sion. The resurrected Sion is a worthy addition to your collection IF you’re a fan of the Hades: Sanctuary story arc and you are a completist. I wouldn’t recommend it to non-fans as it’s not an overly striking design and a fairly obscure character to boot. 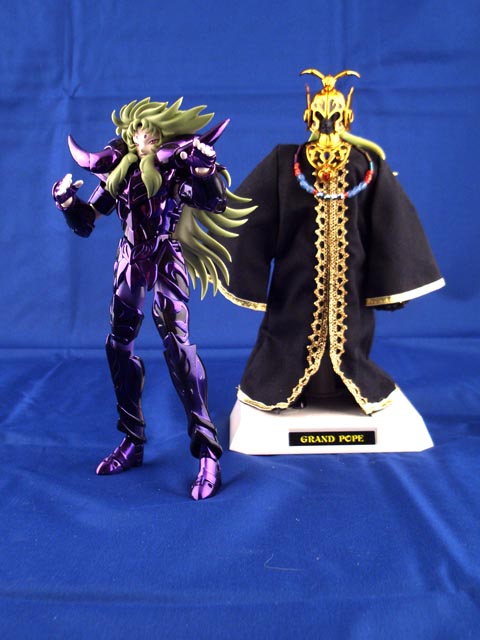 A video review is included below.

5 comments posted
I'm not a huge fan of the

I'm not a huge fan of the character or the design so this is a pass for me. I do really like the color scheme and how well it is done on the figure though. This has got me excited for the Capricorn Surplice. Assuming it is as high quality as Aries here and I'm sure it will be then Shura is going to be a must buy for me.

Nice review.
Just a little correction
All six dark gold saint surplices are inspired by their gold cloth but are different. the general shape is the same but all the details are different.
This aspect is what makes this figure really stand out (and I can't wait to get Saga's surplice). Here there's a pic I found of Mu with aries gold cloth and shion with his surplice. you'll notice that the armors are different and not just repainted.

I was wondering about that as I was reading the review. I thought to myself "Why did they just recolor Aries Mu's Cloth when Gemini Saga got a new mold?". Thanks for pointing this out. I could see in the anime that the Gemini Cloth and the Gemini Surplice had some design differences, but I think they are more subtle here.

I like the purple and black color scheme of Sion's armor. Not to mention his chops! He has one of the more memorable hairstyles in the Saint Seiya mythos.

i just got sion today and i gotta say i like him alot. fortunately i was able to put him together quite easily, although the rams were hard to put on. he does stand on his own and his joints are really tight. sometimes you do get cloths with defects but it doesn't take away from how cool and shiny they look. thanks for your reviews, i look foward to seeing your review of hypnos even though i have that bad boy already next to his brother. i think i am moving passed denial and i am admitting that i am a hardcore saint seiya fanboy as well as a fan of the myth cloth line.