Today I'll be reviewing the mecha Alteisen, which hails from the extremely popular gaming phenomenon know as Super Robot Wars.

I usually like to write a little something more in-depth about the background of the toy I'll be reviewing but, to be honest, I have no idea about this figure. I only recently became aware of this figure when, at the 08' SDCC, Kotobukiya gave us a model of this figure to review. Fellow CDX member Anavel built it and he reviewed it here. After I read his review I really took a liking to this particular robots design aesthetics. So when I learned that Banpresto made a chogokin version of the robot I knew I had to get it.

To start off with, the packaging looks great. It features a nice picture of the actual toy that your getting and a silhouette of that toy in the background set in shades of red. You can see that Banpresto's parent company, Bandai, may have had influence in the style of the packaging. 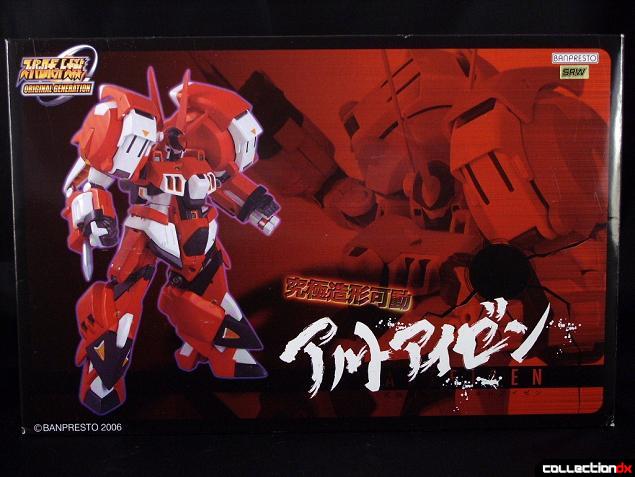 Moving forward, after opening the box you are greeted with what may be every chogokin collectors favorite style of inner tray. Ah, drink in the beauty of the photo below...the retro look and feel of pure white Styrofoam goodness! 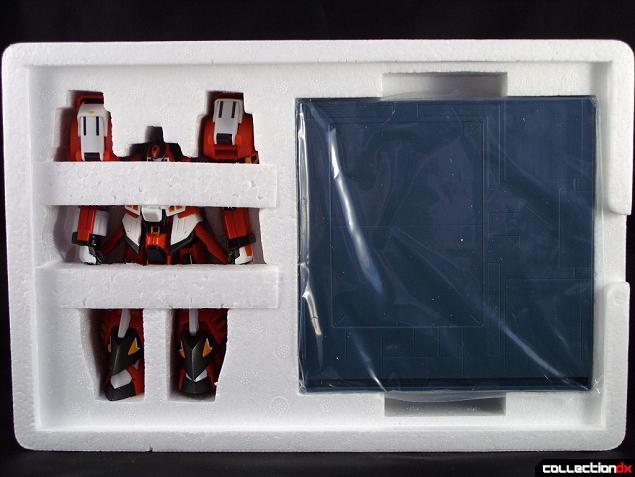 Removing the toy from the box, you are required to do some very minor assembly, like putting on the 3 head antennae and assembling the docking base. You can see in the photo below that the minute of toil is well worth the end result. The Alteisen just looks fantastic displayed in the included docking bay. 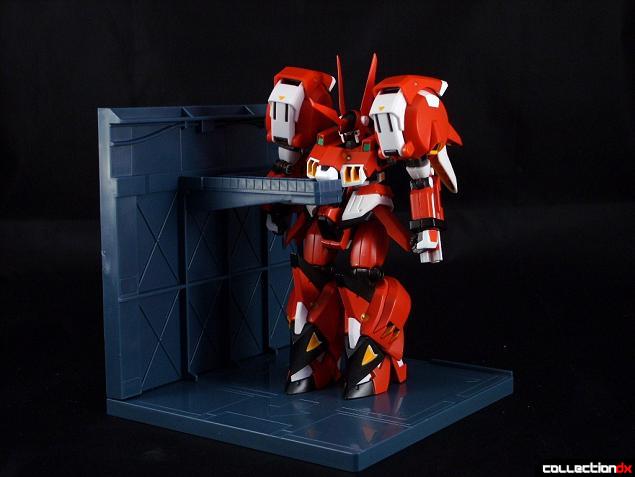 Here is a closeup of the highly detailed head. Note that you can see the 3 antennae that I mentioned in the above paragraph. 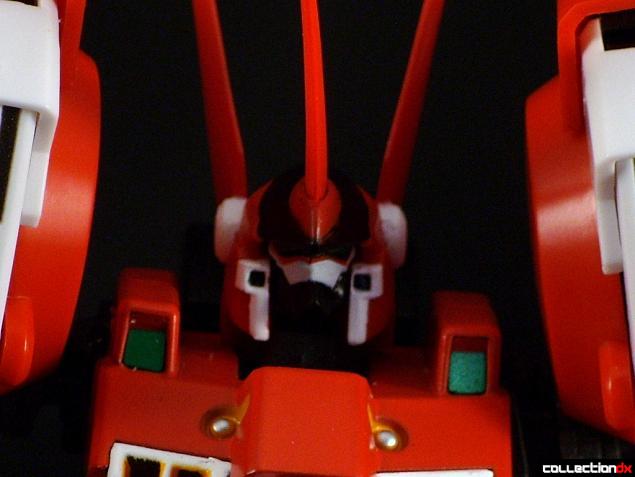 Ok now, on to the figure. At first I was delighted to feel the heft of Alteisen. The 6.5 inch figure has a ton of die-cast content. The die-cast can be found in the chest, waist, groin, forearms, thighs, calves, and feet. The rest of its body is comprised of PVC and plastic. The Alteisen has nice tight clicking ratchet joints with lots of articulation but, it is limited by the bulky armor design of the figure. During the time that I was running the figure through the paces of trying to get some cool poses, I was shocked when I heard a snap and the left leg at the hip went limp. The ratcheting mechanism broke! To be clear the leg did not fall off. The figure can still pose but it no longer has the tight clicking in the left leg and now relies on the support of the right legs ratcheting joint. As you can see below it can still hold itself up. 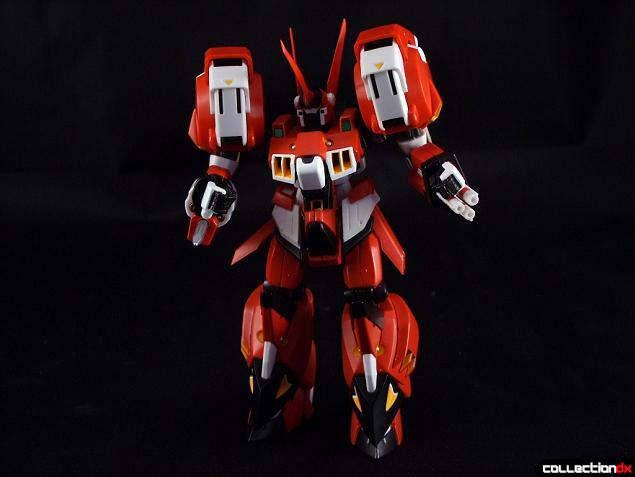 On to the gimmicks! The first really cool gimmick that I want to talk about is shown in the next 5 photo's. The gimmick is called the Revolving Stake. The feature is basically an old school style 6 shooter revolver that makes up the right forearm of the robot. Check this out! The barrel actually can revolve, the cocking pin is spring loaded and can be released moving the stake forward. But wait, that's not all! The barrel can be swung open and you can remove the spent shells and the figure even includes a re-loader that can fit in one of the 3 included extra hands allowing you to pose the figure like its re-loading during battle. Cool huh? 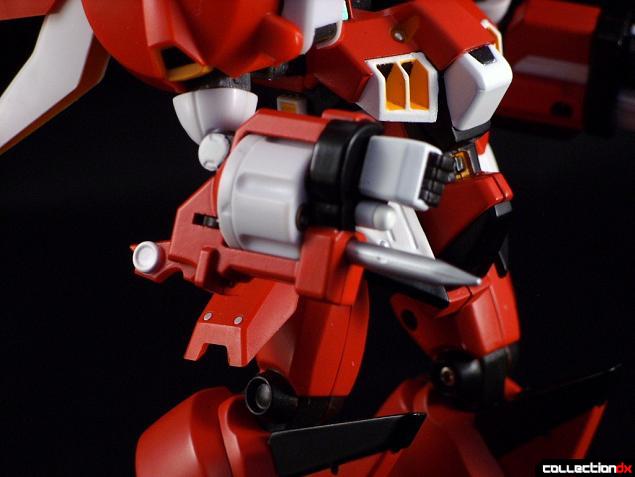 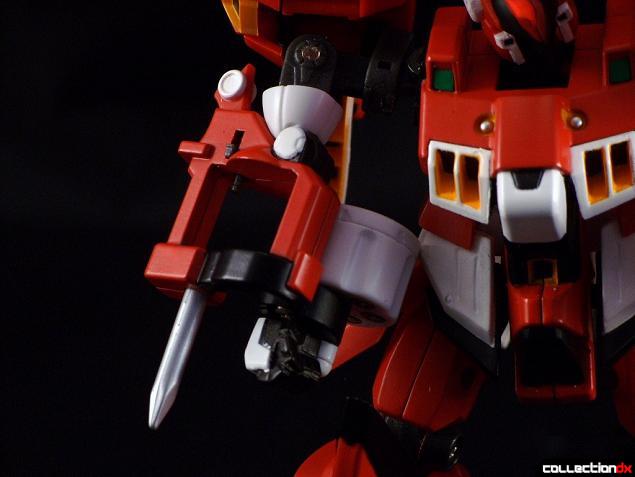 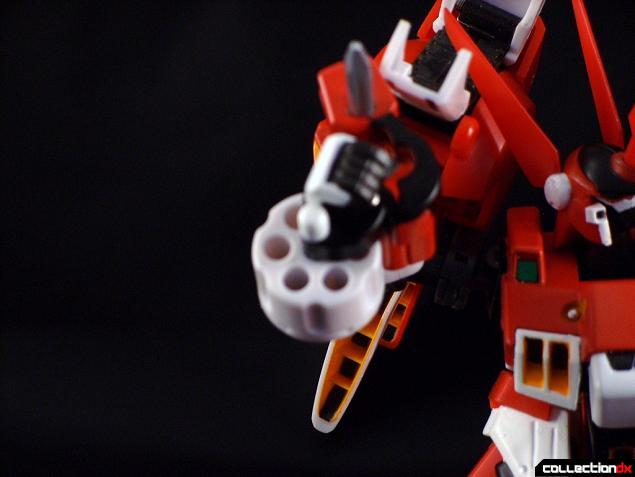 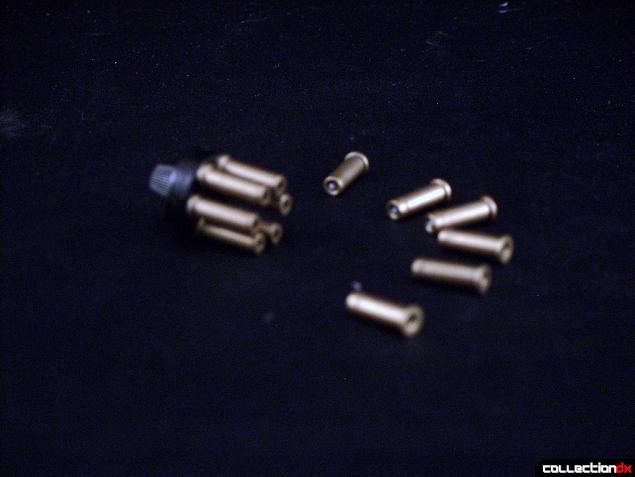 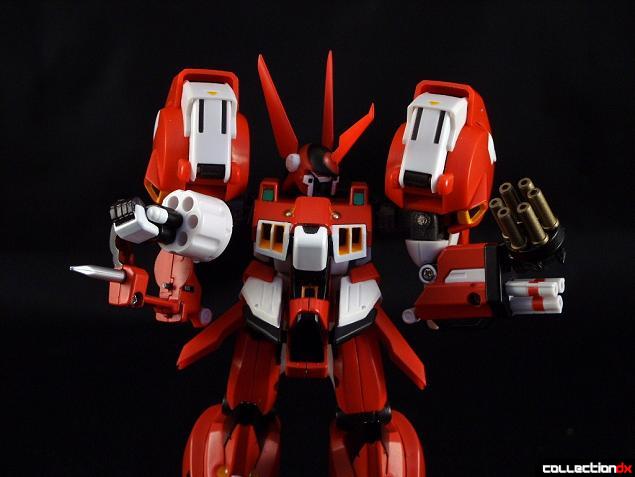 The next cool gimmick featured in the picture below is called the Square Claymore. Weird name aside, it is actually a series of shoulder mounted cluster style bombs that are revealed when you open the spring loaded hatches. Also note the pair of open hands in the picture. 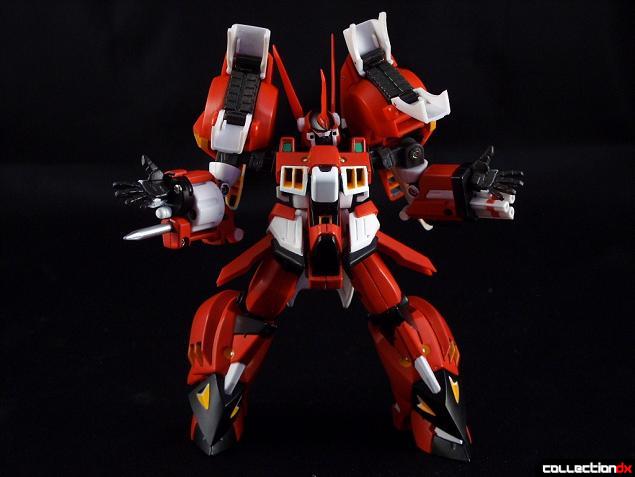 The last 3 pictures give you a walk around of the figure. A few last things I want to mention. The flaps that are mounted on the rear of the shoulders can move up and down, the jet nozzles on the back pack can be moved. Also, check out the cool triple machine cannon on the left arm. you have to admit this is one bad looking mech that is armed to the hilt with goodies. 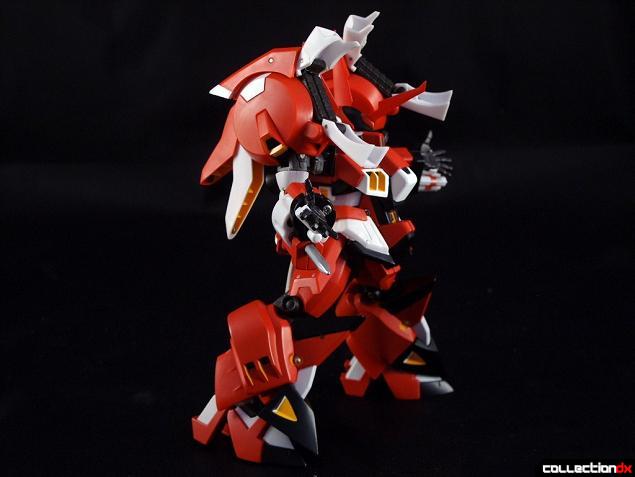 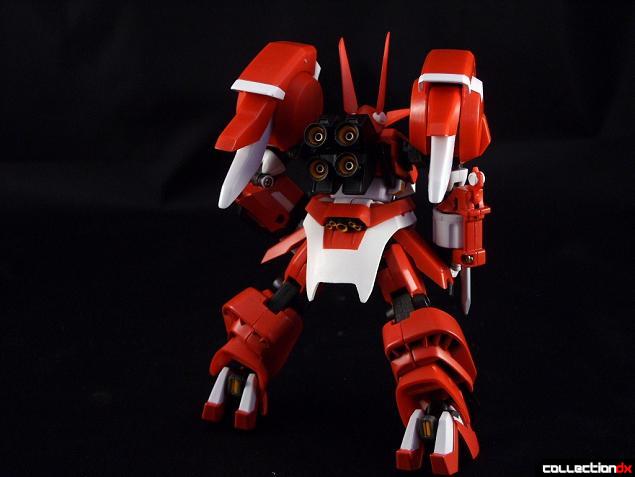 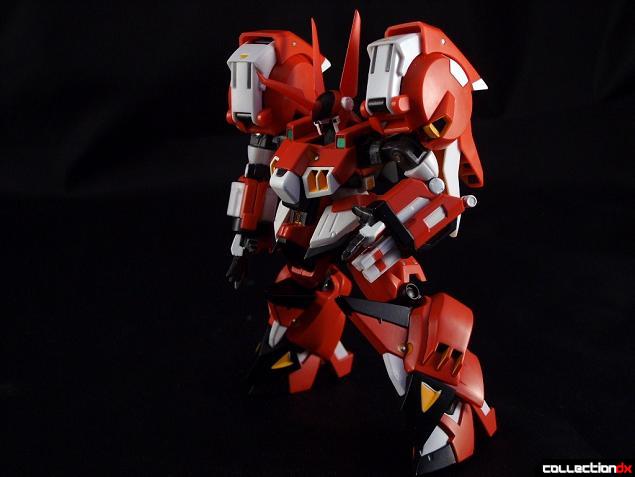 In conclusion, this figure really has me torn. I do love the heft of the die-cast and the design. I also love the gimmicks the figure has. I guess I'm just really put off that the leg ratcheting mechanism broke the first time I moved the leg. To be fair the ratchet mechanism breaking may be isolated to my figure. So basically, if you like this character you may like this figure, just be careful, display only.

The hip ratchets on this figure are widely known to be excessively tight, but I had never heard of them actually breaking (though I can believe it, as the joints make me a little nervous on my own figure). Comparatively, my Unifive/Banpresto/Bandai Huckebein Mk.II figure from the same series had his entire left leg snap off at the hip the first time I tried to move it. Hmmmmmm.

The joint system of the entire Alteisen figure is very oddly designed, with the way the waist and hips are articulated at odd angles that give it flex you wouldn't think it should have. The comment I've made to people is that it's like a testbed for odd jointwork, eheh. It makes it slightly complicated to repose (a bit like a revoltech figure), but gives it a lot of range.

It's a real pity that yours broke, because with working joints, the figure is surprisingly flexible and dynamic considering its bulked up design.

Thanks for the sympathy on my figures hip breakage and you have my sympathy on your Huckebein, which I also have and will put up my review shortly. all I can cay is, thank god this figure looks cool just standing in its docking base.

this version has exactly what I wished the model kit version had.... A speed loader..
the design of this robot it total awesome all over.

curse you Shogundan... now i'll have to explain to my missus why I spent more money on a toy "that looks the same as one I already have"... O.o

ahh finally a review for the unifive alteisen,i might buy him but those ratchet legs really freaks out ^^;.......but hey he is not that expensive anyway :) thanks for review man!!

Oh wow I love the design of this. Call me weird but I've always really liked fat/bulky robots. Plus red is my favorite color. Something else to add to my list of stuff I want.

It was a good try. But the shoulder joints are too basic. They stick out too far.

Where do I begin, the leg joints are so wierd. Everytime I try to pose it, there is great fear. Especially since my max factory GGG hip joint just fell apart in my hands.

Other than the fact that I sorta got a lemon when I purchased my Unifive Alteisen (the right square claymore container wouldn't close properly)and that one of my cats pissed all over the box, I rather like this figure.

If you can get it at a reasonable price (5500 yen is more than reasonable, because the original price was around 13000 Yen or somethin'), then I recommend you to get it. Although the plastic is thin, it is quite flexible and can prevent breakage. Never had a problem with the ratchet joints either.