Avatar: The Last Airbender, is simply one of the best cartoons on TV today. It has a great story, great characters, fantastic animation, and it doesn’t insult your intelligence. Both a 13 year old and a 33 year old can enjoy it. It’s one of those shows that when it ends you can’t wait to see where it goes next week.

I’ll let Wikipedia sum up the story for you:

Avatar: The Last Airbender is set in a fantasy world on a planet that is home to humans, fantastic animals and supernatural spirits. Human civilization is divided into four pre-industrialized nations: the Water Tribes, the Earth Kingdom, the Fire Nation, and the Air Nomads. Within each nation, there is an order of men and women called "Benders" who have an inborn ability of learning to manipulate their native element. Bending is a powerful artform, combining martial arts and elemental mystics. The bending arts are waterbending, earthbending, firebending and airbending.

In each generation, one Bender is capable of bending all four elements; this is the Avatar, the Spirit of the Planet manifested in the form of man or woman. When an Avatar dies, the Avatar Spirit reincarnates into an unborn baby of a mother native to the next nation in the Avatar Cycle. Starting with the mastery of his native element, the Avatar learns to bend all four elements in the order of the cycle, which parallels the seasons: winter for water, spring for earth, summer for fire and fall for air. Throughout the ages, countless incarnations of the Avatar have served to keep the four nations in balance and harmony.

Set in a fantastic, Asian-influenced world of martial arts and elemental magic, Avatar: The Last Airbender follows the adventures of Aang, the successor to a long line of Avatars, and his friends Katara, Sokka and later Toph, and their two animal companions Appa and Momo in their quest to save the world from the merciless Fire Nation, while avoiding capture from pursuers including Prince Zuko and other hunters from the Fire Nation. Source (Wikipedia)

The show is epic in scope, I recommend that everyone watch it. 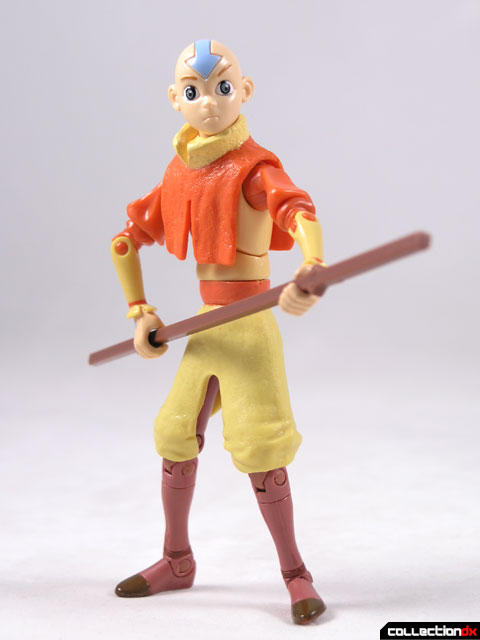 Fisher Price, a division of Mattel, got the license to produce Avatar figures. They come in various shapes and sizes, but this figure is part of the basic line. I wonder why Fisher Price got the line, as Avatar is obviously aimed at older kids. I suppose it doesn’t matter, as they did a really great job with the figure. 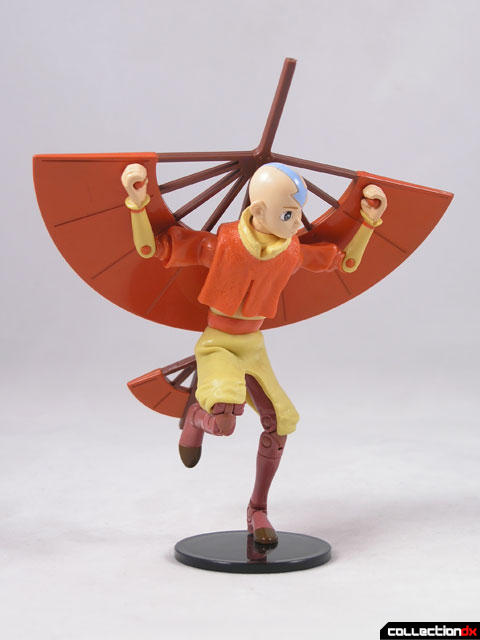 Aang stands 6” tall and comes with his staff, Glider (his staff transforms into this glider) and Momo, a flying Lemur. Aang can grip the staff in either hand, and can grab the glider via 2 pegs. The Momo figure is non-articulated. 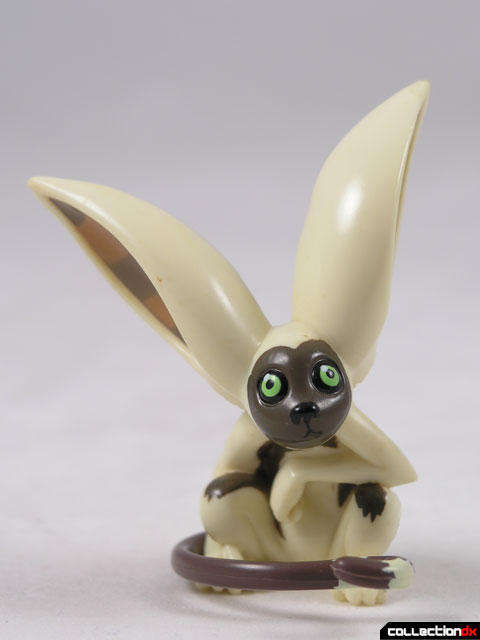 Aang has a phenomenal amount of articulation.  Included in the over 18 points of articulation are a chest joint and double jointed knees. Each joint is sturdy and allows Aang to achieve a fantastic variety of poses. 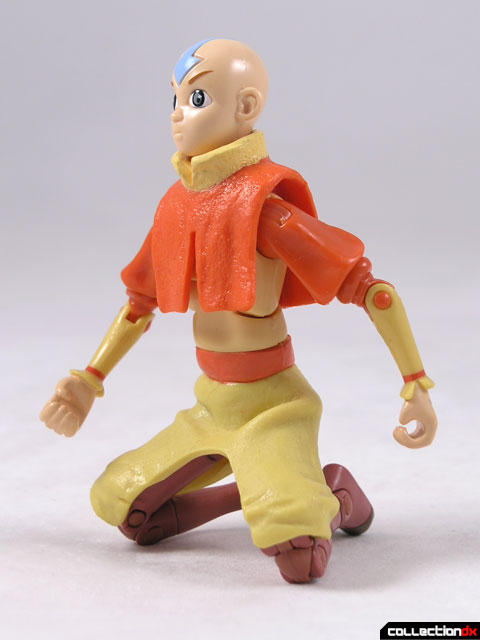 The figure is constructed of high quality plastic with painted on details. Parts of Aangs’ outfit are actually soft rubber; to allow for extreme poses while maintaining the look of the character. It’s a really great idea, but I wonder how this rubber will fare years down the road. 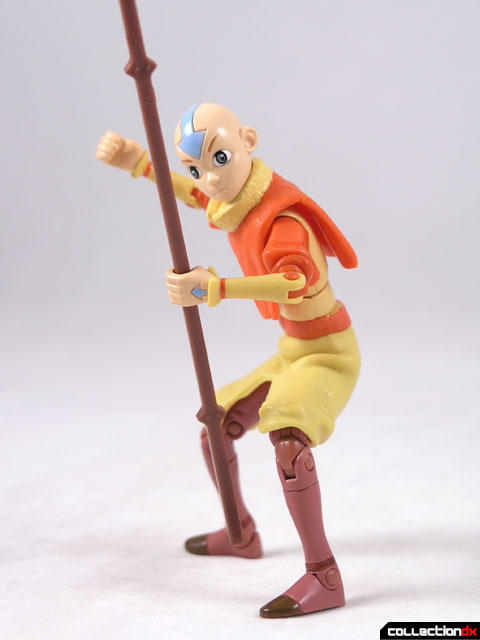 Airbending Aang is a really great action figure, and a tribute to the greatness of the show. The toy does have a few small faults though. Firstly, while the head sculpt does look like Aang, it just feels wrong somehow. In the show, Aang is always smiling or laughing. He has a very animated face that shows extreme emotion. I find it odd that Fisher Price chose such a neutral expression for this character. 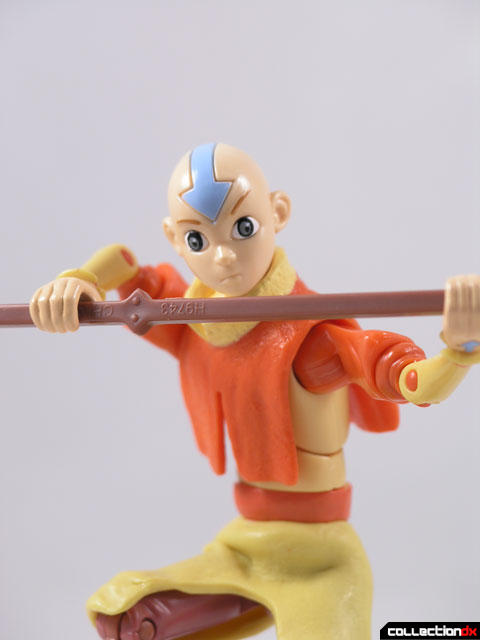 Secondly, Aang, could have benefited from some wrist joints. With all the other points or articulation, it’s an odd omission. 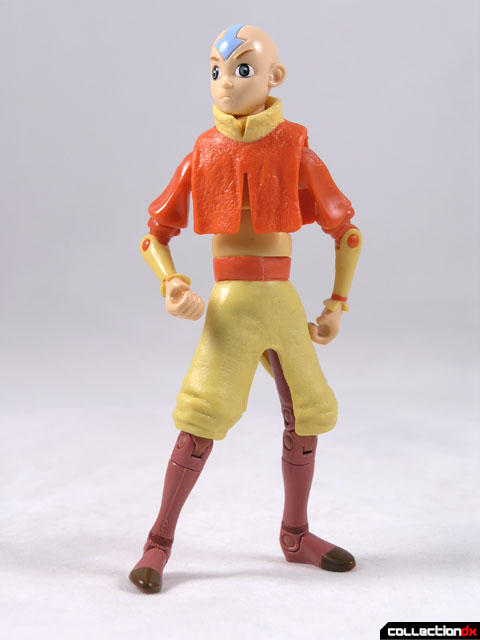 These things don’t really detract from this great toy though, and I recommend that any fan of the show pick them up.

*Aang figure does not include the stand.