So... we meet again... Hi guys, Wallas here. Sorry for not submitting anything in a while, but I didn't have time to post any Transformers-related stuff (I barely kept up with the gallery schedule on my own site) and as or Microman reviews, I was waiting until I got my hands on the whole Biomachine subgroup. And I actually did complete it few days agoso it's time to review... another toy I got on that occasion :P Acromuzan is part of Microman 2006 line, AcroyearXADO that was a counterpart for Micro Assassin Force. Basically, Acroyear are the evil cyborgs that always mess with Micromen. I bought him along with Biomachine Godoh and Trinity from eBay because in total it would have cost me only $9 more. And guess what? He was well worth it :) 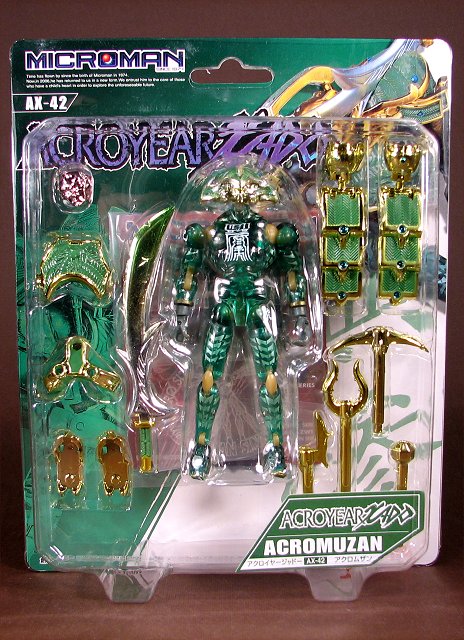 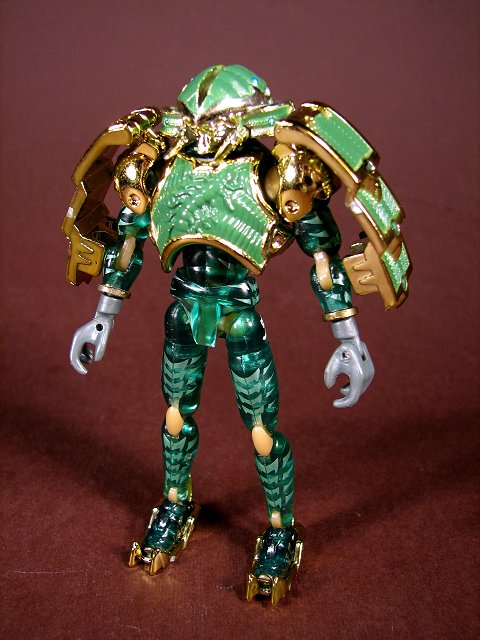 Let's start with the box. It's a typical slide-out blister card. Simple, stylish, done mostly in green and white, with several layers of graphic showing the character on the card. It's one of those cool cardboards that you can actually use as a display background for the figure. About the tray- it's nicely done, with all dedicated weapons and parts surrounding the toy, whereas standard Microman parts (extra hands and display stand) are tapeglued to the card behind the figure. The back, as always, is a guide to the toy and it's features. It seems Takara thought it's more than enough, as no manual was included honestly, I can hardly blame them, it's not a super-multi-mode transforming toy like Biomachines that you need further instructions to handle it properly). 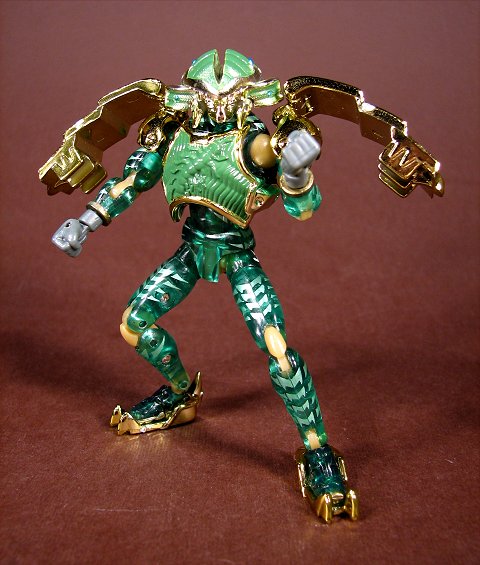 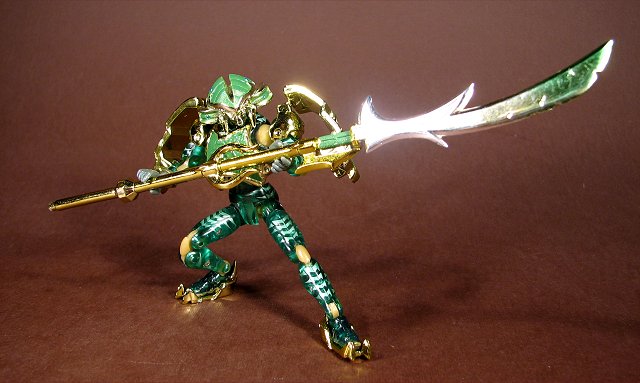 Now let's face Acromuzan in his Naked Style mode. This is a standard '06 Micro Action Body, only with a bulk-up modification that's used very rare in the line. Anyway, the toy is made of transparent green plastic with golden joints. Combined with white touches and light-green tattoos all over his body, Acromuzan could be a forest spirit incarnation... which is pretty close to the truth... we'll discuss this feature further on. Oh, and there's one thing that makes me laugh here. To cite Jeff Dunham's Achmed..."- So, are you a Muslim? - I don't think so. Look at my butt, it says ". Now look at Muzan's back and spot the simillarity :P 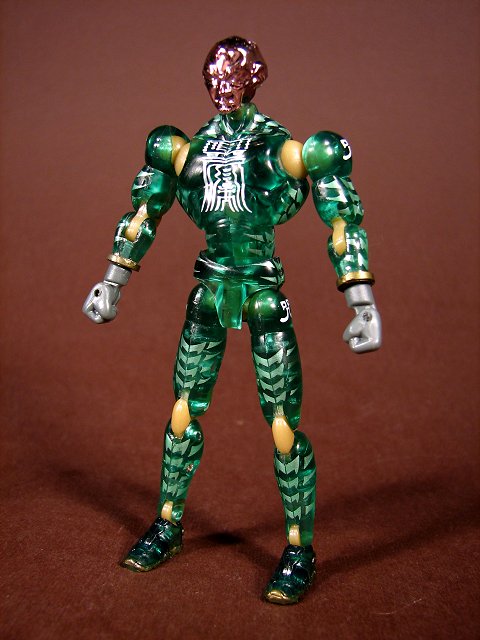 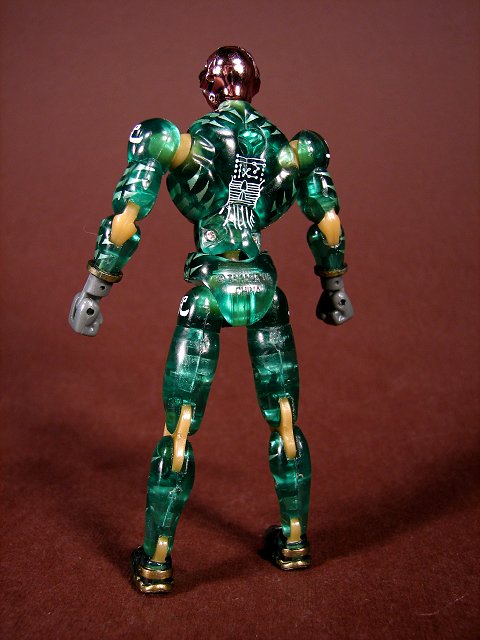 As usual in this series, Acromuzan head is completely chromed (silver, shiny, reflecting everything around) and looks like he's a bald, monk-like man with a small beard. 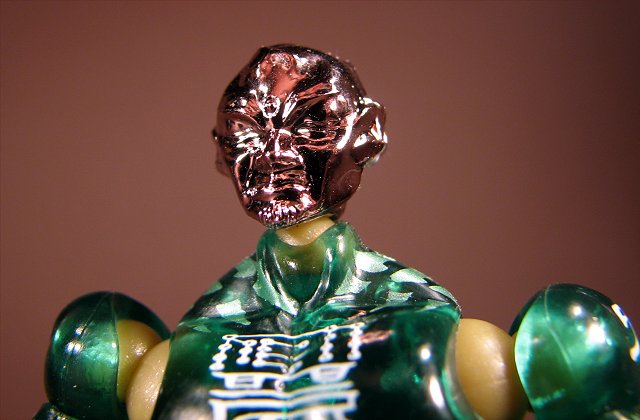 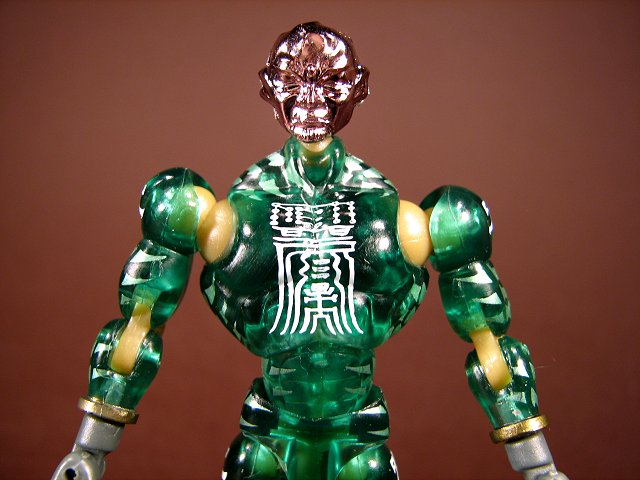 So, we come to basics. First, the comparison. Just as all other toys form this series, Acromuzan is smaller than your typical Revoltech (not to mention your typical Transformers Animated Bumblebee). Fortunately, he wins against an AA battery... And, as mentioned before, he comes with 5 extra pairs of ABS-made hands, that (unlike most Kaiyodo's toys) feature an additional joint. And there's that basic Microman stand, too. 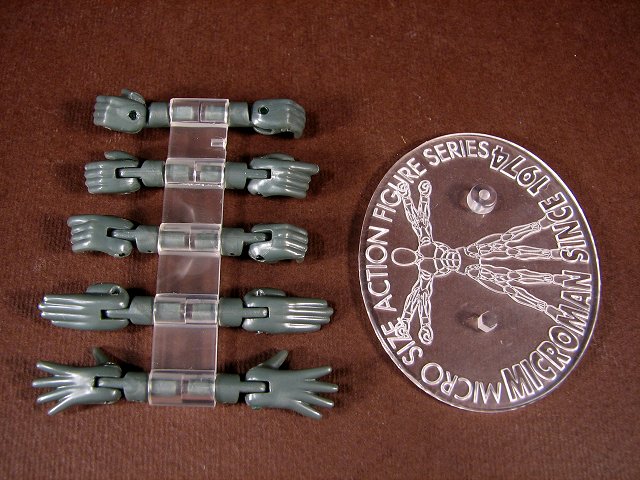 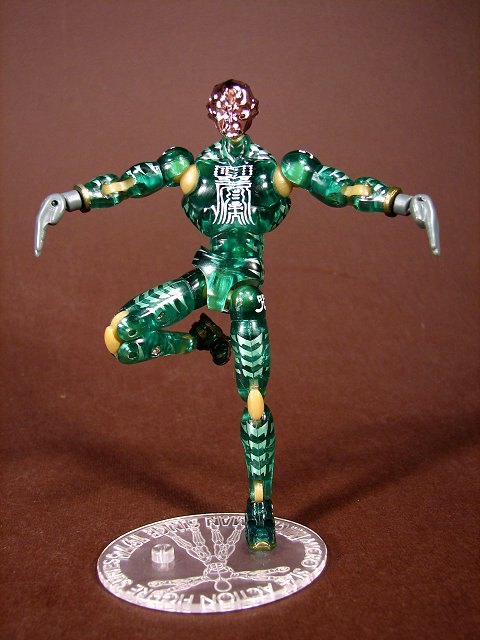 Let the great action pose show begin! Seriously, although Revoltechs have more points of articulation, I suppose it would be quite difficult for them to beat the poseability of toys like Muzan. Just imagine what could he do with a better stand...oh, did I mentioned, that compared to 2004 Micromen, Acromuzan and his buddies have additional toe articulation? 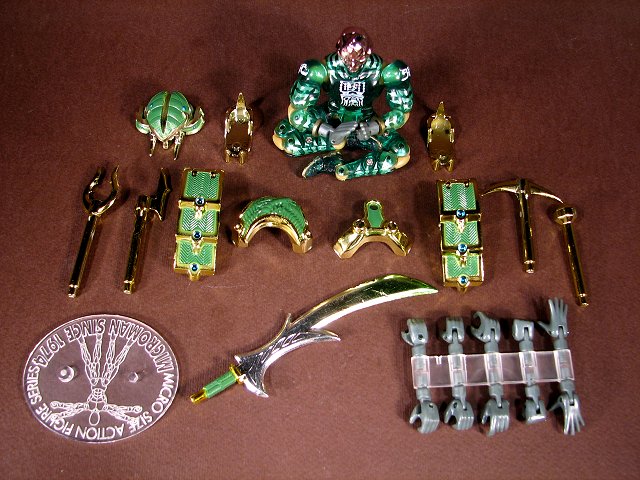 Presenting everything you get inclusive apart from the infomercial. So, what do we have here... 1 Acromuzan 1 display stand 2 pieces of torso armour 1 interchangable head/ battle helmet 6 pairs of interchangeble hands 2 pieces of shoulder armour 2 pieces of foot armour 4 short melee weapons 1 long sword That's a great amount of parts and believe me, they come together in few different combinations that I'll show later on. 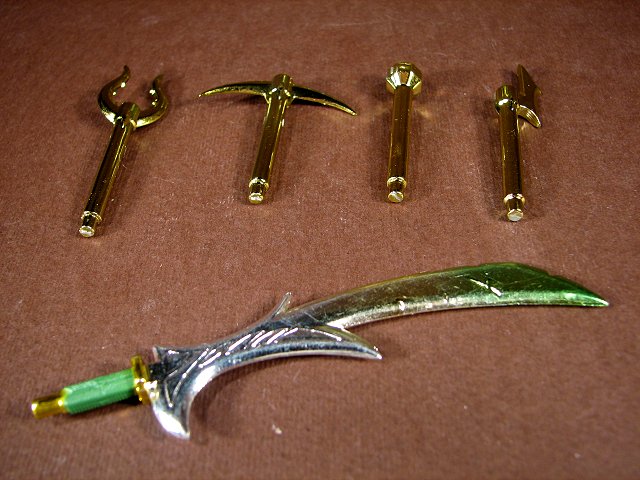 Now, after attaching most of these things to the main body, we get a second toy in form of a samurai warrior with strong bug-like theme. I mean, there's a caterpillar crawling across the chest piece, most of the armour has small blue gems that look like bug eyes, and then those tattoos and the color of his skin, not to mention his awesome helmet... you get the idea. 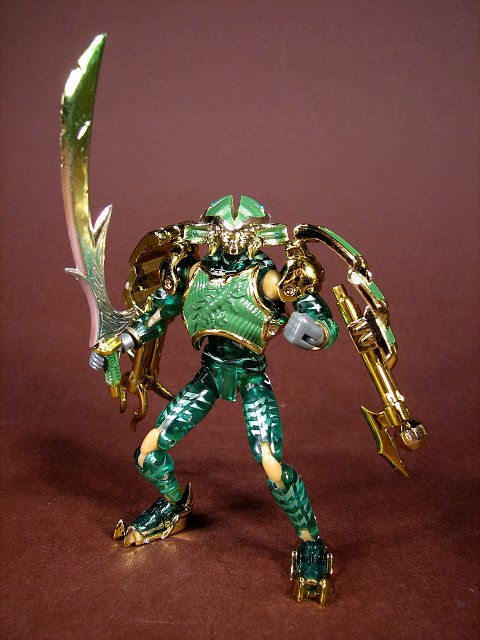 You give Acromuzan some armour and he still is incredibly poseable... wow. He loses his display stand option , though. Not a problem, actually, he's quite stable on his own. Now, what all boys (and maybe some girls, too) like- weapons! As said before, Acromuzan is equipped with 4 small melee weapons and a sword. I'll describe them one after another. 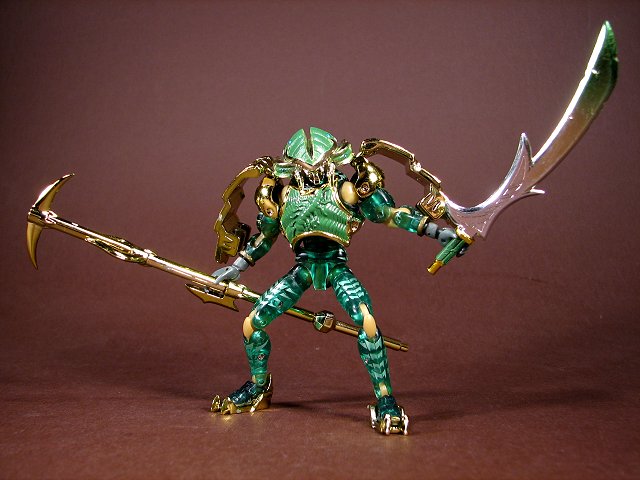 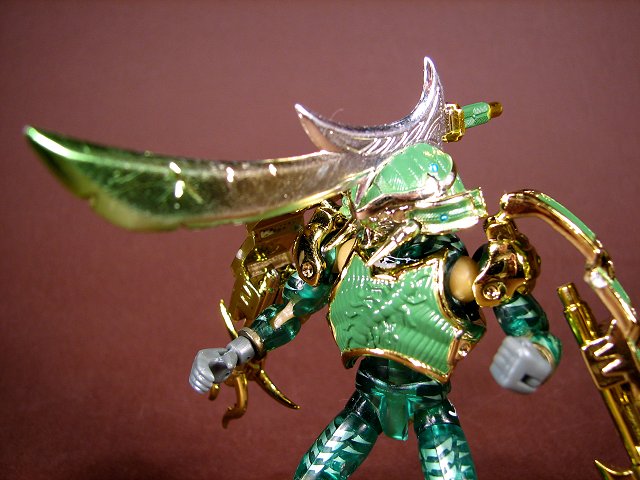 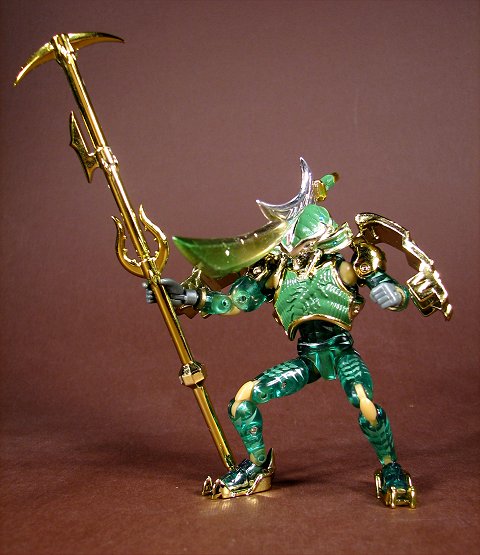 The cool part about the gold weapons is their ability to combine. Yo can use them as single tools, dual/triple weapons, or you can just pull them together into one big staff, it's really up to you, just know, that there are more than 20 possibilities of connecting these things. 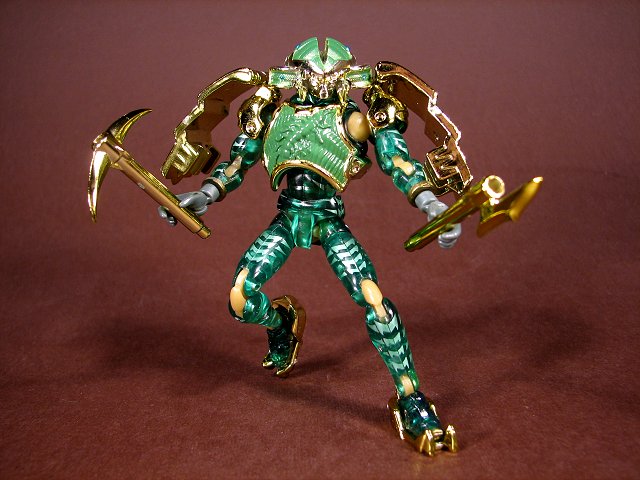 Even cooler, the inner sides of the shoulder armour (double-jointed on the shoulders) have special holders to store the melee weapons when not used. This can be used either as a decoration (when pulled inward to the maximum), as another combat configuration (when pulled out), especially effective when the user makes his way through a crowd, slicing and hitting everything on his sides. 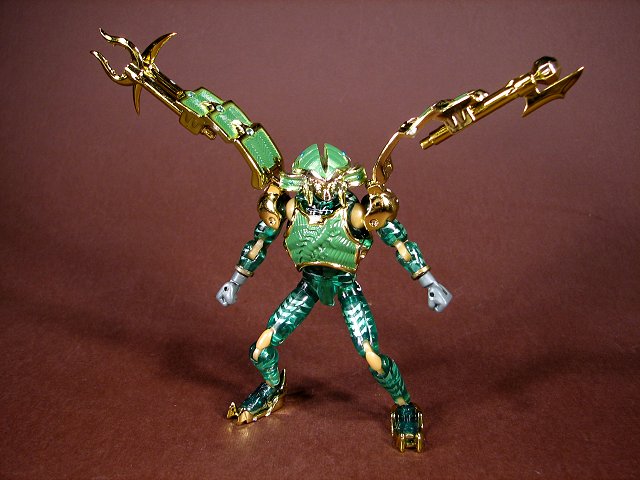 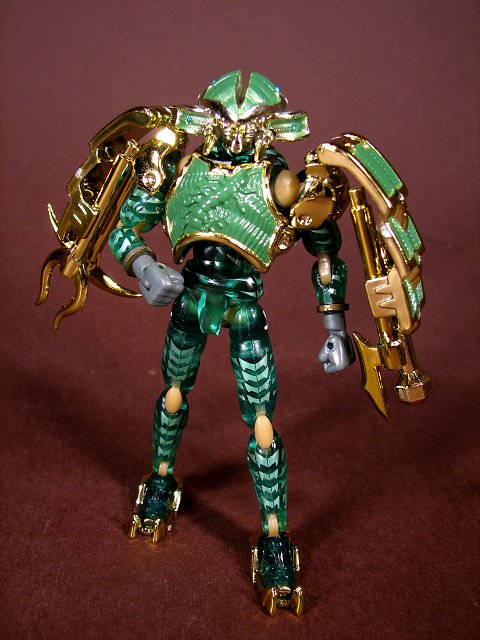 And we just can't forget about the sword, the most impressive piece in this set. It's chromed silver and fades into green near the top. It's also quite realistic, even with this unusual shape, as it sports several cracks and even some artistic carvings. And you can really tell that this is a collector-oriented toy. How? Simple. It's sharp. I mean, you won't get hurt by the edges, but the tips are a different story. I almost cut myself when played with this baby, and this goes for the rest of Acromuzan's weapons as well (this can be a royal pain when you try to disconnect the staff with sweaty hands, I assure you). Other than that, it's just a normal toy sword with all of its functions. Well, not exactly, this sword can also be mounted atop Acromuzan's helmet, which is pretty weird configuration that I never use.

But there is one final configuration, that basically kicks butt- you combine all five weapons into one big halberd (I detached the last section to get a better setting of the toy in the picture). Pure awesomeness, even as I'm writing this review Acromuzan stands right beside me in this pose. Ok, so it's time for some afterthoughts. Let's face it. Acromuzan is a fantastic toy with an enormous play / display value as well as a very reasonable price (about 7-8 dollars) He encouraged me to collect other Microman toys and I hope he will do the same for other people like me. 10/10 :)

Crap, that thing's cool! Man, Wallas, you're gonna inspire me to review the few Microman toys I have!

Keep it up! Microman's highly under-rated. Having more Micro coverage here would be cool!

Hey, I still intend to do 4 more Biomachine reviews, so don't worry. Maybe I'll also do a MP Starscream review, I'm doing his gallery for my site soon anyway :P

I think when you put the sword on his head,it's meant to resemble a beetle head,like Megalon or that one guy from Transformers:Energon.
It's a cool look in my opinion,of course I'm biased towards anything that looks like Megalon.

Wow, this thing looks awesome. Definitely one of the cooler Microman toys I've seen (though I admit I haven't seen many, and own none).

This would make an awesome start, but, I can't find any being sold in the US. Damn!

Dude, if you scroll up a little bit, there's an eBay link right there for one...starting at a penny! :P

Thanks for the heads-up, Sanjeev.

However, when looking around on eBay, I already saw that one. It is being sold from Taiwan and the seller only accepts PayPal. Our credit cards are so burnt out as of late that we can only pay for internet purchases with money orders and checks, and don't even really use PayPal anymore.

There are a couple of people who might be willing to do me a favor, though, so I'll try...

THAT is the most beautiful Microman figure I've seen. I wish I can still get that thing.

I really don't follow the Microman line at all. Do they still make vehicles and playsets these days, or is it just the figures? Anyway, cool figure and great review.

no since Takara and Tomy merged Microman have been on the back burner with only a handful coming out all of them linked so some other product. the only Microman toys that come close to the old style is the Wrecker Sigma stuff but even then that's liked to a live action show and a few are just repaints with new heads

Yeah, I mean, don't get me wrong--I'd love to see a complete Gatchaman set of Microman figs...and maybe even vehicles in the DMZ style...

But the original stuff was just amazing! So imaginative and mind-blowing!

Got it, what a cool figure! Thank you Wallas for opening to my eyes to such a great toy, and Sanjeev for turning me back towards eBay when I was in doubt :)