This may have been FunRise Toys first series of action figures. To coincide with the release of the Charlie and the Chocolate Factory movie, two series of action figures a playset, and some role-play toys were planned for early Fall of 2005. The movie and toys generated a lot of fan interest, being the remake of the movie “Willy Wonka & the Chocolate Factory” (1971), which starred Gene Wilder. Fans were particularly interested since this was a Tim Burton-directed movie, and starred the popular, and quirky Johnny Depp, who is currently the lead in the most popular film of the year, “Pirates of the Caribbean”. So it was a sort of convergence of three cult fan groups. 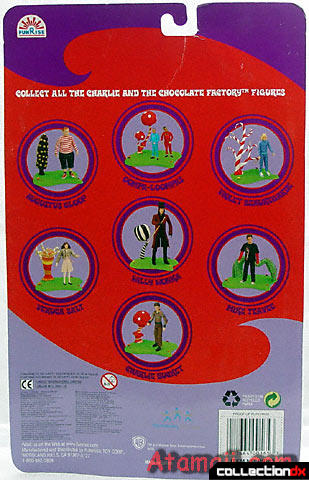 Although the movie was moderately popular, and the toys sold fairly well in specialty, both perhaps did not live up to expectation of mass-market retailers. FunRise stopped production on the second series of figures, and the role-play toys. This anguished many fans, since the second series contained the Oompa-Loompa character—who arguably stole every scene he had in the movie. Some of the second series was released, I know because I found one in a sale bin at ToyrRUs. There may have been only 2,000-4,000 of those produced (assuming one case pack of 12 for every TRU in the US), making them of interest to collectors. Here is a breakdown of the characters by series:

Another note on production. The initial display prototype of Willy Wonka shows the character smiling. Photos of this prototype were released in FunRise printed catalogs, and on the card backs of the finished products (see the photo). 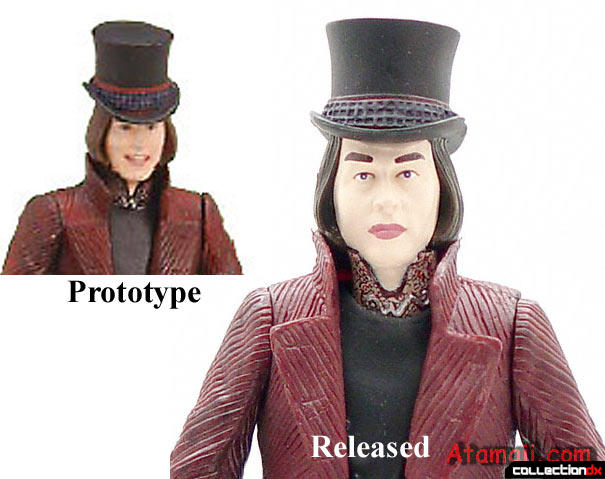 However, in final release, the character was changed, no longer smiling. Does it look more or less like Johnny Depp in the movie? I don’t know. In profile I will say it does look close to him. I suppose this is a problem when you are working with a high-profile “property” like Depp. 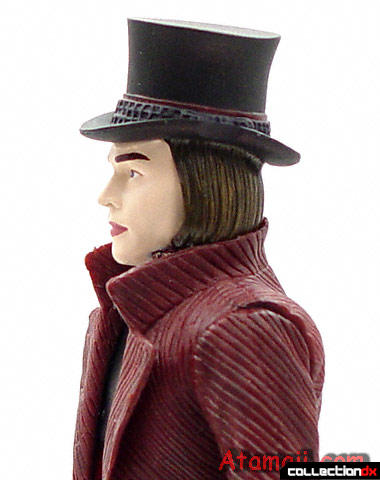 A note for collectors. Because of some production problems, many of the card backs were delivered bent, and/or the clamshell delaminated from the card. If you are making a purchase I suggest you ask the merchant first about the condition of the packaging.

About the Willy Wonka Figure. 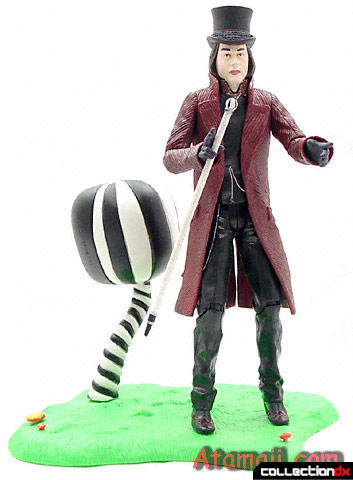 Willy stands 6 ½ inches tall with his top hat. He has some limited articulation. He comes with a base, although he will stand up on his own. His coat is flexible. You can remove his walking stick.

The base for the Willy Wonka figure has a few mushrooms (don’t try to eat them!) and a large, trippy mushroom-like prop. On the bases of some of the other characters, it is suggested that the mushroom-like props have designs that look like the Jack character from Tim Burton’s “Nightmare Before Christmas”.