Screaming out of the artificial depths of the abyss of Sentai Mountain comes the Sonic Phantom- a completely original design created by the robots sometime between the rebellion and the current war. The first thing Exo-Force noticed about it was not only its blazing speed, but its power plants- four nuclear-powered turbofan engines, which puts it way above the level of even their own heavy Thunder Fury Battle Machine. With such overwhelming power, the robot’s assault vehicle moves so fast as to need two of those engines just for steering and stability. It also means that it can accommodate incredible weapons. Four large pulsed lasers are mounted on turrets below the steering engines and can swivel side-to-side for strafing runs on human positions. A fifth, more concentrated laser cannon is mounted between the forward driving engines, as is a large missile launcher. A possible weakness is suspected to be thin armor, which was removed to decrease mass; although no direct hits have ever been made yet. The only robot powerful (and/or insane) enough to drive the Sonic Phantom is a specially fitted Devastator which aggressively pursues even wounded targets until they are completely destroyed. To coordinate its heavy hit-and-run tactics with their plans, the vehicle is fit with an advanced communications system, which also delivers reconnaissance information from the Sonic Phantom’s sensors. Exo-Force technology expert and Battle Machine pilot Ryo has made it his personal mission to find some sort of counter to this screaming mechanical demon. 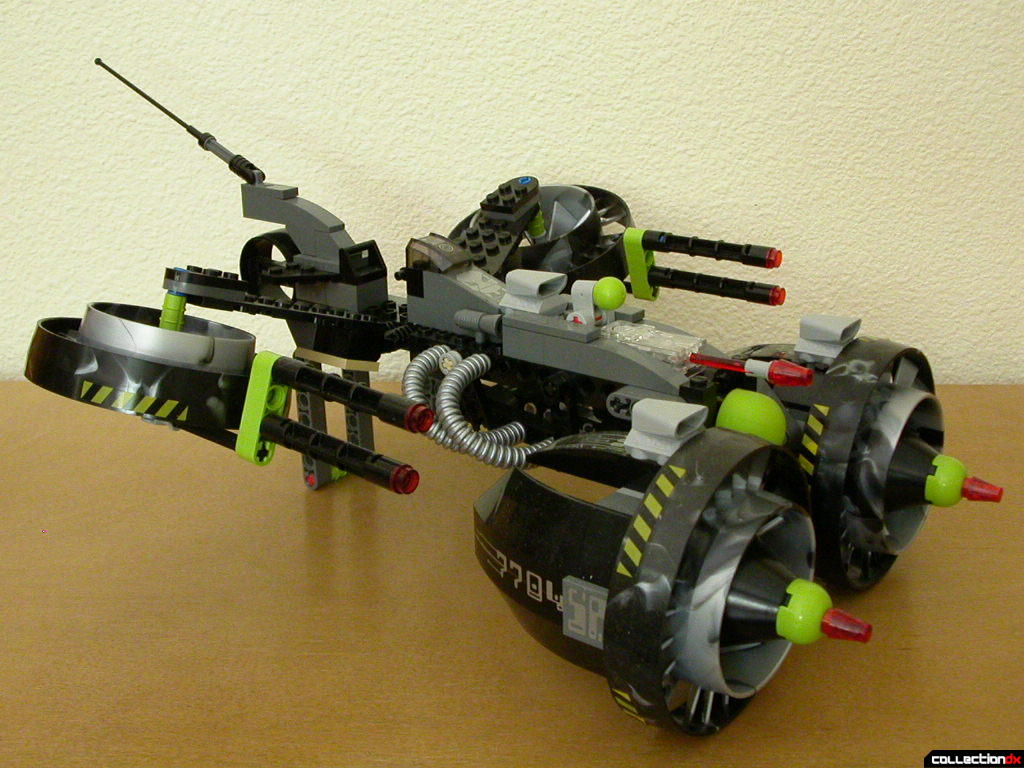 The Sonic Phantom (back) is not considered a Battle Machine even though it was designed exclusively for combat. It features no limbs, though it has a set of snap joints for the support wings in back. It has the appearance of a flying, stripped-down muscle car with exposed air intakes & hoses, two huge engine pods on the front, and two more on the back on thin wings. The cannon turrets are actually attached to the bottom of the same shaft that holds the other two engines from the wings. All four turbofans can be turned manually, and has turbine blades molded into each. There is a much smaller secondary turbofan mounted beneath the comm antenna that can swivel around as well. Its primary special feature is the missile launcher mounted between the two front engines- a launcher first seen on the EXO-Toa (#8557) set from the 2002 LEGO “Bionicle” line-up. The missile - which has a soft neon green rubber head- shoots about 2½ft when the trigger underneath is pulled, and the set is on a flat surface. (Since LEGO’s rubber bands are notorious for being placed in areas where they are stretched hard and then wear out quickly, I usually leave mine off so that it doesn’t accidentally fire.) The firing mechanism for the missile also has another function... 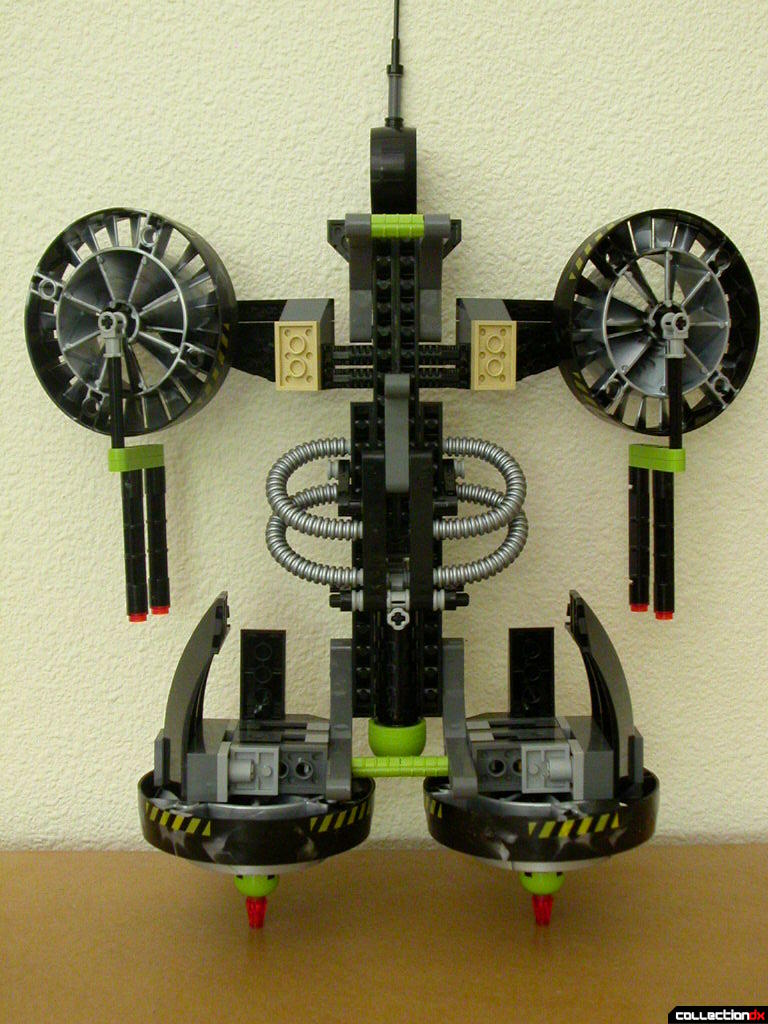 The Sonic Phantom is one of five “Exo-Force” sets that use the newly-developed Lego light brick- a transparent 2 x 4 brick that has a small red light emitting diode (LED), a small, enclosed, self-contained battery, and a small trigger blended into the top. While the light brick can be snapped onto things, it has no studs of its own so nothing can be snapped on top of it or else the trigger couldn’t be accessed. The light brick in the Sonic Phantom set is activated when the trigger underneath the body is squeezed. This shifts a multi-piece assembly around slightly, and a piece is wedged against the light brick’s trigger on top of the toy, activating the brick’s battery & LED. When this happens: 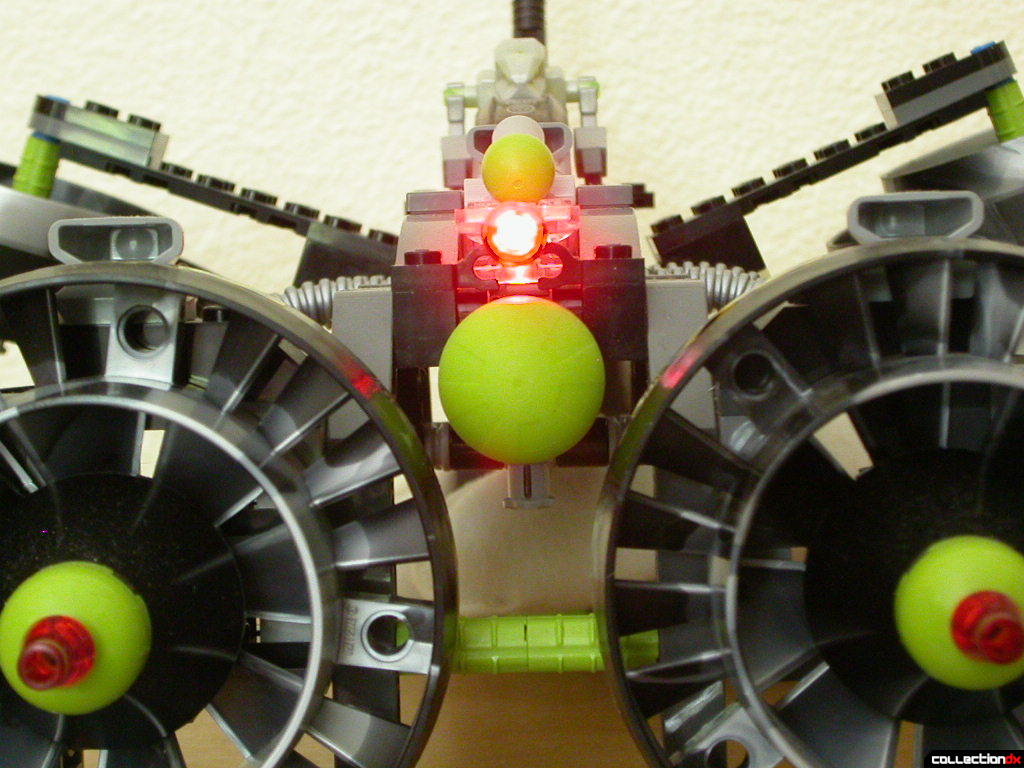 Because of its design, the light brick shifts forward a little as well. I should also note that the shaft is the same type of piece used for the lightsaber blades on many LEGO “Star Wars™” sets since just before “Star Wars: Episode I- The Phantom Menace™” (1999) debut in theaters. 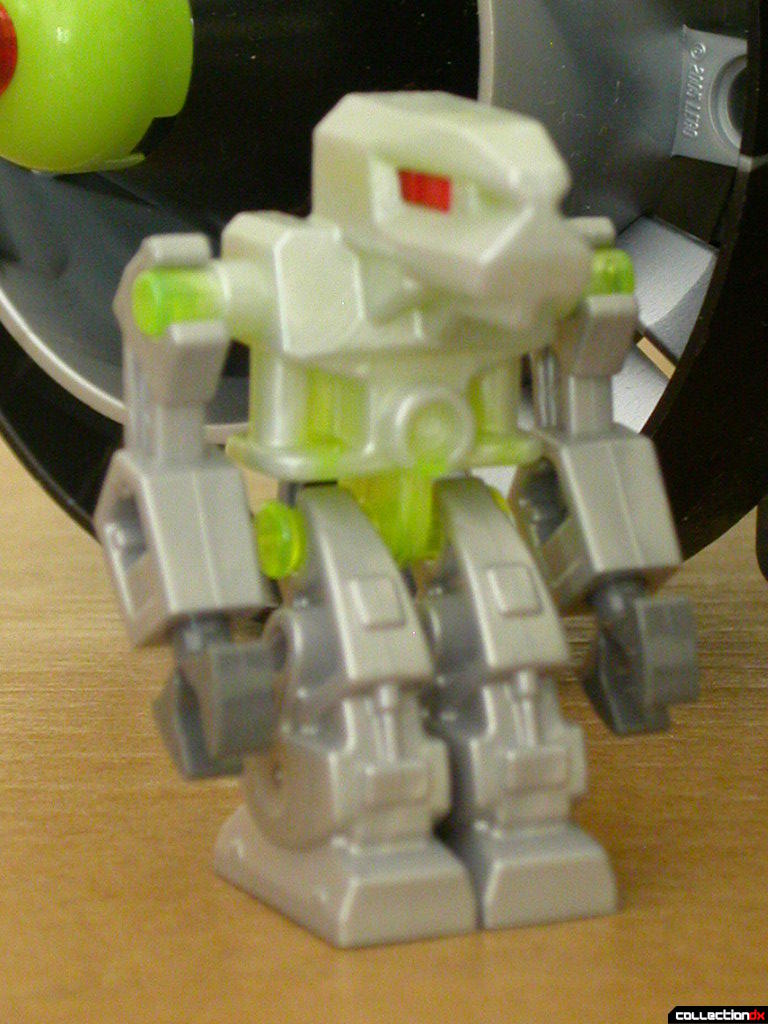 Lego Set #7704 also comes with a new green Devastator robot minifig, which is exactly the same in appearance as the other robots in the line except in color. What separates the different light gray Devastator robots is the alternately-colored plastic in their torso pieces- blue for Set #7702, red for Set #7703, and green for Set #7704. The alternate colors are semi-transparent, and light can shine through them. For the eyes, a red #2 Technic bar is slid in through the back of the head. The hand claws can also rotate at the wrist, and need to be attached 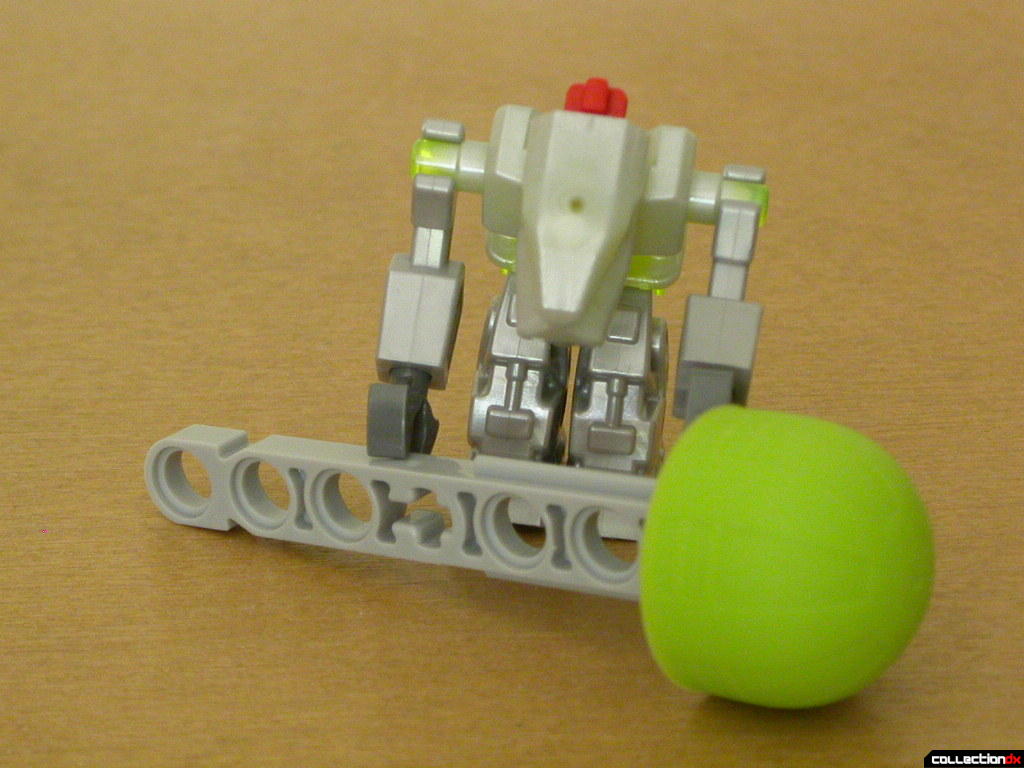 Normally, when a Lego set needs specific details on a part, such as a control panel or flag, the image is printed or painted directly onto specific parts. However, the “Exo-Force” line breaks that mold by using stick-on decals; something that was rarely ever used in the past. There is a small sticker sheet which provides allegiance markings, warning symbols & notices, and names. This serves to allow for a wider range of piece marking without Lego having to create a completely different piece each time, and merges the “Exo-Force” and Japanese toy influence closer together. It does, however, have a small downside- because of the design of the decals, some of them cover places where other Lego pieces can go, which limits how a decal-applied piece can be used or taken apart. There are two conflicts with Set #7704:

In addition to building the standard hovercraft-style vehicle, the official Lego “Exo-Force” website (http://exoforce.lego.com/default.aspx) shows how the same pieces can be rearranged into an alternate Speeder Phantom assault vehicle with two huge wheels, a pair of side laser turrets, and a large missile launcher on top; found in the Online Building section of the site, and pictured on the back of the set’s box. (I haven’t built it myself yet, so I can’t give details on the alternate model.) I need to point out that the decal conflict I mentioned earlier will be a problem when you build the Speeder Phantom, so...

The Sonic Phantom is big and imposing, but only in box art; as I found out after I got it. For such a big and speedy vehicle, it has quite a few weaknesses: 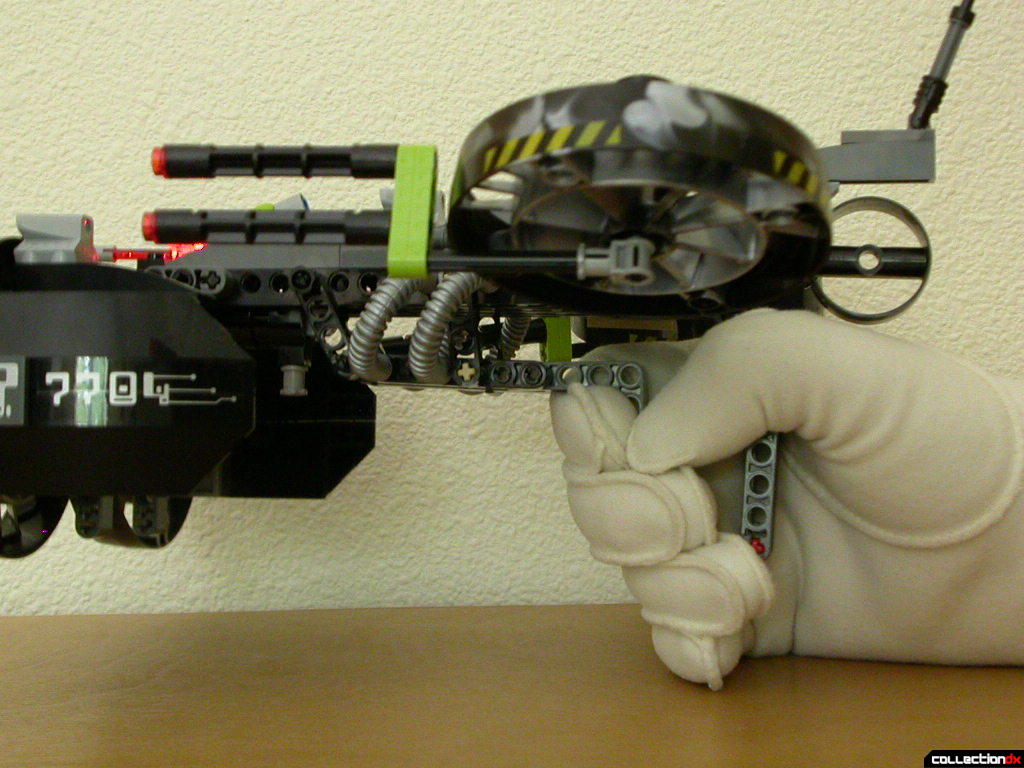 I’ll be honest- if I had known about all this beforehand, I might not have gotten it. It was a real letdown. (I even contacted LEGO via e-mail, and said as much!) But, it looks good on the shelf, so... why not? It isn’t needed for combination with another set (I don’t care one way or the other about that), but the alternate form looks interesting. Yeah, it looks cool, but the way it turned out... I’ll make a cautious recommendation here, and say that if you liked the podracers from “Star Wars Episode I™”, you might get a kick out of it.