Sadly, not every FAF can be a flaming train wreck. Some of them are even more subversive, raising your hopes for the line with their adequacy. The PTX-004 Schutzwald taught me this lesson. Thank you, Schutzwald.

Unlike some of the other suits that appear across multiple Super Robot Wars timelines, the Schutzwald is unique to the Original Generation games. It's one of the suits you get early on, and in the fiction it's basically a test bed for technology used in the R-2, one of the machines in the SRX Project. The name of the suit comes from German, and refers to the mountainside forests planted to protect lower lying villages from avalanches and rockslides. I don't know if that has any relevancy at all.

As an almost grunt mecha none of its attacks are super exciting, but just in case you want to see them, here you go:

Like any other Full Action Figure the Schutzwald comes packaged in the patented Five Layers of Plastic Protection System™. 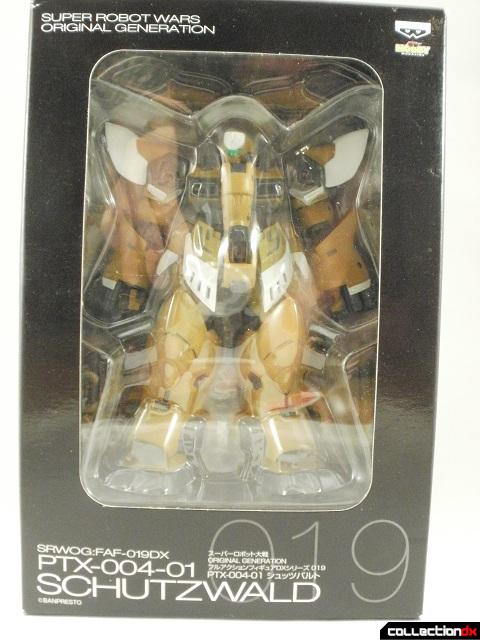 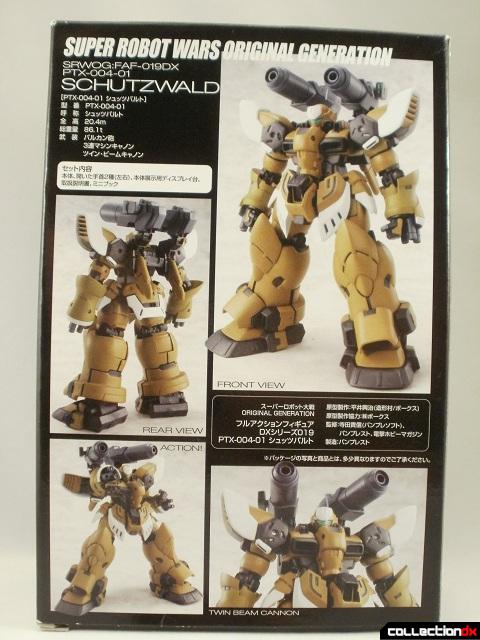 Accessories are pretty scarce, which is to say there really aren't any, aside from two pairs of extra hands and the usual FAF stand. Once out of the box, simply attach the beam cannons to the boosters and the boosters to the body, and the Schutzwald is ready to go. Heavy artillery is what the Schutzwald's designed for, and most of its weaponry is integrated into its body. 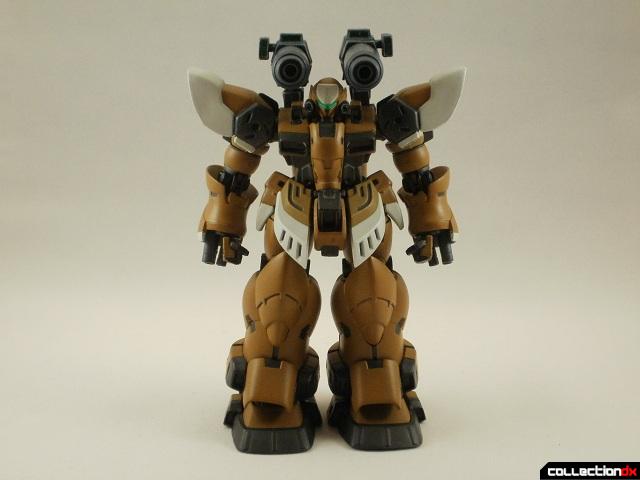 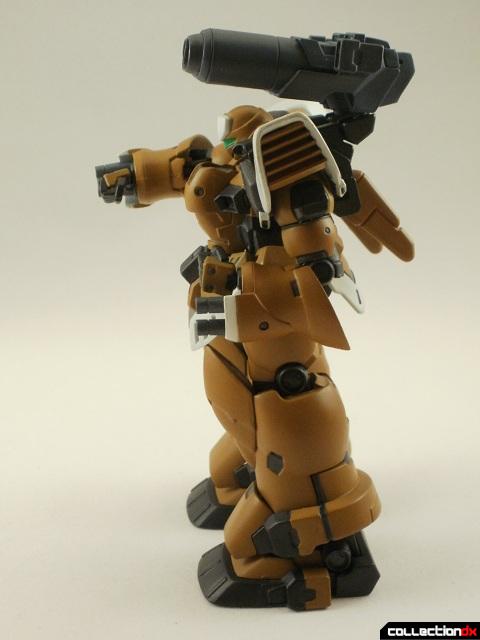 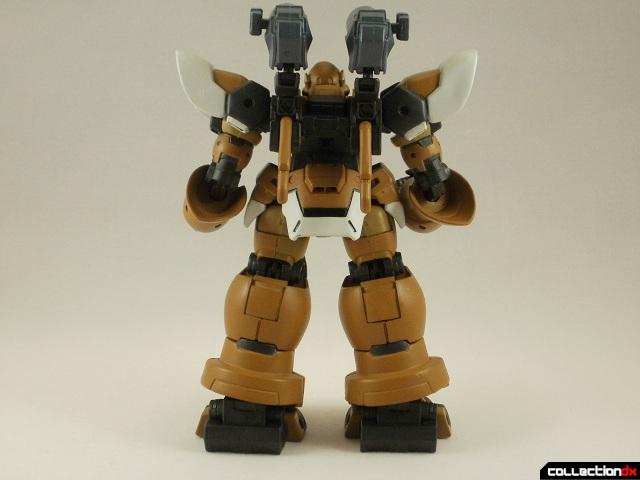 The poseability is not extreme, but completely passable, as the Schutzwald is not a super dynamic mech. For the record, that's double jointed elbows, bicep swivels, a mostly ineffective ball joint for the head, a slight amount of lateral arm movement which I don't think is by design, the expected two clicks worth of knee movement, and a waist post. The forearms can snag and prohibit the full range of movement on the elbows if not aligned properly, and the waist armor has a problem getting caught on the large knee guards, although that's more of an issue of the original design. Aside from that everything functions as it should. 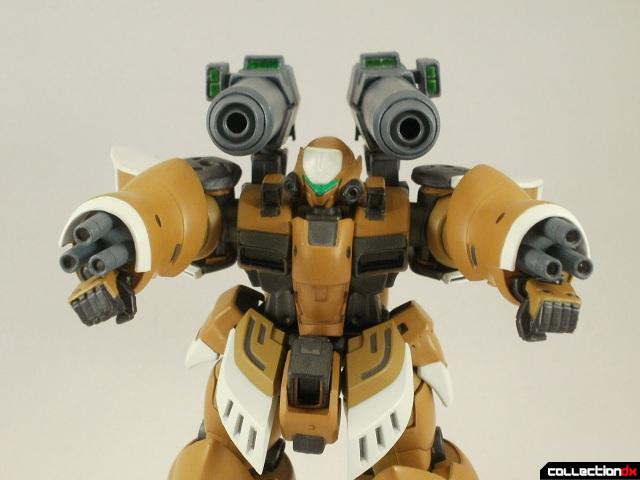 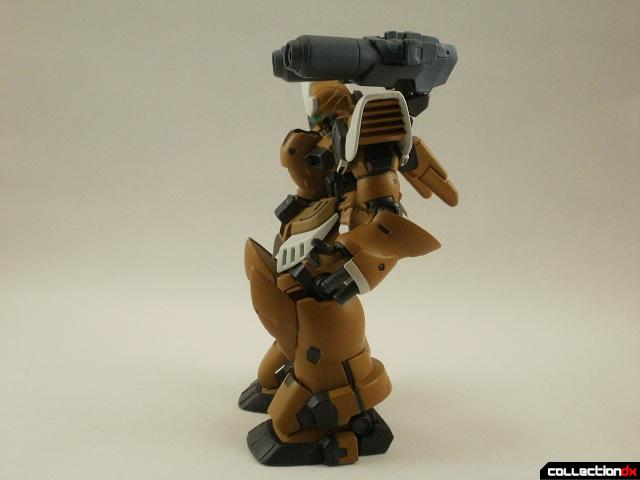 The beam cannons are also on ball joints, and while I'm fairly sure this isn't accurate to the games, it allows side to side movement if you want to pretend that they're smart guns. 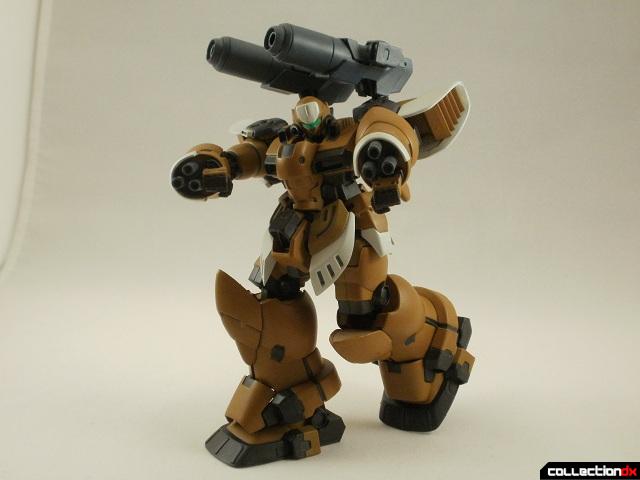 By far my favorite thing about the Schutzwald is that it can stand unassisted. For long periods of time! Thick legs and big flat feet provide a low center of gravity that's uncommon in these toys, and I don't have to worry about it falling over and breaking something. 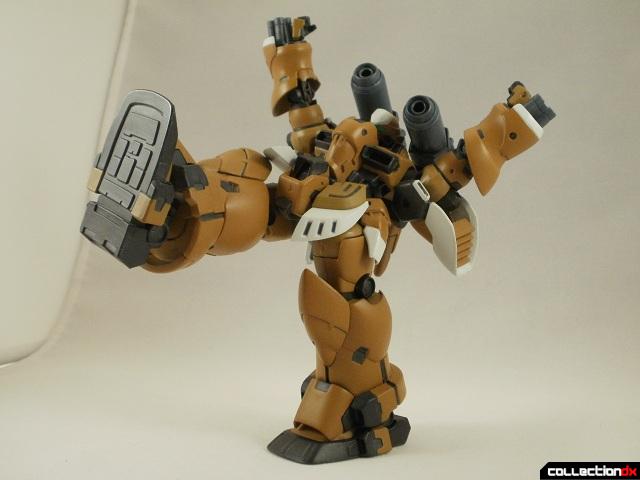 Seriously this is basically a miracle.


It's not a perfect release. The paint still has that 'done in crayon' waxiness to it, and the slippery surface it creates makes the guns, thrusters and waist armor prone to sliding off. The color of the suit is actually off (it's supposed to be more of a yellow), but that's probably not a big deal unless you're a really, really big fan of the Schutzwald. A little stranger is the fact that the thighs are done in two pieces, and the upper piece is unpainted. The colors don't quite match, so it looks a little unfinished. 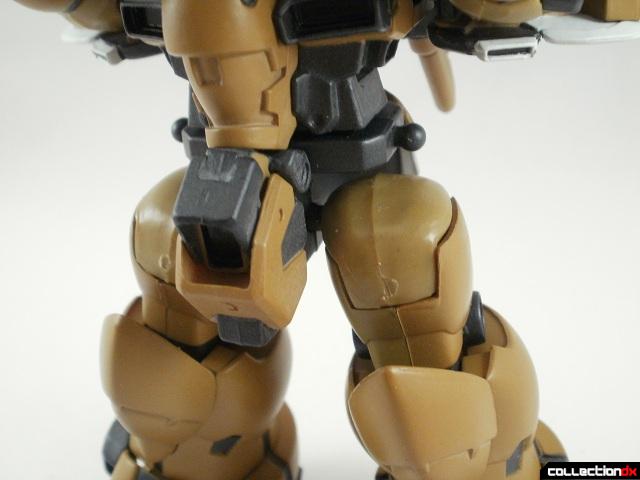 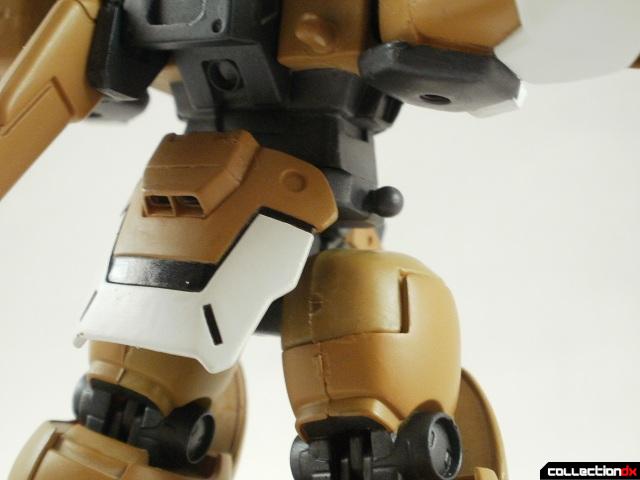 There are some big seam lines and some slightly crooked pieces, but overall this is not only one of the most-problem free FAFs that I have, its competency has grudgingly turned it into one of my favorites. To my knowledge the Schutzwald was only available from Dengeki Hobby; it was never re-released in a "direct from Volks" blue box version. Even so, it doesn't go for crazy prices, and I got this one for around 3,500 yen.

The Schutzwald is one of the most bare bones releases of the line, so as long as I'm at it I might as well mention the FAF manuals, which I've been mostly ignoring for these reviews. For all the other problems, at least the manuals are really nice. They're fairly big, printed on glossy color paper and include the original lineart as well as photographs of the toy. It's...it's all about finding things to be positive about. 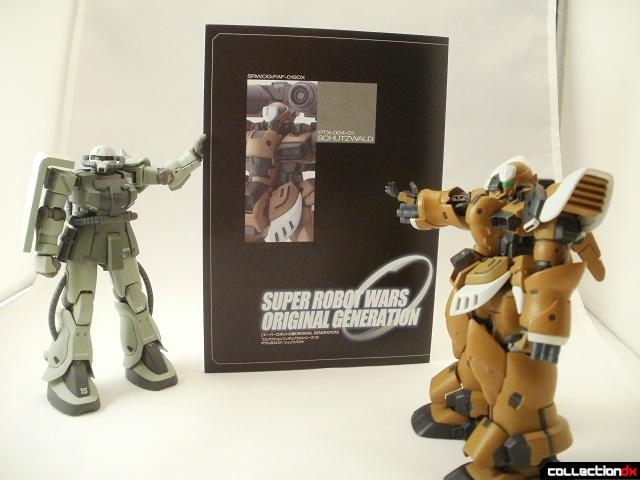 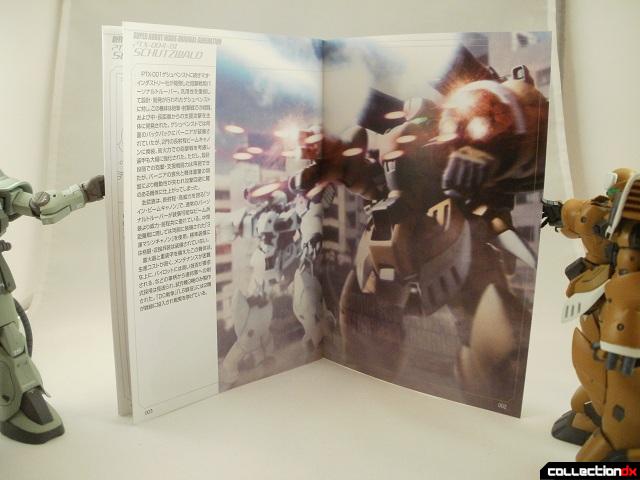 It's interesting that a picture of the white Schutzwald unit 2 appears in the manual, which as far as I know was never released as a FAF. 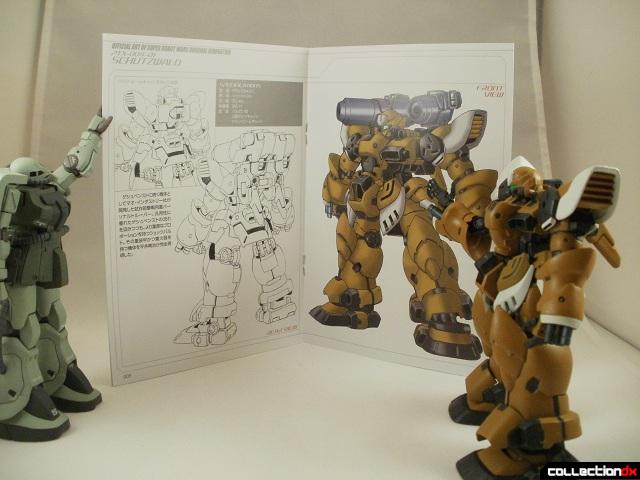 Next up: The Huckebein, for real this time!

3 comments posted
But can it do yoga?

But can it do yoga?

I don't know why...but it reminds me of that one MS (Damnit Brain! Not all Reals are Mobile Suits!) in Alpha Gaiden...can't remember the name, but the pilot was one the elemental lords or at least a friend of Masaki's and had 3 Platypus for her familiars...and she also makes a Fist of the North Star reference with one of her attacks...

I can see that. It does have sort of a Zamjeed thing going on.