I walked into Toys R Us for four straight weeks and was greeted by the store manager. The man has been a Transformers fan from years back but this is the short story:

Him: "Got a shipment in two days ago?.First one gone, again"

For those of you too young to remember, or let alone know what I'm talking about, Optimus Prime has always been that ghost of the toy shelves (except for Armada and Energon at least). I'll never forget the stories my parents gave me.

"I was out until midnight on Christmas Eve, scouring the stores for an Optimus Prime!"

21 years, seven US series and about 10 different incarnations later, Optimus Prime is back yet again and gone from toy shelves. The new Optimus comes rolling out of the new series Transformers: CYBERTRON (aka Galaxy Force for you importers), and onto the review board.

Optimus Prime is a leader in the best sense of the word, taking point on every mission and never sending his team into any situation he wouldn't go himself. Dedicated to the protection of all life and the preservation of freedom for all sentient beings, he serves as a role model for his fellow Autobots. It is through his keen intelligence, even hand, steady nerves and endless compassion that the Autobots continue to frustrate the Decepticons evil plans again and again.

In a desperate race against time, Optimus Prime has been forced to send teams of his best soldiers into unknown parts of the Universe in search of the lost planet keys, ancient artifacts with the power to save Cybertron and the rest of the Universe from the giant black hole formed from the implosion of Unicron.

This new Prime comes in the form of a bulky fire engine, much like his relative from RiD fame. Unlike his predecessor he's packing two cannons instead of a ladder. Also unlike his elder, the cab of the truck can be separated from the trailer and still retain a full vehicle mode.

As I said to members of the Tfans alumni on Halo, a healthy portion of this Prime's transformation seems more related to the Powermaster Optimus Prime. The only difference is the front of the cab. The connecting trailer assembly is locked in by a series of hexagon pegs with clasp inserts. These ports are essentially tough so the bot doesn't come apart in truck mode or "flight mode." These also come in use again for the Prime standard "Super Mode."

This mode is pretty much for toyetics, albeit the flying car has been around since Tracks in the early days of G1. The weight of the two cannons doesn't put any strain on the wings

For a first time in a long time this is one tough looking Prime, even without the super mode. The faceplate is of course not part of this mode and instead this Prime is open faced like his Beast Wars relative (also from his early Energon form). After a long line of Primes that met with the disproval from hardcore fans. This one leaves them with little to complain about. Although its not the front of the cab, the windows from the side of the truck make the front of Prime's chest adding to the more 'Prime' look that most hardcore fans have wanted to see.

Posability in the robot mode is great plain and simple. Not nearly MP Convoy worthy but better than what has existed for a Prime. The hands have hinged fingers (as one piece) to open and grasp the gun. Another toyetics feature that this Prime has is a removable Matrix. Simply open the chest plate and fold down the front cover. The only flaw that exists with this is that the hands are too clumsy to hold something like this.

While a bit back heavy with the cannons folded up, but this makes one of the biggest Super modes I've seen (aside from the Energon Optimus/Omega Supreme combination). The added touch of Prime's close faceplate is just a bit of heroic flare more than a toyetic feature. The Hasbro edition has the Super mode with the cannons coming over the shoulders (with the wings pointed down, as if the sides of the truck are just open out to the sides, not rotated); however the 'proper' form has them under the arms. However way you want them is up to you, there is no limit with this bot.

Sorry, couldn't resist saying that. The fun feature in the Cybertron line of Transformers is now the 'Cyber planet key.' Like Armada's mini-cons, the cyber keys unlock features and weapons. For Optimus there are two key slots: one in the left cannon, and one in the right. The right cannon slot opens two missile launchers and the left cannon slot activates the secondary light and sounds function.

NOTE: The downside to some of the Cybertron editions is the lack of paint to certain areas. More notably, cyber keys such as Optimus' and others like Ransack and Vector Prime are left unpainted. So with a careful brush I did my own paint work for Prime's.

To say the least, this is one of the best Prime's in recent series. His stand alone size makes him worthy of the Prime name. I know a few purists that will die before they like this one. This Prime shows a lot of fun for older collectors and newbies alike. 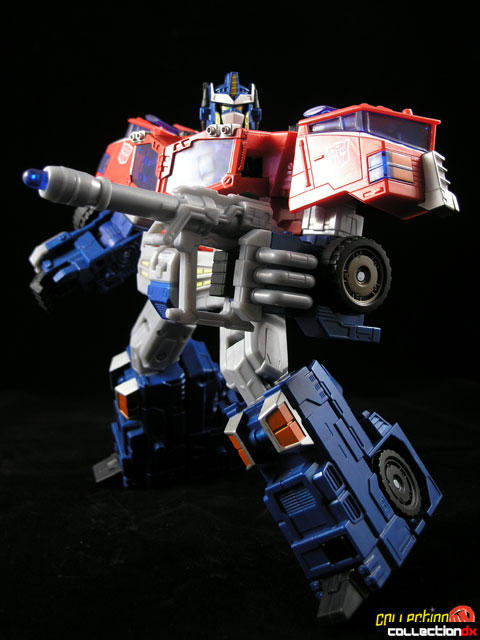 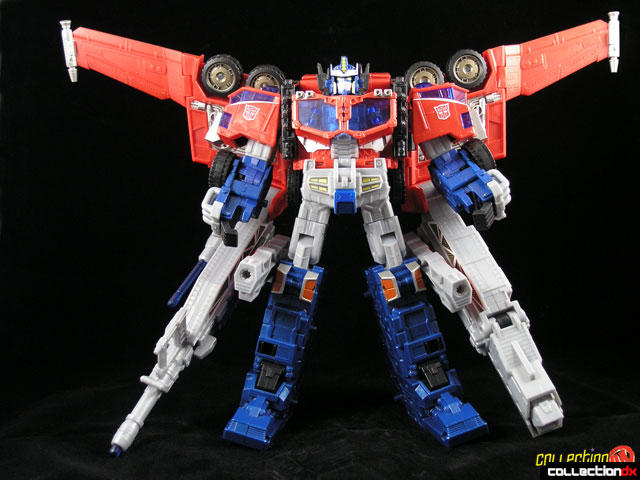 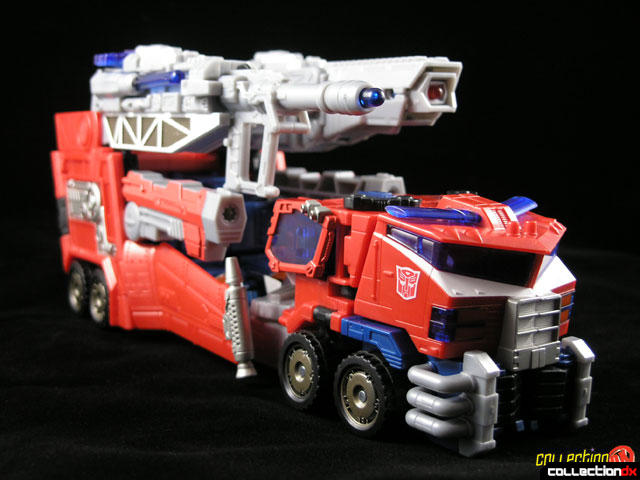 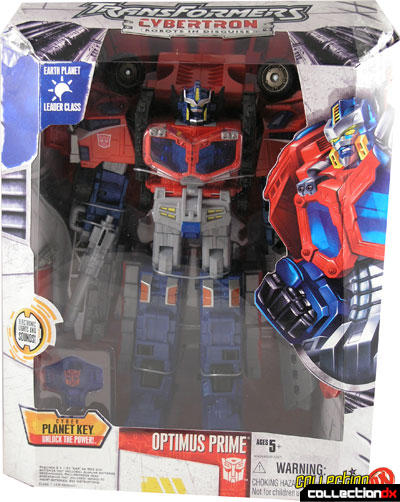 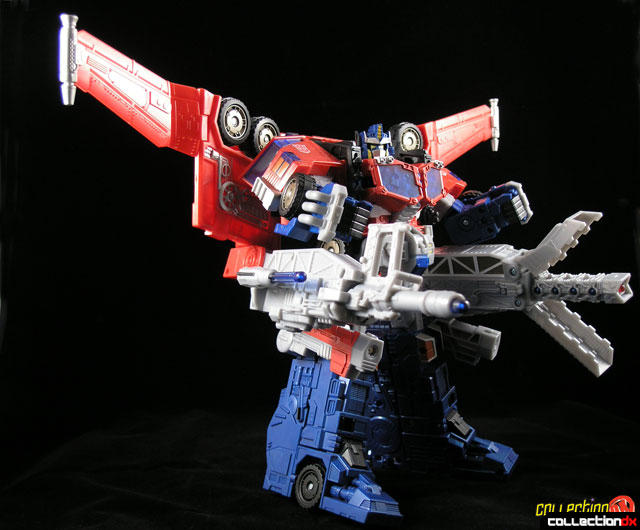 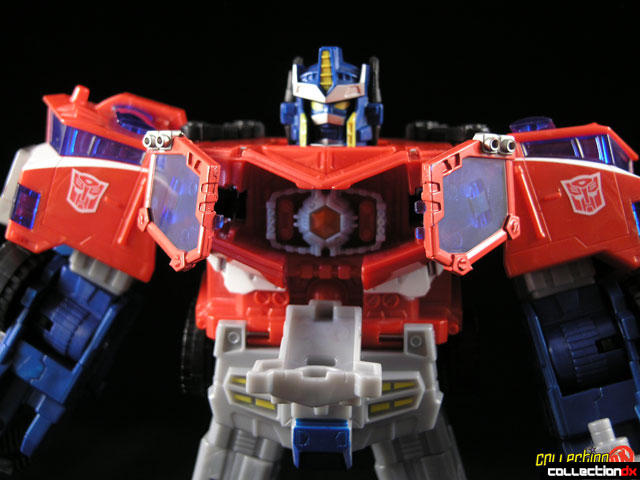 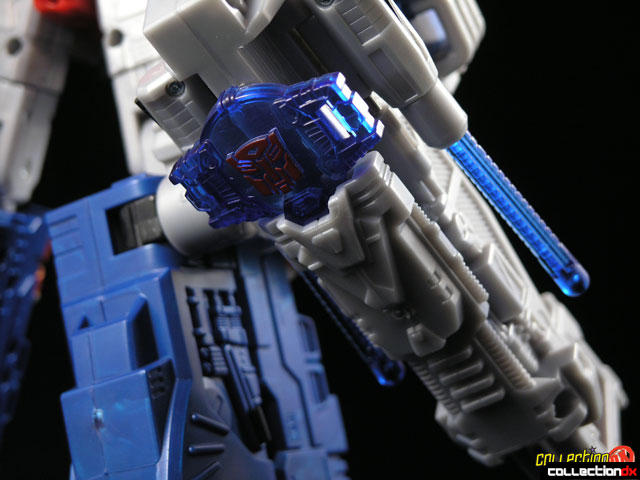 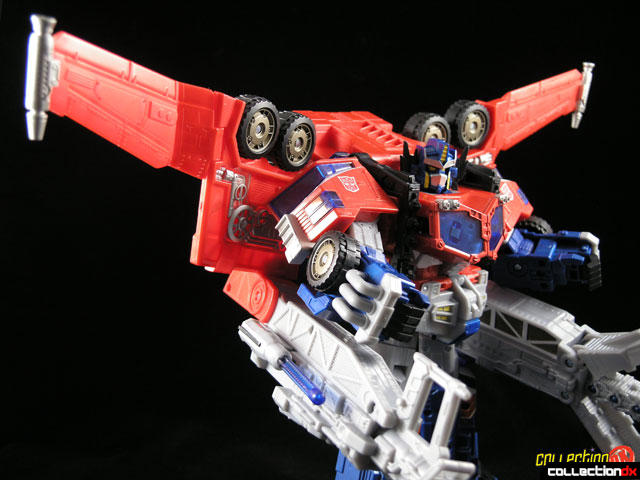 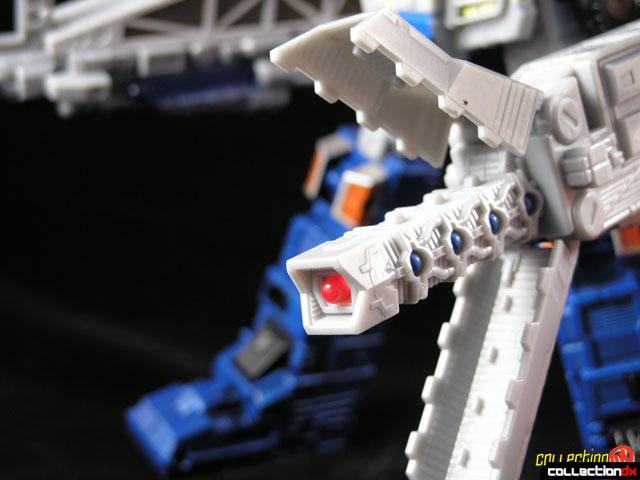 I recently got the 19.99 opimus prime, the one that transforms into a truck. good job on the repainted CYBER KEY!!!!!!...

To think, there used to be a time you could get this for $20!

Mmmmmmmmm, I think even back in the day, a Leader-class figure would set you back $50, not $20.

I would know- I got this figure back then, and still have it to this day.

His black & red repaint was $20 when it appeared at Family Dollar stores years ago during the holiday shopping season.