In 2005, Toei released their annual Super Sentai show that depicted Magic as the main theme. Alongside Kamen Rider Hibiki, this show ran in the Super Hero Time slot of TV Asahi. I’ll cut the introductions and go straight to my review, the Sentai Hero Series Legend Magiranger. This is part 1 and focuses on Legend Magi Red. 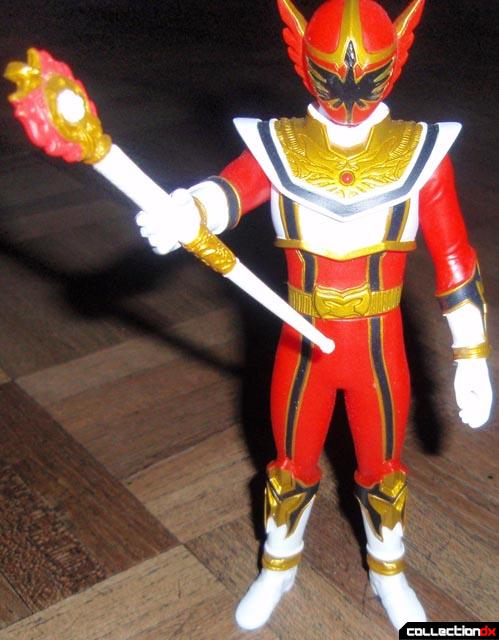 From what I know of this toy, this is part of a long running series in Bandai’s Soft Vinyl collection. Titled the Sentai Hero Series, this is part of the 3 set series with the others being Rider Hero Series and Ultra Hero Series. This figure is no exception from the earlier and the rest as there are limited movements available. Movements are only in 2 major areas, the waist and the 2 shoulders. The Magiranger Series each came with their signature weapons. For the Legend Magiranger Set, we have the standard weapon for all 5 of them, the Dial Rod. As you can see, the details of this guy is superb and cleaner compared to older versions (back in the 90s) with some smeared paint can be seen on various parts of the body. I personally like the Phoenix wings on Ozu Kai’s face in Legend mode. Do notice that the Dial Rod is detailed significantly well too and has the lion’s face made clear. 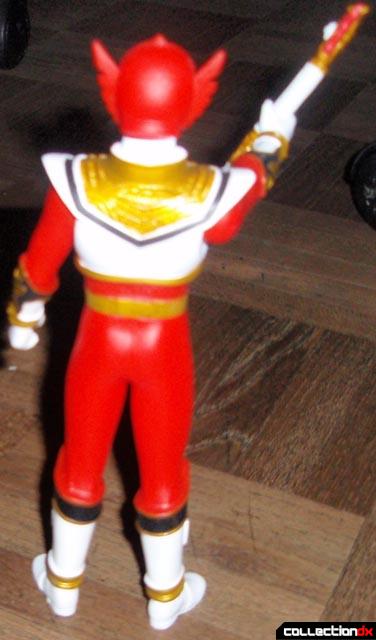 Well this is how it looks like at the back. All the details are done nicely and are clean. Originally, I don’t like Soft Vinyls due to their limited poses but when I came to my senses, only these guys are available for most of the Sentai and Rider heroes. In attaining more support for this line, Bandai Hong Kong has repackaged Sentai Hero Series figures beginning from Magiranger and re-releasing them to the South East Asian markets similar to the Rider Hero Series repacks. The only differences are they used Power Rangers instead of the original name.

This is how the box of the repackaged one looks like. Very generic but the text are what differentiates the Legend ones and the normal ones. This box is for my Legend Magi Red (or whichever one since I have 4 out of 5 Legends in these boxes, I got them confused) and the texts wrote Legend Power Ranger. The normal ones would write there Mystic Force Power Ranger (I know that because I have a Magi Red from this packaging too).

This is how the box looks like behind. It clearly shows you how many available characters are there for collection in the Legend line but no clear cut identifications of which one is in this box, making me search high and low for them to make a complete set. However not, the figures’ foot soles still have the embedded TV Asahi and Bandai China 2005 writings. TV Asahi is written in Kanji and Katakana and this would show that it is a genuine Magiranger line product. At first, I was wondering why Bandai US did this, but later I found out that it wasn’t Bandai US’ doings, but Bandai Hong Kong’s doing and I am very happy for this. A very interesting alteration on the Legend Magi compared to the normal Magi was the head can turn in the normal Magi but this function was completely revoked in the Legend lines. I am not sure what happened to their molds but I don’t often see SHS (Sentai Hero Series) with turning heads. The normal Magi Red will be reviewed on a later date. I’ll cover my other Legend Magi Ranger figures as well later as I have 1 with the original Japanese Packaging. For spoilers, Bandai Hong Kong also altered the design of the included Character Card and omitted the numberings in it. 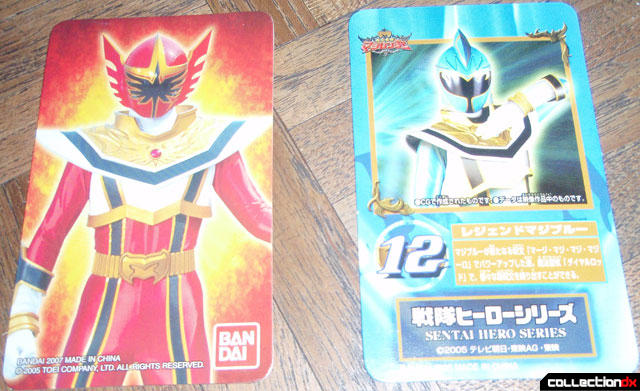 The pictures show how different the pieces are for the cardings. Bandai 2007 is seen in the Hong Kong repackaged edition (the date Magiranger aired in Hong Kong and the date Mystic Force came to Malaysia). So, this basically settles the first part of this review. This is longer for one figure because I had to explain every detail regarding the different packaging but will do more figures in one later.

Cool, I saw these buggers around in the Philippines as well, from my experience with the line they seem to place a whole lot of detail for that small price. Hope you get to cover more of these toys!

Yups, I'll be doing these toys and some DX stuffs review sooner. The next review would be on the remaining 4 Legend Magi Rangers. I am still considering whether to get the other normal Magirangers too as I still feel that collecting only Reddys are good enough for me, a local shop here has one set left of the 30 Sentai Red Heroes Set priced at about US$180+ from conversion wise.

Truly, these buggers are only available in South East Asian countries particularly in Malaysia here and Singapore. I failed to find Magi Shine anywhere and I am feeling a little bit of regret on not getting it before they became discounted bundles.

As of now (just started collecting Sentai Hero Series), I have a set of Legend Magi Rangers, Magi Red, Bouken Red Dual Crusher (annoyed by this one), Super Geki Red, Super Geki Yellow, Geki Violet, and Go-On Red. I might add more but still Reddys would be my priorities still.

Oh yeah, a question to the moderators here. I finally got my DX Action Liner 01 - 08 set so should I just review Liners from 05 Isurugi onwards or should I do it with Gouka?