“In brightest day, in blackest night.

No Evil shall escape my sight.

These are the words that ring out and give goose bumps to those that know what this stands for, and nobody stands out for this like the resident Emerald Crusader of Sector 2814 than Hal Jordan. 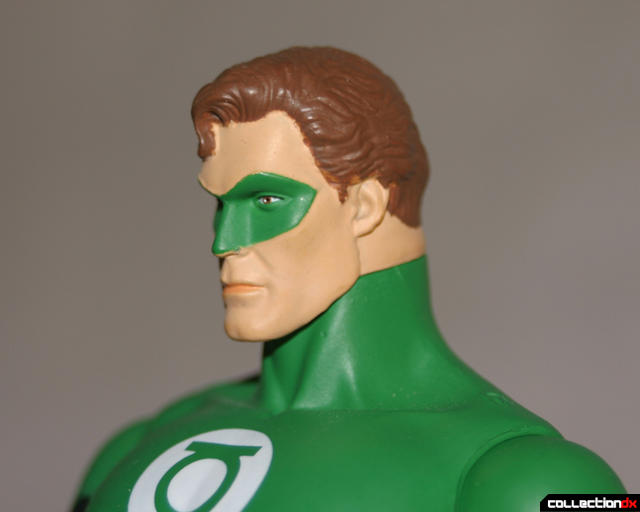 For the novice, Green Lantern is one of many legacy names of DC Comics superheroes stemming out of the Golden era. A legacy name is one that is passed down through the ages, in some cases with new origins. For instance, the original Green Lantern, Alan Scott was an engineer who uncovers a green meteorite and carves a ring out of its ore with its ornament in the shape of a lantern. Using his mind, he could create flaming emerald constructs that his mind would imagine, and the first Green Lantern was born.

In the Silver Age, we are introduced to Hal Jordan who was a grounded test pilot selected by a dying alien to be his replacement and given the emerald ring. Now unlike Alan Scott, Jordan was part of a bigger group, the Green Lantern Corps, the intergalactic police force created by the Guardians of the Universe to patrol and protect the stars. Earth just so happens to fall into his jurisdiction as part of Sector 2814 (out of 3600 according to the Guardians’ division of the universe).

Confused, dazed, or dumfounded? I apologize, but for more, visit your local comic book store. NOW…

Moving away from the history of the character, we go to the artist for which this figure is born. While not the originating artist, Alex Ross is one of the premiere artists in the history of comic books, whose artistic style has given forms to just about everyone from Superman to Spiderman. In his “Justice League” line, Ross has provided his sketches and paintings of characters for the production into collectable figures. These figures are to coincide with a long term maxi-series (12 issues long) event called “JUSTICE” which is written and painted by Ross himself along with Jim Kreuger and Doug Braithwaite. 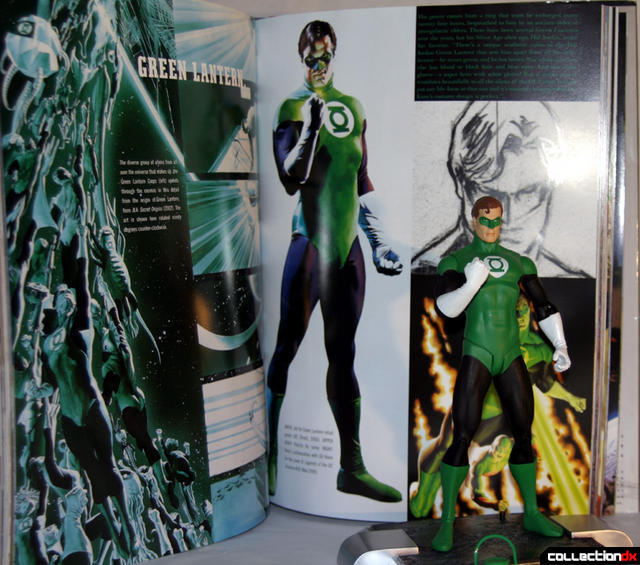 Simply the greatest incarnation of Hal Jordan in a figure form, period. While not like any action figure or collectors doll like have been put out on the market, this one represents the true character of GL. The figure is molded in heavy vinyl and painted. The detail of the paint is especially good for the face and the costume is well done with little paint spilling. His sculpt is remarkably realistic much like Ross’ artistic style (within his form close to the Golden Age style). The figure stands about seven inches tall with the look only Ross could pull off. 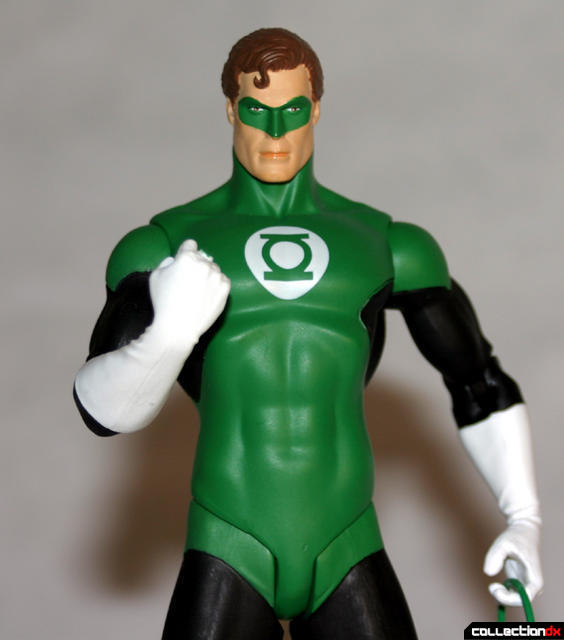 The figure has a meager nine points of articulation, but for good reason. It’s so much more of a statue piece than an action figure and that’s what it is meant to be. The majority of the collection of Alex Ross characters is done in accordance to his sketch books. His shot of Hal Jordan show him standing with his right arm flexed and his ring hand clenched and facing forward. Due to that fact, the right arm has a very finite range of motion.

Personally if I wanted a Hal Jordan action figure, I would have gone with the “Green Lantern” series figures designed after the sketches of Ethan Van Sciver (artist for Green Lantern Rebirth, the mini series of 2004 written by Geoff Johns that marked the return of Hal Jordan). Even then I can state that there wouldn’t be any difference in the articulation. It’s a matter of look than anything else.

As part of the character, Hal Jordan comes with his personal power battery.
A jump back to the history to explain: the green power battery is shaped like a lantern and is a recharge point for Green Lantern’s energy. It gives a ring bearer enough power for 24 hours before the ring needs to be recharged. Recharging the power ring usually requires the reciting of the Green Lantern’s Oath (see the beginning of this review).

Back to the figure: the power battery is the one issue of quality control problems. It’s molded in clear ABS plastic and is painted; however there are areas on mine that show significant signs of paint chipping.

Additionally, all figures of the collection come with a base stand and a peg to set in the figure’s foot to hold it in place.

Like I said before, this was a matter of aesthetics over action. As an Alex Ross admirer and more of a Green Lantern fan than anything else, this was worth it. It’s not something to go toe to toe against the dust bunnies on my shelves but it is a great desk guardian here in Sector 2814.