There is a surprisingly large segment of the American Japanese toy community that grew up watching the Jim Terry produced TV show, Force Five. Each day after school, a different cartoon, a different obsession created. Force Five would eventually lead us to reclaim that part of our lives, by collecting toys from the shows that had such an impression on us.

The Soul of Chogokin line from Bandai has brought many of the best representations of these characters to us. Danguard Ace will likely never be made. Grandizer and Starvengers (aka Getter Robo G) have already seen the SOC treatment, and nobody really cares about the Spaceketters. The only one we all really were waiting for was Gaiking.

We now have our SOC Gaiking. But can it possible live up to the legend? 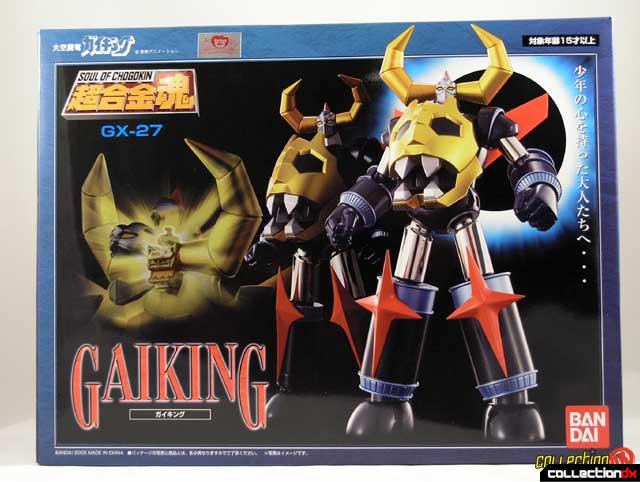 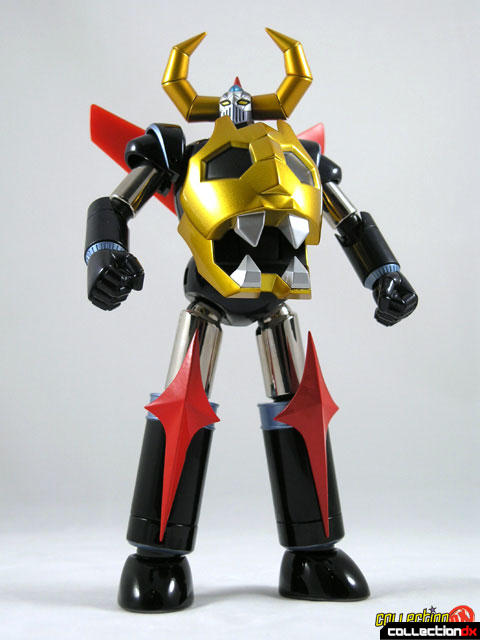 Inside the box, you get a Styrofoam tray that holds the body of Gaiking, a cardboard box featuring stand parts, and a plastic tray to hold all the accessories. This is pretty standard SOC fare, but I would really love to see Bandai go back to the one piece Styrofoam tray of the old days.

There are really too many parts included to mention, but here are some highlights: 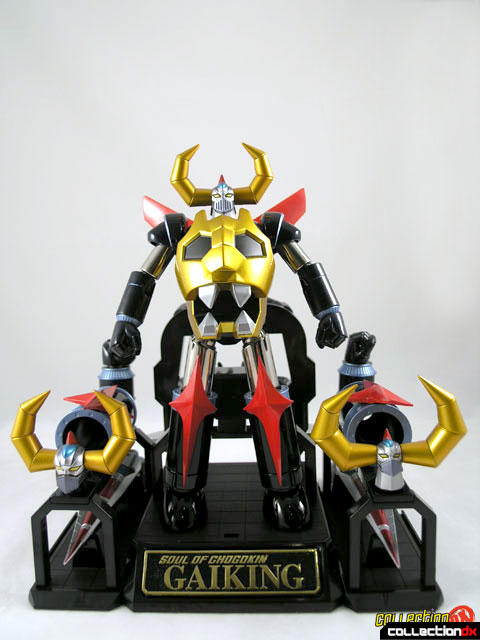 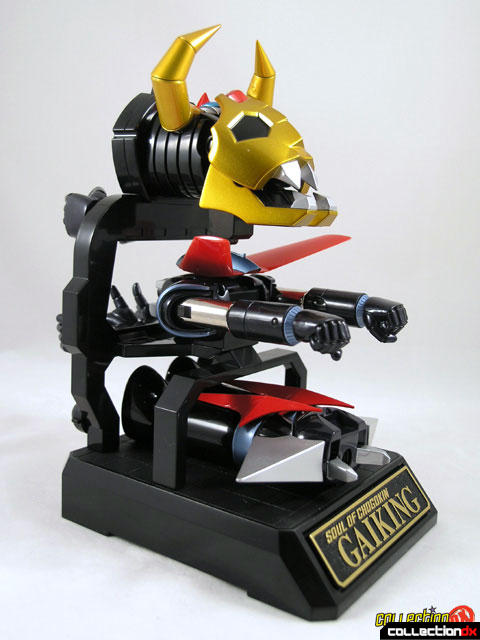 Gaiking in normal mode is the Gaiking we most remember. He is about the same size as Getter Dragon, about 8 inches tall. 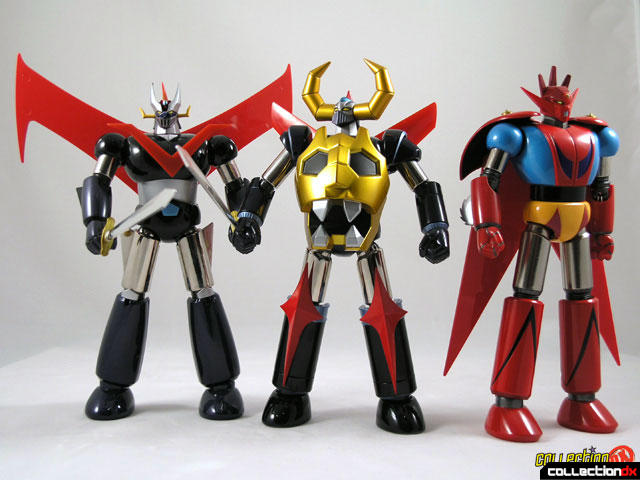 Initially, Gaiking comes in the individual components as seen in the show. The leg unit features removable feet and collapsing legs, to create a shorter component part. The feet can be removed by pressing a button on the back of the foot. Once locked into place, the feet are very secure. The legs can be pulled down and a click will secure them into place. 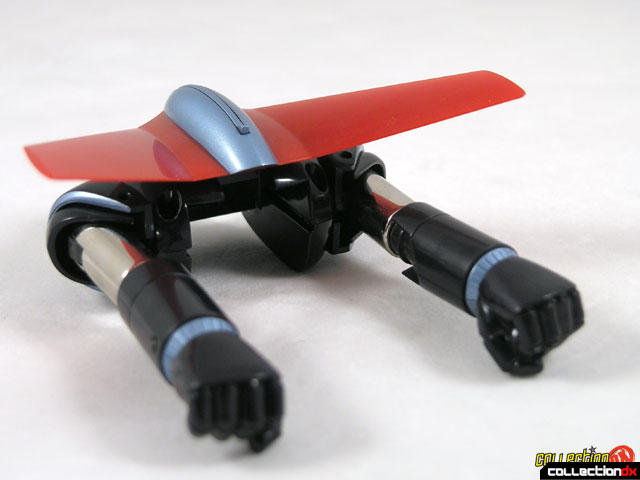 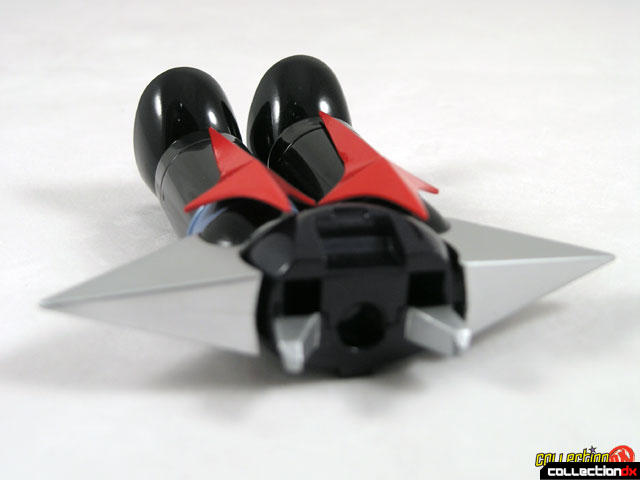 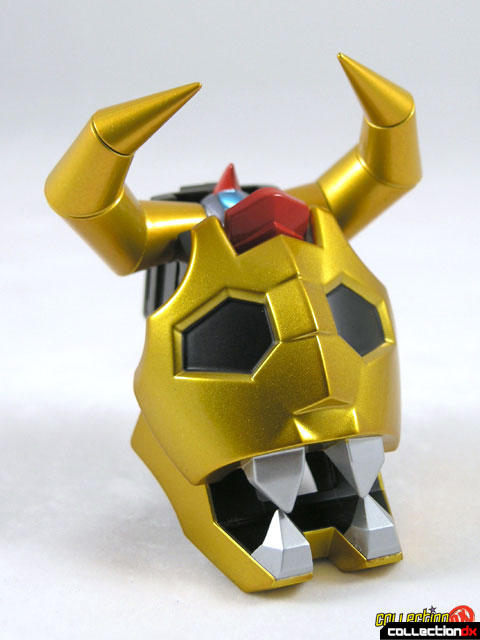 However, the legs on mine can unlock pretty easily. It will stand fine, but when posing it can get a little annoying. Removable spikes attach to the side of the legs to replicate the look in the show. These are stored in the base when not in use. The leg stars attach securely via small slots in the lower legs. The stars are a softer rubber, probably to prevent breakage or injury. A button on the back of the waist secures the chest unit to the lower half. The waist, upper legs and feet are all metal.

The chest unit features the most significant feature of Gaiking, the giant gold skull. The skull attaches to the body via 2 hinges, which allow for a surprising range of motion. The top portion of the skull is metal. You can recreate Gaiking's Killer Bite move with ease. 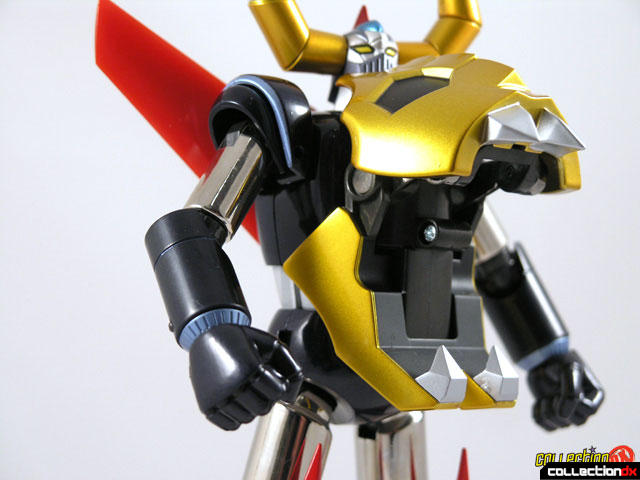 Any one of the three included heads can attach to the peg on top of the skull. The best way I've found to attach the head securely is to open up the skull head from the top a bit, apply pressure to the red tab while simultaneously attaching the head. The head rests on a kind of elevator, which hides the head when the skull is being displayed as a stand alone component. When the head is hidden, the red tab rises.

The arm assembly separates from the chest to form the third component of Gaiking. Here, only the upper arms are metal. The shoulders have expanding shoulder pads, to give it more girth in super mode. The wing attaches to the back via a tab, and features a neat gimmick. On the center of the wing there is a thin strip with a tab at top. Pull that tab down to reveal the Back Shredder weapon. The piece hinges at the bottom, so pull it all the way out, slide it up on the hinge, and snap it back in place. No swapping parts, and no chance of losing it!

Gaiking comes with regular style arm connectors and launching (Counter Punch) fist connectors. The launching fists are really powerful. You can also attach the Miracle Drills to any of the hand connectors. Also included are hands that can hold the leg crosses. 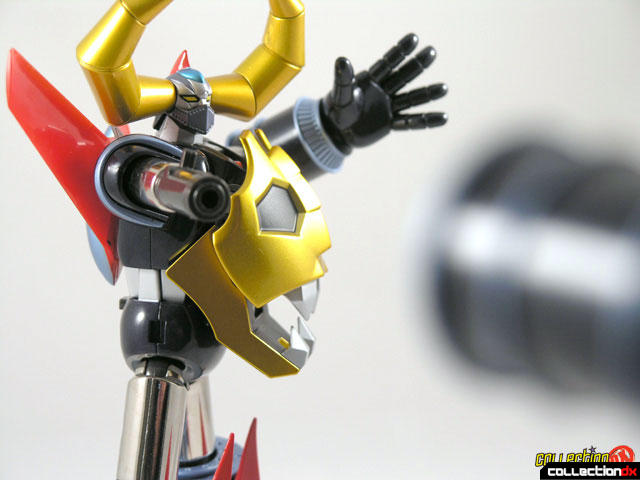 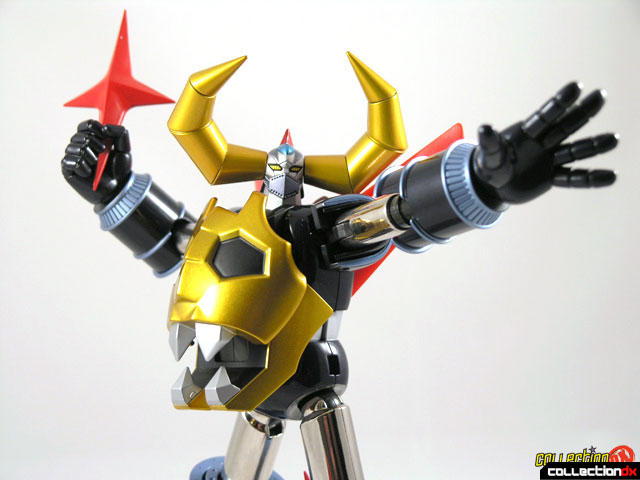 You can also replicate the powered up mode of Gaiking with a series of accessories. For the legs, you get larger feet, legs and leg stars. The legs are actually shells that slide over the existing legs. Unfortunately, these leg shells do not like to stay in place. This is the weakest feature of the toy. The arms also get power up sleeves and hands. Gaiking comes with a handy little red tool used to pop off the power up parts due to the tight fit. If only the legs had such a tight fit. You also get a large sized head for this mode. Also included is a third head with removable faceplates for when Gaiking does his Open Face attack. 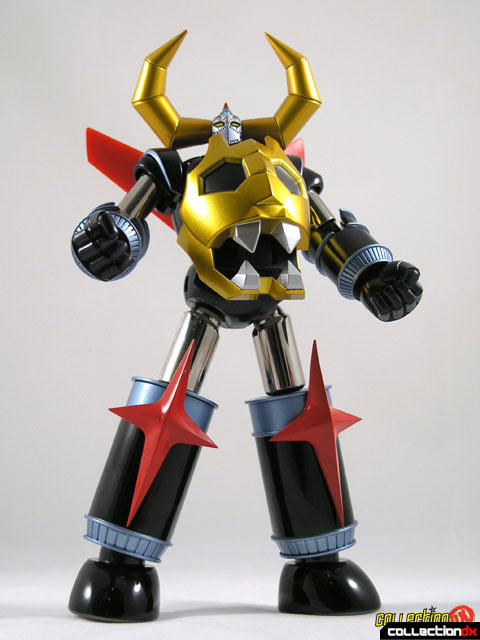 The stand comes in several parts and needs to be assembled. The nameplate is molded plastic again, something that Bandai can't seem to make up its mind about. All the parts have a place on the stand except for the red tool, but that makes sense. Some parts plug securely into pegs, but other parts, like the extra feet and the hip spikes, fall off with the slightest movement. The base is actually 3 parts, and it is just held together by tabs. You cannot move it without a bunch of parts falling off of it. Why can't Bandai give us a base that will hold everything securely? You would think that with Japan being earthquake prone, these things would be a bit more secure. Another nitpick I have is there is no support for Gaiking in robot mode. There are no grooves for his feet, and no clips to keep him in place. Gaiking tends to be a bit top-heavy, and the extra support would have been nice. The individual components however do secure resting places on the base. Go figure.

Although I have a few minor complaints, for most part, Gaiking is really, really nice. It looks great, has nice proportions, and is fun to play with. The fists shoot far, he can recreate many poses from the show, and the power-up mode is an added bonus.

On the down side, the legs are a bit weak, and the power up legs are not tight enough. The base kind of sucks and Gaiking is a little top heavy. Some people might disagree with me on this next point, but I actually think there are too many parts. Just give us articulated hands, for example, and let me pose them.

Regardless, Gaiking is cool, and a must-have.

I wonder how long until we see a yellow belly version?

Are you listening Bandai?

dunno if anyone gonna notice this comment, but...it seems to me this gaiking, is pretty good in terms of anime accuracy. but however, in a toy, it seems to be lacking the most important element. equipment!!! even though it is a diecast figure, weaponary is definitly protocal ;D. hehe, yeah i think it should include some sorta spear or axe, much like the regular chogokin set bandai made of gaiking. thats about it. is it just me, or paint chips on SOC is a commonality? heh

I was just wondering, can you take the front off of the skull to simulate his full "open face" mode?

Not on this version. For the newer Gaiking from "Legend Of Daiku Maryu", you would want to get the GE-10. That has the "open face" feature.

Thanks for the info. This thing would've been perfect for me too...