In 2005, the evil Infershia clan made their return to the surface of Earth since their defeat ten years ago in their secret battle against the peaceful Sky Saints of the mythical land Magitopia.  Miyuki Oz, mother of five, is the only human who has known what is going on, and remains as the sole defender against the Infershia.  But just before she is killed by one of the Infershia’s generals, she reveals to her children their family history as secret defenders, and gives to them wand-like Magi Phones, which allows them to access their magical legacy.

The appearance of a small, yet inquisitive green frog into the Oz household sent older sister Urara running for cover in fear.  However, she was the only one who could hear its simple and faint request: “Kiss me, kero” [the sound a frog makes in Japanese].  When she finally mustered the courage to deliver the peck in the middle of a battle, the small animal (who was named Hikaru-kun [to shine, light] by the other siblings) unexpectedly transformed into a handsome young man.  He was actually the Heavenly Sky Saint Sungel, one of their late father’s apprentices.  He had been accidentally cursed to become the frog form when he fought against the traitorous Sky Saint Raigel fifteen years earlier.

Using his elemental power of the shining sun, Hikaru can change into the gold armored MagiShine, and uses his Grip Phone & Punch Cards to summon the Travelion Express- a huge magical dark blue, gold & red steam train that is nearly a mile long.  It is capable of traveling between the infinite numbers of magical Marudeonna universes on invisible train tracks.  The Travelion Express is made up of six components, none of which have specific names: 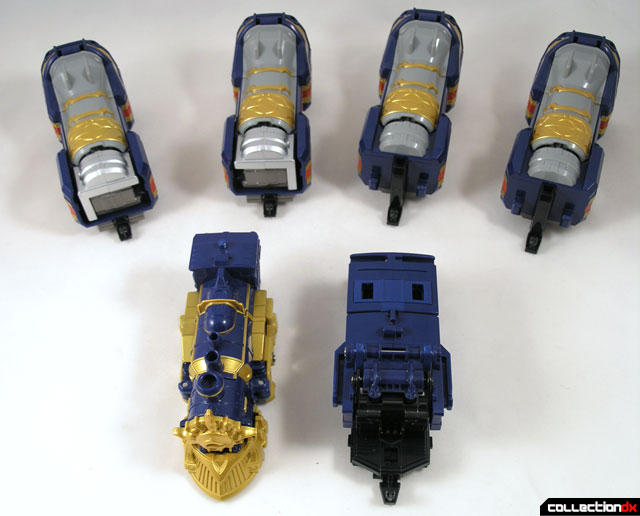 Toei Entertainment, Ltd.- producer the Japanese Super Sentai genre since its inception in 1975- borrowed dozens of elements and ideas from fantasy and magic stories from many cultures, countries, books, stories & movies to create “Mahou Sentai MagiRanger”.  So, the creation of the Travelion Express is most likely a nod to the crimson red Hogwarts Express, a steam train from the modern popular “Harry Potter” series of novels & movies spurned by British author J.K. Rowling. 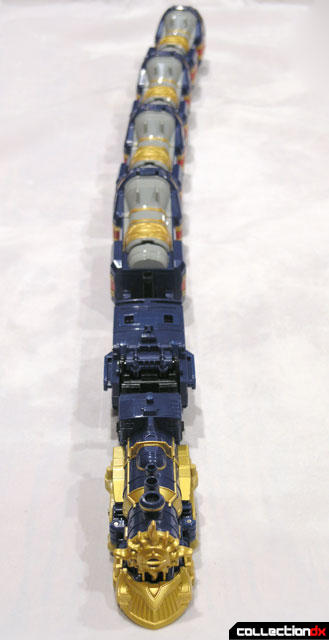 Assembled in its train configuration, the Travelion Express stretches out to 35 ½”- not quite as long as the only other previous train-combo mecha, the five-part DX Grand Liner from “Kyuukyuu Sentai GoGo-V” (1999), which was 50 ” long, but 18” tall in its combined robot form.  Each of the joints between the cars can free-rotating about 30º altogether for each.

The DX Travelion also has two AAA-sized batteries inside the engine section, which provides it with a simple light-&-sound feature.  Pressing a button on the right side of the dark blue boiler will produce either a whistle blowing sound twice, or the sound of a train running across tracks for about eight seconds.  Both sounds are accompanied by the red LED lighting up inside the front of the gold seal on the front of the engine.  When the feature is first turned on via a black switch on the right side under the cab, the whistle blows and the light flashes again.  Either way, the speaker is loud and clear!

MagiShine summons the Travelion Express and then jumps into the cockpit, with his trusted pet cat-genie Smoky behind him.  Then he uses his Grip Phone to cut a small hole in a Join Punch Card, calling out: “Mahou Transformation!”

In addition to being able to travel long distances magically, the six-part train can combine into the bulky Travelion.  With Smoky the Magical Cat shoveling Magic Coal into the Travelion’s furnaces from the cockpit, MagiShine can direct it to perform any number of magical attacks, or perform a series of rapid punches & kicks.

Transformation is fairly straight forward, requiring two changes per piece, minimum.  The tender actually gets the most attention as it splits itself in half and flips around.  Like the DX Tokusou Gattai DekaRanger Robo from 2004’s “Tokusou Sentai DekaRanger” (aka Deluxe Delta Squad Megazord, from “Power Rangers S.P.D.”, 2005), the DX Travelion also features a rare hidden electronic switch that activates when the golden scoop on the front is lowered or raised.  It produces the sound of metal clinking together and steam hissing, and the LED flashes again.  Now, unlike the DX DekaRanger Robo, or even the DX Galaxy Mega from 1997’s “Denji Sentai MegaRanger” (aka Deluxe Astro Megazord, from “Power Rangers in Space”, 1998), the hidden switch for the changing sounds in the Travelion is in a hard-to-reach place, so it can’t be easily triggered on purpose simply by sticking something into it.  I should also note that when the Travelion is in its robot form, the On/Off switch cannot be reached, so it has to be turned on before it’s combined if you wanted to use the light-&-sound feature.

The Travelion (back) in its robot mode is a big, bulky, thick-armored giant which aptly deserves its Japanese title mahou tetsujin [magic iron-god].  It has huge arms with big fists that look like they could punch through a mountain. 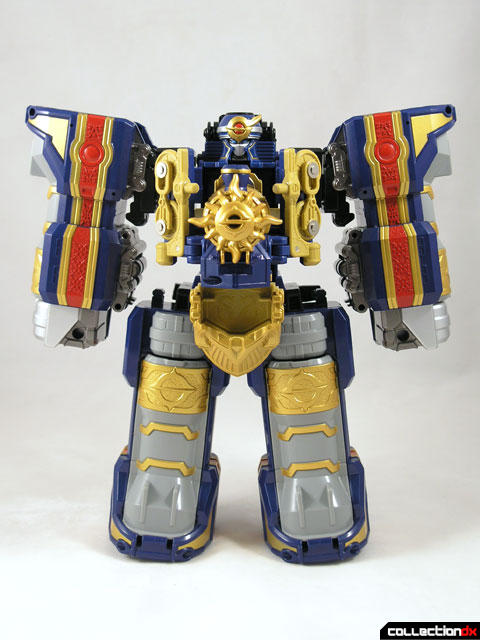 The large cylinder with the gold seal on the front of it projecting from its chest- the steam engine- looks like a giant bazooka; the Travelion can perform the Steam Bazooka attack from the top of its head.  It can also perform the Remote Liner attack- where the two smaller steam trains hidden in the leg compartments shoot out and wrap an opponent in track-like binds.  For finishers, the Travelion can perform the Destruction Fire attack- where it lowers the gold seal on the front of the engine and sucks in its opponents to be incinerated in its furnace.  Or- 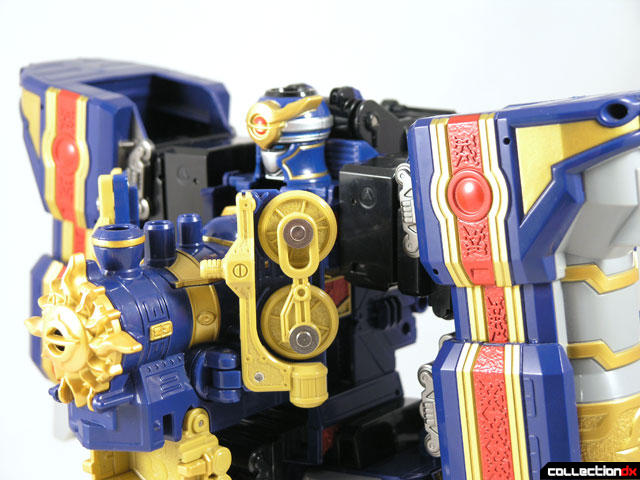 - it can produce the more powerful Destruction Fire Reverse Spray, which blasts magical energy out from its furnace directly at its foes.

For those of you wondering what the differences are between the DX Mahou Tetsujin Travelion from “Mahou Sentai MagiRanger”, and its English-speaking counterpart, the Deluxe Solar Streak Megazord from “Power Rangers Mystic Force”, it’s too early to say as of  the posting of this review.  Even though “PRMF” started airing in early February 2006, the Deluxe Solar Streak Megazord will not be released until late-Summer or early-Fall 2006.  There are no rumors either to confirm what possible [dare I say inevitable?] changes it will undergo.

Sets required for these combinations:

In addition to changing by itself, the DX Travelion can also swap out the chest component with both the DX MagiKing and DX WolKaiser sets, though this never happened in the show so they have no ‘official’ names.  The MagiPhoenix and MagiFairy figures from the MagiKing can be inserted into the Travelion’s torso compartment, as can Wolzard and his Jagan Shield.  But the opposite is also true- the steam train can be attached onto the torsos of either the MagiKing or WolKaiser to form giant cannons.  Heck, because they have the exact same components from the WolKaiser, you could even swap out the Saint MagiPhoenix from the DX Tenkuu Gattai Saint Kaiser and place the steam engine onto its chest as well!

If the “MagiRanger” line of DX toys had ended with just the DX Majin Gattai MagiKing and DX Majin Gattai WolKaiser, I would have been very satisfied.  However, for some strange reason, Bandai felt that a giant dark blue, gold, and red steam train would fit in with the fantasy & mythological creature themes.  I like the Travelion ‘n all, but not as it relates to the “MagiRanger” series; it just doesn’t work and, really, degrades the line.  Also, there were several places where different things could have been done to enhance play value:

It’s interesting in its own ways, but a lot more could have been done to it to put it on par with the others in the series.  But, it’s still a cool toy, no mistake about that.  The LED is really intense and shines out to over a foot away from the gold seal, the sound effects are clear & loud, the head is well sculpted & painted, and it’s big and bulky.  I recommend the DX Mahou Tetsujin Travelion more as a standalone set than I do as part of the “MagiRanger” line. 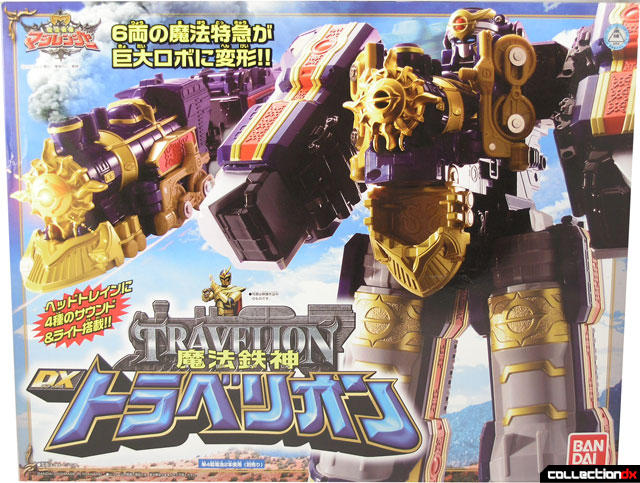 3 comments posted
I love my Travelion!

I love my Travelion! I would recommend though, if you are going to get it, to get the Toys R Us Japan exclesive version which includes a gold version of MagiShine's Grip Phone and a new set of more show accurate spell cards.

He's being a bit of a pill on this, but I need to give the webmaster/owner JoshB credit for all of the images and movies he took for this review. My own digital camera was non-functional, so he suggested splitting the review up since he had a DX Travelion as well. Thanks for the help, Joshua!
.
.
EVA_Unit_4A

I don't really agree with you. I think Travelion add something a bit more... old school to the line. True, it doesn't really "fit in" the line, but it gives some kind of "artillery power" to the overall knight-like style of the serie. Just my opinion...