Dalung Master is a sort-of knock-off of Grimlock by Leader Shine, the notorious and prolific bootleggers. Leader Shine was odd in that they didn't do straight knock-offs. Rather, they made toys "inspired" by the originals, often containing no duplicate parts from the original.

The toy comes in a killer cardboard box with great artwork all over. The toy is nicely visible in the cut-out window. 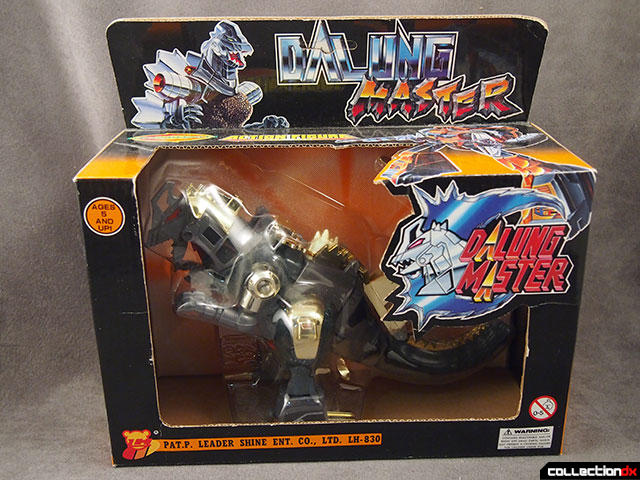 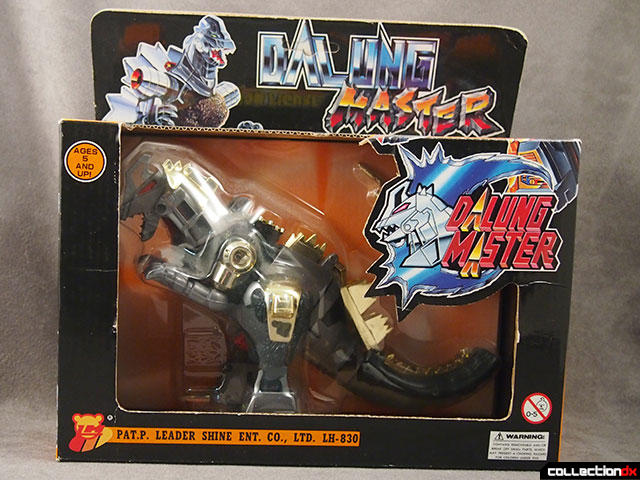 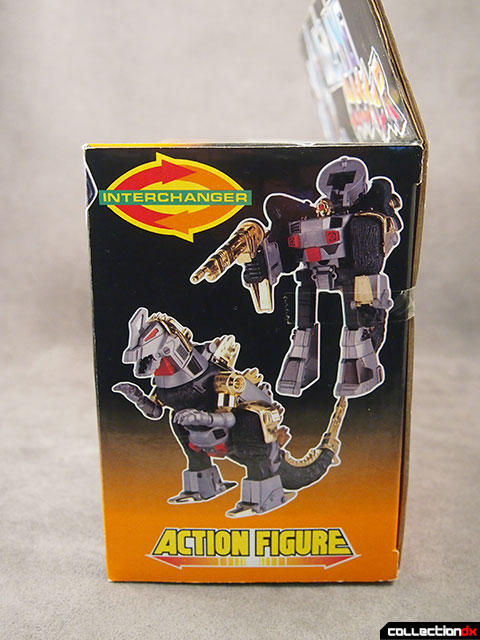 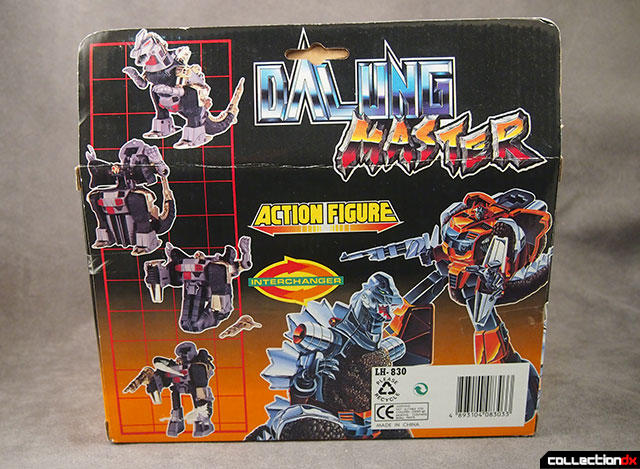 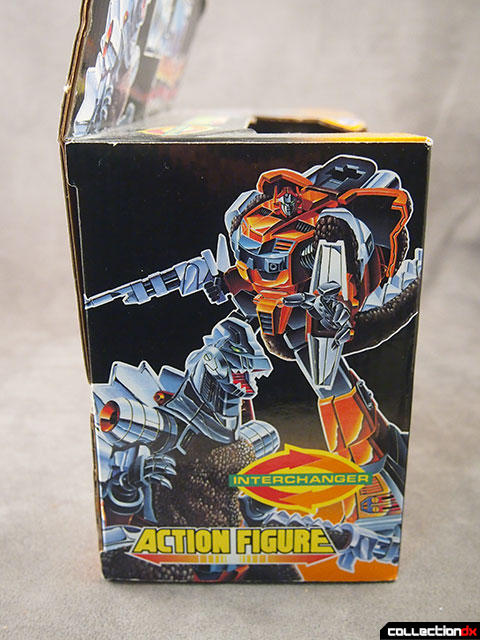 Of course this toy is based off of the G1 version of Grimlock. The transformation is nearly identical, but the parts are entirely different. 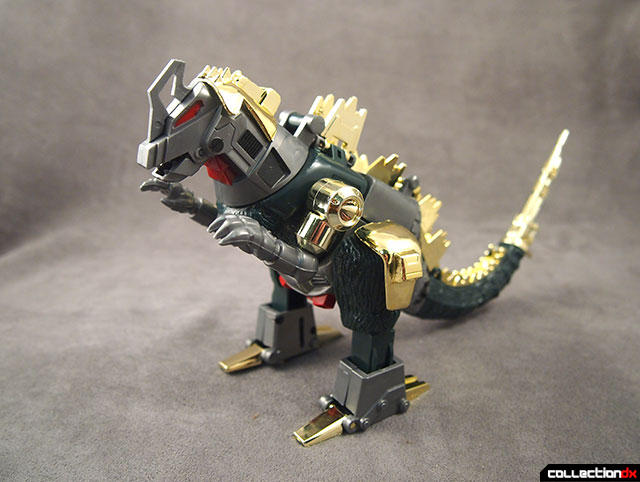 The dinosaur based Grimlock is now transformed into the dragon based Dalong Master. I have no idea what a Dalong is, or what it's a master of, but somehow I don't want to know. 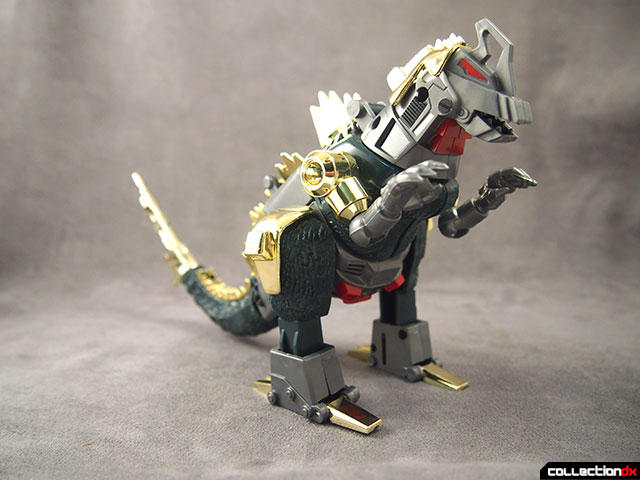 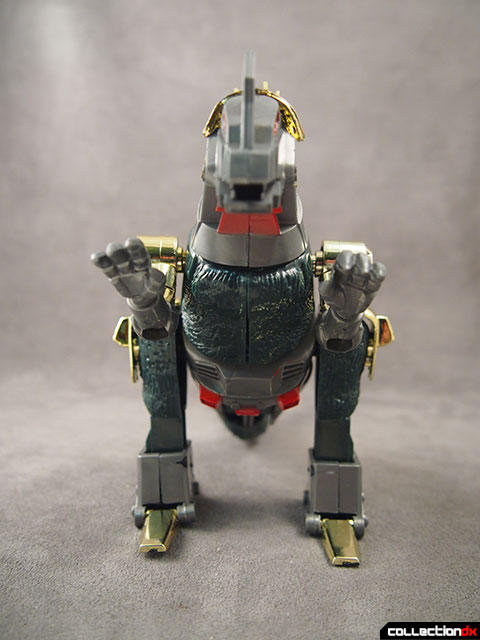 The entirely plastic toy has a variety of textures and finishes. The shiny gold chrome contrasts well with the green textured skin. 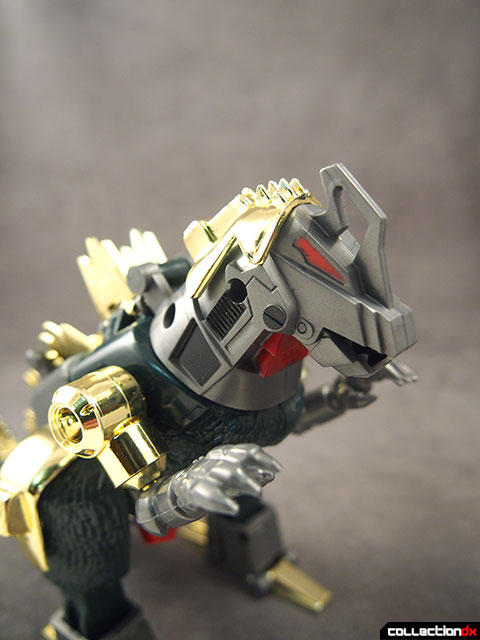 The quality is awesome. Leader Shine does some great work, as intellectually shallow as it is. It feels like a real toy.

The long gold tail doubles as the weapon in robot form. It dosen't stay on well. 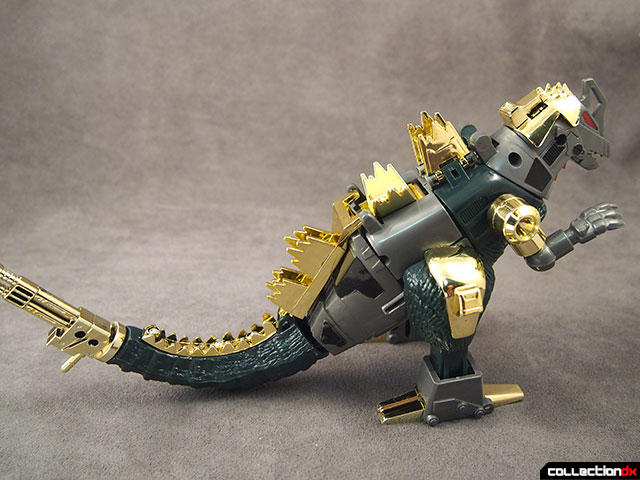 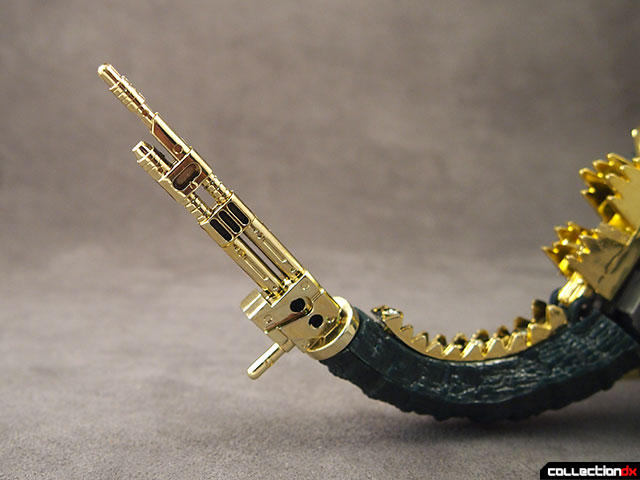 Robot mode is not as refined as the original and was clearly designed with the aesthetics of the dinosaur first. 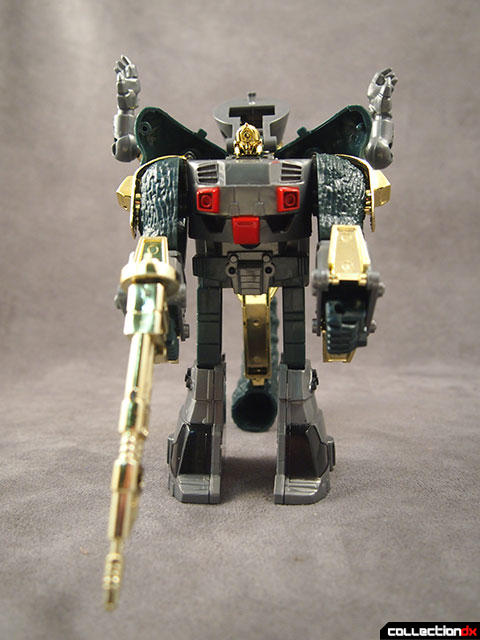 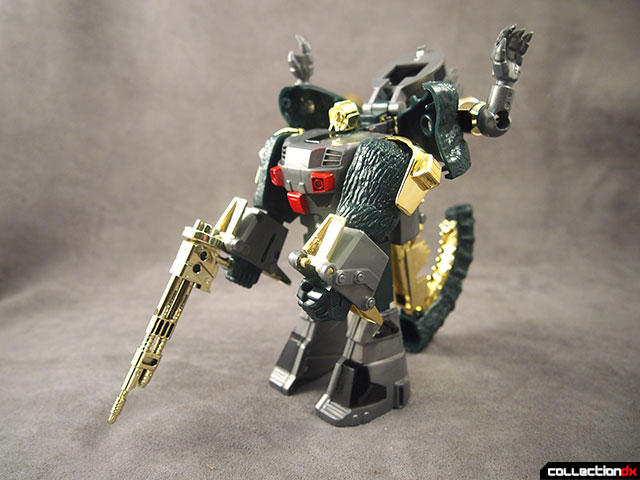 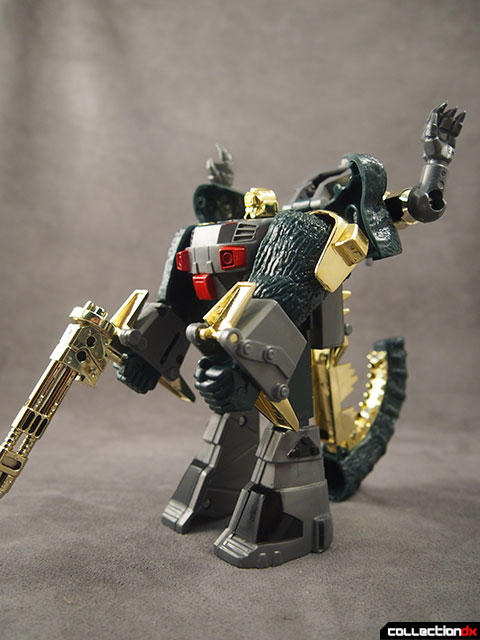 Shoulders and arms are huge, crap just hangs on the back, and there's no good place to put the tail. 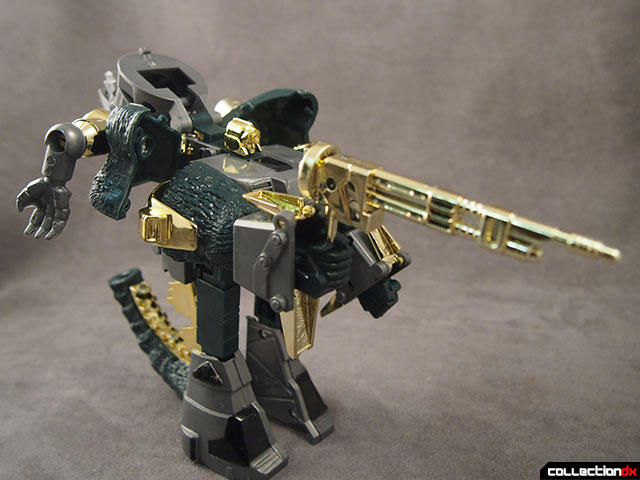 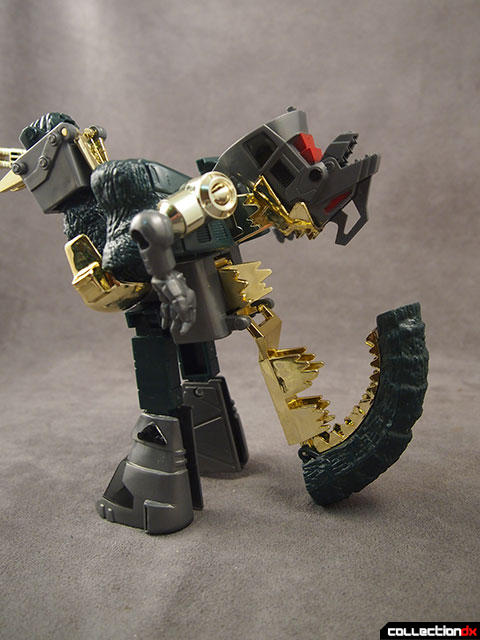 The head is freakishly small. 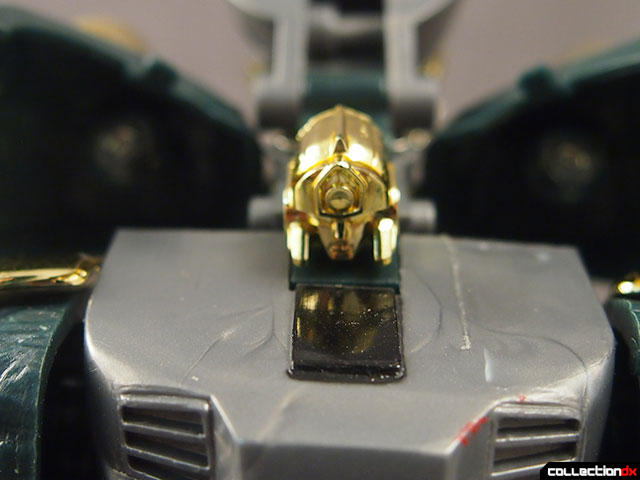 Because it's a bootleg of Grimlock, Dalung Master has been highly sought after by the Transformers collecting community, and has such, gained a bit of value. This is more due to the connection to another toy rather than the merits of this toy in itself. 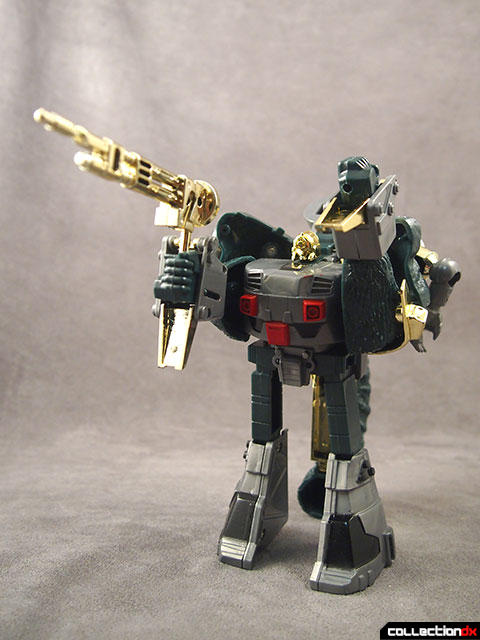 I do love the aesthetics of the Interchange brand that Leader Shine put out back in the day. They used quality materials with amazing packaging. This one is no exception.

7 comments posted
Please tell me they made the

Please tell me they made the other Dinobots too.

If they did I've never seen them.

I saw that you put 2005 as the "release date." Does that mean that this is a somewhat current run of the figure or was 2005 just the year that you acquired it? Is this from the same line (Prehistory something...) as the brown/gold KO winged Sludge? (he had a slim serpentine-like head)

This is a 2005 Release and an entirely different line than the Prehistory Animal versions of the dinobots, which were from the 80s.

Well in that case I'll have to track one down immediately if the price is right. Hopefully there's a few still lying around somewhere...

I love how unique this is for being a knock off they sure put a lot of work into it, all that extra vacu-chrome, I'll be keeping an eye out for this one...