The Revival Dual Model Brutishdog (リバイバル・デュアルモデル ブルーティッシュドッグ) is a reissue of the original Takara Brutish Dog dual model released in the 80s. It is not a straight reissue though, as Takara has made some improvements over the original toy. 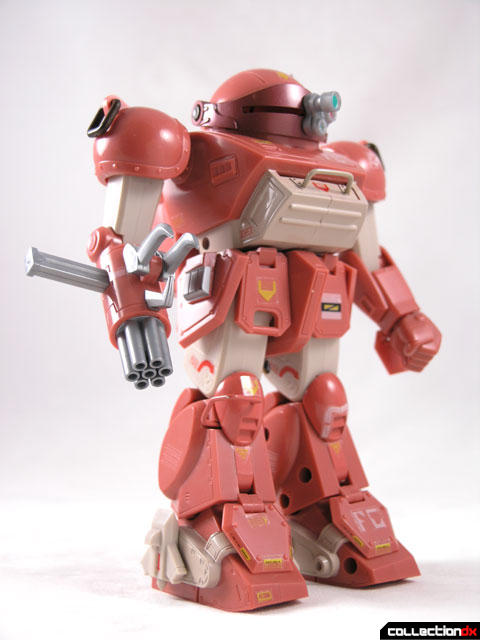 The Brutishdog ATM-09-GC comes from the 1983 animated series Armored Trooper Votoms. In the beginning of the series, Scopedog pilot Chrico Cuvie faces off against a PS (perfect soldier) named Fyana, who she pilots the Brutishdog in a battle against Chirico. While they are pitted against each other in the beginning of the series, their relationship would change drastically as time progresses.

The dual model series is always spoken in the same breath as the Takatoku Valkyries and the Takara Dougram toys – they are the epitome of quality mecha toys from the 80s. For some reason though, I was never really that into VOTOMS, so I had never picked one up. It wasn’t until I saw the Votoms series that I really had any interest in the toys. I saw this RDM Brutishdog on clearance at HLJ so I figured I would give it a shot. I am glad I did.

This toy is pure mecha goodness. It is made of sturdy diecast and plastic. It’s not one of these fragile expensive display pieces; it is definitely something designed to be played with. 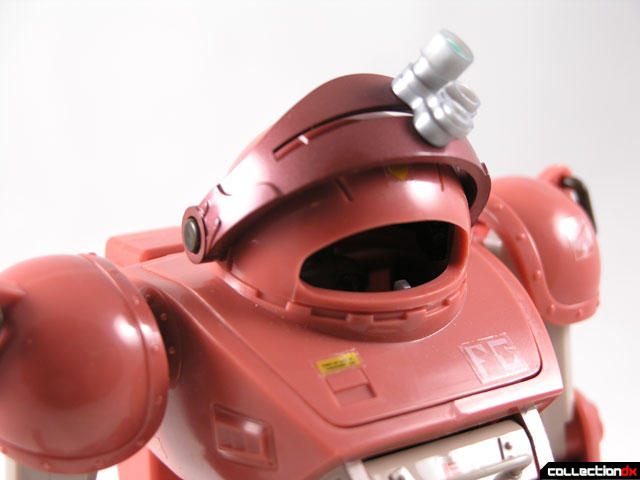 Starting at the head, the Brutishdog has an opening cockpit, rotating head, moveable visor and a three position scope. The antenna on the side is soft plastic so it does not break. Inside the cockpit is a seat for the pilot with articulated controls and an opening hatch near the feet. Inside the head there is some communications array detailing that must be assembled. 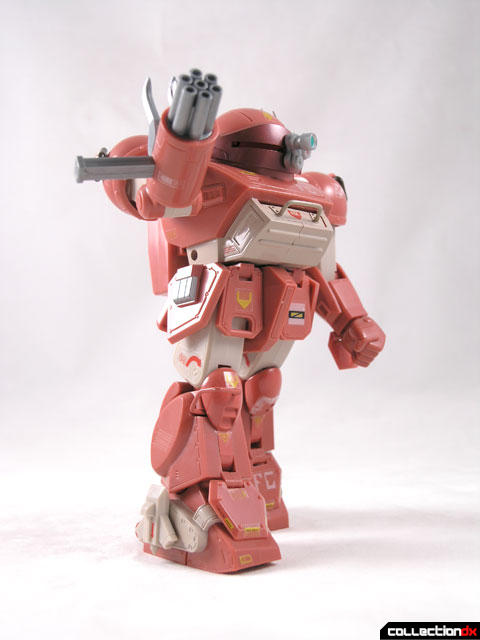 The arms have a lot of articulation, and feature stiff joints. The shoulders feature small chain links on each side. On the right arm you have a heavy gatling gun that clicks when you move it, and an articulated Iron Claw. You can insert ammunition magazines into the arm, or store them in a slot in the backpack. The left arm has an arm punch feature and you can swap the fist for an open hand. 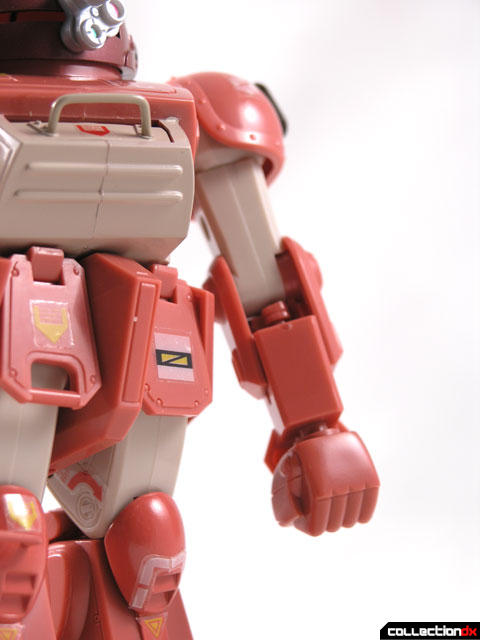 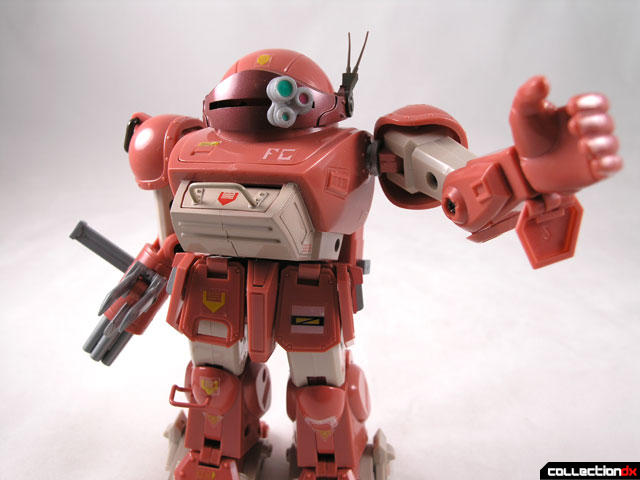 The legs are reasonably articulated and are actually removable from the body at the hip. This is helpful for when you are applying stickers. The lower legs feature joints that allow the Brutishdog to achieve Down Form. Down Form enables the pilot to easily enter the mecha. The feet have moveable armor that you need to attach. The wheels on the feet are moveable as well. 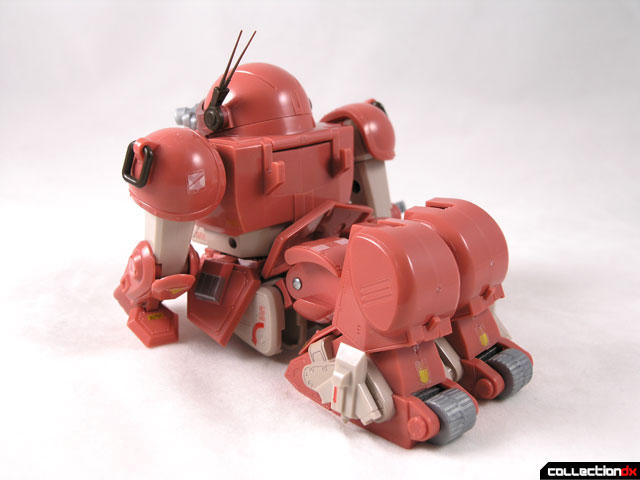 Also included are small figurines of the pilot Fyana in both standing and sitting positions as well as a Chirico Cuvie figure. 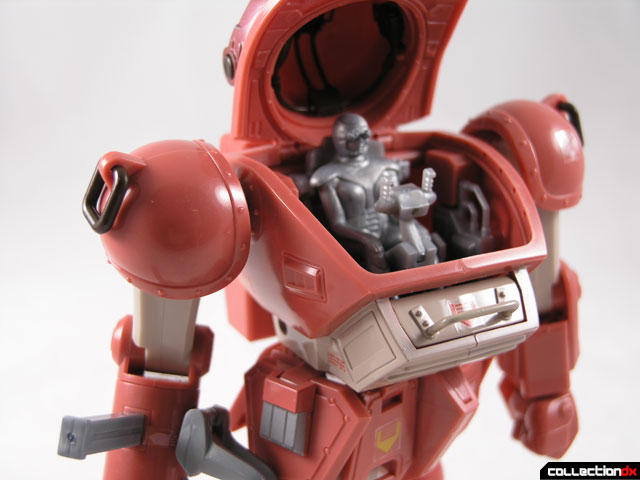 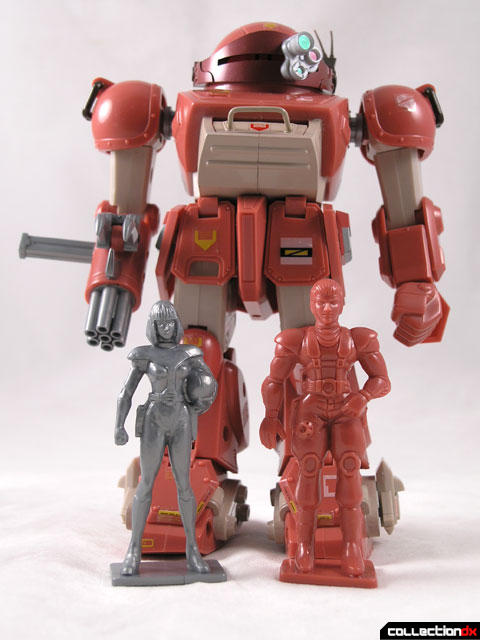 The packaging for this toy is incredible. The box has a full color illustration by the main mecha designer for Votoms, Kunio Ohkawara. The back has photos of the toy with some great engrish descriptions of the toy, with such fantastic phrases as “Extremely Gimmick!” 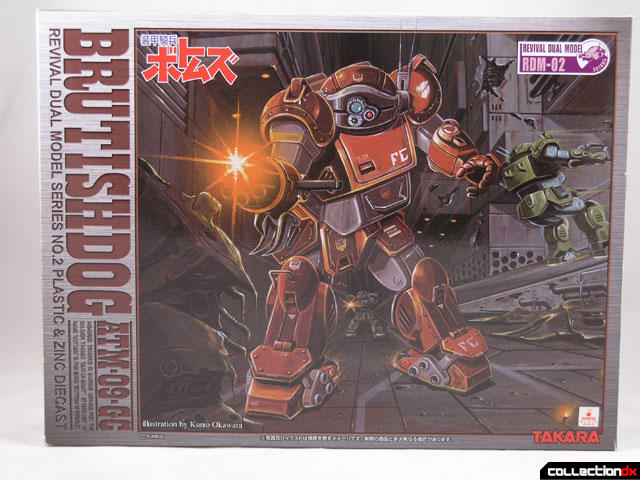 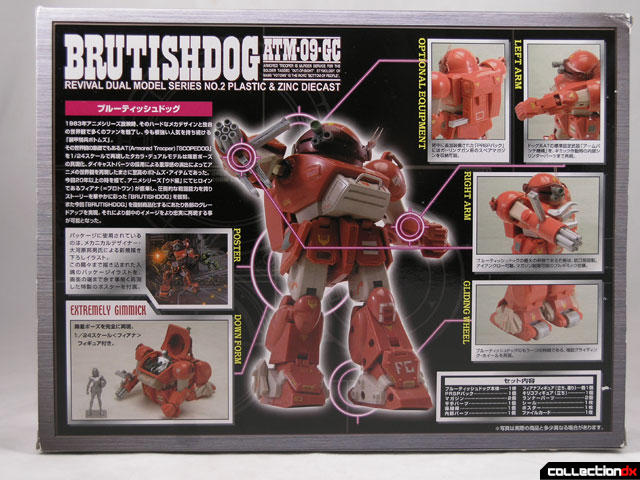 Inside the box you get a poster, manual, sticker sheet, a box for the accessories and a box for the Brutishdog. Some of the smaller parts come one a sprue and need to be detached and assembled.

While some of the other RDM figures got new accessories, this one got new paint. On the original Dual Model, the knees were unpainted metal. Here, they are painted the proper color.

Some people reported loose joints, and bent antenna on their Brutishdogs, I have had no such problems. Your mileage may vary. 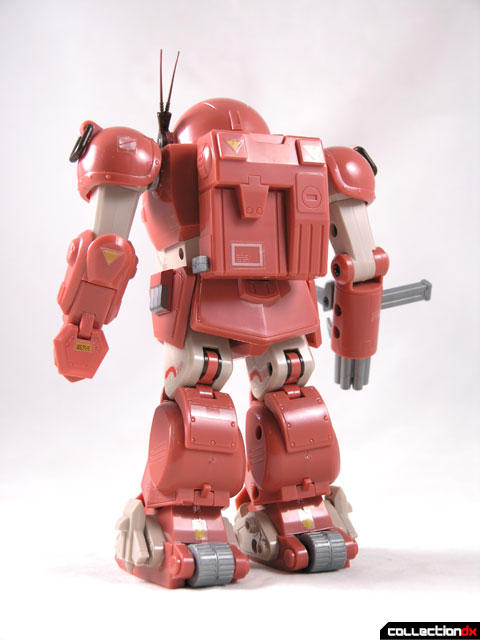 I really like this toy a lot, and I can’t wait to add the other Revival Dual Models to my collection.