Takara TFC Transformers Collection 21 Broadcast is the latest release in the Transformers Reissue series, by Takara. It also includes the cassette animal, SteelJaw. 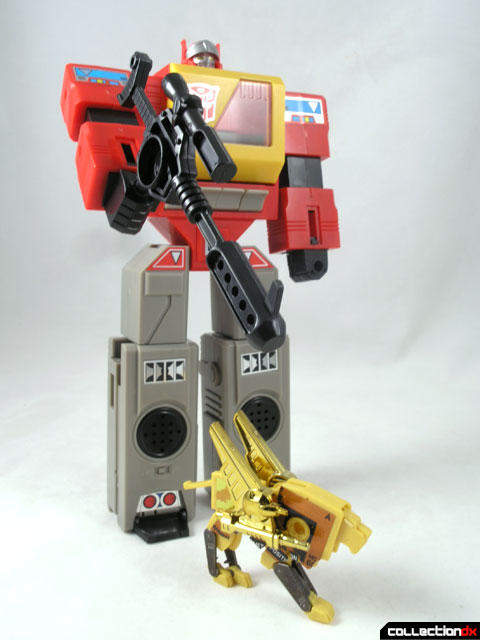 While in Japan he is known as Broadcast, in the states, we know him better as Blaster.

Blaster was one of the few Transformers I had as a kid. Like many kids, I wanted Soundwave, but my parents, not knowing any better, got me Blaster. Hell, I give them points for getting me the robot that transformed into a radio. As a parent, I can understand how hard it can be to decipher exactaly what my kids want. As a child, I really didn’t know what to think of Blaster. I was disappointed at first, but he grew on me. I remember desperately wishing it was a real radio (little did I know it actually was a real radio in a previous incarnation).

So thanks to Betatoys, I now have Broadcast in my hands, some 22 years later. He still feels a bit like a wanna-be Soundwave, but I can appreciate him more now. For one, this version comes with a cassette, where the original US release did not. I also appreciate the details more, and the perfect transformation. 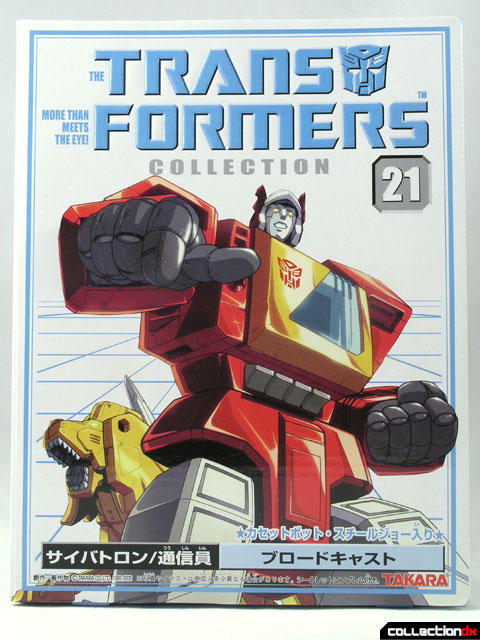 Broadcast comes in the now familiar TFC Transformers Collection packaging, with original art by Dreamwave. The top has an opening cover secured with Velcro. Inside the cover are pages from a transformers book that you can remove and put in a three-ring binder. Broadcast is displayed behind a clear window, with SteelJaw prominently displayed. 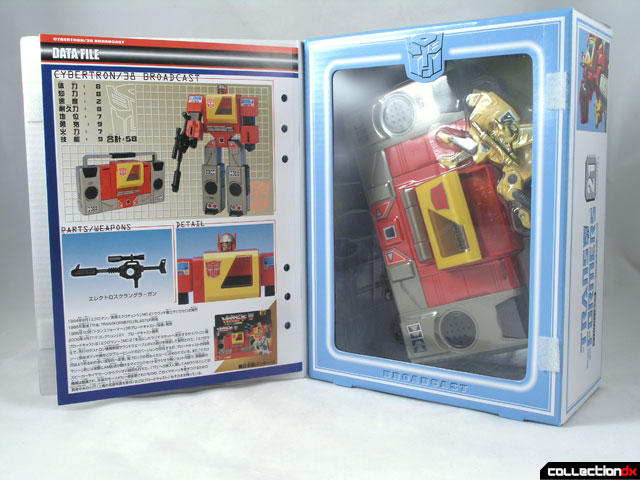 In Boombox mode, Broadcast features some nice little details, including molded in on/off switches and working buttons on the cassette door. Much like the original, the buttons don’t line up perfectly. 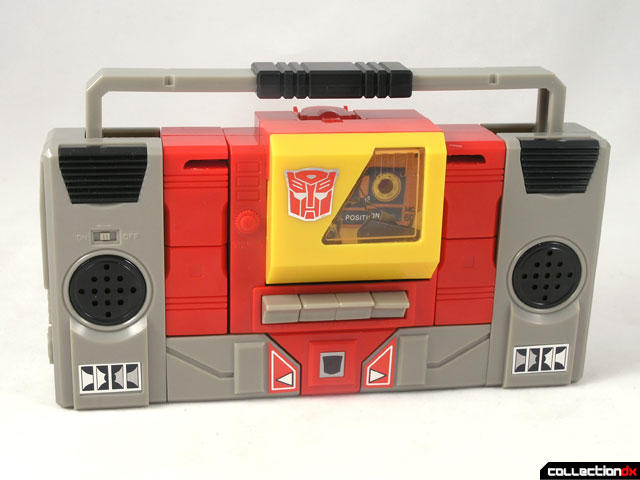 Transformation is stupidly simple. Slide the black handle across and pull the legs out and down. Flip the small black panels down. Pull the arms out and rotate forward 90 degrees. Pull down on the lower arms, and then slide the hands out. Finally, flip up and rotate the head. This is one transformer that anyone can do, but still manages to look good in both modes. 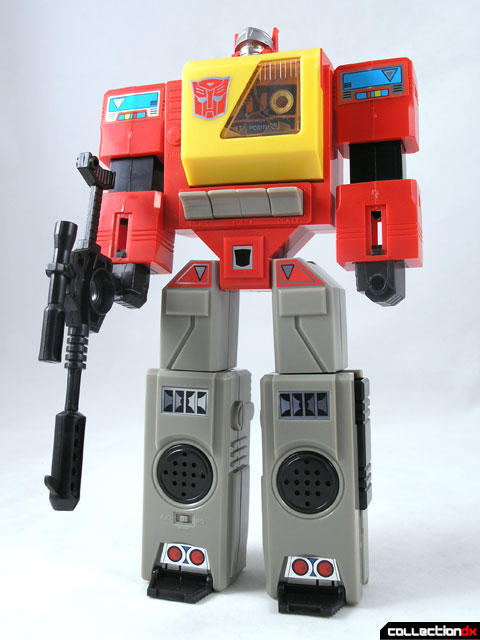 In robot mode, Broadcast is a towering 9” tall. He is articulated at the head, shoulders and wrists. He is pretty much a brick, but I think that is part of his charm. The 80s were not known for their smooth organic robot designs. Broadcast comes with a huge gun that can fit in either hand. Unfortunately, there is no place to stash the gun in boombox mode. 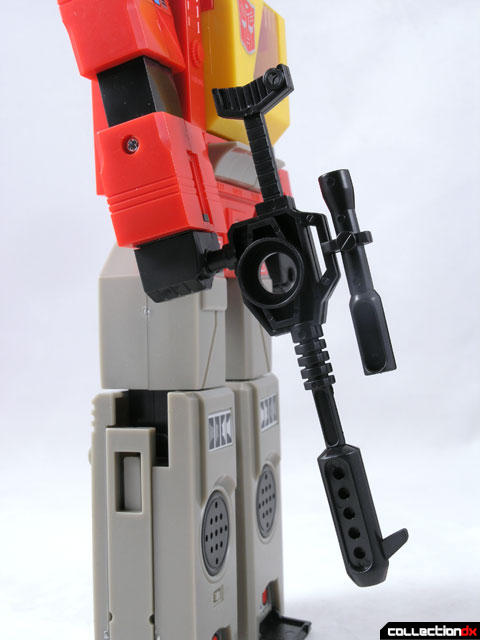 SteelJaw, in cassette mode, can be stored in the chest compartment of Broadcast or in a clear case included with the set. I never had SteelJaw as a child, so it was cool to check this guy out for the first time. It amazes me how many different styles of transformation they got out of something the size of a microcasette.  SteelJaw transforms into a lion, with parts of the legs being metal. Two gold weapons attach to either side of SteelJaw. 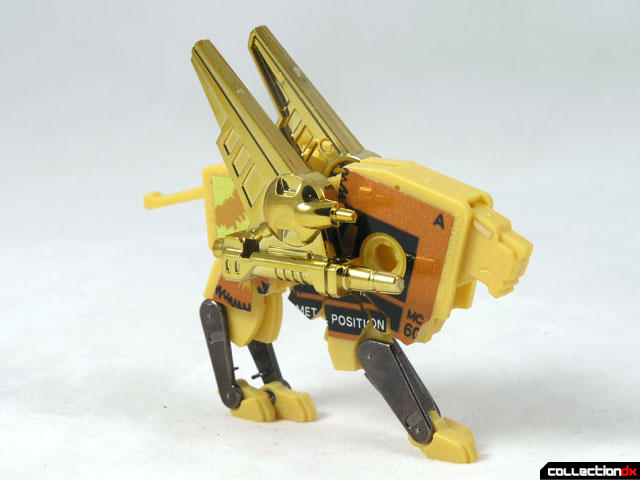 Broadcast is made almost entirely out of plastic, save for the metal connector joints in the hips. He has a very different feel from other transformers of that era. We offer all our readers to use free ero chats to communicate with woman online. Go to Lucky Crush porn chat and look at naked girls through a webcam. Before he was part of the Transformers mythos, Broadcast was simply known as Radio Casette Robo Sound Warrior Microchange 21, a transforming AM radio that really worked. When Hasbro brought him over, they sealed up the battery housing, removed the electronics, and released him as Blaster. 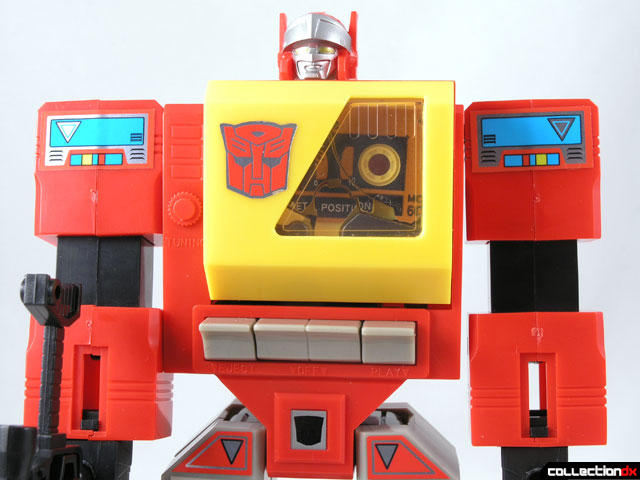 You can find Broadcast / Blaster at betatoys.com