Built and painted by Robert Braun

It's been six months since my last real build and a bit longer since my last review, but class is out for a month and here I am. About a month ago, I'm sitting at my desk, choking down my third root beer of the day while cramming for an exam in my Art History 2 class when all of a sudden I get an urgent Email from the boss man JoshB. Long story short, he got his hands on a domestic version of the LG Strike Gundam kit and needed someone to do some cheap labor. As everybody knows, Gundam SEED has landed on the shores of the US and brought with it a bounty of MSIAs and models, boxed in blister packages with pics of the completed model on the front. It's quite a bad digital scan job. Forgive my preferences Bandai, but I'll stick to my imports; better box art, nicer instructions and they're actually cheaper. I'm all for the release of Gundam models in the US, but this price by box size deal has to go. 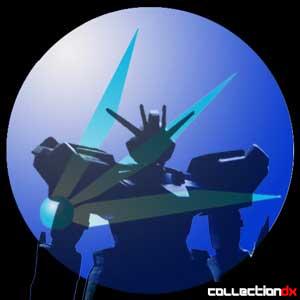 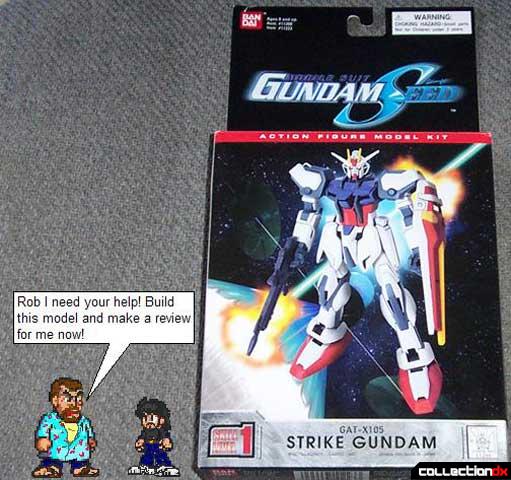 Out of the Box:

For the novice builder, LG means Low Grade, sometimes called a First Grade, which is a small scale kit with little assembly work to it. While it's easier to build, the downside is that your articulation is limited only to the shoulders, hips and neck, nothing in between. In short, it's just a quick shelf statue. While the domestic versions are priced around $7.00, you can import this kit for about $5.00, but for an extra $10.00 at most you can get the HG version. The High Grades result in more parts for the same scale that round out into a more articulated model. Also the HGs sometimes come with more accessories if you're a fan of armaments. 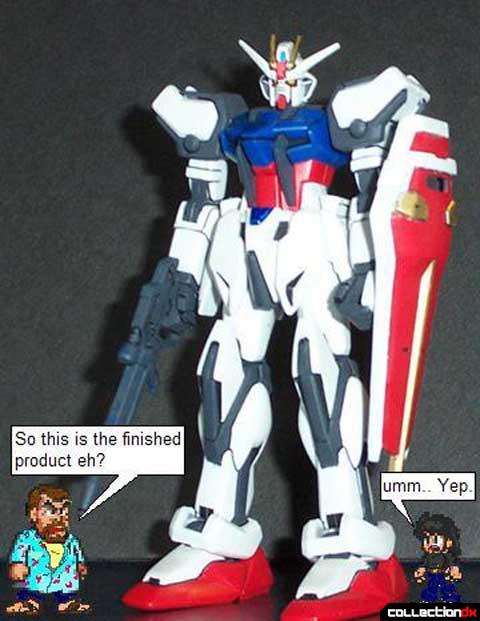 Out of the box, the quality of the plastic in the Strike is good; the standard smooth feel to it resulting in a very polished finish for most out of the box builds. Construction is still literally a snap and the painting peeves have been slightly nullified with the System Injection color molding (note the runner with blue, yellow, and red parts). 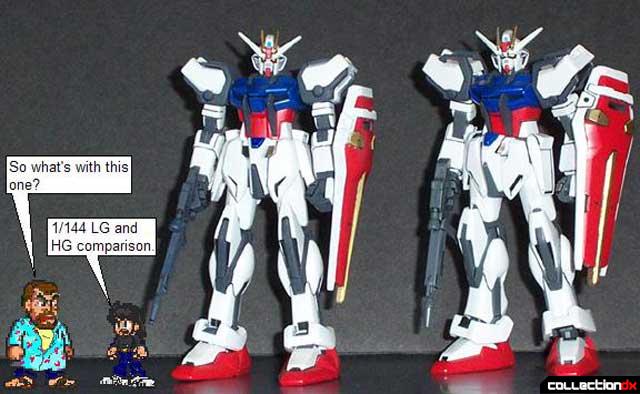 The head of the Strike is something that makes me think back to the days of Gundam W/G/X kits from the mid 90's. With only three pieces: front of the head, back of the head, and the V-crest piece, the construction is extremely simplistic. There's not much in terms of detailing except for the vent blocks and the face. Yep, a Gundam with a need for sewing needles to paint it! The finished product has a downside though of looking a bit crammed. The face is literally squeezed into the mold and the rest of the head seems to be dwarfed by the rest of the body. The HG version of this kit however has more to be done, compliments of HGUC style construction. Also there's the added bonus of more detail. Another note is that the face is not as compact since it's a separate piece built into the completed head. While the head of the LG seems a bit lose from connecting to a ball joint peg on the torso, the head for the HG is connected via a polycap neck piece built into the torso. 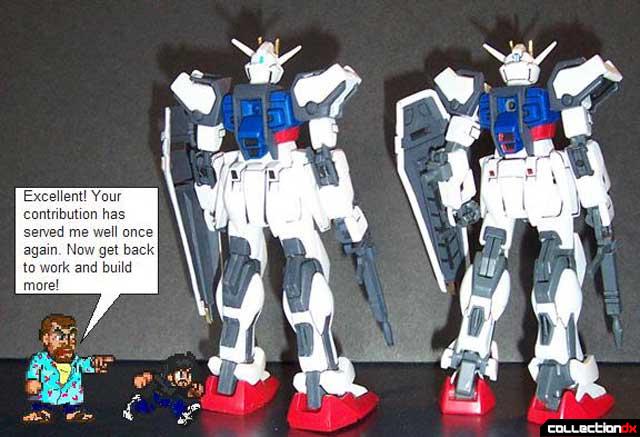 The torso of the LG is almost comparable to the HG version, except the lower torso block in the HG doesn't include the hip connectors. As said, it's pretty simple and more streamlined than the HG versions of the Strike. The torso assembly runs all the way down into the hips with two pieces to make the entire skirt block. Two pieces to make up where the usual kit requires five: rear, sides, front skirts (one piece) and the crotch. The negative factor about this is that with a solid skirt block, leg movement is extremely limited. The upper body however is more to the level of a standard 1/144 with the lower torso being a sub assembly to the upper chest and shoulder area. In the back of the upper body, there is a peg insert to connect the other LG Striker packs and the HG version's Aile Striker pack. Sad to say, because there are more parts in the Aile pack than there are in this entire kit, it falls over pretty easily. As I said, this is where the models are similar. With the torso consisting of the upper half and the lower half, even the HG requires a good bit of paint to look right. The only difference is the hip block is separate and the skirts are articulated.

Since both the arms and legs are piece A and piece B construction I felt would be easier to talk about them at the same time. Like the torso, the appendages are more streamline than the HGs. Without any real joint to them except for the polycap at the shoulder and hip and ankle areas. Since the legs have the feet as separate pieces molded in solid red, the arms have separate shoulder armor molded in the same white plastic. The feet are pretty stiff and since this kit's not much for posing, it's not a problem that they're bottomless. As for the shoulders, they're pretty big for such as a small kit. On the HG, the new generation HGUC construction makes its presence known once again, putting more meat on the Strike's bones. More joints, more parts, and more detail to be done. The arms of the HG have been broadened so the arms aren't smaller than its shoulders, and the hands are separate, interchangeable pieces. The legs of the HG are more worth their weight with their intensified level of articulation. With multiple joints at the ankles and the knees, the HG version can be posed in a more dynamic array of poses. Also note that there are actual soles to these feet as there is more construction to be done.

Since this is a small kit, it's only fitting that the accessory count is minimal, and what would a Gundam be without its shield and beam rifle? As the only extra parts to this kit, they fit onto one of the two runners of the kit as clip and mount pieces. The gun comes molded in the blue used for the torso while the shield is in the solid red from the lower torso and feet. The guns are never a problem (aside from my usual peeve of white bazookas that come in gray), but I found myself fighting the shield. As everybody knows from my past reviews, I hate white paint and this kit is no exception. The shield needs to get its trim painted and same with the gold bars. After a good day of masking and brushing on thin coats, I think it's safe to say this is my most mediocre shield job. Because the HG costs more, you're assured there's more inside the box.

In the HG version of the Strike Gundam, there's the treat of a beam saber, the beam rifle, the shield and the aforementioned Aile Striker pack. While the rifle of the LG might make you think of a Super Deformed kit's gun, the HG needs to be built: gun halves A/B, the barrel and the front grip. The front grip can rotate 180 degrees right to left so the model can be posed holding it with both hands. The shield of the HG is also worth more in my opinion since there's less white work to do, just the detail across the front of the shield needs the work I stressed about on the LG. Another note of the HGUC construction in this component is its connector. As the LG has a peg insert for the arm, the HG has a clamp that connects to the back of the forearm. This clamp allows you to pose the shield in different ways rather than just tacking it onto the side of the arm.

As the first free model I've had, I kind of think its fitting that it'd be one I tried to avoid getting (no offense Josh). I avoided this LG kit having gone through the 1/144 and 1/100 scale HGs of the Strike, but for the sake of comparison I'm glad I built this. Not only that, when I started this review I haven't built anything in six months and I didn't want to make a mess of the MG EX-S Gundam that's been staring at me since last summer that I've been meaning to build.

Good work, you did a good job on this. I recently got an LG SD Destiny Gundam, its awesome..