Oh man do I love this toy.

The Chogokin Panda-Z is like a dream fully realized. When the vinyls were first released in 2003, the first thing everyone said was "These are cool, but where are the die cast?"

Well, here it is.

Panda Z is about 5 inches tall, and made out of die cast and plastic. The head, wings, arms and firing fists are plastic. The rest is all die cast metal. The head swivels and you can place a little pan-taro in the cockpit. Shoulders can swivel out to the sides and have detented joints for forward and back motion. Both fists fire, and the fists can be turned in 2 positions like most classic chogokin.
The chest missile is activated by a small button on the back underneath the jetpack. The button just pushes the missile assembly out, you have to open the missile bay doors. The missile does not fire. 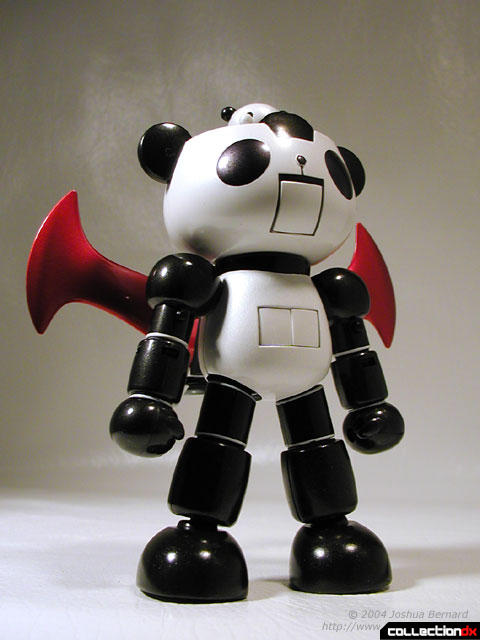 The jet wings are attached to the back by a weak magnet. If you just bump the wings they will fall off. The wings are made of a sturdy plastic, and the metallic red paintjob is stunning.

The legs have a swivel joint at the hips but there is a limited range of motion. The knees are another detented joint, while the feet are on ball joints. The bottom of the feet have amazing molded and painted detail.

So what's not to like about Panda-Z? Well. the toy has a couple of minor flaws. Firstly, the pilot does not stay in his seat. Megahouse could have made him magnetized, or at least put a peg in him to keep him in place. Second, the magnet on the back to hold the wing assembly is not strong enough. I'm also disappointed that the chest missile does not shoot, or even pop out with force. The button placement under the wing is unfortunate. I would have also liked to have seen a wider range of motion in the legs.

Still, Panda-Z fits right in with your classic ST chogokins. If you are a fan of that line, you can't pass this up.