[Note- My lightning, meager as it already is, was misaligned for about half of these pictures. This review was so maddening that I didn't have it in me to retake them.]

The Huckebein series is one of the iconic staples of the Super Robot Wars franchise, succeeding the Gespenst series in the Classic, Alpha and OG timelines. The 008R unit is particularly important to the plot of the Alpha universe, despite never actually making it to deployment. The 'modern' Huckebeins are dark blue in color, and the "Early Color" scheme represents the Huckebein 008 as it appears in its Classic appearances, SRW4 and SRWF.

The Huckebein Mk-I was the first of the Dengeki Hobby FAF line; number 001DX. Later in either 2003 or 2004 (I haven't been able to determine which) Volks rereleased the Huckebein through their own channels with the addition of couple new versions. In addition to the original color scheme they also put out two alternate versions; the light blue "Early Color" and the green Huckebein unit 009.

Most of the FAFs that were released by Volks come in a blue box, which is a quick and and easy visual indicator for the reissues/convention exclusives. The removal of the 'DX' suffix of the Dengeki FAF numbering system is somewhat ironic, as the reissues often included extra accessories not present in the original release. Two comforting stalwarts of the FAF line have been axed though; neither the familiar FAF stand nor fancy color booklet are included, and as far as I can tell these omissions carry over for all of the rereleases. The paperwork has been reduced to a single black and white instruction page. More disconcerting is the removal of the stand, as the bigger FAFs are not remembered for their great standing ability.

Prior to coming back to this line, I didn't own any of the blue boxed FAFs, and from a mostly academic standpoint I was curious if they improved on the flaws of the originals. They absolutely did not. 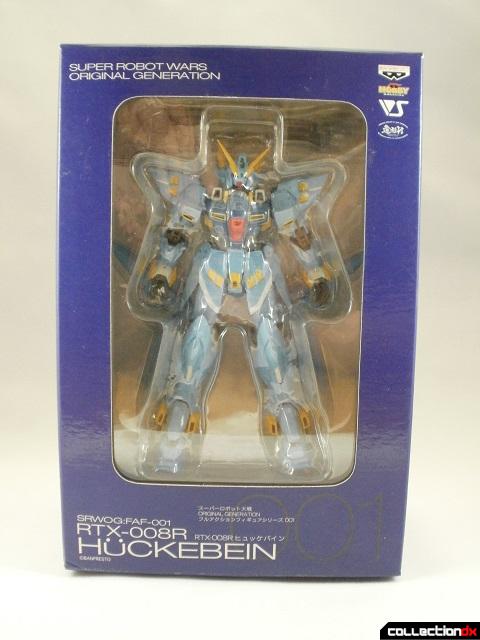 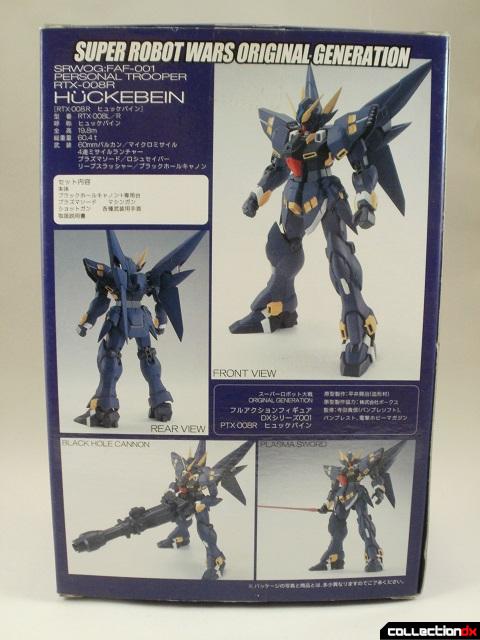 Things start off basically the same, only now you get the blue box and the Volks logo has finally made its appearance on the packaging.

Things started to go wrong for me as soon as I took the figure out of the package. The left arm basically came right off after I had barely applied any pressure on it. The paint on the styrene peg had fused to the inside of the PVC shoulder joint, but more problematic was that the styrene basically crumbled apart. The right shoulder had also fused, and remained firmly stuck even after I went through Poe Ghostal's great write-up for loosening joints. In the end, I went ahead and broke that arm off too. The ball joints on the hip guards were also seized, and the connection to the body is so thin that soon they too pretty much just crumbled off on their own. Here's a fun fact: Because of the Huckebein's troubled development history, the whole line is basically considered to be cursed with bad luck. Anyway, after drilling out the other side of the shoulder connecters, removing the pegs and taking off the paint, and then pretty much slathering plastic weld everywhere, the Huckebein is good enough to go and this review can continue. It's worth noting that by the time this reissue came out Volks had fixed the flaws with the shoulders on subsequent figures, so I feel confident in saying that the reissues are simply that. Here's another fun fact: This isn't the worst instance of a FAF self-destructing on me. 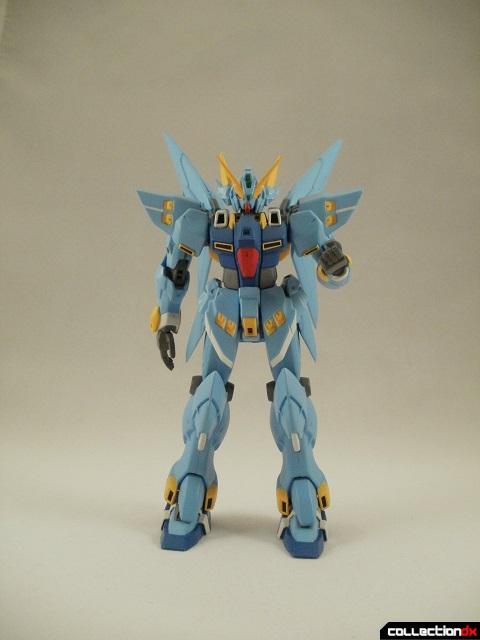 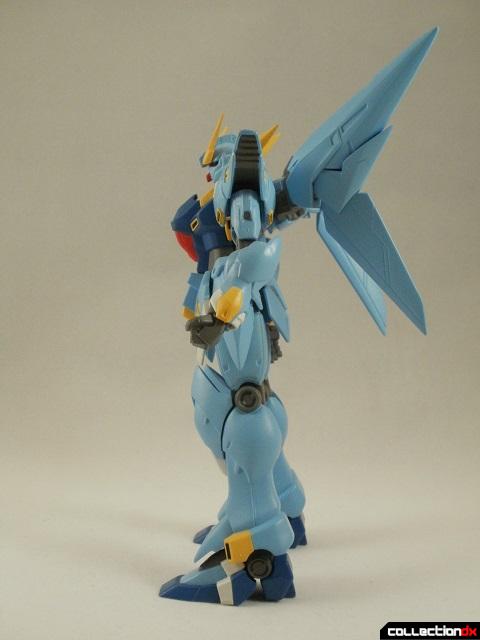 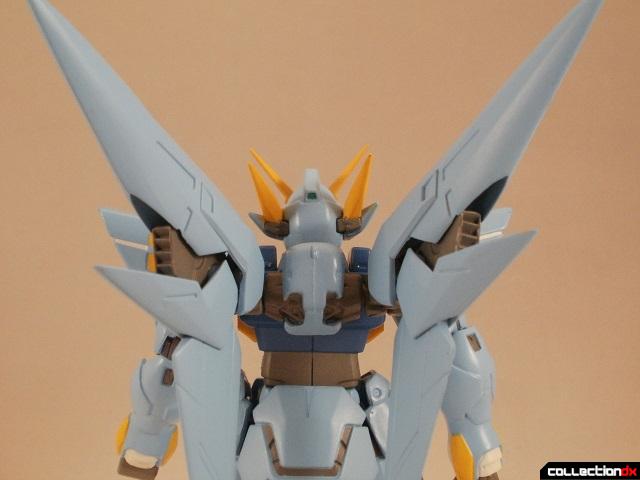 Attach the backpack and the wing binders and the figure is complete. The whole assembly is basically the same sort of arrangement as the shoulders, which is kind of terrifying. Furthermore, the pegs go into the backpack super tightly, and look like they could break off at any moment. The backpack kept falling off throughout the picture taking process because I didn't want to push it all the way on. The binders open up to reveal the boosters inside, and the lower stabilizing fins have a small range of movement. 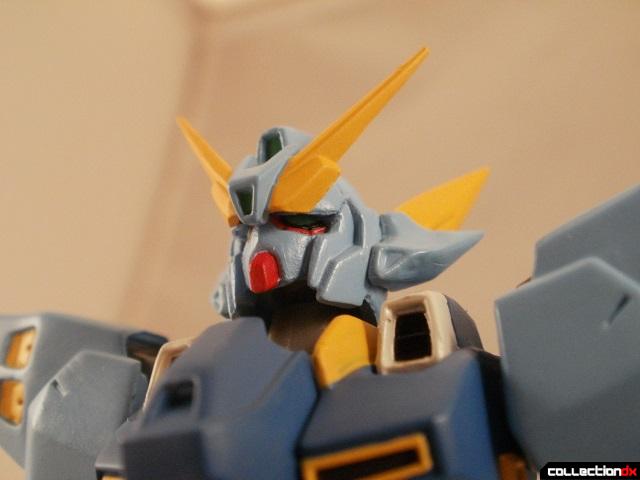 It's pretty much impossible to ignore the Gundam-y resemblance of the Huckebein and its progeny. Hajime Katoki did the designs for the Huckebein series, and they even have those "ears" that he seems to like. 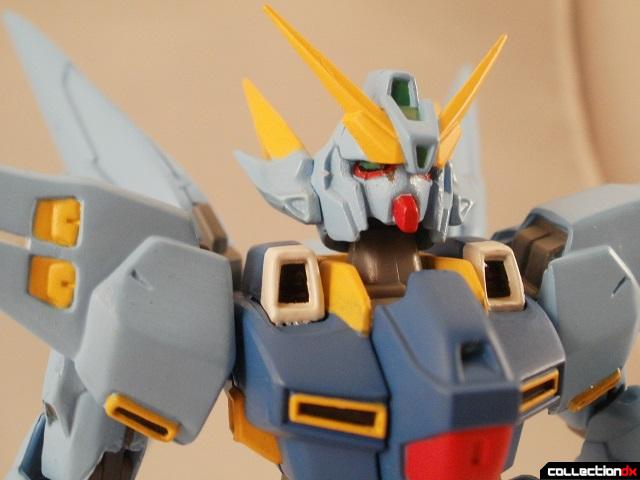 The texture of the paint is fine. It's not slimy, there's no dried out mold release gunk, and it seems like it's applied well enough. It's by no means great, and on close inspection you can see a lot of brush strokes. There is some damage to the face underneath the right eye where it looks like a there was an explosion of red paint and a chunk of plastic was gouged out but in light the of other issues I find myself not really caring. 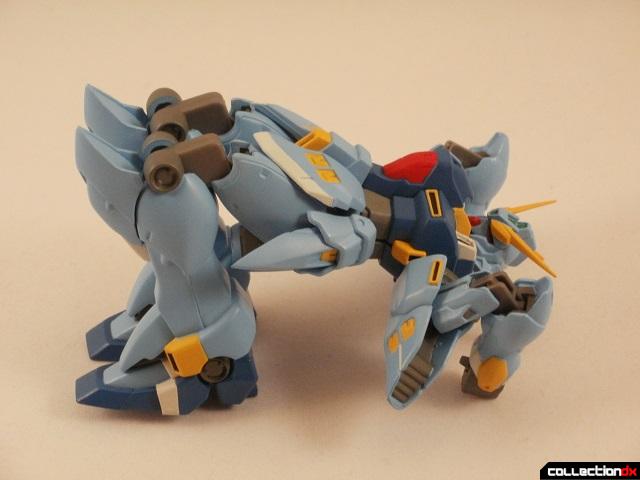 Poseability is a mixed bag. Due to the Huckebein's slender frame, the double joints in the elbows and knees can work unhindered, and the result is a much nicer range of movement than usual. The arms connect to the shoulder on a ball joint, which gives them about 30 degrees of lateral arm movement.

These positives are basically cancelled out by the straight pegs on the shoulders and super limited range of the hip joints, which are restricted both by the ball joint itself as well as the armor. The rear skirt armor is fixed in place, and the front skirt armor is prevented from much movement due to the sculpt. The hip armor is ball-jointed, but so slightly that it doesn't actually provide any extra room for the leg to extend outwards. That's a moot point though, the range of the ball joint on the thigh prevents much outward movement anyway. Oh, and at some point the left hip guard broke off again, so it's taped in place in about half of these pictures. 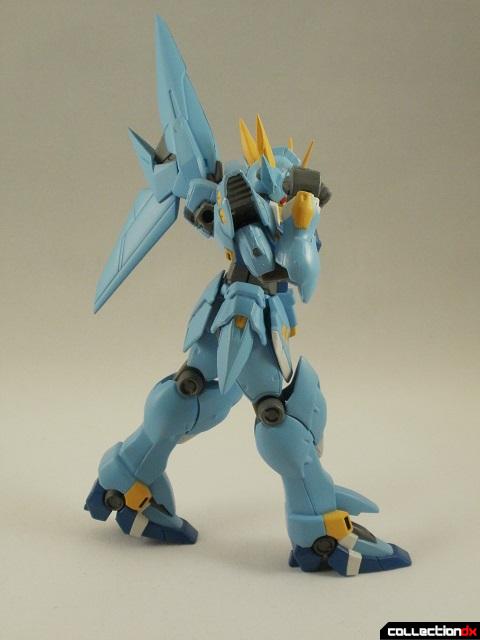 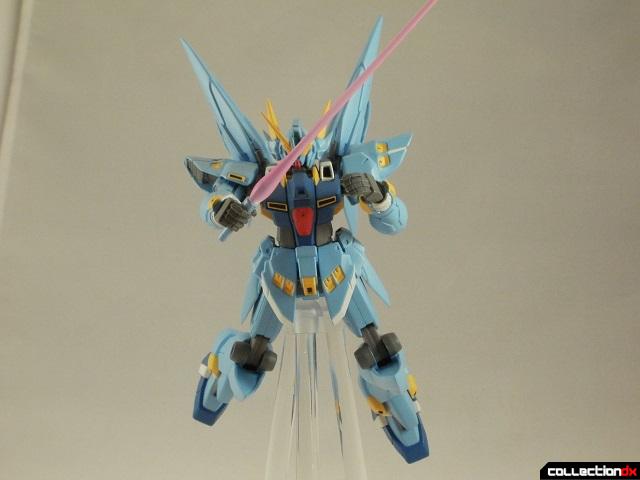 You get two beam saber hilts, one that is molded into a hand and one that stands alone and can't be used for anything. The blade needs to be swapped between the two. 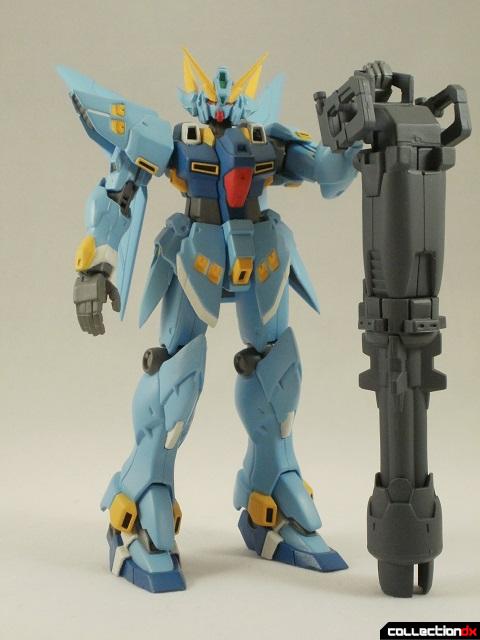 As the BHC is just about as tall as the Huckebein, a little stand to hold it up is included. The hands used for holding the gun only very loosely fit over the grips, the gun is completely held up by the stand. 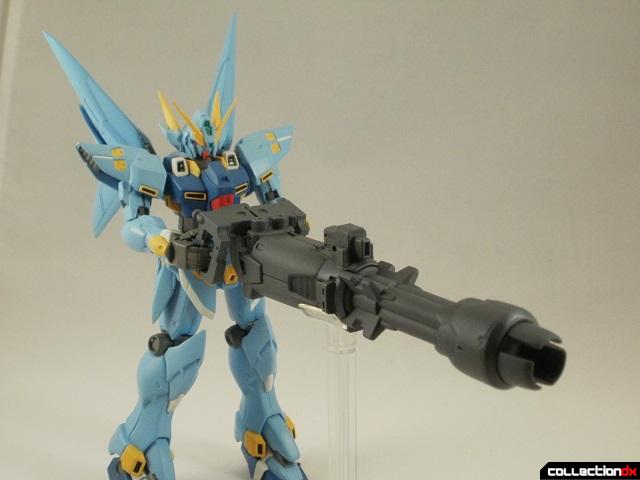 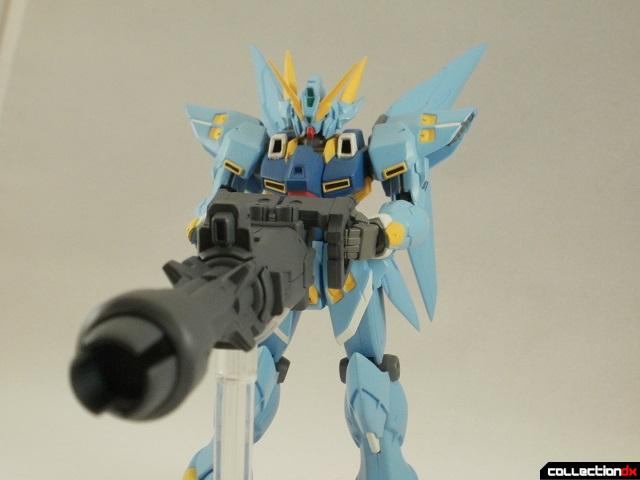 Even if one of the weapons is a massive cannon that launches exactly what it says in its name, that's not a lot for accessories, and the reissue throws in a couple more. One of the big system changes in the OG series was the ability to rearrange your units' loadouts, and the reissue included two weapons unique to those games, the M13 Shotgun and the M950 Machinegun, as well as an open left hand designed to cradle the shotgun. Because the guns are permanently attached to a right hand there's no option for dual wielding. 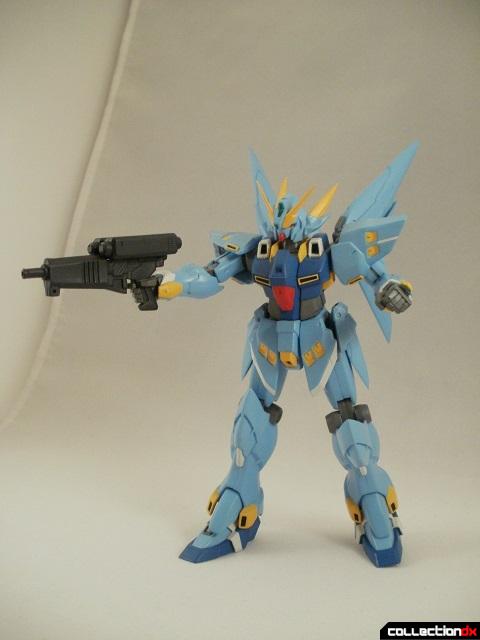 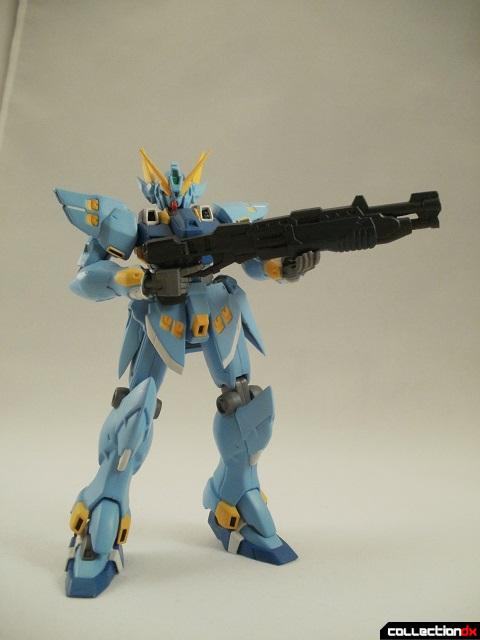 The shotgun is a little too long to be able to use both hands, I had to cheat a little bit to get this pose, and even then it was really hard to get right. 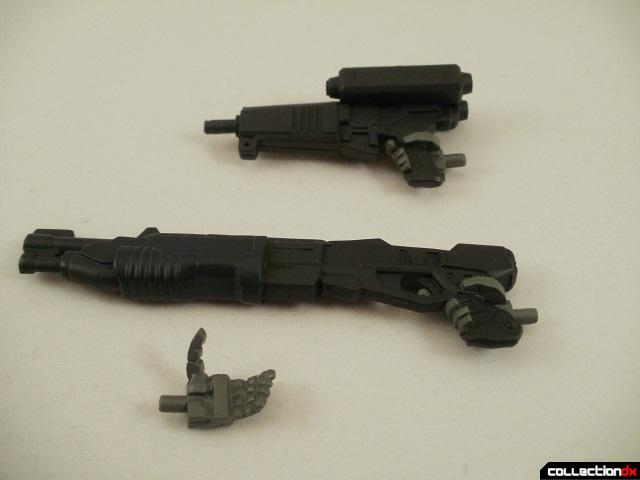 These guns look nice but are really rubbery, and bend really easily.

The Huckebein isn't too expensive, but it's a little harder to find on the aftermarket, and in particular the alternate colors don't show up too often. I was really looking forward to getting this, and ended up pretty much disappointed all around, although most of that came from having a semi-rare figure fall apart in my hands. Due to my worries about the repaired shoulders and wing binders breaking and anything else, I'm not even confident enough to leave it out as a display piece. 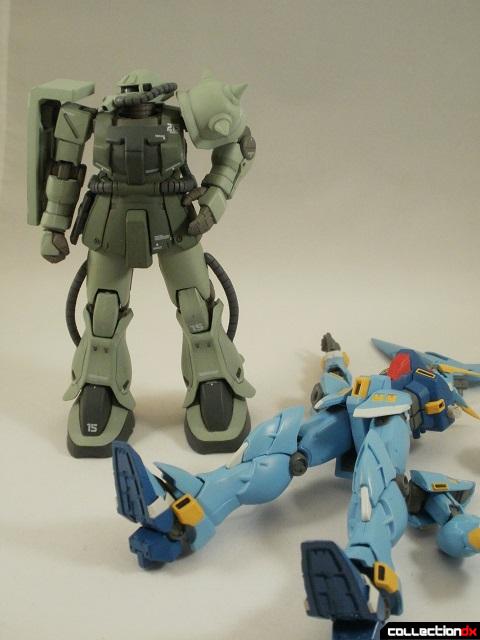 I said this in my first review, but it's been a while and I feel like a reminder is in order: I do not recommend these toys to anybody.

Next time: TBD. The current shortlist consists of the R-Blade, Werkbau, or a pair of Guarlions.

6 comments posted
I love these reviews of these

I love these reviews of these horrible, horrible toys of yours. They remind me of myself as a young mecha fan blindly buying up things on ebay I thought were cool and realizing only after I got them in hand how terrible they actually were. I should review my old kaiyodo virtual on figures one of these days!

Hahaha, thank you very much, that's pretty much the ultimate compliment. I'll be able to keep this awful train going for a while, so I'm glad at least one person's looking forward to them.

I wish I could say when I was a "young" mecha fan. Unfortunately horrible toys are something we are all destined to relive over and over again. As reference please see Josh's CM Grendizer review.

I really enjoy these reviews as I'd seen these toys on dozens of Japanese websites over the years and could never find any in depth information about them. It's also just fun to see more of stuff by Volks because they are such a fascinatingly weird company.

So much potential, all of it wasted...

at least for the most part, these toys have had a Kotobukiya Model kit release, which while THOSE aren't great either, they're better than these...

but stuff like Valsione-R? KoRyuOh? R-3 Powered? your only option is Volks and it annoys me so.

The Valsione R is pretty weird. It has a lot of the same issues, but at the same time makes some changes that go a long way to improving the line. Changes that as far as I can tell were dropped for the figures that followed. At any rate, the R makes me pretty happy, which is a lot more than this pile can say for itself.

I might postpone that review until I can find my vanilla Valsione though.