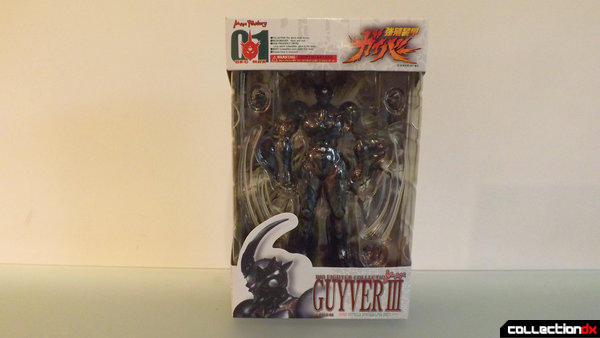 Created in 1985 by Yoshiki Takaya, The Guyver is an ongoing manga series written over nearly 30 years, Although the timeline in the manga is around 3-4 years. The Guyver franchise has had 2 animated series`, a 12 episode series that ran from 1989-1992, roughly based on the first 4 volumes, and in 2005 a 26 episode series based on the first 10 chapters and is alot more faithful to the manga than the 12 episode series. The Franchise has also had an animated feature film titled "Guyver: Out of Control" in 1986 and two live action American films, "The Guyver" released in 1991 and "Guyver: Dark Hero" in 1994 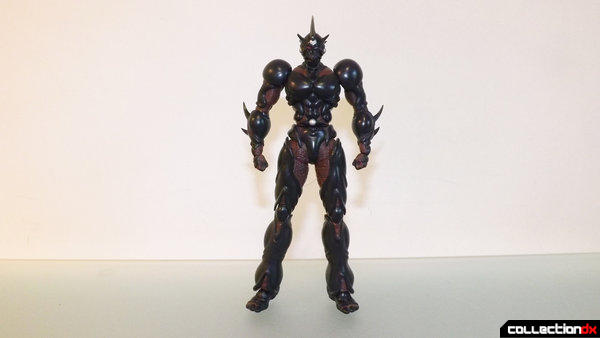 The Guyver units are techno-organic devices that attach to a host and gives them super human abilities and weapons. Originally there were three Guyver units, the third unit was found and activated by Agito Makashima, the adopted son of the then CEO of the villianous Chronos Japan, Genzo Makashima. Agito is a third year high school student whose true motivation has been shrouded in mystery for much of the series. Agito quickly joined Sho Fukamachi in his fight against Chronos, Agito has refered to himself as "Zeus" with his aim of overthrowing Chronos (Zeus` father in Greek Mythology) and stealing their power. 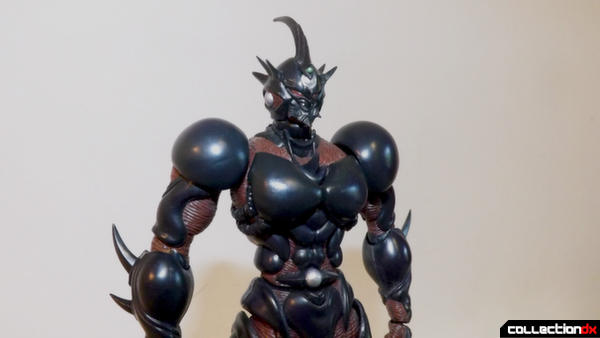 Guyver 3 stands at 8 inches tall and has 38 points of articulation. Double joints at the elbows and knees makes it capable of replicating poses directly from the animation or manga. The head is on a ball joint and can get a really good range of motion, the biceps have swivel joints and the wrists are on ball jointed pegs.
The feet have a ball joint, there is also a hinge joint that allows the toes to point up or down. The figure has a great paint job, it has a touch of dark purple which is faithful to the look of the character in the series. 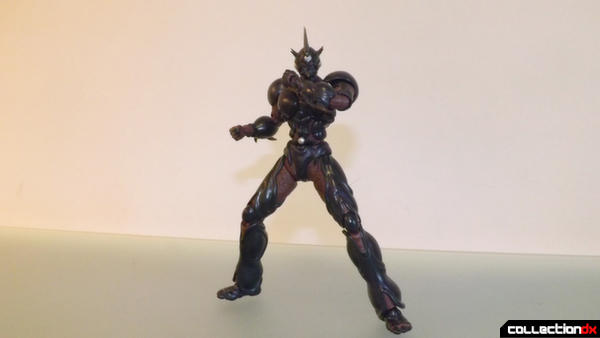 For accessories Guyver 3 comes with a standard display stand for the series that clips around the waist of the figure allowing for action and flight/jumping poses. There are 3 sets of hands for the figure, a closed fist set, an open palm set and a set that allow the figure to hold open the chest panels to reveal the Mega Smasher weapon. 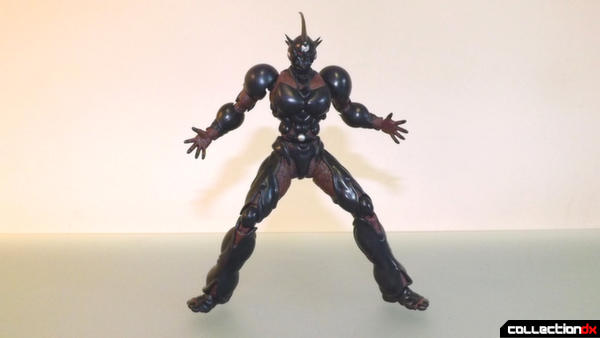 Guyver 3 is unique in that it is the only Guyver that has two High Frequency Swords located on his forearms.
In the series when in normal mode the blades are small, when activated they both extend out and are able to cut almost anything. The blades that came with my figure are from the first production run and these blades are supposed to glow in the dark, though I've yet to get this feature to work. The second production run had the black painted blades that didn't glow in the dark, subsequently this first production run figure is rarer
and can be hard to find. 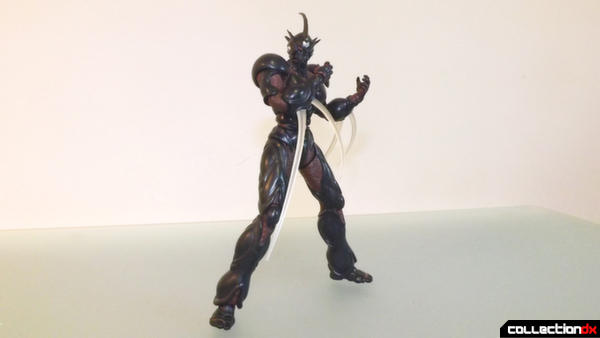 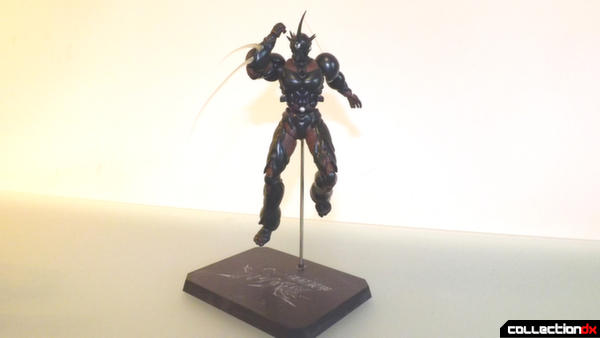 Guyver 3`s most powerful weapon is the Mega-Smasher, a destructive double beam that is located behind the chest panels. When used, the Mega-Smasher can completely destroy most enemies, buildings, and environments, but It takes alot of energy to fire the Mega-Smashers, so the Guyvers can only use them once in a battle. 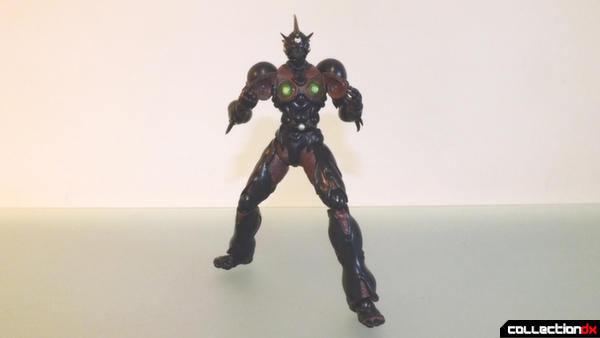 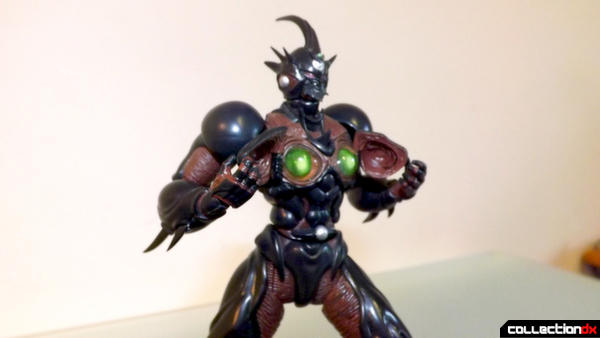 The figures can be fragile, with pegs for the hands and High Frequency Swords breaking if too much force is applied. These days it can be hard to find figures in this series and the often go for around $200 or more on ebay. 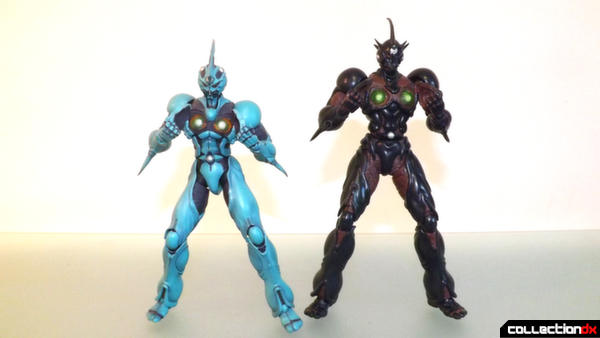 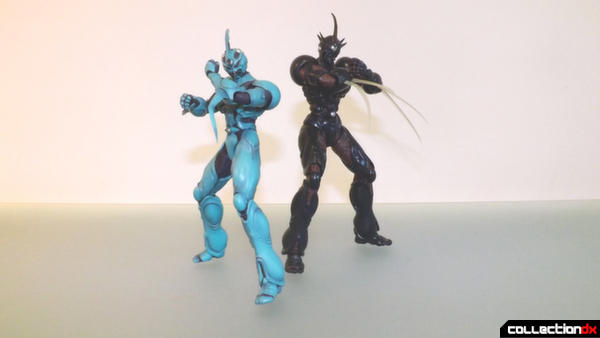 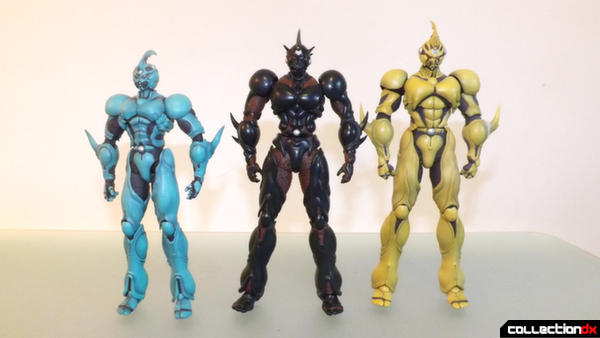 im going to be reviewing all the figures in this line, except guyver 1 as Josh B already reviewed it.

Awesome! I can't wait. I also can't wait for the Figma Guyver.

i hadnt heard of the figma one until i just googled it.

it looks ok, the top of the leg armor is odd, i guess they sacrificed the look for posability.

however, if they do more characters that arent in the BFC line, ill be all over that like a dog on heat

any idea how big the figma guyver is?

Figmas are usually a little under 6 inches. But yeah, I'm just excited to have a Guyver figure that won't cost me a bajillion dollars.

Great review.
I miss this series, even though I have the DVDs and the Guyver 1 in its box after all these years.

Guyver is one of the first Animes I recall see'ing, and one of the most violent lol. Still holds a place in my mostly giant robot loving heart.