The latest addition to my growing collection of Gundam models is the main mecha of the Gundam SEED side story, 'Astray' which gets its name from this wayward mobile suit. As the first 1/100 scale installment of the popular Gundam SEED MSV (Mobile Suit Variations), the MBF-P02 Gundam Astray Red frame is a sensational design. 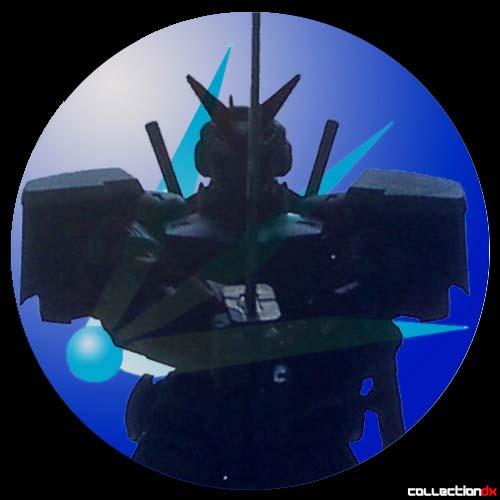 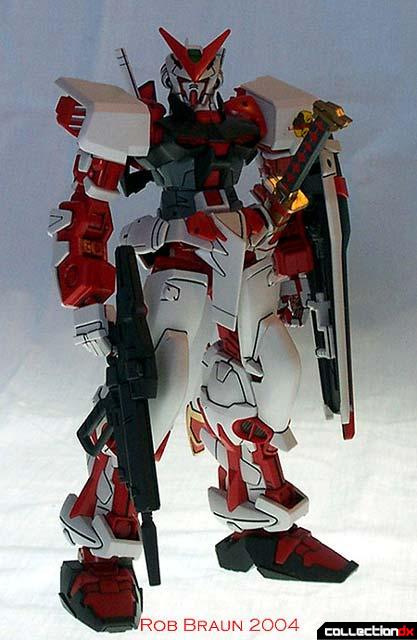 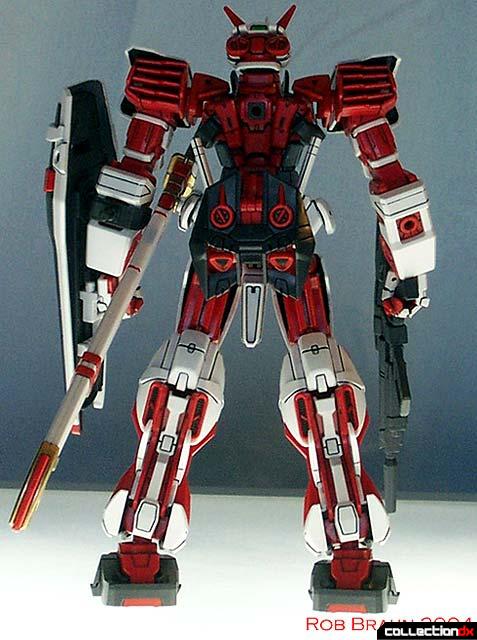 To the novice fans, while the events of the Gundam SEED TV series went on, another story was following along at the same time, and this is what makes it a "Side Story." The story of the Astray series picks up only hours (or days, I'm not sure) after the destruction of the Heliopolis colony. The first part of the story follows Junk Guild member Lowe Gule and the Red Frame while the second half follows Serpent's Tail mercenary Gai Murakumo and the Blue Frame. Long story short, in the rubble of the colony, Lowe discovers the Astrays, Red Frame and Blue Frame and the remnants of Gold Frame (its arm). For further reading I suggest picking up the comics, released by Tokyopop. viking rings 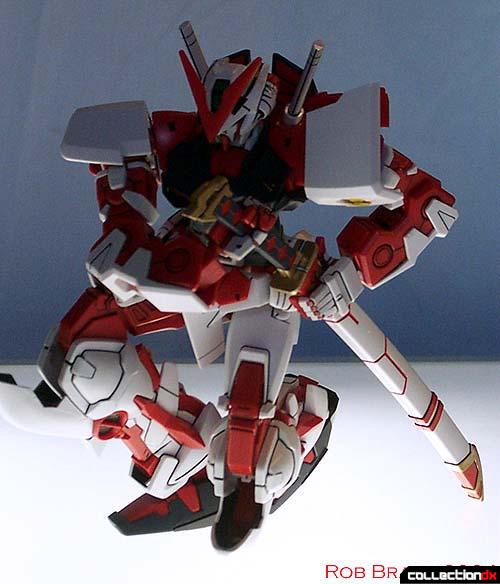 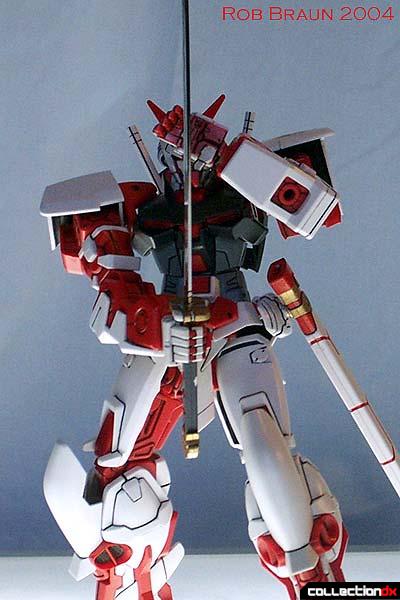 As for the model, while the US only has the recently released 1/144 LG version like my previously reviewed LG 1/144 Strike Gundam and the MSIA version, this Astray is available via import in both the 1/144 HG and the 1/100 scale which is seen here. 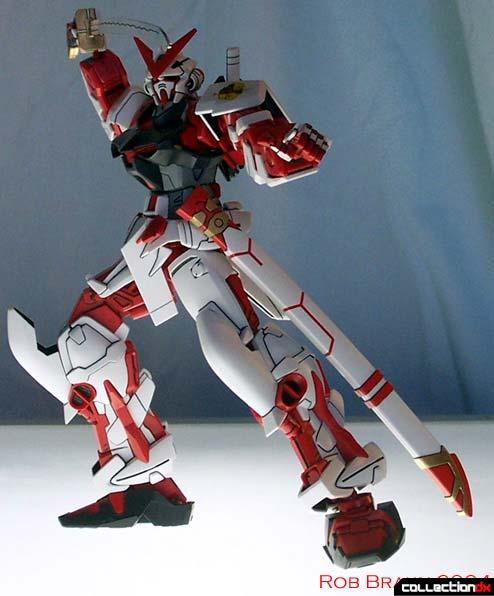 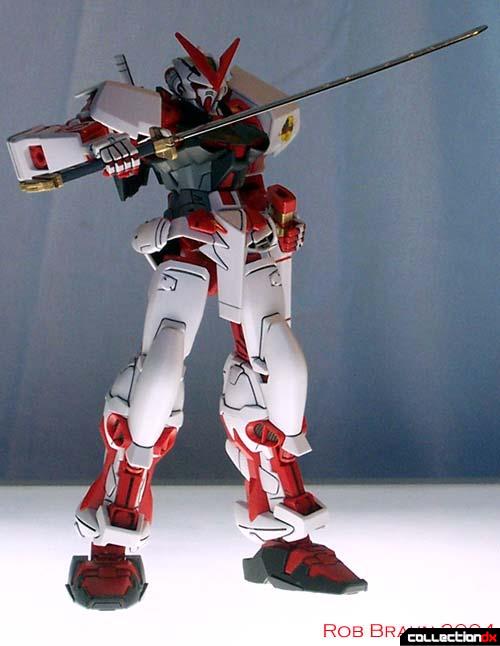 The 1/100 scale Red-Frame is molded in very high quality plastic and all visible components of the Red Frame's design are molded into their colors so there's relatively no painting required. The only parts that really need paint to look good are the knuckles on the hands and the eye piece. That piece was essentially the second hardest part to paint. Almost all of the SEED kits in 1/100 scale have followed the Master Grades with clear plastic eye pieces that look good painted from the back. However the Astray's eyes are compacted onto one piece that covers the large sensor eyes and the standard Gundam eyes so it was a trick to get the clear look while painting on the outside. More over the accessories of the Red-Frame require more paint work. Construction of this machine is well done and the finished product is very solid. A few new perks have been added into the construction due to the Red Frames more mechanical design.

It would be a crime to call the torso on this model a block because that's the last thing it is. The waist connects to the hips via a ball joint and the torso is segmented by an abdominal joint. The shoulder component is connected in a downward hinge so there is more than just forward and backwards motion to the arm, but added up and down movement as well. The hips lack the blockish skirts which are notorious for limiting leg movement. The legs are blessed with improved articulation that allow the knees to bend back to nearly 180 degrees and there is an added polycap joint in the foot for an added ankle and toe arch for even more freedom. The arms are also gifted with improved articulation with new elbow and wrist joints that give the arms as much freedom as the legs. The backpack of the Astray is nicely constructed on an arm mechanism that brings it down from between the shoulders to the hips. Why this can be done is simply for the addition of extra weapon packs, as seen in the B-Club kit for the 1/144 HG Astray Blue Frame. I just hope Bandai's looking to expand on the Red Frame's 1/100 components.

Accessories in this package come standard with any Gundam. There are the two generic beam sabers. Unlike previous incarnations that are normally round or square cut, the Astray's are more oval shaped. The beams themselves use the recent Star Wars toys as an example and are no longer the clean cut tubes of clear plastic, but are more of a burst of energy. While they look good they do not fit so well into the hands as they normally have on other kits. The Red Frame also comes with the SEED standard (design) shield. While the front matches the same pattern of the 1/100 scale HG Strike and Duel versions, the back of the shield has some modifications to it. The polycap's window (to the arm bracket) is more open cut so the shield can have more movement while strapped on the arm. Also the handle grip was altered so it can sit flat against the shield. Another variant weapon of the Red Frame is the beam rifle. While it's not a copy of another weapon it is by far the more streamlined gun of the Seed serial. The final piece of the Red Frame's arsenal is the'Gerbera Straight.' This by far is the more strenuous of the parts to be painted. While the blade is done in electrostatic chrome, the hilt and sheath are molded in solid white plastic that require a serious application of gold and red. The grip and pummel are also done in white plastic so painting is a definite to get the kit done right. When finished, the sword is a real sight to behold. Last but not least, The Red Frame comes complete with the 1/20 scale figure of the pilot, Lowe Gule (translated Lowe Gear, kind of appropriate if you think about it). This figure comes with its own accessory of Lowe's AI companion, "Number 8." Also note, the figure is molded in his comic wardrobe while on the sides of the box he's shown in an animated form wearing an alternate costume. This figure variant is included with the 1/100 scale Astray Blue Frame (along with the figure for its respective pilot, Gai Murakumo).

Overall, the SEED MSVs are off to a good start. I've always been a fan of the SEED 1/100 scale line and the Astray design. Looking at it I almost feel nostalgic of another Anti-Gundam design known as the Turn-A. This kit and its sibling suit the Blue Frame (out now in its upgraded form, which I don't own as of yet) are truly great additions for the growing collection of SEED related models.

Go astray and get Astray.