History of the Gold Frame

In the ruins of the factory on Heliopolis, a junk guild worker named Lowe Gear found two lost Mobile Suits, the MBF P-02 and P-03 Astrays Red Frame, and Blue Frame. With them, he found the arm to a third unit, the MBF P-01 Gold Frame. While the other two units were claimed, the Gold Frame was thought to be lost until it appeared (missing its right arm) under the control of a Coordinator named Rondo Gina, looking to destroy Lowe and the Red Frame. After a brief confrontation in space, the Gold Frame was severely damaged; its head destroyed and armor scarred where it was returned to Orb for modifications and repairs. Its right arm however remained with Lowe and was used to replace the arm of the Red Frame after the encounter between both frames. This sums up the history of the Gold Frame in its basic form. 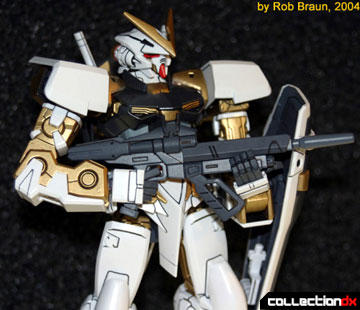 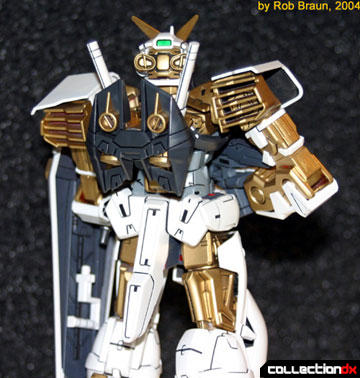 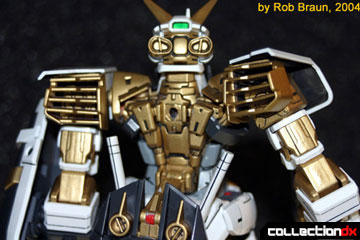 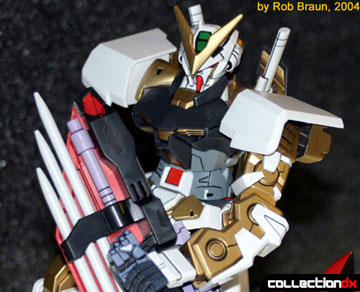 After SEED's debut, one of the Japanese hobby magazines released a 1/144 version of the standard Red/Blue Frame low grade kit remolded with electrostatic chrome parts to make its 'exclusive' Gold Frame. Until recently though it was the only Gold Frame model I knew about until I discovered an 'exhibition' release for the 2004 International Character and Hobby show in 1/100 scale (Red frame remold, similar to the 'Hyper Mode' variant God Gundam), but since I was unable to obtain one, I made my own. For the most part, it was something I had planned on doing anyway.

The Gold Frame project is something I've been planning for a short while now since my completion of the Red Frame. While I could have spent the past few weeks finishing the Meteor, I decided to shelf that for a while so I can do it. I also used this project as part of my final photography class assignment. For the record, I used my existing Red Frame model rather than buying another Red Frame.

No real modifications were done to the model aside from the change in color and filling in the seams with 'Zap-cap' a form of gap filling glue. For the main body work I used Tamiya Spray on Primer and two cans of Tamiya Gold spray. Other color modifications include the hands and rifle. While the hands of the Gold Frame should be like its name implied, I ran out of the proper color. So as an end result, I used my brush on Testors Model Master Acrylic "Engine Blue" (or Gray depending on the label). Since that was the pre existing color I used on the rifle when I originally built the Red Frame, I made the choice to then modify the gun's color. I went with a two tone scheme for the gun and used another MMA color called 'Gunship Gray' which is lighter than Engine Gray.

The end result of thin coats though show a minute change, but it does enough to show a separation between parts. Sadly while the kit is visually done the way I wanted, I am missing a few components to really improve the 'character' of the Gold Frame. Although, I do have a Blitz Gundam in the same scale...