After Bandai's successful release of the MBF-P02 Red Frame in the 1/100 scale, they decided it was time that its sibling unit, the Blue Frame got the same treatment. However unlike its simplistic sibling, they went with the upgraded form; The Second L. 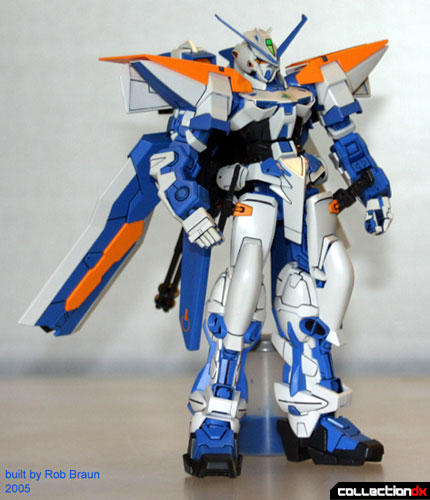 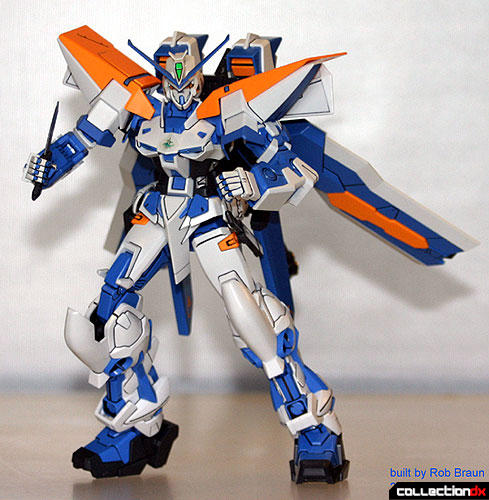 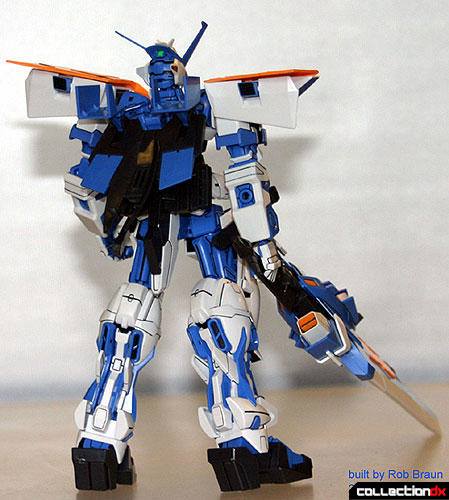 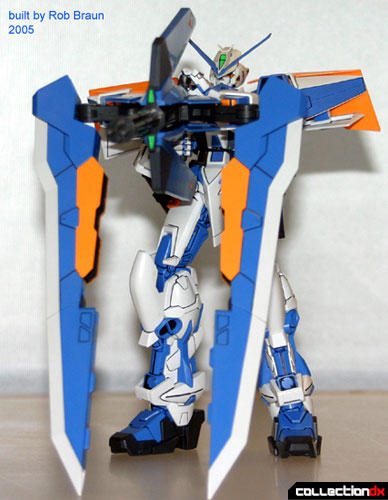 The standard of Gundam mechanics is the upgrade. This ranged from scrapping the main mobile suit for a better one; ala Shining Gundam for God Gundam (Mobile Fighter G Gundam) to upgrading the existing mobile suit such as the case of the Blue Frame. In the story of the comics, the Astray Blue Frame was taken by Serpents Tail mercenary Gai Murakumo shortly after its discovery by Lowe Gear (pilot of the Red Frame). Along the course of the story, he outfitted it with an array of weapons of his choice which were vital to his missions. This included a series of weapon units like its artillery packs (seen in volume 1 of the comic and released in 1/144 scale by B-Club) and its 'Scale system' for underwater combat (used in volume 3). While the events that caused it go unseen or read in the domestic ASTRAY comics, the Blue Frame received its 'SECOND' upgrade in its own chapter in the SEED MSV universe. While its previous weapon packs were temporary modifications, the weapon units of the Second were more permanent, interchangeable modules, hence this model's name 'Second L' which comes from the Tactical Arms weapon pack designed by Lowe Gear (L). 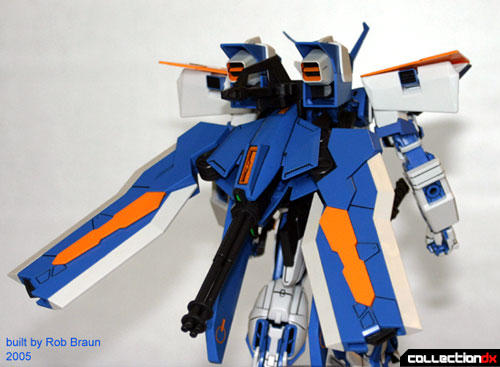 The parts come molded in the final colors: white, cobalt blue, orange, dark grey and (thick ABS) 'joint' gray. Construction of the kit I can say is made up 70% of the Red Frame and 30% upgrades. The major changes for the kit include: the head, shoulders, feet and back unit (which is a whole kit unto itself). The head is very open cut, plate siding with a flat top and broad 'V-crest'. There's more assembly work here than in the first Astray. Since this head has a different form, its eye piece is molded separately; sonar eye up top is molded in the white plastic with the Gundam eyes molded in a strip of clear plastic. It was a lot easier than in the long run, but the test of the head was the painting. The nose are needs to be orange and the top of the head needs pin striping on the under side. For me it wasn't about how to paint but getting the right colors. The Testors paints I use are malleable enough that mixing was no problem: some 2 parts cobalt blue with flat white will match up with the blue plastic and some insignia yellow with a light drop or two of orange (label got pealed off the last time I floated the bottle) will get the right color needed for the face.

The limbs and torso are the same exact construction as the Red Frame, with the only difference being the color scheme of the torso from the dark grey to a solid white chest. Also noted are the changes in the design for the back's support arm: two pieces with a half-polycap-half construction that is static for the purpose of holding the Tactical Arms pack. Additional constructions in the limbs for the Blue Frame specifically are the shoulder armor and feet. Unlike the first Astray, the Second sports flared shoulders which have a fair amount of work to be done; construction and painting. Paint wise they need the cobalt treatment and assembling has three stages: the bicep armor, the outer shell and top piece (the orange plates) and the back plate. The finished pieces are solid, but since they just fit over the shoulder peg, they have a rotation weakness. This means if you try to rotate the arms in a specific way you have a chance of popping off the armor. Breakage is not a problem if you're careful. The legs also come sporting some additional changes, such as new feet, an ankle cuff and two knives with sheaths that are clipped onto the upper thighs. The feet are high heeled, bigger than the original Astray and other SEED related Gundams which are notoriously flat footed. Inside the toes are extending blades, which sad to say aren't as impressive in plastic as it is in print. The ankle cuffs added in do not add any real height to the model but instead mask the ankle joint which is open on the previous Red Frame. The legs and arms still retain their greatness from the Red Frame but also sport some feint modifications. This is primarily to reduce friction and breakage in the joints. 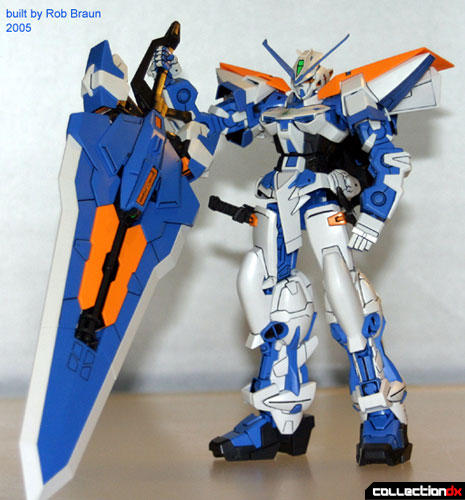 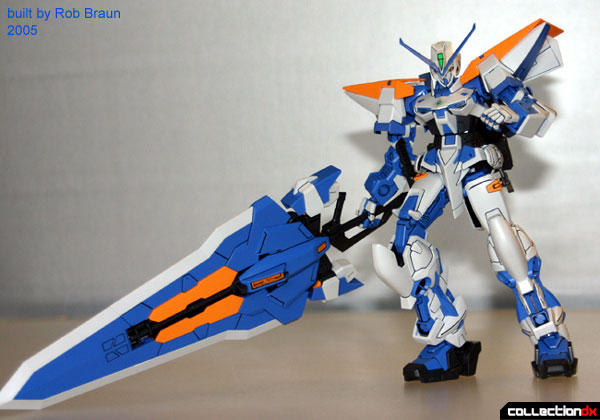 The Tactical Arms is the real gem of the kit. It functions as a flight unit, a gatling gun, and a massive anti-ship sword! I can say that the only amount of painting I had to do here was detail work but every major piece of the TA
was done in its final colors. Construction is beautiful with its gatling gun barrels being a series of pieces as compared to one solid 'chunk' barrel piece to make a very open gun. In flight mode, the pack is docked on the bay unit which takes the place of the Astray's original backpack. The sword blades are folded down so that they don't scrape the ground and the thrusters are rested into sleeves that match seamlessly with the dock unit. The one problem here is that this causes a weight problem and makes the model off balance, back heavy in a straight stance. Posing it will reduce this problem slightly. With the pack off in Gatling mode, the two pods that hang off the back skirt are docked on the top and bottom of the unit. The blade arms fold down and work as a bipod. Since it doesn't stand on its own, the Blue Frame is needed to hold it. It's very solid and it compliments the model perfectly. In sword form, the TA is massive, towering over the kit and with the amount of inner assembly, very difficult to pose with. It's a weight issue more than anything, but it still can be held, posing it with both hands is tough but it can be done.

Overall, the Blue Frame Second is a nice build. As a fan of the Astrays and SEED MSVs, I had a lot of fun working on this one and intend to do so again when I get the Red edition (limited edition C3 version).