"Cool." I said that about 3 times as I was freeing the shiny, silver figure from its Styrofoam compartment. Evangelion Unit 04 had a good weighty feel to it and was cold to the touch, like an instrument of war. And like an instrument of war, it was strangely grotesque, yet utterly beautiful. I couldn't help but admire it. Eva 04 looked right back at me, its mouth hanging open with a sinister snarl. Bandai has done it again, by putting a unique twist on something familiar and making another must-own piece for toy collectors. 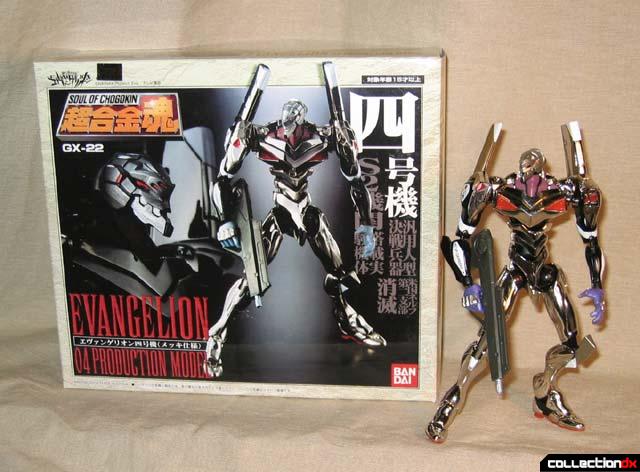 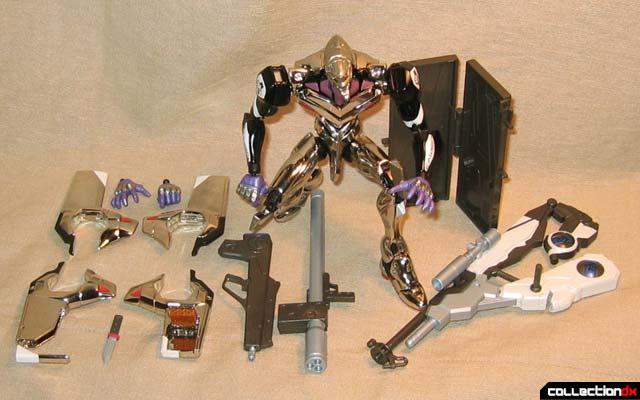 Those who already own the sleek metallic-black Eva 03 or any of the other Evas, will know what to expect from the Eva 04 figure itself. Other than color, this is the EXACT same figure as Eva 03, down to the head mould, with the same high level of poseability and quality. With numerous points of articulation throughout the entire figure, you can see what wonderful poses can be achieved with this figure. 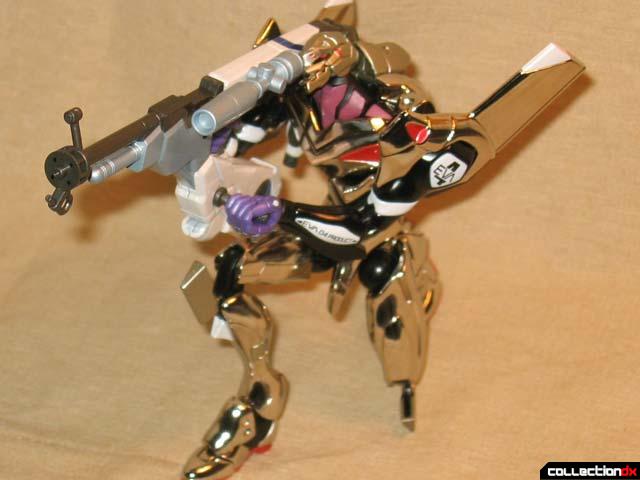 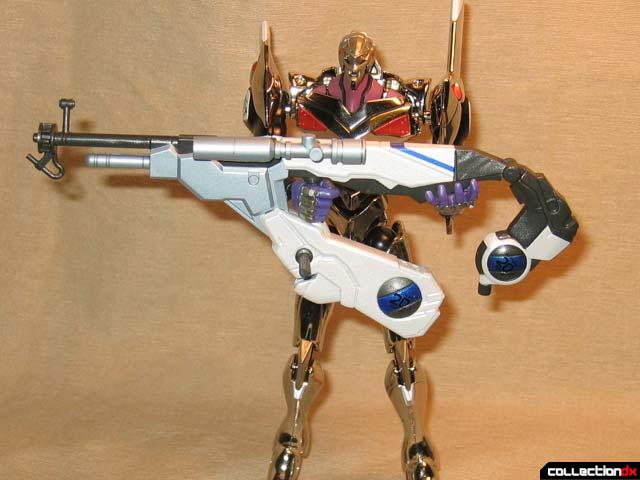 The Eva 04 is strikingly shiny, shinier than even the reflective GX-06M Getter Robo. Its polished silver surface just gleams, and is its biggest gimmick. Punctuated with small eye-catching splashes of red, purple, and black, it is pure eye candy that you will never tire of admiring.

The figure also comes with the following accessories: 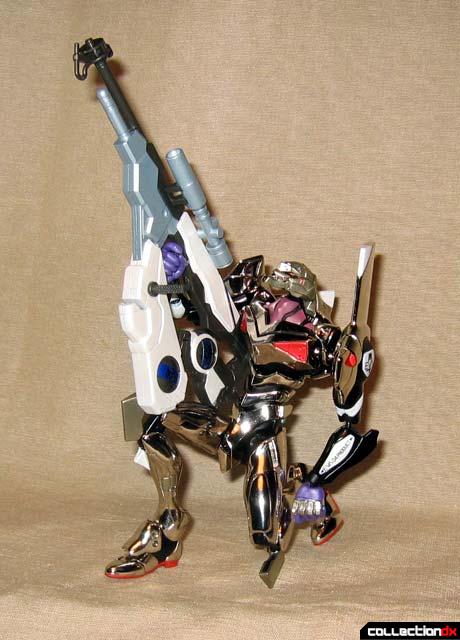 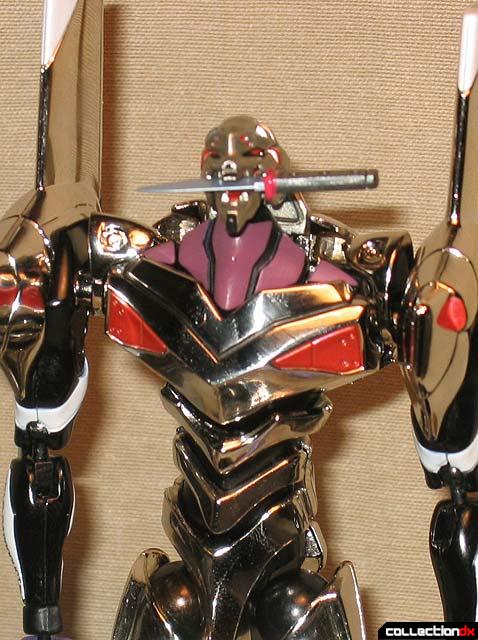 There really isn't a lot to pick about this piece. For me, the biggest disappointment was the weak selection of weapons it came with. With hardly any melee weapons and its bulky guns, this is arguably the worst equipped Eva ever. Of course, we never see this Eva pick up a weapon in the anime (or even ever appear for that matter), but it still would have been nice to see a shotgun or even a sword. Other very minor gripes include the plastic silver head (not shiny, but still okay) and the rather generic display stand, which was really neat the first time around with Eva Unit 01, but not now for the sixth time. Finally, it is yet another Eva with a different color scheme and weapon arsenal. There's nothing too original or innovative here.

Still, without a doubt, Eva 04, with its shiny splendor, is really a treasure worth owning, despite being slightly more expensive than the other Evas. It is a snarling, beautiful, piece of art that can stand on its own, or together with its fellow Evas. Who needs gold (or purple, red, blue, yellow, and black) when you've got cool silver?

What do you think was one of the things which drew me to Unit-04 when I was choosing a username for myself online...? :D

I was almost going to say something about this as well, but I figured I'd leave it to you :D

By the way, I almost bought one of these quite recently, but it was just out of my price range and I went for Unit 03 instead. So my only figure that shares in your name is the Revoltech, which came practically broken in the box, sadly...

I've been thinking about going after the 026 and the special version for a while. The other Revoltech EVAs I have ("Rebuild" Units 01 and 00, and Unit 01 with that armor you don't like...ha) are great, and I would enjoy Unit-04 as well if it weren't for poor quality control. Because it is hardly any fun to play with, I call it "Unit Poor" or, instead of Yongouki, "YAWNgouki", heh.

I am hoping for more SPEC EVAs as well. I ordered the XS-09 a while back and should have it later today (it's 1:36 AM, else I'd say "tomorrow"). If it makes a good enough impression, I'm certainly going after more.

So, while I have your attention (heh!), did you ever get my email?

"So, while I have your attention (heh!), did you ever get my email?"

Ah- that's a neg, G-I. I was actually about to ask you the same thing!

About to ask me the same thing? No, I don't have any emails from you...I remember after the first email I sent you, I looked in my settings, and saw that I had apparently set it so I couldn't receive emails from other members. So I changed that and then sent another email to be sure.

East Coast USA, pretty good call! I'm here in Northeast Ohio, which for some reason seems to always get new Transformers toys several weeks after everyone else...

Well- my username is two things, really... I started an [incomplete] fanfic of "Evangelion" many years ago (which I think I still have) before I began writing here at CDX.

In it, I introduced a new character who was the pilot of Evangelion Unit-04. (Since official materials never specified that Unit-04 had a pilot to begin with, I could just take that, and run with it...) It would have been an alternate take on the series, almost-exclusively from his point of view, but would otherwise have followed the events of the TV series very closely (with the exception of a handful of new Angels I made for the story).

The long and short of it was that this pilot was in the cockpit when Unit-04 "exploded" in Nevada. This explosion, it would turn out, would transport Unit-04 & its pilot back in time to just as the 3rd Angel was making landfall in Japan. After the destruction of the Angel, NERV (and thus, Seele) were stuck with the problem of now-two Unit-04s- one still under construction in Nevada at the time, and this new one. And so to prevent confusion, the time-traveling EVA was designated -04/A, and it and its pilot added to the combat duty roster in Tokyo-3.
The "-A" was also a vague tip-of-the-hat to the U.S.S. Enterprise-A because I was deep in "Star Trek" at the time.

For standard weapons, I kept the Progressive Knife Mk.1 in the left utility wing, but I put a Pellet Handgun in the right wing, which could extend, retract, and reload automatically via an internal hydraulic framework.
It would also have been superior to all of the other EVAs, in that it had far better control over its AT Field because its pilot always had a minimum 100% synch-ratio each time he Activated Unit-04/A. Because of the pilot's age, the new technology needed to keep him connected (which was being developed in Nevada when it exploded), and its new S2 Engine which gave it unlimited Activation power, this meant he had [what Asuka considered] an unfair advantage- Unit-04/A could create stronger defensive, neutralizing, and offensive fields, or use its field in conjunction with its silver armor to turn invisible!

Later on down the line, I imagined that Unit-04/A would finally fall in a mighty stand against the 14th Angel (between Unit-00's suicide run, and Unit-01's berserker), but would be irreparably destroyed. Then, using a variation of the Dummy Plug system, the pilot would have been assigned (by Seele) to pilot EVA-05 for the remainder of the series.
[My thinking here was that there were actually actually nine MP EVAs made, and the prototype for them was -05, so it was re-designated -05/A for the pilot's use. That way, there would still have been Units-05 through -13 for the movie(s).]
Then, when the fanfic moved on into the movies, I would have had Seele assigning Unit-05/A and its pilot to lead the other MP EVAs in the assault against NERV. (By that time, the pilot would have a seriously-bad grudge against Cmd. Ikari, so it would have been an avenging pleasure in his eyes to lead the attack.)

That is really cool stuff. I don't think I'm creative enough to come up with anything so sensible and awesome at the same time.

I am also writing a eva fanfic featuring unit-04, but in my version, it never exploded, it activated with no problems and was brought to tokyo-3 with unit-03. i really need to get around to finishing it.