The simple truth is that, like the author of the Moto Bisar review on this site, I have zero experience with Amdriver outside of the toys. So far as I know, the show was about heroes fighting evil while simultaneously appearing on a television show covering their adventures; a sort of spiritual precursor to the recent and popular Tiger & Bunny.

On the other hand, I have plenty of experience with the toy line, and it is excellent. The collection is split into two parts, ‘Amjacket’ figures which all have identical bodies but unique sets of clear-plastic weapons and armor, and the ‘Bisar’ line covering transforming vehicles/exoskeletons utilized by the heroes. 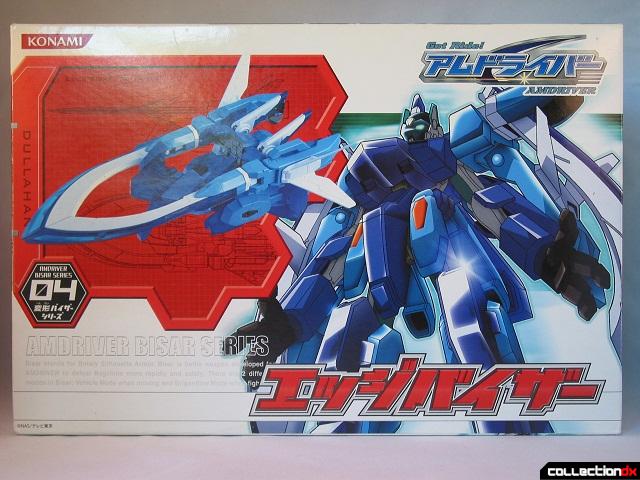 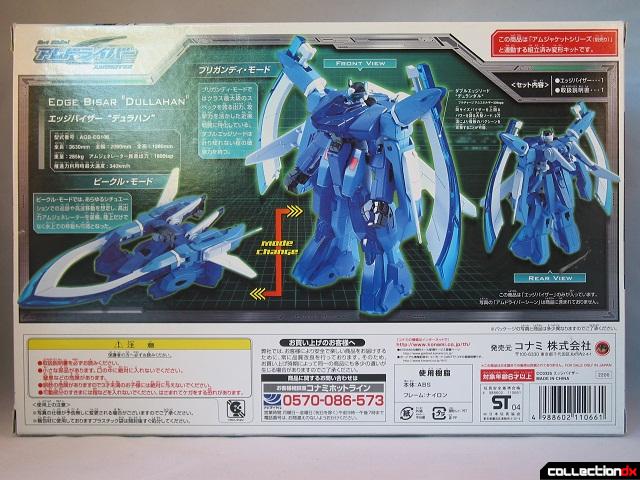 The gimmick, of course, is that the bodies and vehicles all use of a pair of standardized port/peg sizes, allowing parts to be interchanged and combined across the line. It’s a winning formula, and the Amdriver rendition compares favorably even to other popular executions of the same, like Microman and Mugenbine. Make no mistake, they’re no LEGOs or even Assemble Borgs, but you can still do a lot of customization with no actual kitbashing. 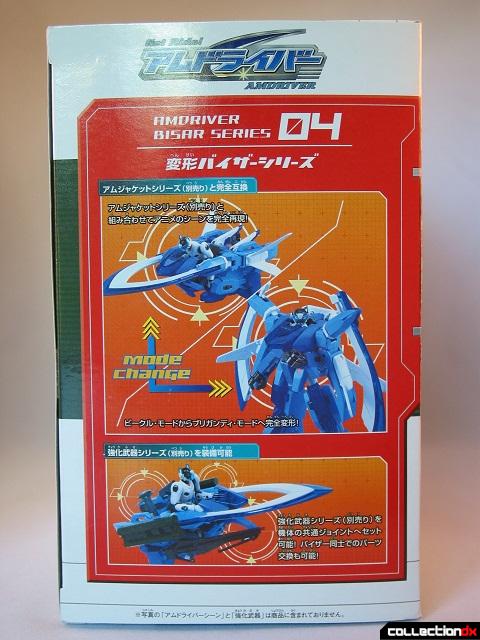 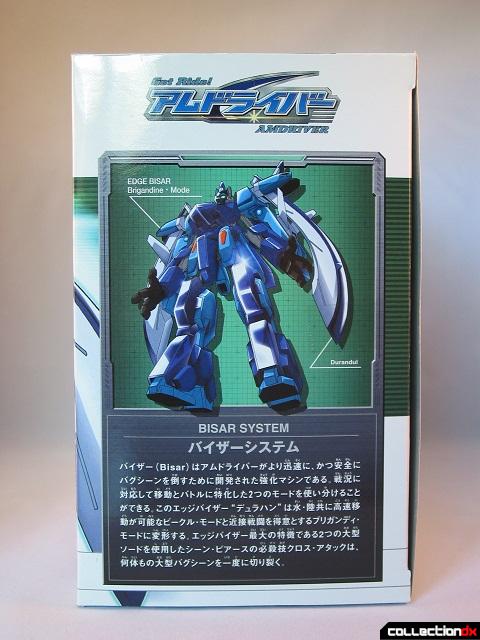 Like all Bisars, the Dullahan is based on the concept of a vehicle that transforms into an exoskeleton (or ‘Brigandine’). As such I’ll cover each mode separately. Take note that Bisars and figures are sold separately, so you’ll need a figure to really make use of any Bisar. 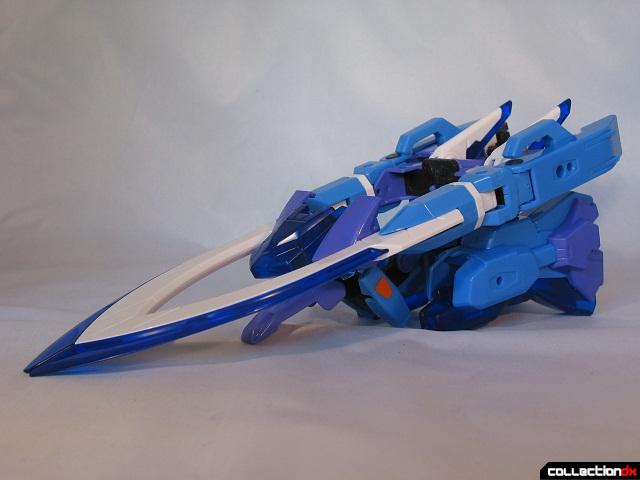 Strictly, while this object looks sleek and fast, it doesn’t actually much resemble any real vehicle. A jet ski, perhaps? Many Amdriver vehicles follow a ‘jetboard/jetbike’ pattern, and the Edge Bisar is no exception. According to the Konami website, it’s a hovering vehicle that can move rapidly over either ground or water, so let’s leave it at that. 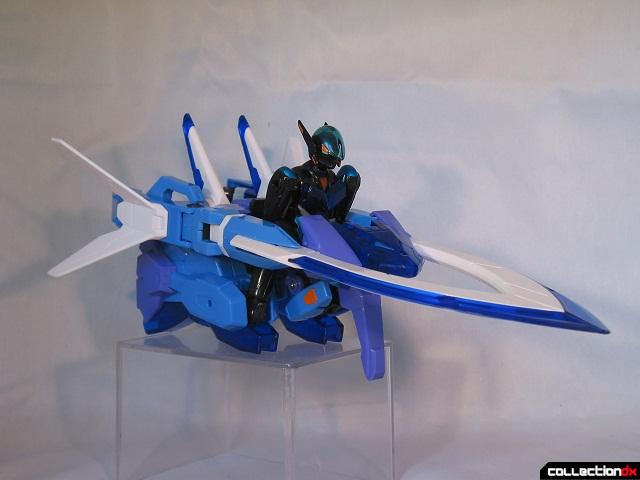 I’ll save my thoughts on the Amjacket body for a separate review, but suffice it to say that it is well-suited to riding objects in a straddling, motorcycle-like fashion. To get the rider in, you need to insert the legs under hinged covers on the boots-thinly-disguised-as-engines. 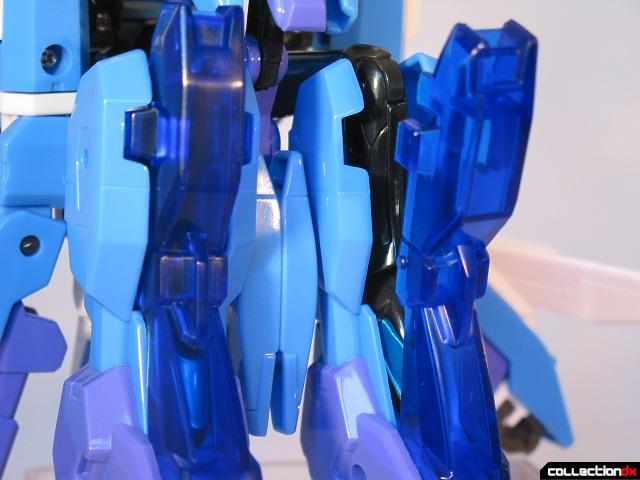 The fit is secure, and the figure’s hands can grasp the control sticks nicely. It’s always nice when a toy vehicle includes something for pilots to actually hold. It can be a little tricky to get everything in the right place unless you open up the cockpit at its separation joints a little. 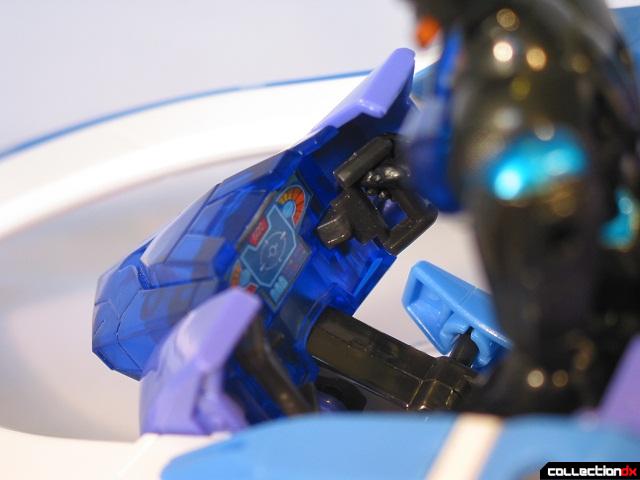 Once you’ve got your driver set up, the result is quite appealing. Several pieces can be swiveled and adjusted, and the pilot attaches solidly but retains his upper-body articulation so you can get some nice riding poses out of it. 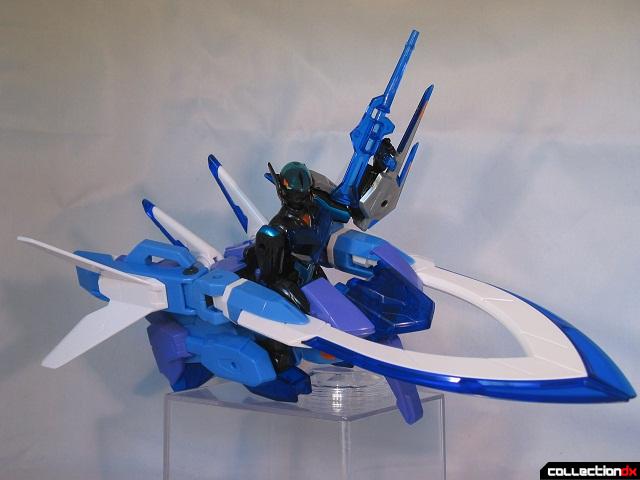 Another in the Dullahan shares with most other Bisars is a transformation consisting of a core block that properly folds into body armor, with boots and gloves/bracers that split off from the body for parts-forming. 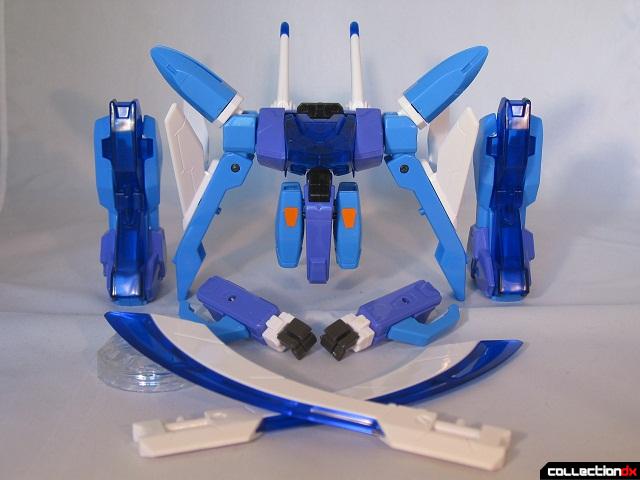 As seen here, with an Amjacket figure installed the imperfect transformation is sometimes partially rectified by having the boots attach to the riding figure, leaving them already in place when split off from the main body! 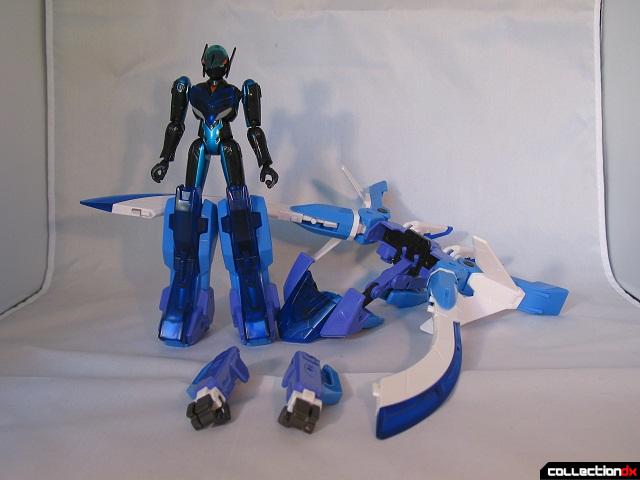 It’s also possible to just fold the core body armor right around the figure, thereby avoiding every removing the pilot during transformation, and this is really the best way to do things to avoid clearance issues.

A word of warning – the plastic used is of good quality and well-molded, but fit varies just a tiny bit. Things can get stuck together pretty tightly depending on temperature and insertion depth, and the pegs are not exactly thick. I recommend some caution when separating parts.

The Amdriver mecha design aesthetic is pretty chunky, with big block-like boots and giant weapons, and the Dullahan fits right in. That said, it manages to look ‘slick’ in its own way, with its clear parts, solid color blocks, and clean lines. Somehow, the enormous curved swords formed from the front of the vehicle look more impressive than awkward gracing the shoulders. 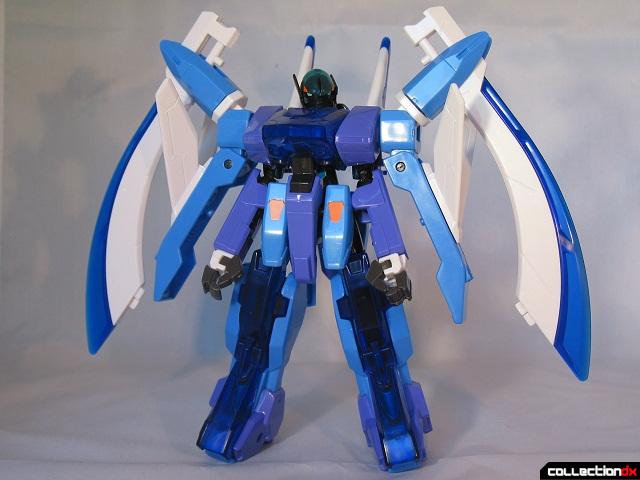 Additionally, it’s surprisingly articulated for such an ungainly design, with the ball joints of the Amjacket body contributing a lot of freedom, and the joints of the Bisar itself in useful places such as the shoulder armor and sword racks. The swords themselves can be held in the hands quite securely, and while actual slashing movements are hard, the Dullahan looks great just cutting a threatening pose. 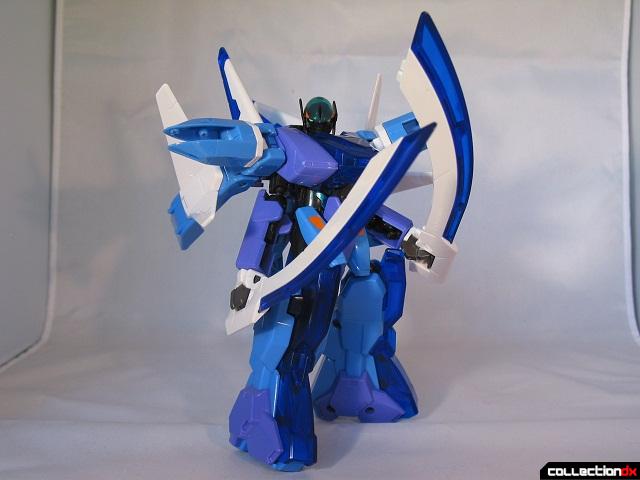 Finally, like all Amdriver toys, the Dullahan is bedecked with ports into which other Amdriver parts and equipment can be connected – in particular, those of the pilot, since they now don’t have another body to go on. 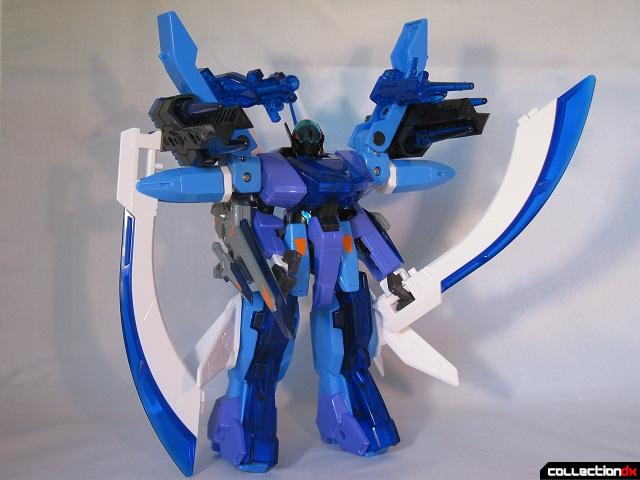 So, if the Dullahan is any indication (it is pretty typical for the line), Amdriver brings compelling visual designs and a successful play pattern to the table. Yet, these toys are largely unknown in the USA, and as far as I know even in its native Japan the franchise was a bit of a sleeper. So what gives?

The answer is pretty simple, and The Enthusiast already touched on it a little in his Moto Bisar review as linked above. Sadly, for all that the designs look great and the play pattern is beautiful on paper, once in hand the toys tend to give an impression of being unexpectedly finicky and limited. The variance in fit is just bad enough that every Amdriver set seems to have those two or three pieces that just love to fall off constantly in one mode or another, the bold lines of the animated mecha models often translate to awkward lack of clearance for movement of limbs and the like, and the joints of the Amjacket body are frequently just short of having enough tightness to credibly hold up heavy Bisar parts otherwise unsupported by the rest of the suit. To top it off, while parts are seemingly covered in pegs and holes, occasionally questionably placement and the aforementioned clearance troubles mean that the interchangeability doesn’t always translate to as much in the way of custom configuration possibilities as one might like.

So, do I recommend these toys? You bet I do. I love them; I own several and I hope to post reviews of some of the larger and more intricate ones here soon. Despite the flaws and the finicky tendencies, I can’t deny the appeal, and if you can get past having to work a little to get everything set up and posed the results are rewarding. Of course, there’s an extent to which my real interest in the line is what’s covered in the next section, so that that with a grain of salt…

For the small sector of the population that’s into these toy lines, it’s no secret that Amdriver and Busou Shinki are compatible. This isn’t through mere happenstance; Amdriver was an earlier effort by Konami and represents a sort of predecessor to the Busou Shinki philosophy of mostly-identical base bodies and interchangeable parts. The latter series is in many ways a consummation of the idea and a much better execution of nearly every aspect, although there is the ‘all girls, revealing outfits’ nature of the line to contend with.

As a result of this compatibility, nearly all Amdriver accessories can be utilized by Busou Shinki in one way or another, often by using the small extra connector pieces included in both toys’ packages. Here we have the Stag Beetle Shinki, Espadia, riding the Dullahan’s vehicle mode and modeling her version of its Brigandine. 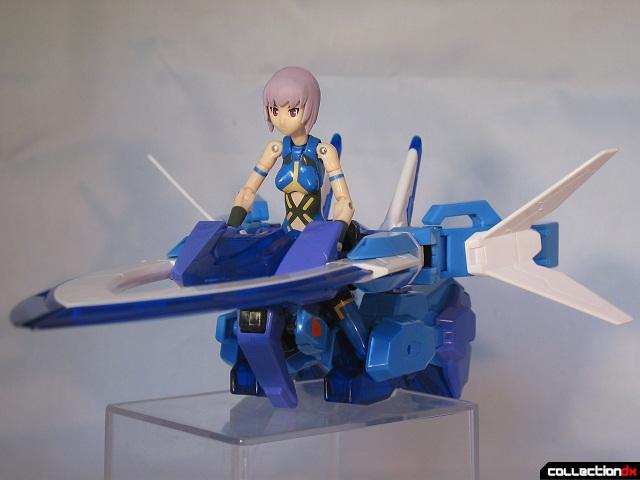 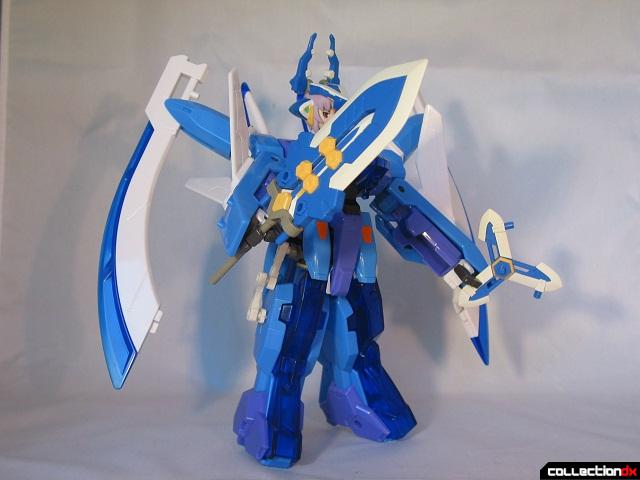 Great review! The interchangeability of the parts is really interesting. I might just have to check these robots out.

I remember these coming out around the same time as the 2004 Microman line which is why I never got any. Some of the designs were pretty imaginative.

A very nice review; some quality writing and photos. Look forward to more.

Sounds like we have similar experiences with the Bisars. My fondness for the designs obscure my dissatisfaction with the execution. Some Takatoku-type real robot decals on these would really elevate them.

These seem really interesting. Definately going to check into them. Good review and great pictures!