The full name of this toy is the ATM-09-ST Scopedog, from the series Armored Trooper Votoms. It's about 12" inches tall, 2.5 pounds, and is jam-packed full of features.

But first let me tell you about what this particular Scopedog is, and how I came to possess it. The normal production Scopedog does not have the red shoulder shown here. Yamato released a series of Red Shoulder Scopedogs for sale at Toys R Us in Japan. However, that version had the red shoulder on the right side, where this toy has it on the left side. So, what's the story? Well, when we visited Yamato USA's showroom for the New York Toy Fair in 2005, they gave us these Scopedogs as gifts. These are apparently production samples: Red Shoulder versions in the normal box, and there were only 12 produced like this. Why is the red shoulder on the opposite side? Roger Harkavy explains:

In the show, the Red Shoulder Squadron are the elite corps of the Gilgameth army, the baddest of the bad. They paint the right shoulder of their Armored Troopers red to signify the bloody missions they're sent on.

Chirico Cuvie is an ex-Red Shoulder, and in the initial episodes of the TV series he's trying to lay low in a town called Uuodo. He hooks up with a group of rogues who find out about his AT pilot background and push him into Battling, an arena sport where ATs fight each other for big bucks.

While preparing for one battle, Vanilla, one of the rogues, paints the left shoulder of Chirico's Scopedog red, saying something like, "If they think you're a Red Shoulder, you'll really freak them out!" Chirico responds to the effect of, "Well, it's the wrong shade of red, and it's supposed to be the _right_ shoulder." This shocks the group, and they start to realize that there's a lot more to Chirico than they assumed.

So right = correct, left = wrong. If you're representing a true Red Shoulder, the right shoulder needs to be red, however, if you're depicting the one that Vanilla was dressing up to impress, you need to make the same mistake he did and paint the left shoulder red.

I should note that the shoulder is just a regular version painted red, and can be popped off and put onto the other arm. Other than that, there's no real difference between this Scopedog and the regular version.

Now onto the review. 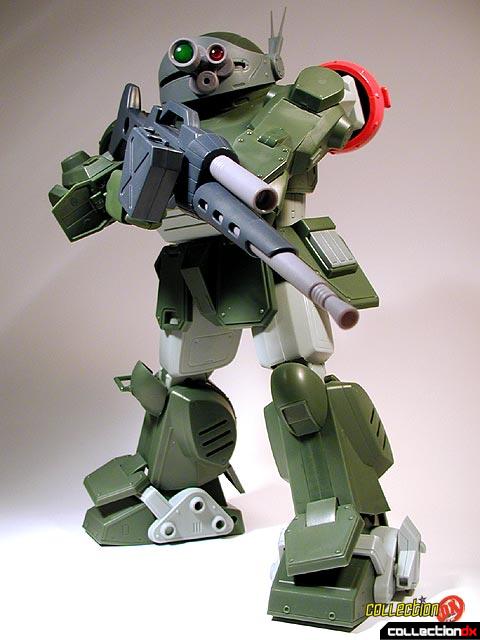 The first thing you notice about the 'dog is its size - its enormous. It towers over any previous Votoms toy, and makes your SOC?s look like babies. It's fully poseable, and each joint clicks as you put it into a pose.

The head can be removed, and the visor raised. The scope can rotate and swivel along the visor. Be aware that the small caps on the side of the head often shake loose during shipping. With the visor raised, you can see the pilot inside (sold separately) 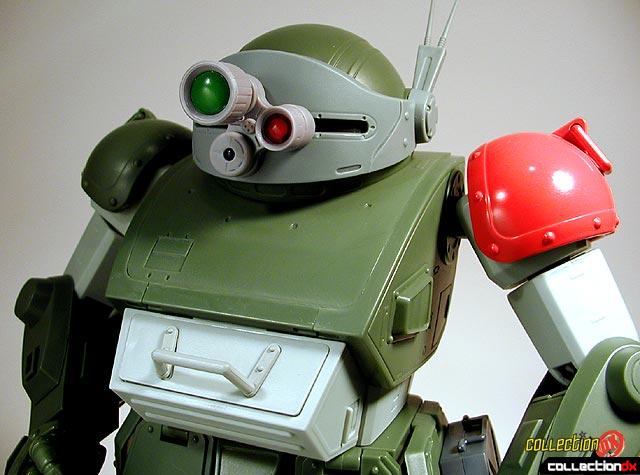 The cockpit of the Scopedog is really amazing. You access the cockpit by lifting up on the head assembly. Two hydraulic shafts hold it open for you, but be careful not to overextend these shafts or the metal pins slide out. Don't worry; these are easy to put back in. There is also a second door where the feet rest that opens. The cockpit itself is fully detailed, and ready for Chirico Cuvie to jump right in. The steering assembly moves back and forth with a fluid motion. The back of the body has 2 connection points for future armor packs, as well as a removable lower panel that reveals inner mechanisms. The waist joint swivels 360 degrees, but be careful - There are tabs at the 45-degree point that allow the chest and waist to separate! If you are not aware of them, you could unexpectedly loose your lower half during play. The waist features moveable skirt panels, and the side panels allow for interchangeable weapon packs. You can have magazine clip holders with removable clips or ammunition packs on. 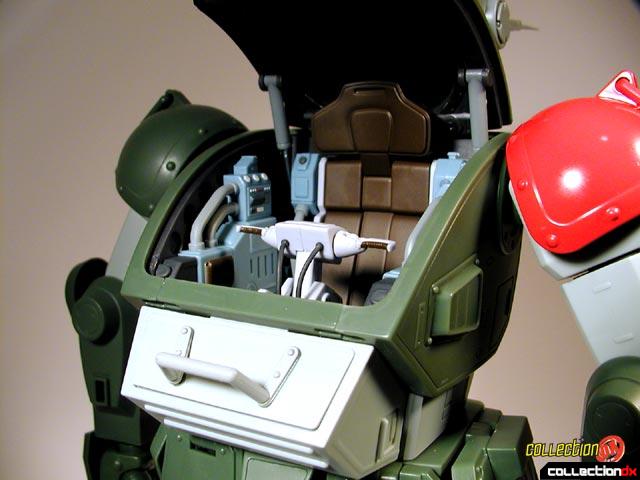 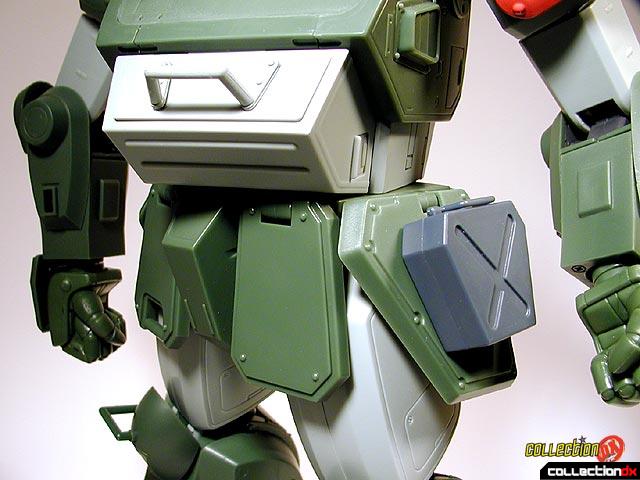 The arms are as articulated as you want them to be. The biceps feature removable panels, although there is no detailing beneath them. The forearms feature a spring action that you activate by placing one of the ammo clips into a hole in the arm. You can change between 2 different sets of fists, although replacing them isn't easy. I'd recommend removing the entire arm from the body before changing them because the shoulder joint cannot hold the weight of the toy. The figure will come crashing to the floor, leaving you holding the arm. I learned the hard way. The trigger finger is removable for easy weapon mounting. 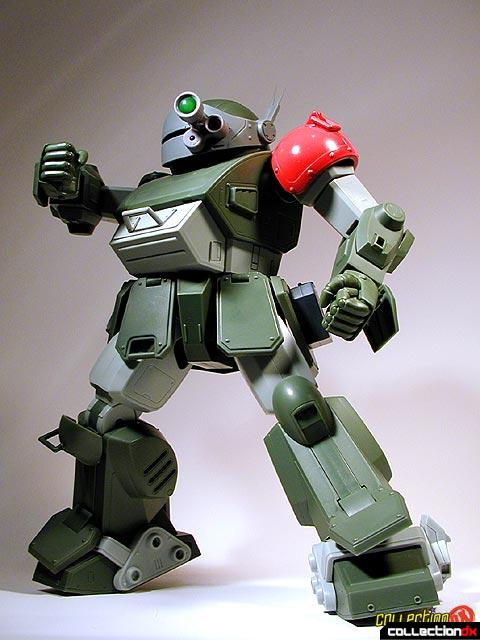 The legs are secured to the body by a die-cast connection joint - the most significant piece of metal in the toy. The legs will come off if you try an extreme pose, but I'd rather they come off than break off. The upper and lower legs feature removable panels with mechanical detail inside. On the side of the feet are spike assemblies that can lower to replicate the mechanism used to anchor the Scopedog into the ground when firing a heavy weapon. These assemblies are removable as well. The foot is jointed in several places, and has wheels on the bottom. The legs also contain a mechanism to create a "down mode", where the Scopedog's cockpit becomes flush with the ground. 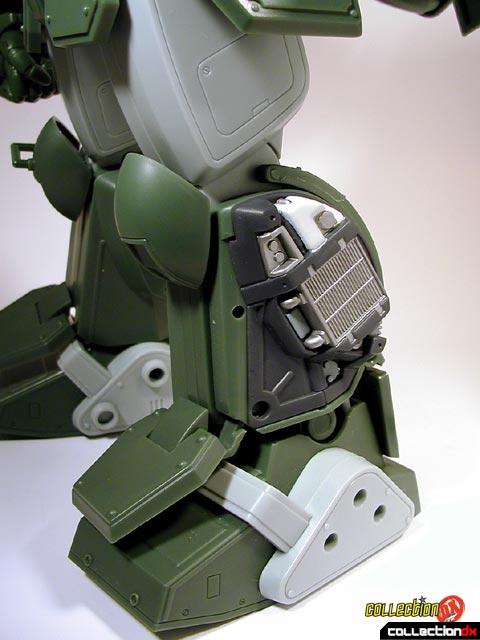 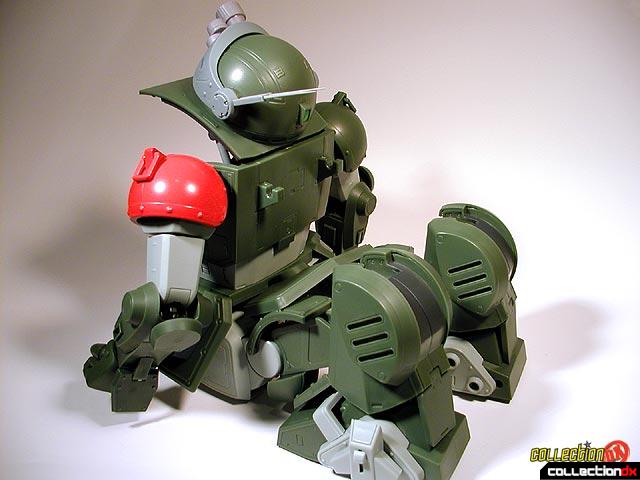 The Scopedog's main weapon is its
GAT-22 rifle, which is a great toy on its own. It separates into three sections: Butt, body and barrel, and features a three position trigger switch and a moveable handle. The ammo packs that are stored on the hip can be stored on the gun as well. 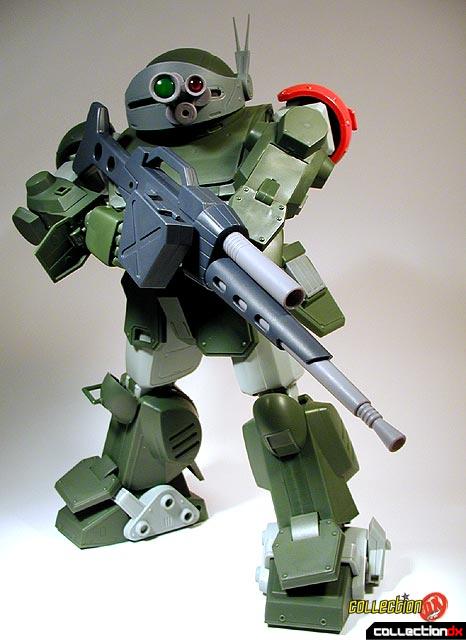 The box is enormous, and features a cover flap that opens to reveal a window that shows the toy in all its glory. It features a full color manual with original line art by the designer, Kunio Ohkawara, as well as a sticker sheet. 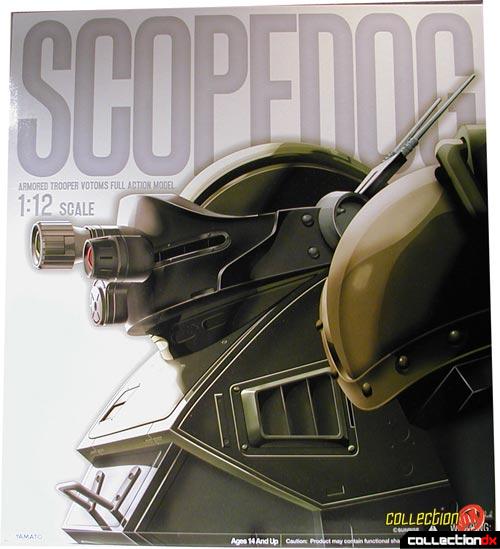 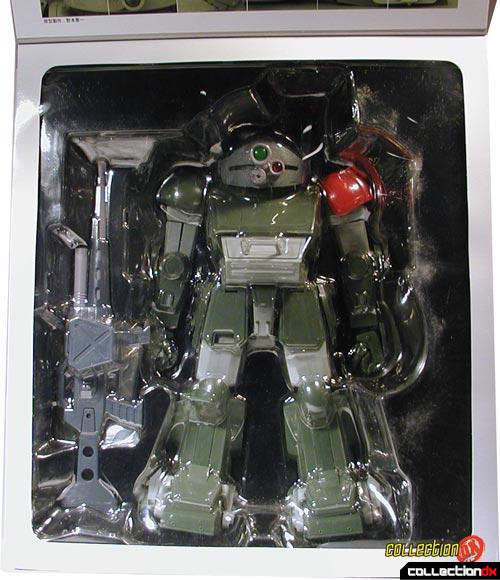 Hell yes. When I first saw the Scopedog, I was underwhelmed by the apparent lack of detail. But the pictures on the web did not do it justice. Once I saw it in person, it won me over. The toy is detailed for sure, but most of the detail is molded in. Every rivet and latch from the original line art is represented. You will have hours of fun just exploring it, finding something new each time. If I were to complain about anything, is that the toy is a little floppy. You really have to find a level surface or do something to reinforce the joints, because unless it is posed just right, it's going to fall over. I've heard mixed reports of some Scopedogs having this problem, and others not. It doesn't really affect my enjoyment of the toy much. I would have also liked to have seen sturdier shoulder and hip joints, so that the arms and legs don't come off as easily. But like I said before, I'd rather they fall off than break off. I'd recommend it to any mecha fan, or anyone who is a fan of a great toy. The price is a bit discouraging at first, but trust me, it's worth every penny. 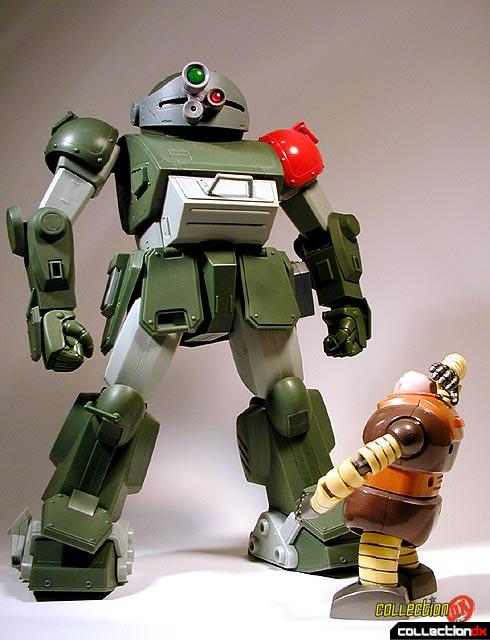