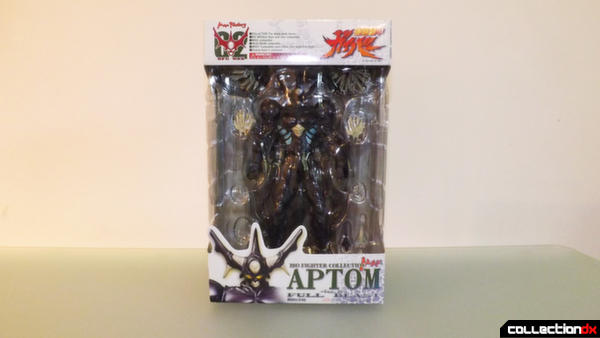 Created in 1985 by Yoshiki Takaya, The Guyver is an ongoing manga series written over nearly 30 years, Although the timeline in the manga is around 3-4 years. The Guyver franchise has had 2 animated series`, a 12 episode series that ran from 1989-1992, roughly based on the first 4 volumes, and in 2005 a 26 episode series based on the first 10 chapters and is a lot more faithful to the manga than the 12 episode series. The Franchise has also had an animated feature film titled "Guyver: Out of Control" in 1986 and two live action American films, "The Guyver" released in 1991 and "Guyver: Dark Hero" in 1994 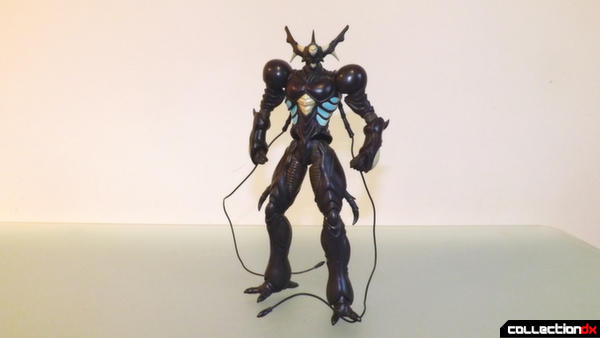 Through their Zoanoid experiments, Chronos Japan created a group of three zoanoids whose abilities could not be replicated, this group was called "The Lost Number Commandos`". Guyver 1 killed the two other members of the Lost Numbers which filled Aptom with the need for revenge. 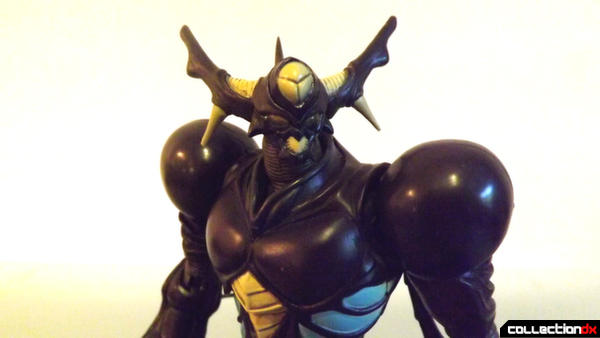 Through several more experiments Aptoms body became unstable and he was able to absorb Zoanoids and gained their power and strength. Aptom came to realize without Chronos, his friends would have never been killed and so Aptom eventually aided and later joined Guyver 1 and Guyver 3 in their battle with Chronos and he took this Form VI Battleform after absorbing four members of The Hyper Zoanoid Team Five, gaining the powers of Zx-Tole, Derzerb, Elegan and Gaster, his look in this form is mostly based on Zx-Tole and Elegan. 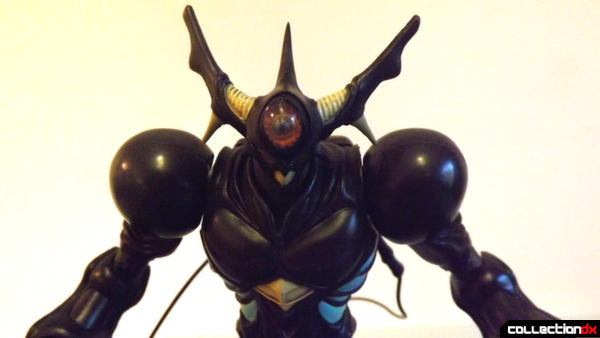 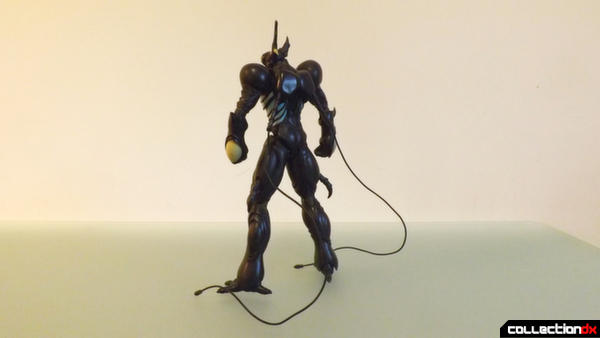 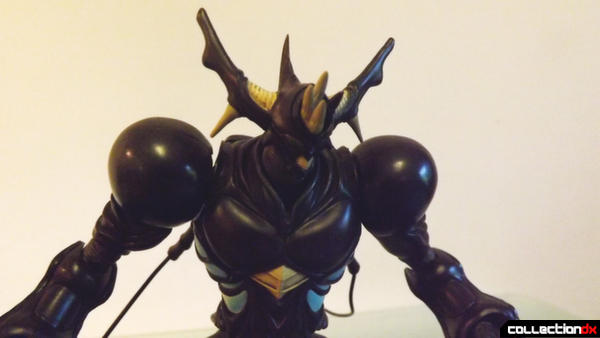 The figure stands at 8 inches tall and comes with several accessories. First he has two posable tentacles on his back, he can also have Bio-Missiles appearing from his shoulders and forearms that are separate shoulder pieces that clip into the ball joint. Aptom's head weapon comes with three different pieces, from a normal panel to a beam weapon and Bio-Missles. He has 5 hands, 2 each for the left and right hands and one more for his right, he also comes with the standard base. 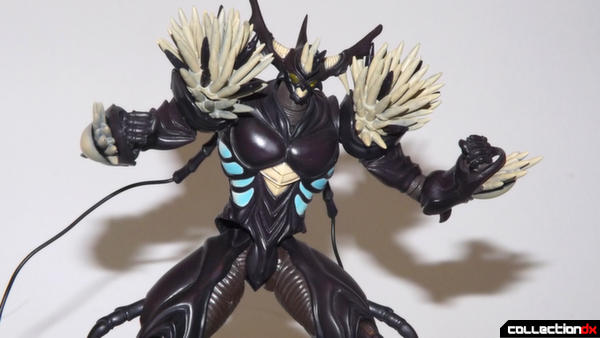 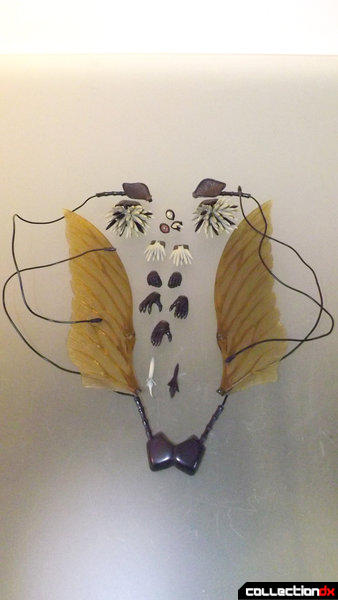 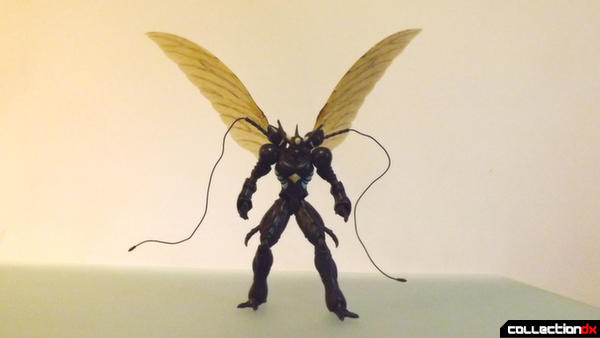 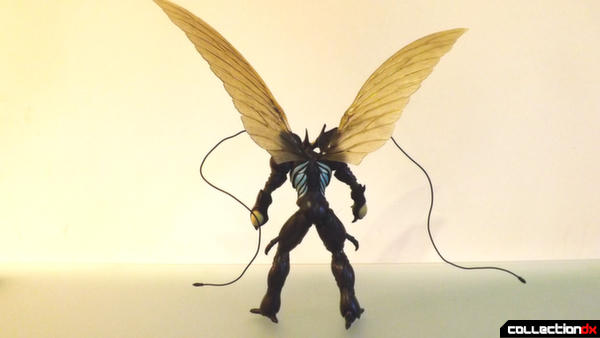 Aptom is sturdiest figure in the line, he has great articulation and achieve many of the characters iconic poses due to the feet being wide and well jointed. His elbows and knees can get around 90 degree bends, the shoulders, head and hips are on ball joints, and the wrists are on swivel joints.
The figure has a Diaphragm joint that allows you to pose him with a hunched over look. 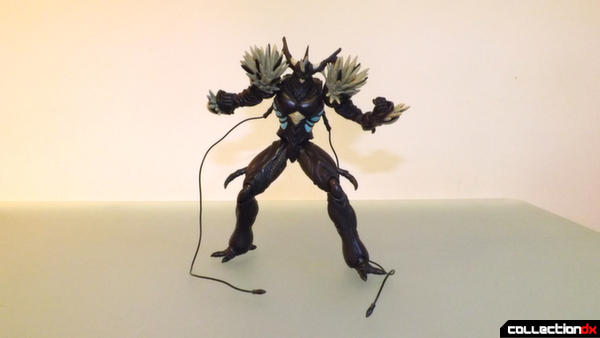 Aptom is one of my favorite figures in this line, i have hopes that Max Factory will release his Omega Blast form, which is his current form in the Manga.

Volume 5 of the Guyver manga was the "Aptom vs. the Hyper Zoanoid Five Show" since Sho was braindead following the fight with Enzyme II, and it took FOREVER to get through it. It was the first manga I ever read so I wasn't quite ready for manga pacing. The anime got through it much faster.

I love how this design looks unique, but if you know a lot about the Hyper Zoanoid Five, you can identity which parts came from which member.

its taken me a while to spot the Derzerb parts of Aptom, its really only the tan piece on his stomach.

I've never seen Guyver but I heard it's good ^.^

I just read your profile and you're...a GIRL collecter :D

Your the first female collecter I've ever met that isn't a Transformers fangirl (not that I have anything against them, even if I think their Yaoi obsession is weird...then again, I love Yuri so I can understand them^^;) but I'm glad they're female collecters of robots and stuff ^.^ (I'm really sorry if I sound creepy, but I've never met one before^.^;

theres an awesome anime guyver series from 2005, bio-booster armor guyver, it has 24 episodes, i recommend tracking it down and watching.
its better than the other films or series` and it sticks more closely to the manga.

as for being a girl collector, i cant be the only one, even on here!

i have a ton of reviews coming up, not just guyver.....

I think you might be the only girl collector on here, but I COULD be wrong

Also, good luck on your other reviews!

I'd back up that recommend, not only is it a far superior anime to the original, the theme music is much better than the original.

If your into theme music anyway hehe.