Here's an oddity for you.

Back in 2003, UniFive put out a line of block-style blind boxed figures called DeQue. The line didn't take off and there weren't a ton of releases. But what they did release was in interesting selection of heroes and villians from Super Robot Wars. 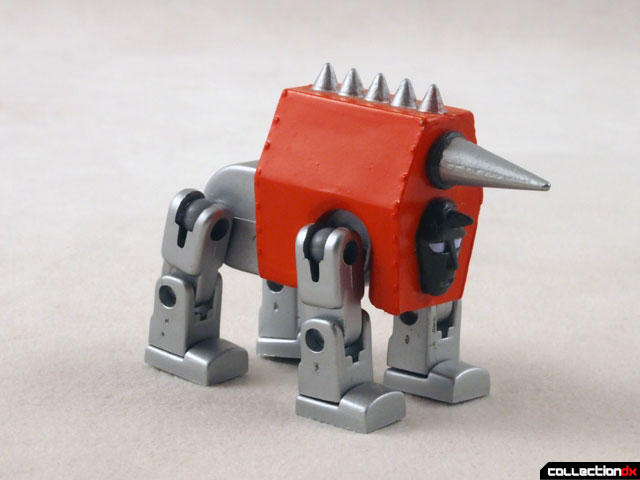 One of the more interesting figures in the line is this Mazinger Z Kikaiju named Toros D-7. This 4-legged mechanical beast appeared in the original Mazinger Z manga and then again in the Mazinga Z vs Devliman anime. 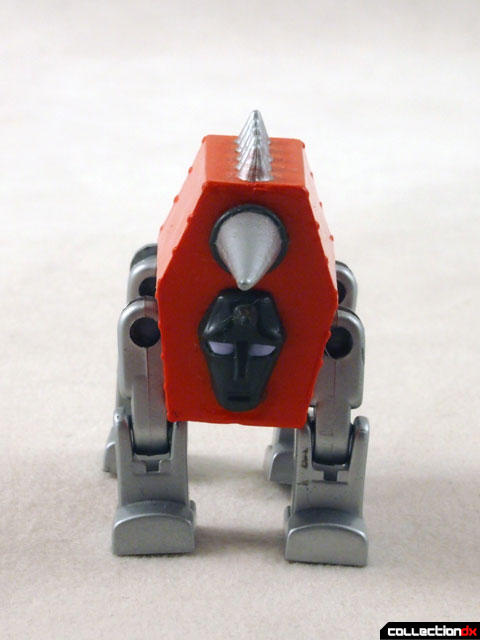 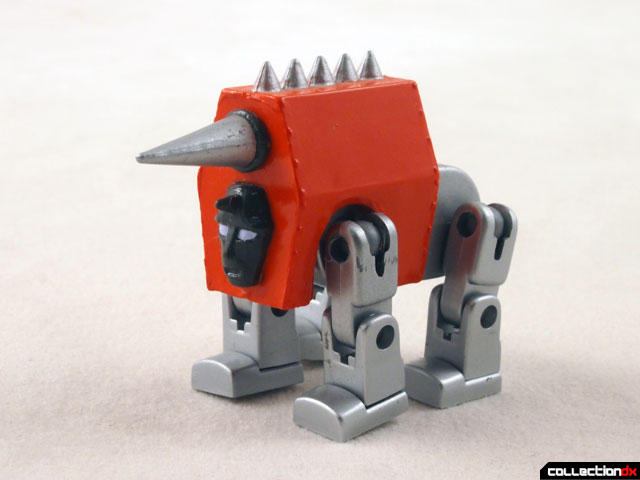 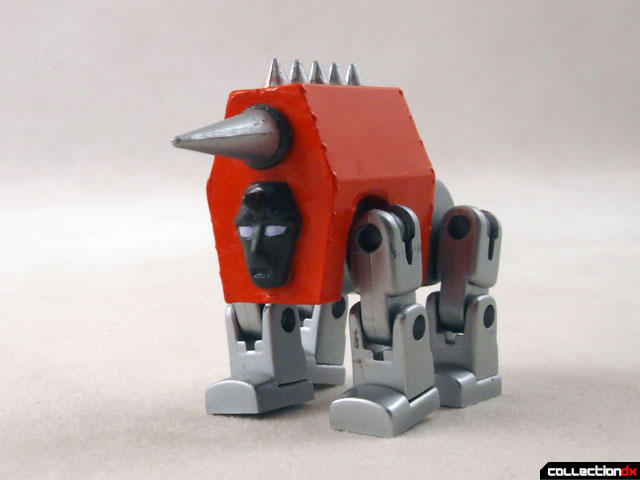 The only other toy I know of this character is a Bandai HG Gashapon figure.

The DeQue figure is only about an inch tall but features ball jointed legs with hinge knees. The orange body just sits on the sliver plastic core. 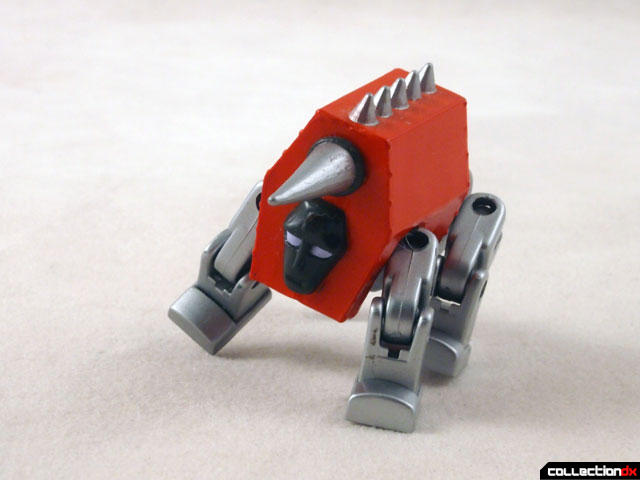 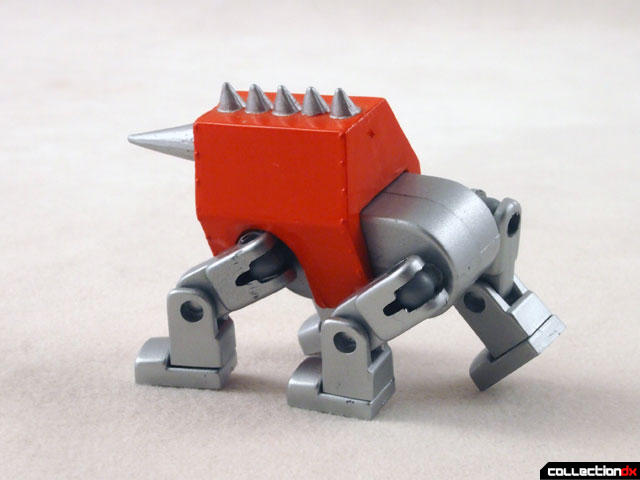 Aldo included with all DeQue releases is this brown base and two connector pieces. With this you can use the base as a stand or put the connectors on the side to connect with other bases. 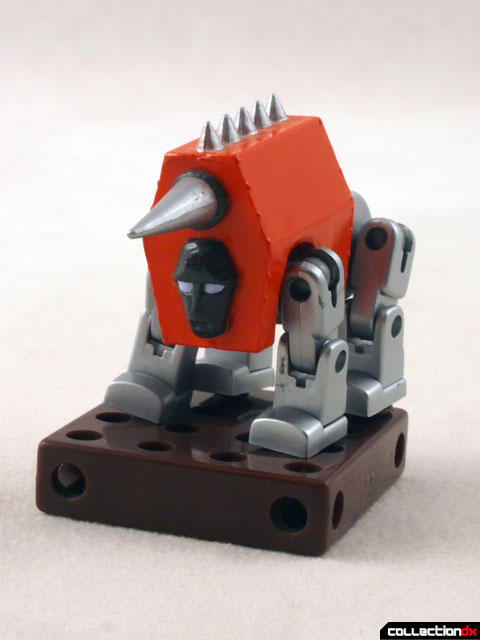 Unfortunately the quality of these sort of suck. Most of them had fiddly parts and accessories that didn't want to stay attached, and some had poor paint jobs. 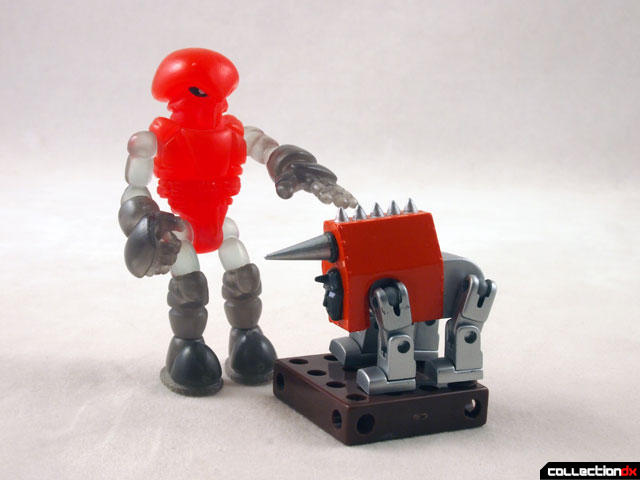 5 comments posted
I got two of these in the

I got two of these in the free bucket at the Summit. They are the two original designs from Super Robot Wars.

I wish I could un-free them. Josh is right, these things aren't that great UNLESS they are the classic super robot characters like Reideen and Mazinga. Those guys seem worth getting.

Josh, if you ever want these two back, I will gladly pay the postage to bring them home again.

Wait, are they the last two in this image?
http://d2ev13g7cze5ka.cloudfront.net/unf/unf51118_1.jpg?v=1337139905
I'd totally pay shipping to take those off your hands. Had I seen them at the Summit, I would've grabbed em too. Just being a tiny Wildwurger and Altairlion is enough for me :3

Yes they are. They both have their boxes and paper brochure HOWEVER, the blue guy on the right is missing his shield and backpack/boosters. He was like that when I found him and I did not realize he was incomplete until I looked at the brochure. Though, given these are Josh's, he may have those missing parts Iying around somewhere in his house, in the freebie bin (I remember there were a lot of little loose parts in there), or on his grass in the backyard from the Summit. Feel free to ask him to look for them.

And yes, you have first dibs on these. Just pay me the shipping (I'll try to get the lowest cost possible). So bubble envelope...should be around a buck or two max I hope.

Okay, if you hit me at admin@recognizer.net I'll let you know my address and you can tell me where to Paypal. Totally worth a few bucks. Thanks!

I will do that sometime tomorrow. Please contact Josh and ask if he can check for the two missing pieces.