Terminator 2 Judgment Day - 1/6 Scale T-800 Is made by Aoshima, and like its ventures into Thunderbirds and Getter Robo, the Chogokin is well-crafted and full of diecast. 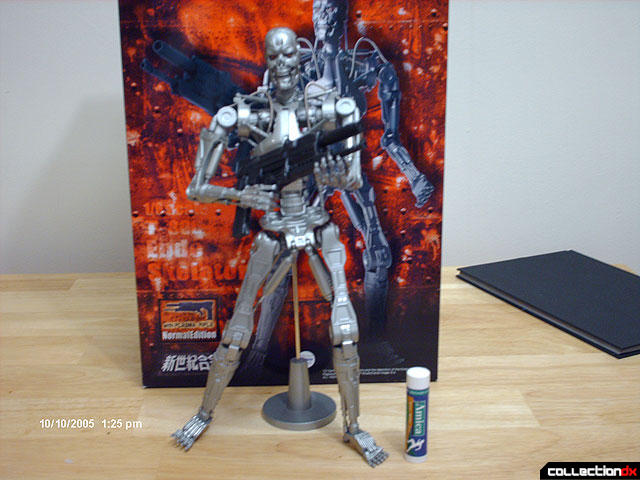 The Terminator figure is big, similar in size to Masterpiece Convoy/Optimus Prime by Takara. It has impressive metal content and is very heavy upon holding the figure. It has tons of pistons and joints that work and some that are just plastic for show. The figure comes with a stand that clamps onto the back of the figure to provide stability when posing (he is top heavy). 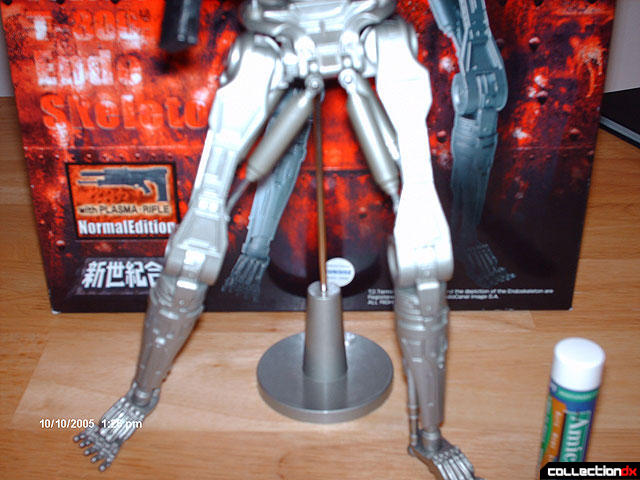 The Terminator poses pretty well but nothing too extreme; the head just tilts and arms and legs pump but no real side to side. The figure is nice and great for cool menacing looks (the red eyes of the skull-like face are right on). There are only two flaws and, while annoying, okay if you pose with care. The pistons can bend if you move legs or arms too quickly (one of mine did) and at the top of the arms are the two spring-type wires... 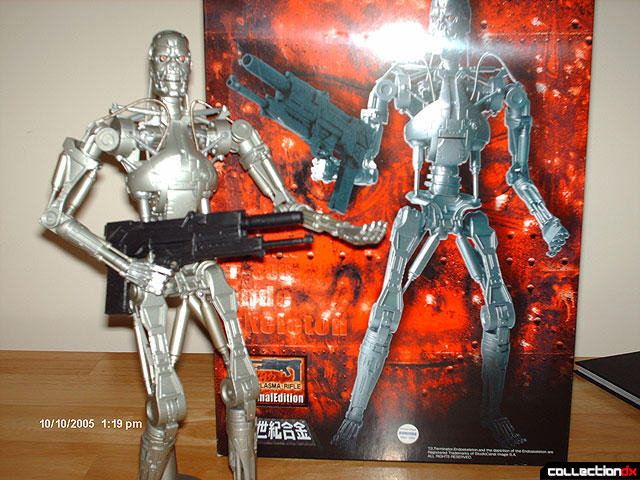 They just rest into two holes near the stomach but attach to the arms with pin size pieces of plastic. The angle is awkward and they can easily snap. Mine did; I had to do some repair work to reattach them, and even now, if you move arms by the shoulders, you have to be very careful. 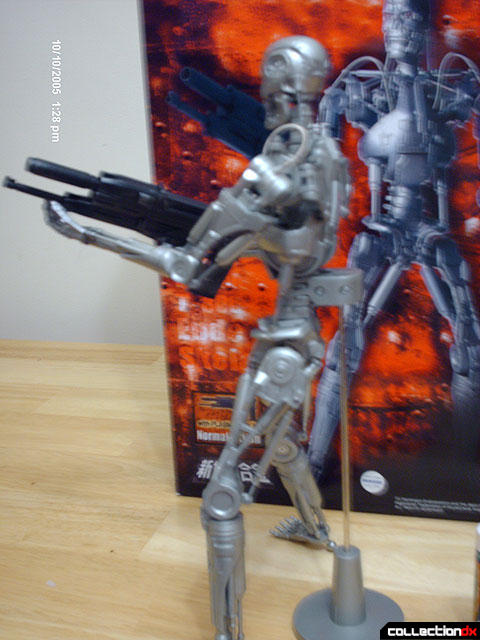 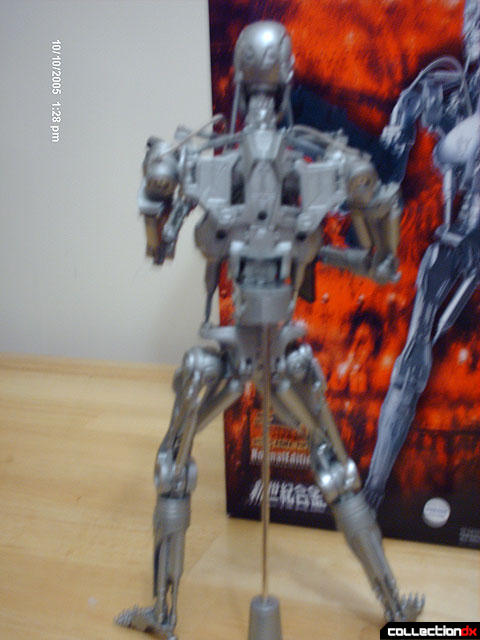 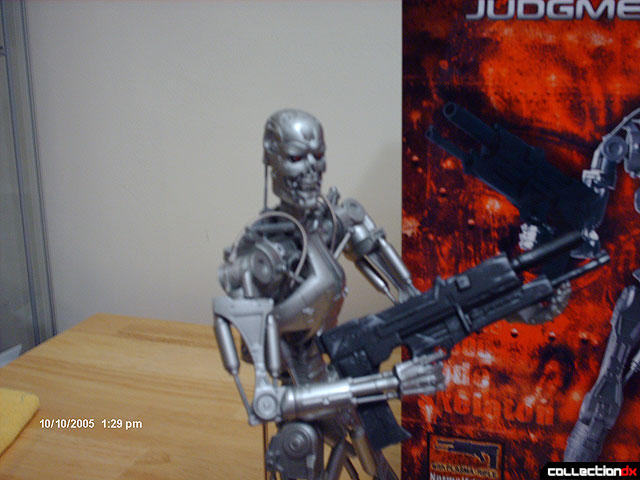 I love this figure, the imposing stares, the large size, and the cool positions and gear type look. All the pictures are of the normal version; there is a also a weathered version that comes with different gun.

I bought from Statue Toys for 130USD not including shipping; not a cheap chogokin, but not extreme like the Fewture line. Overall a nice piece for chogokin fans or Terminator fans alike. 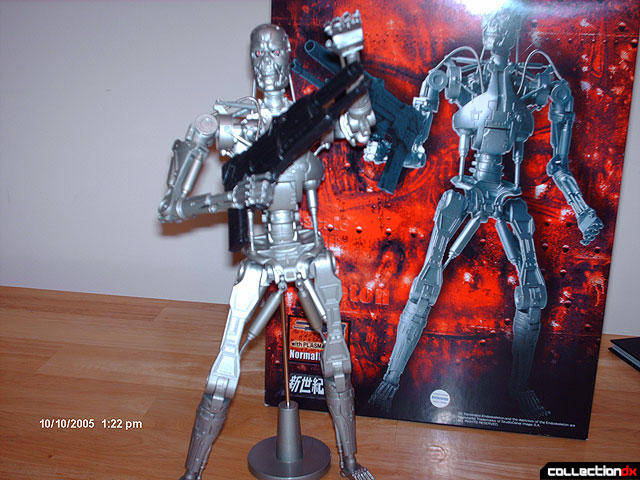 Couple months ago, at my local toyfare, somebody is auctioning this toy. And is sold for about 65$...

wish I had gotten for that:) I thought 138 was cool, oh well one thing I have found in buying chogokin you can get a 100 USD swing on just about anything, if you have patience things are good...too often I have little patience= bad waste of $$$

I've always wondered about the quality of these figures. Cool to hear about them! The diecast content is pretty key for a character like this!

One thing I'd suggest, though...you can definitely improve on your photos with a simple, cheapie tripod, a backdrop (even just a white sheet draped down the wall onto your table), a little more even lighting. If your camera's decent enough, you can play with the white balance settings (to get more accurate color), macro mode (to get sharper pics), and aperture/shutter speed settings (to get perfect lighting in the shots). Macro mode plus a timer/delay and the tripod will ensure that your pics are super-sharp.

Good luck and have fun with it! Looking forward to more!

Yeah noticed the close up pics came out bad, two were money shots that looked great and then the other three were poor, Think it is the camera, will use the better one for next time and will use your advice on tripod and backdrop, thanks

Since I don't have mini studios, I use papers for background. But the tripod is a must.

Remarkably, I've never used a tripod until just recently. And considering that my camera is pretty cheap, it's amazing I've gotten results as good as I have. Not always perfect, but usually ok. But my camera has trouble sometimes with closeups (even with a tripod) and it ain't worth crap for taking pictures of glowies, which is partly why I haven't reviewed any. Some day I'll upgrade, but I suspect it won't happen until it's absolutely unavoidable. In the meantime, in case anyone didn't know it was there, there is a section on tips for photos in out FAQ

Yeah, if you have sufficient light, a tripod isn't always necessary. But with just ambient room lighting, you need one for sure.