When I was real little, I remember watching Creature Double Feature on tv with my dad every Saturday morning. He worked long hours, so it was a real nice treat to be able to share that experience with him! I remember watching AIP's English-dub of the Daiei classic daikaiju eiga, Majin, Monster of Terror (or "Daimajin", in Japanese). Despite having seen the complete Daimajin trilogy about a million times via bootlegs of the AIP dubs as a teen, and more recently via ADV's DVD releases, I still have one very specific memory from one of the films when my father and I first saw it back on Creature Double Feature. 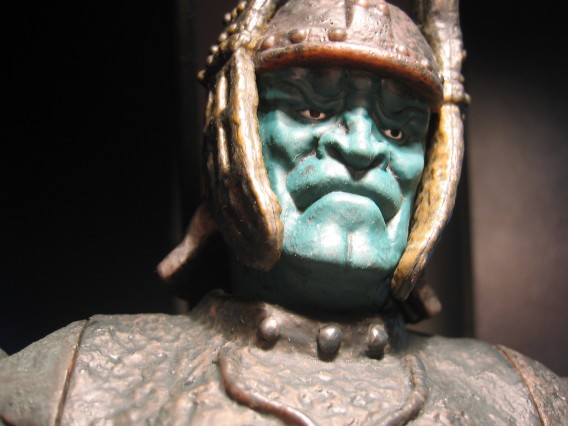 The baddies end up desecrating the stone statue of the oppressed villagers' God, the Majin...by driving a 3-foot steel pike into its forehead! To make a long story short, the statue comes alive, runs amok--and here's the juicy part!--when he has the main villain cornered, he pulls out the pike, which he'd neglected to remove during his rampage, and impales the sumbitch!!

Divine retribution in the house!!

Needless to say, imagery like that'll stick with a 5-year-old! Lemme tell ya, I'm no theist, but I'd kick ass for this Lord! Yup, this was no kiddie-kaiju flick with a moral at the end like "Godzilla vs. the Smog Monster"!

Fast forward to today: avid Japanese robot/glowie monster toy collector and 80's nostalgia geek. Well, I got the dvds covered...now about those toys... There's been some Daimajin love here and there as of late, but nothing by way of standard-sized classic-sculpted glowies. There's one from Marusan of Daimajin as a statue, but nothing so far of him as a fully-awake, pissed-off God.

Time to take matters into my own hands. A thread started by sketcher on ToyboxDX first caught my eye: apparently, Sega had released a 14-inch figure of Daimajin in a very realistic and menacing sculpt. I knew right there that I had to have it. A trip to eBay and $20 later, I had one of the best Daimajin figures out there. While not the largest available, it was certainly the best compromise between size/sculpt, and price!

At the time of purchase, I was heavily into glow-experimentation (or was that drugs?). Well, either way, it didn't take very long for me to grow weary of the non-glowiness of this God. I mean, he IS a God, afterall! Shouldn't he at least glow in the dark!? 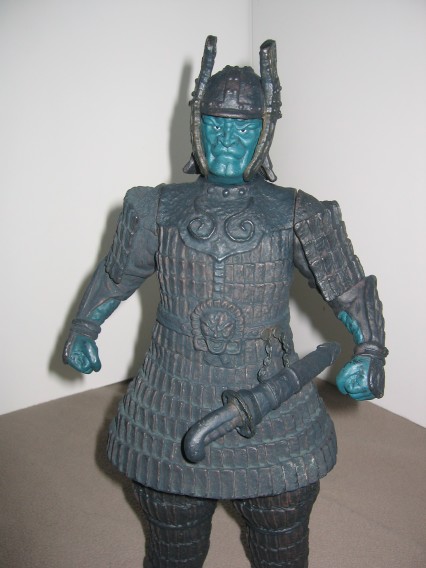 Menacing...but not quite there yet...

So, just as with my Garamon/Garadama glowie custom, I went to work...armed with a combination of glow hand- and spraypaints from ReadySetGlo. This was different, though. This time, I was trying something I'd never attempted before. Not only was I messing with a now hard-to-find toy of a childhood icon, but I was trying to create a full glow-in-the-dark toy from a completely non-glowie one.

At first, I just hand-painted the face in green glow paint and the eyes in aqua glow paint (about 3 coats). This resulted in a very craggy, chiselled rock look, which I like. 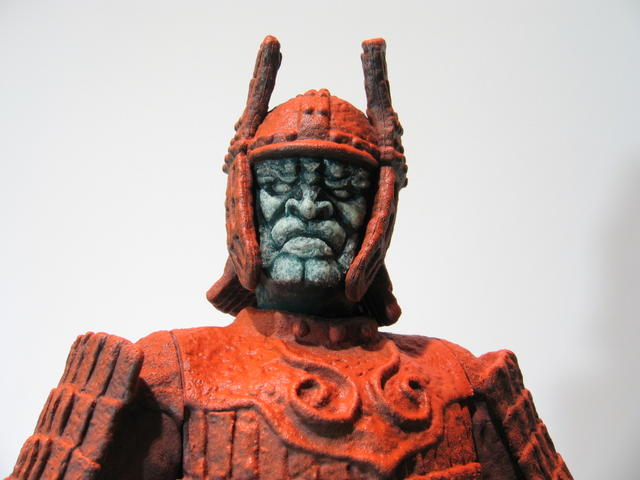 But with the recent advent of glow spraypaint, and bolstered by my experience with Garamon, I decided to push the envelope. I hand-painted the fists green and parts of the creepy Oni face on his armor aqua (I left the Oni's eyes and teeth unpainted to produce a more ghostly look while glowing...). 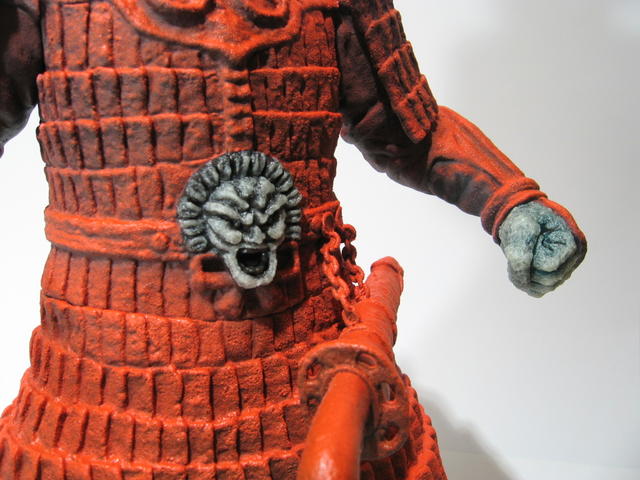 After some masking with trusty Parafilm-M, a couple cans of red glow spraypaint, and four coats of spray varnish, I think I can safely say that the gods would be pleased! 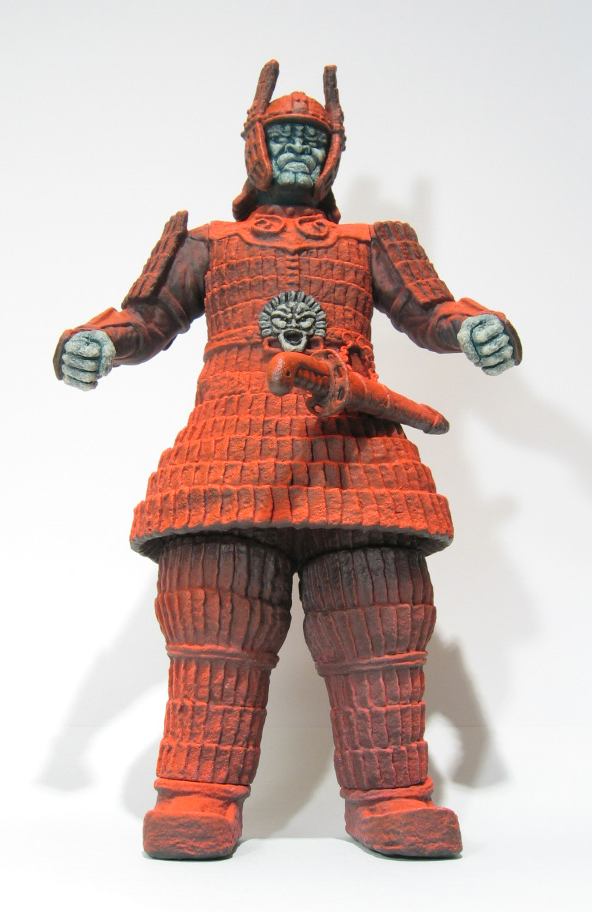 I used an interesting spraying technique somewhat similar to what I did with Garamon. I actually suspended the toy horizontally and sprayed in only one direction: from the top (his head), downward towards his feet. Obviously, this deposits a lot of glow paint on the top, raised surfaces, not as much on the flat, vertical surfaces, and very little on the downward-facing surfaces. The effect is that, from the top, he looks bright as a raging sun, while from below, he looks ancient--almost rusted--with malice! 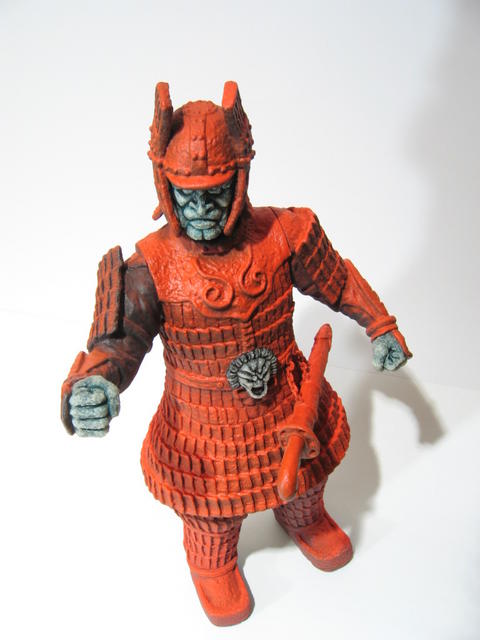 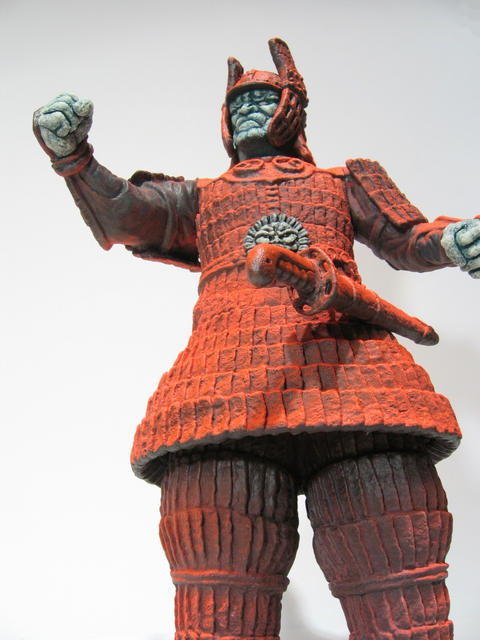 The glow effect is pretty amazing. First of all, it's RED! Ya just don't see too many red glow-in-the-dark toys! Standing among other, traditional glowie toys, he stands out magnificently! Also, because of the uni-directional spraying, it always looks like there are shadowed parts of him while glowing. This faux-shading makes the glow seem more "realistic", as though there is some sort of light source right above him. As far as I know, this effect is pretty unique among glowies, which normally cast out light in every direction from every exposed surface. 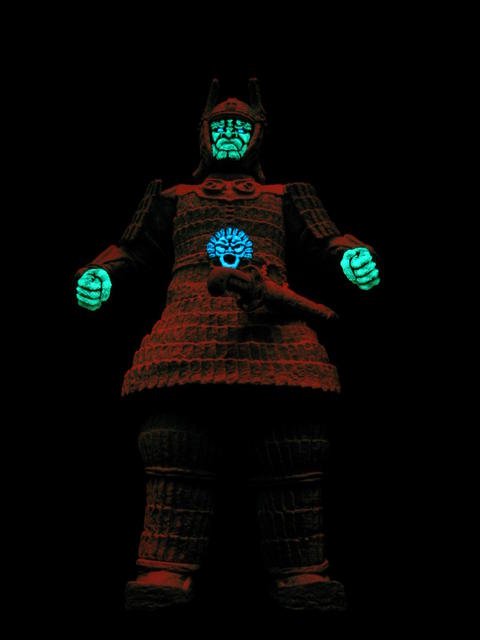 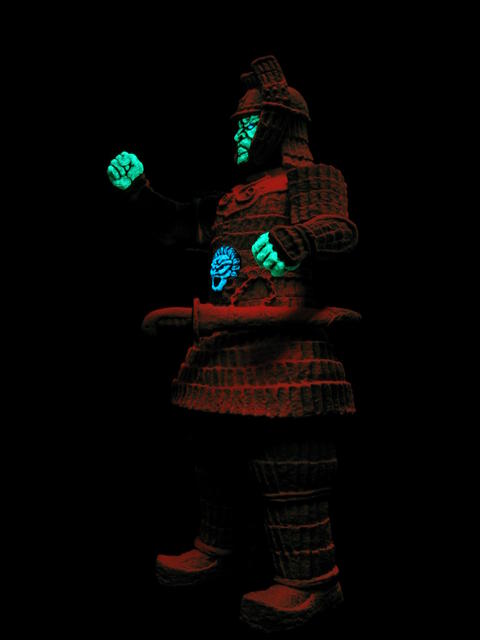 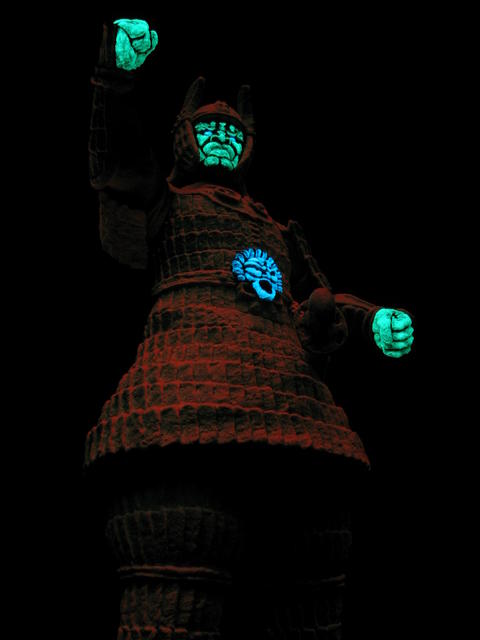 Another effect that's clearly noticeable right off the bat is the intensity of the glow. None of these images are altered in any way--I just increased my camera's exposure time to about eight seconds. You can tell right away, though, that the red is far more understated--again, like rust--than the intense green or aqua. I dig this contrast a lot! 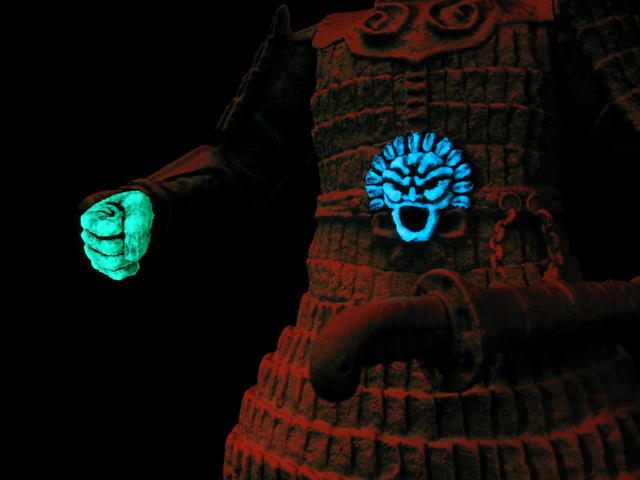 One last note about the glow is the duration. Interestingly enough, the red spray glows for about 50% longer than traditional glow vinyl toys. Also, it holds onto its intensity very well (i.e., it doesn't dim much over that time). Meanwhile, the green and aqua paints actually last maybe 5-10 times longer that traditional glowies...often throughout the night!

Light absorption differs as well: if I leave just a cheap desk lamp on in the room for a while, all normal glowies will at least charge a little, while these glow paints remain almost completely dim. These paints require exposure to more intense light to charge any appreciable amount. Direct light from a brighter lamp or, of course, blacklights work great in this regard. And once you get them charged...! 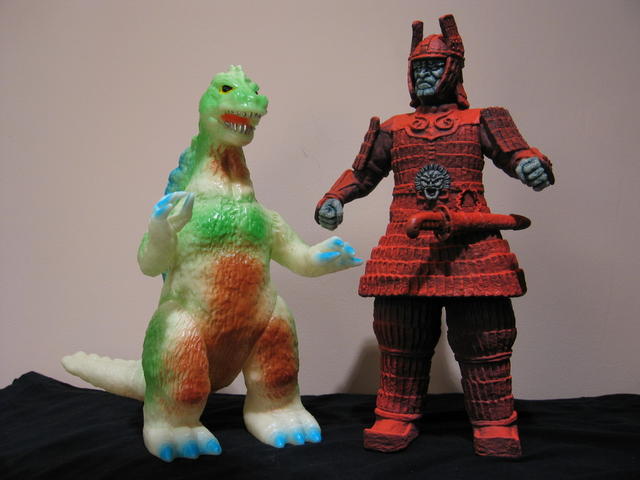 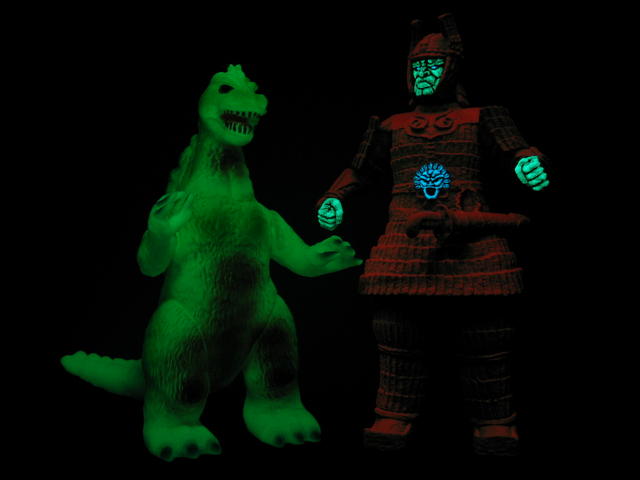 (Big up to sketcher for letting me use his unmodded Daimajin pics! I never took any pre-mod pics of my own!)