The turn of the Millennium was a giddy time for Japanese toy manufacturers and collectors alike. Properties which had disappeared or languished for a decade or more were rebooted on a grand scale. Takara released a glut of new Microman product and the long-awaited semi-reboot of the classic G1 vehicle-oriented Transformers. And Bandai gave us...new Gobots. Bandai went all-out with Machine Robo Rescue, producing a cartoon and gobs of toys in every scale.

Collectors promptly heaved a collective sigh of indifference and turned their attention elsewhere. The line failed in spite of the mostly excellent toys, among the finer examples of PLEX’s work.

The work-horses of the line were the five-figure Gattai sets, each depicting a thematic group of mecha from one of several larger rescue teams. The MRR Gyro team is the air support for the Blue Sirens team, which tends to law enforcement emergencies.

These were packaged in sturdy illustrated window boxes. The trays within are flimsy but nicely laid out. 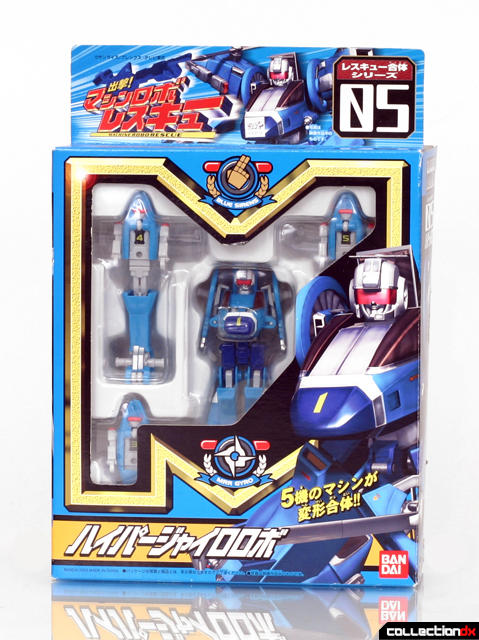 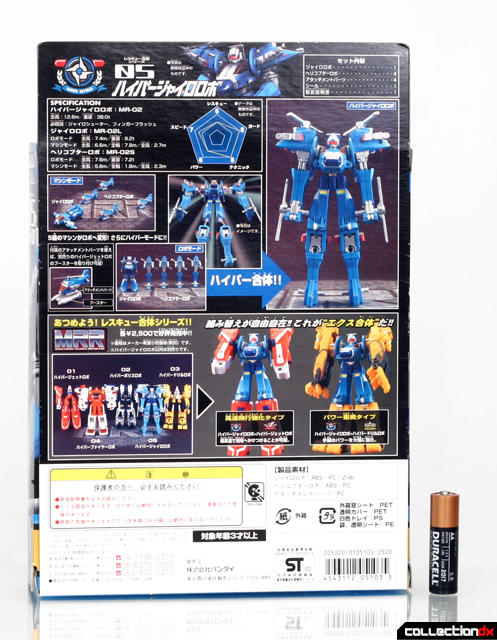 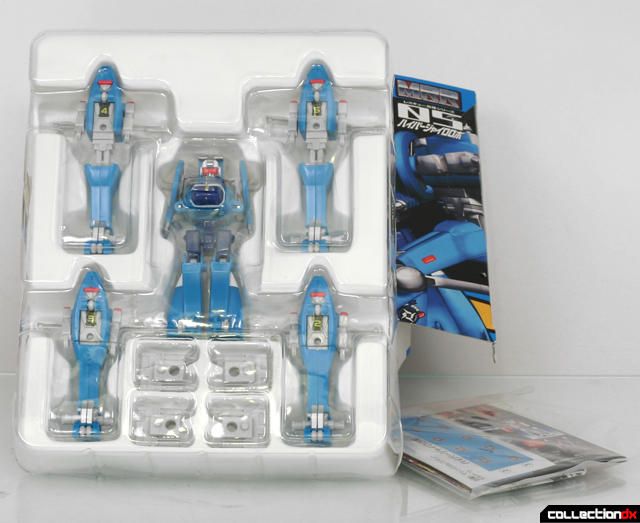 Each team consists of four identical (but for numerical markings) drones and a unique core figure. 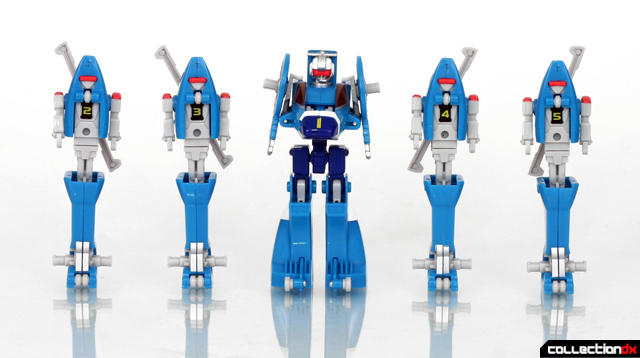 The drones are fairly simple but roughly similar in size, though not complexity, to the original MRR 600 series toys.

The Blue Siren drones are among the weakest of the line. Helicopter mode is adequate, but the robot mode is kind of a joke. Transformation consists of removing the landing skids, extending the tail, and standing the thing up. You’re left with one goofy looking bot, really thin and tall with stubby widdle arms. 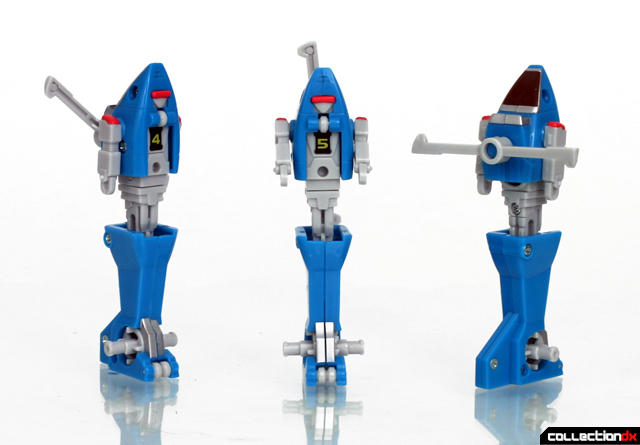 But here’s a waist joint! 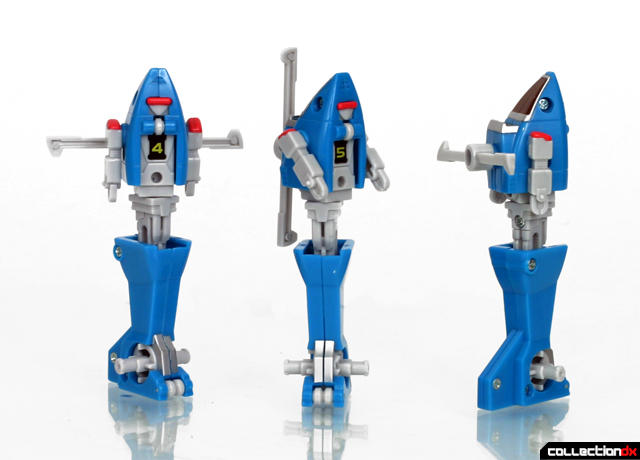 The central figure is stronger, barely. Vehicle mode is cohesive if a bit nonsensical. 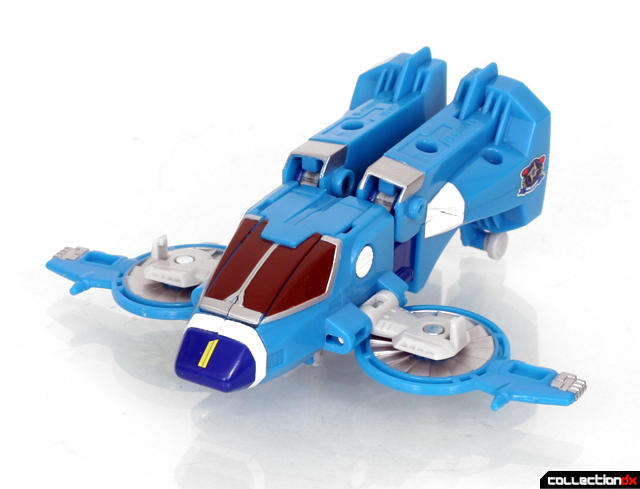 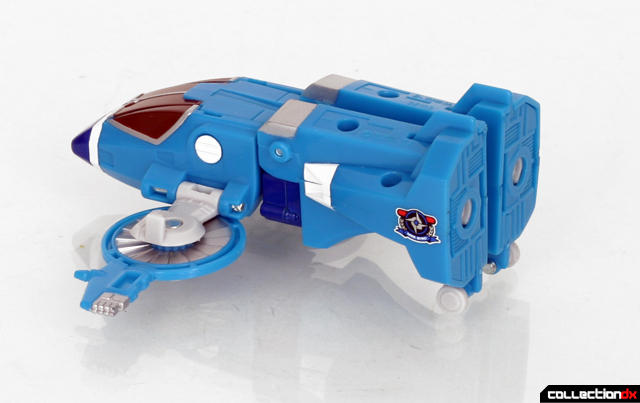 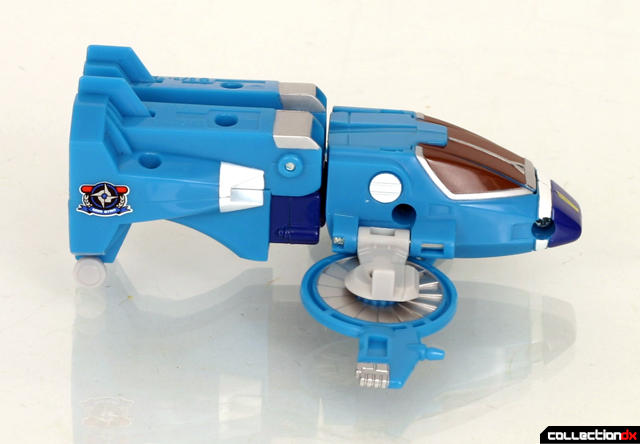 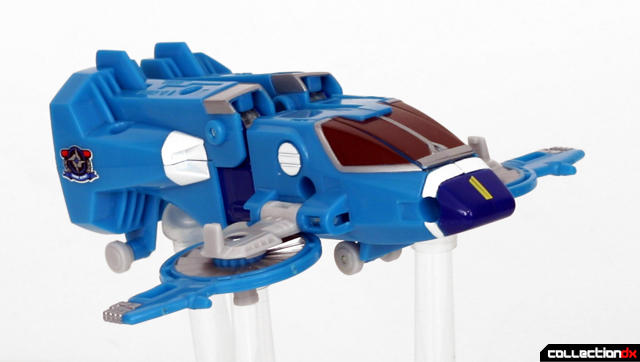 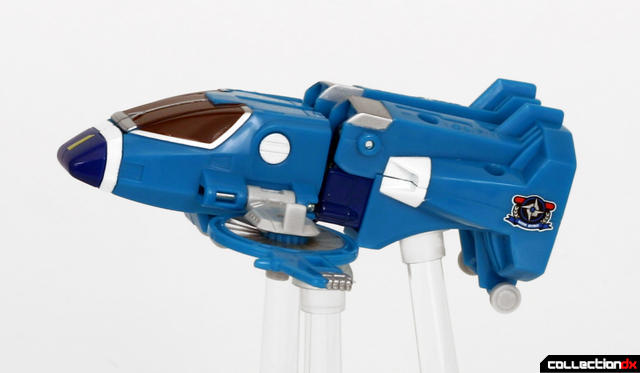 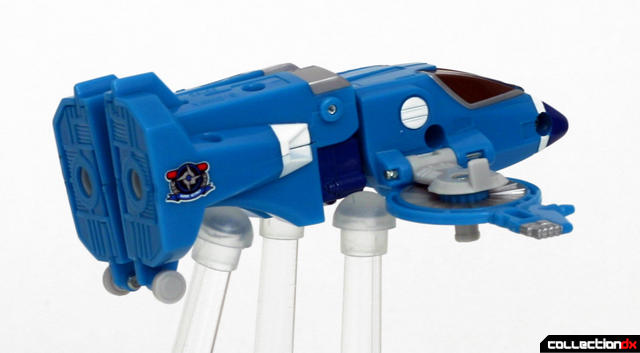 Transformation is simple but involved enough to be interesting. Bot mode is well proportioned but for the stubby, blade-like arms and shoulders. The diecast crotch and thighs lend it some heft. 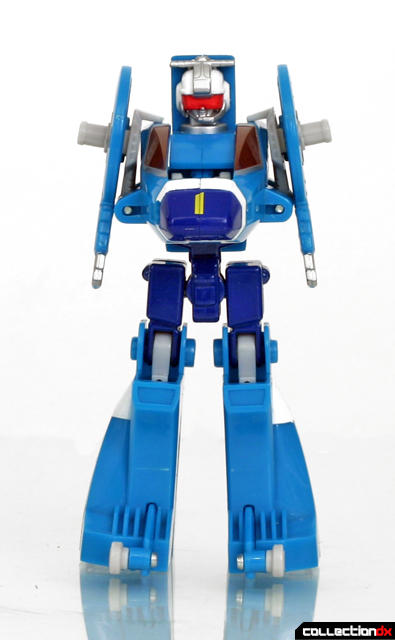 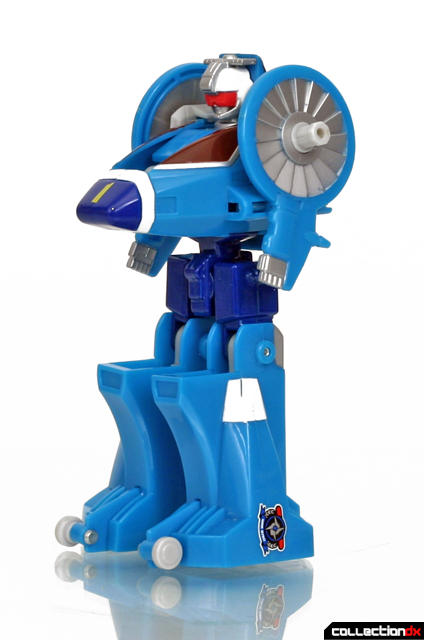 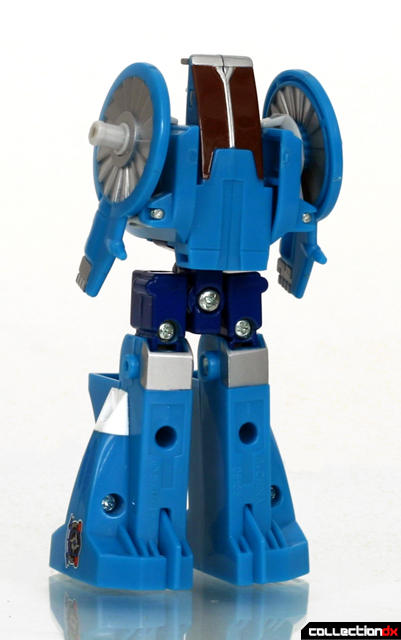 Combination into Gattai is intuitive. Folding down the cockpits and removing the rotors exposes connector pegs and slots. All the drones in the line have the same fittings, so the limbs are interchangeable across the line. 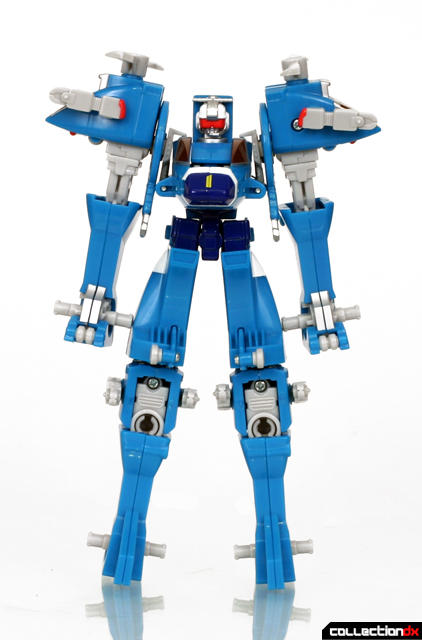 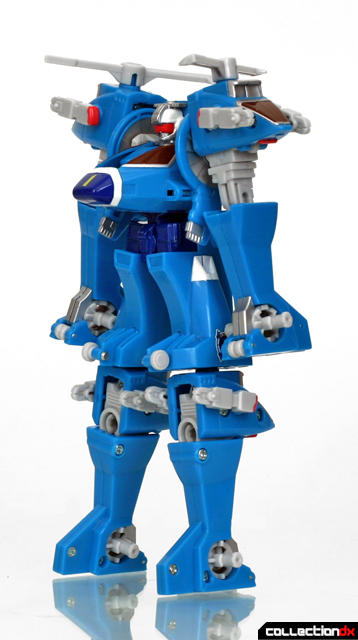 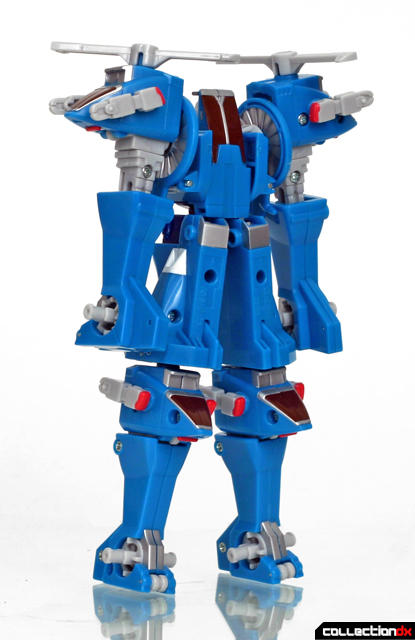 The Gattai figure is worth all of the awkwardness of the pieces. It’s still strangely proportioned, but the mannered design makes sense. 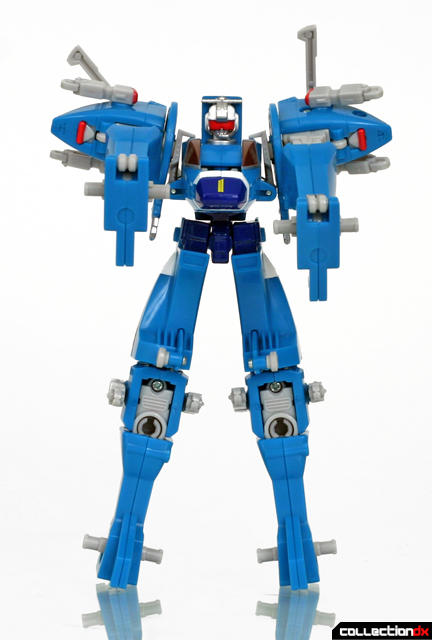 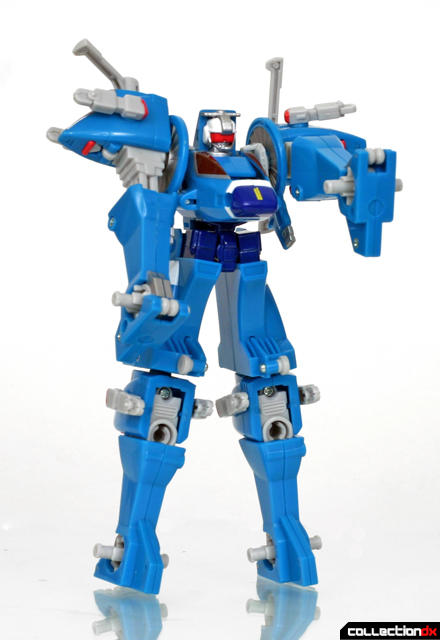 It took me awhile to warm up the MRR toys, but I’ve come to really appreciate them. Sure, the identical drones are kind of a cop out, but the toys are handsome, well-constructed, and the play features are fun and tactile. 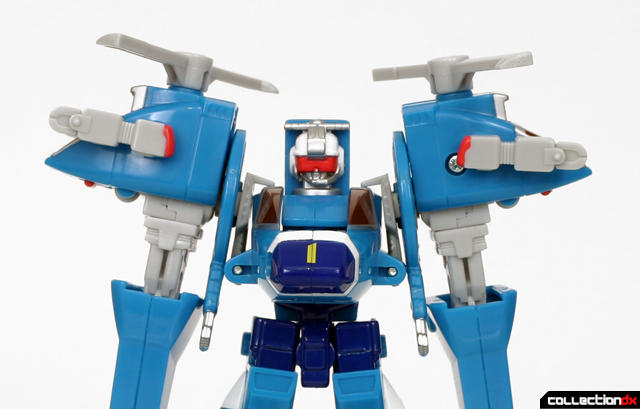 I have the Jet and Drill one in the series. Only got them out of pure nostalgia since I loved the original Fitor Gobot.