As the shop continues to run out of space, I continue to fill my time with building. Today's recent completion is not from my normal routine of Gundams but rather a Zoid. Most folks out there tend to look down at Zoids for their simplicity and others enjoy Zoids for their toyetic value. Me, I like both ways because it's a good break. The model I bring to you now is the newly released (in the US) Gojulas GIGA. To tell the truth I've been in love with the Gojulas ever since its two seconds of fame in such movies as "GODZILLA 1985"and "Spaced Invaders" but sadly I've never been lucky enough to find one. Thankfully with the sudden burst of Zoid models coming out and Hasbro's release plan I managed to find the newer version of the Godzilla brain child. 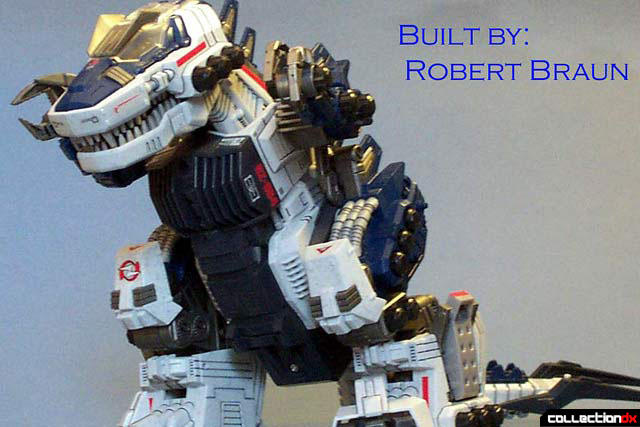 Size:
The Gojulas GIGA comes to us in a whopping 1/72 scale size, which makes it just about as long from nose to tail tip as my 1/144 scale Dendrobium (minus the extra length from the long rifle). Another sizing matter is that it's the biggest Zoid I've built to date as it towers over such giants from my collection like the Elephander and Berserk Fuhrer but matches up with the size of the Death Stinger. I could guess that it is right now the largest one to be released in the US under the ZOIDS name, but as most of you all know, it's not the biggest one of all time. Either way its still one big mutha! 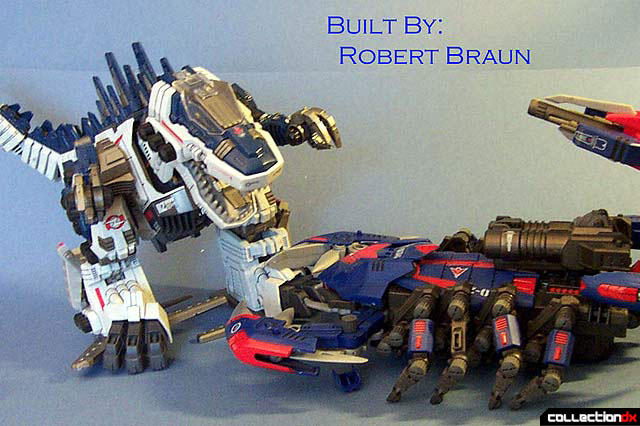 Colors:
The colors on this mad mecha monster are a rich navy blue, silver gray, dark gray, a light silver, and a very cool looking marble color that's done all the way through the plastic (rather than a surface paint job). 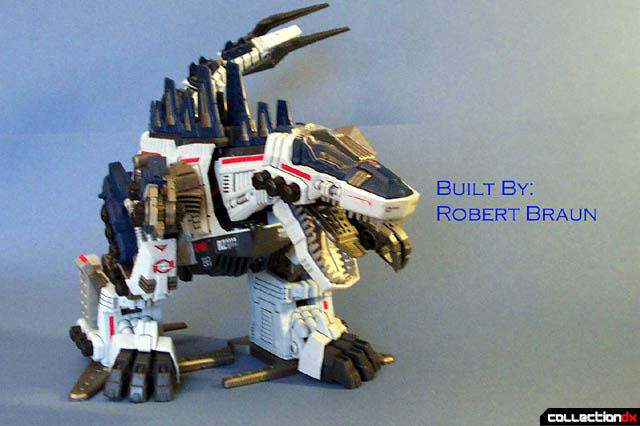 Motor Assembly:
The motor of the Gojulas GIGA is a large type that requires 2 AA sized batteries with a secondary block that uses 2 AAA sized batteries. This provides power for the sound box, lights, and movement. On the sides of the larger block are a set of tabs that are locked into the body shell and leg/gear arms. These tabs lock the motor and lights into two different modes; the first one is an upright stance that is much like the original Gojulas only the mouth doesn't open or close while the eyes light up green, also it makes the stomping sound effect. The second stance is called 'stalk' mode, where the body is parallel to the ground and the head becomes mobile; neck moves a complete 360, jaw opening and closing and the eyes/throat lit up in a red color. Also in both modes the tail sways side to side with each step. 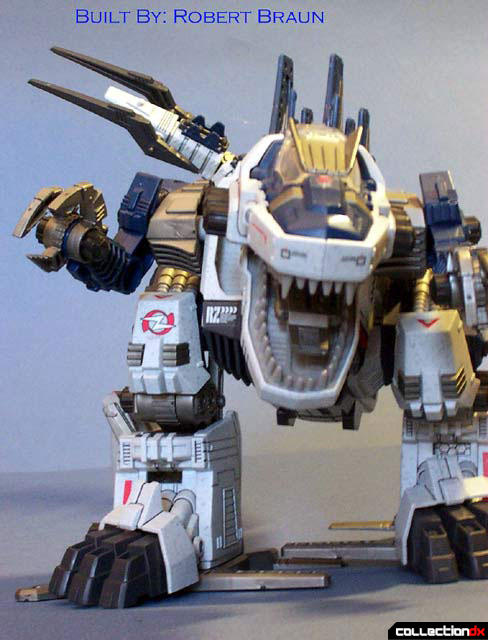 Run through of part use:
The marbleized plastic makes up the majority of the overall body and looks a lot better after a good amount of detail work. The blue parts make up the upper legs, arms, top of the head and the spines across the back and tail. The various gray and silver colored parts, as almost always (on large Zoids), make up the claws, feet, mechanical areas and weapons. Last but not least, there is the one clear colored piece for the canopy and eyes.

Body parts:
Since Zoids are solid assemblies it's hard to do a break down review like Gundam models. So I'll make the best of it.

The Head:
The Head of the G-GIGA is made up of a swiveling arm with a piston in the neck and is a full shell assembly. The neck is two side shell assembly with a flat piece on top where a small set of spikes attach. The face itself consists of a set of teeth, doubled up shell face block with the clear canopy/eyes inside, a tongue and the lower jaw. The detail is well engraved and the overall finished look is good.

Torso:
As most Zoid experienced builders know the torso is where the main battery/motor is housed. As such, you would all know that the torso consists of just a shell assembly and a series of arms that go onto the legs to articulate the rest of the body's movement (poles connected to the leg gears that lock into the arms, etc.). Across the back there is the ever so usual plate with the cut out for the motor's on/off switch, however to add on for the Gojulas there's some Godzilla style spikes that continue the set pattern from the neck. Also, the tabs I mentioned in the battery motor block are covered by a set of plates that actually trigger the mode change.

The Arms:
Notably the only serious place on the model that doesn't move on its own. The arms do however move in conjunction with the common leg/arm assembly. What I'm referring to in the DIY department are the joints at the elbows and talons. Again, the detail in the parts keep up to par and make the arms look good, not to mention a little bit of accentuated posing makes the scene better.

The Legs:
The better to stomp the competition with. The legs of the Gojulas follow the standards of large scale Dino based Zoids to the letter and somewhat more. On the bottom of the feet there are of course the step plates, a feature found in most walking action toys on two legs. These plates have on them foam contact scrubs which help it to gain traction to whatever surface its walking on and because of how low to the ground each step is, a wheel in the heel portion. As I said before, the legs are bulked up for carrying the weight from the rest of the body and do it pretty well. Alessa Savage - My friends bad stepson Sam Bourne must be punished Hot alternative babe Yemaya Gonzalez gets her latin pussy banged Black stallion Isiah Maxwell fucks hot blonde cougar Katie Morgan Fat mans hot wife Alexxa Vega fulfills his debts Mandingos huge black cock inside hot blonde Katie Morgan hanime Jessa Rhodes - Unforeseen difficulties in Modest student fucks his hot stepmother in the shower Double Penetration Porn with my friends wife Christiana Cinn My black girlfriend loves cold ice cream and my warm sperm in her pussy Young exotic girl Nia Nacci wants her best friends father Mick Blue The downside is that if the legs can't make a full motion the motor gets stalled up and believe me, if you're not careful things will go wrong. Just make sure both legs are in the exact same pose to prevent this from happening.

The Tail:
Adding to the rest of the body is last bit of DIY and geared articulation. The tail consists of five downsizing segments with the GIGA's trademark spines that go from the rear base of the motor assembly to a final tip. At the tip of the tail is a set of prongs that seem to serve no real purpose other than decoration. The DIY articulation of the tail is at two of the segments that turn upward. This articulation is there to allow the tail to drag along the ground for the upright mode and as a bonus, make the stalker mode more playful. I say playful like that because of how it looks to be having fun while chasing the shop's resident felines from room to room.

Weapons/Extra parts:
The Gojulas GIGA sadly does not come with weapons of its own. This comes much to my disappointment having seen what comes with the original Gojulas. However, as you've just read where the Gojulas lacks in its accessories it makes up with its looks. On the other hand the GIGA does come with a support base for connecting any Zoid BLOX (Z-Builder in the US) model but still its nothing really worth the time building if you don't have any of the Blox. So for those of you that like arming Zoids with whatever weapon you've got, there are however small pegs that extend off the tail and hips. Personally, the model's just as good without anything attached. 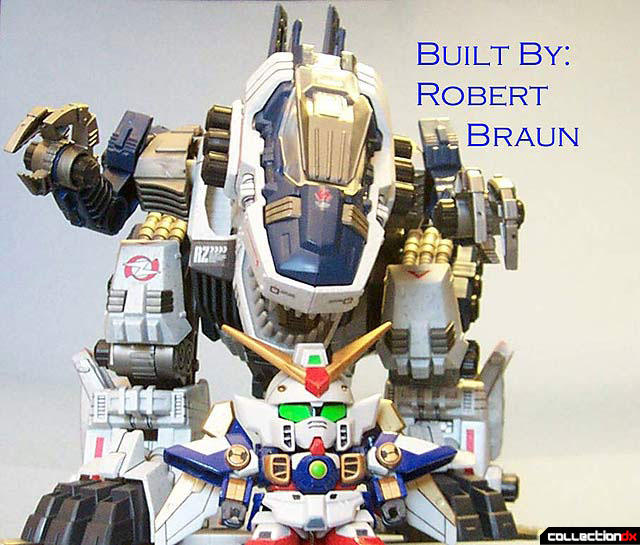 Overall:
All in all it's a good break from the Gundam department with the end result a massive Tokyo-Stomping Look Alike. The only problems I see with the model come from its mass and the lack of finding a suitable place to rest it. In Stalk mode it becomes too long and in the upright mode it's just too tall. On the scorecard, I give the Gojulas GIGA an 8.5 out of 10. Now if you'll excuse me, I have to stop my new guard dog from chasing some unsuspecting house pets.