Here's another example of me messing up and not heeding the advice of a friend. When this statue was released back in 2002, it was recommended to me that I get it. But again, I wasn't into statues at the time and I passed. And unlike the Uncle Boris statue, I had to pay a premium to get it on the aftermarket later.

Vampira, real name Maila Nurmi, was a TV horror host in the 1950s and generally regarded as the first in that tradition. Unfortunately, there's not much footage remaining from her show, but here's small clip.

Of course, she might be better known to modern audiences for her role in the 1959 camp classic Plan 9 From Outer Space...

...which was in turn made more famous by the movie about it's famous director, Ed Wood.

Of course, the punk rock crowd may have heard of her from the Misfits song that they wrote about her, which I quote in the front page summary.

Anyway, enough about history, what about the statue? Well, it's beautifully crafted by Thomas Kuntz and stands about 14.25" tall. The likeness to Vampira is superb and the paint job excellent.

The fingers on the right hand are particularly impressive. I have no idea how they managed to make a mold that can achieve that pose. Check out how the fingertips are touching the chest, but the rest of the hand is raised. 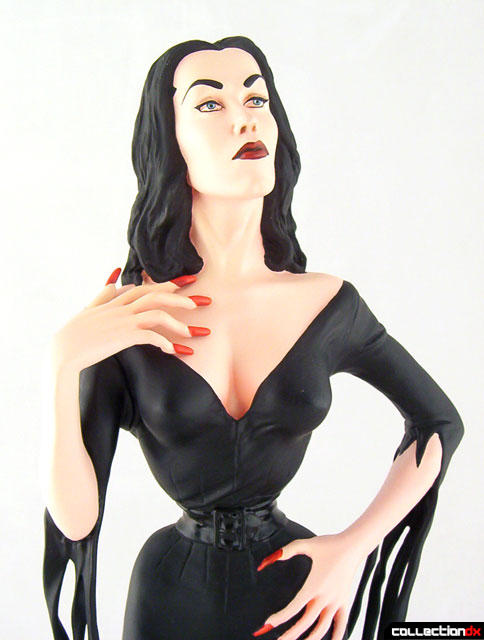 The cloth hanging from her arms is also impressive and being so thin I'm always being extra careful not to bump it into anything for fear it might crack. The statue is molded right onto a circular base. Beneath the base are four little felt backers to cushion the resin against the surface it rests on. Nice touch.

The statue comes in a nice box with a picture of it on the front, a painting of it on the back and a portrait of Vampira on the side, along with a comprehensive biography by the artist. The bottom of the box, as well as of the statue, tells you which number you have. Mine is number 51 of 1000.

Maila Nurmi was a trailblazer and a beloved figure in the horror community. She passed away earlier this year on January 10, 2008.