(If you have read my CollectionDX reviews you will see that most of my review subjects are from toys or models that I have bought back when I was a kid in the 1980’s. Having been a collector back in the 1980’s, I had a lot of great items that many people had forgotten about and that were worth taking the time out to review. I still have a lot of vintage items to review, GI Joe alone could take another decade to review all the pieces I posses but I knew sooner or later I was going actually take the plunge and seriously collect Japanese toys again. 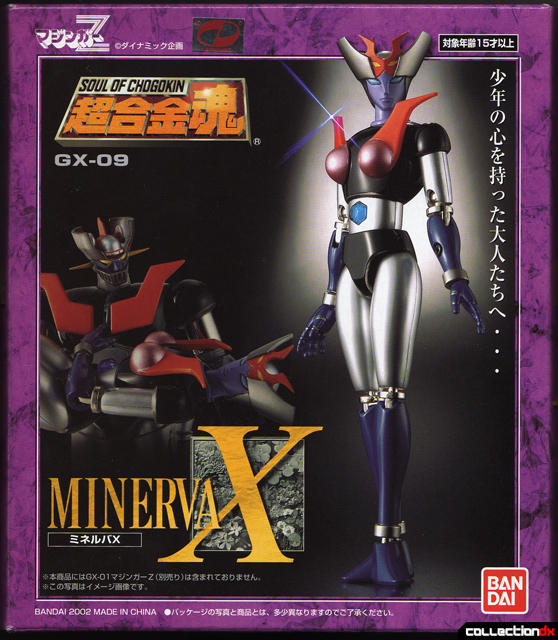 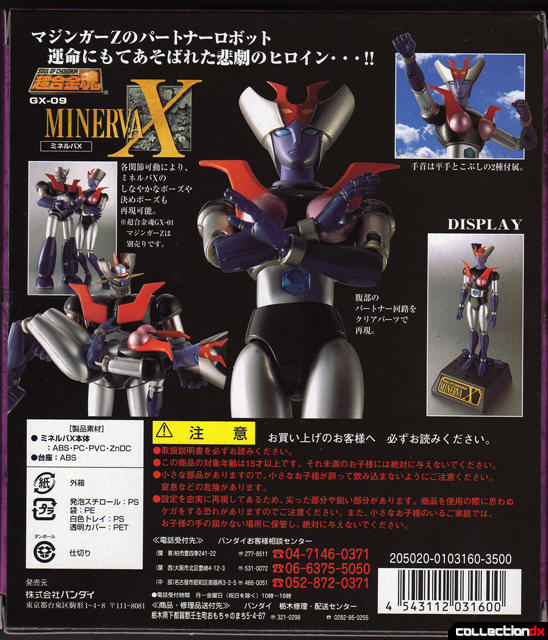 As a kid I just bought any toy that was Japanese but as I got older my tastes begun to get refined and I settled on a few lines that have most influenced me over the years: Spiral Zone, GI Joe, Mazinger, Gatchaman, Macross, Godaikin, Studio Ghibli, MS Gundam & Zeta Gundam and early Super Sentai. Sometime around 2001 I sold off about half of my Japanese and American toy collection on eBay and begun to focus on my taste on a few lines that I really cannot live without. 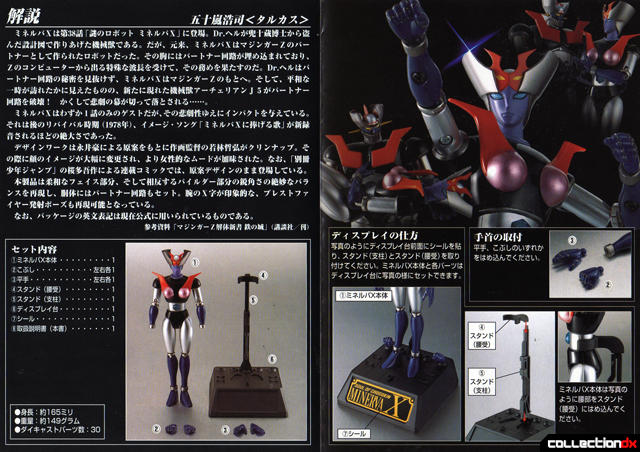 I am still a big model kit buyer and builder but when it came to Japanese toys proper I have very much held off as long as I could, but with so many great toys being released and being reviewed here on CollectionDX I know that I was going to have to make a choice if I like it or not. 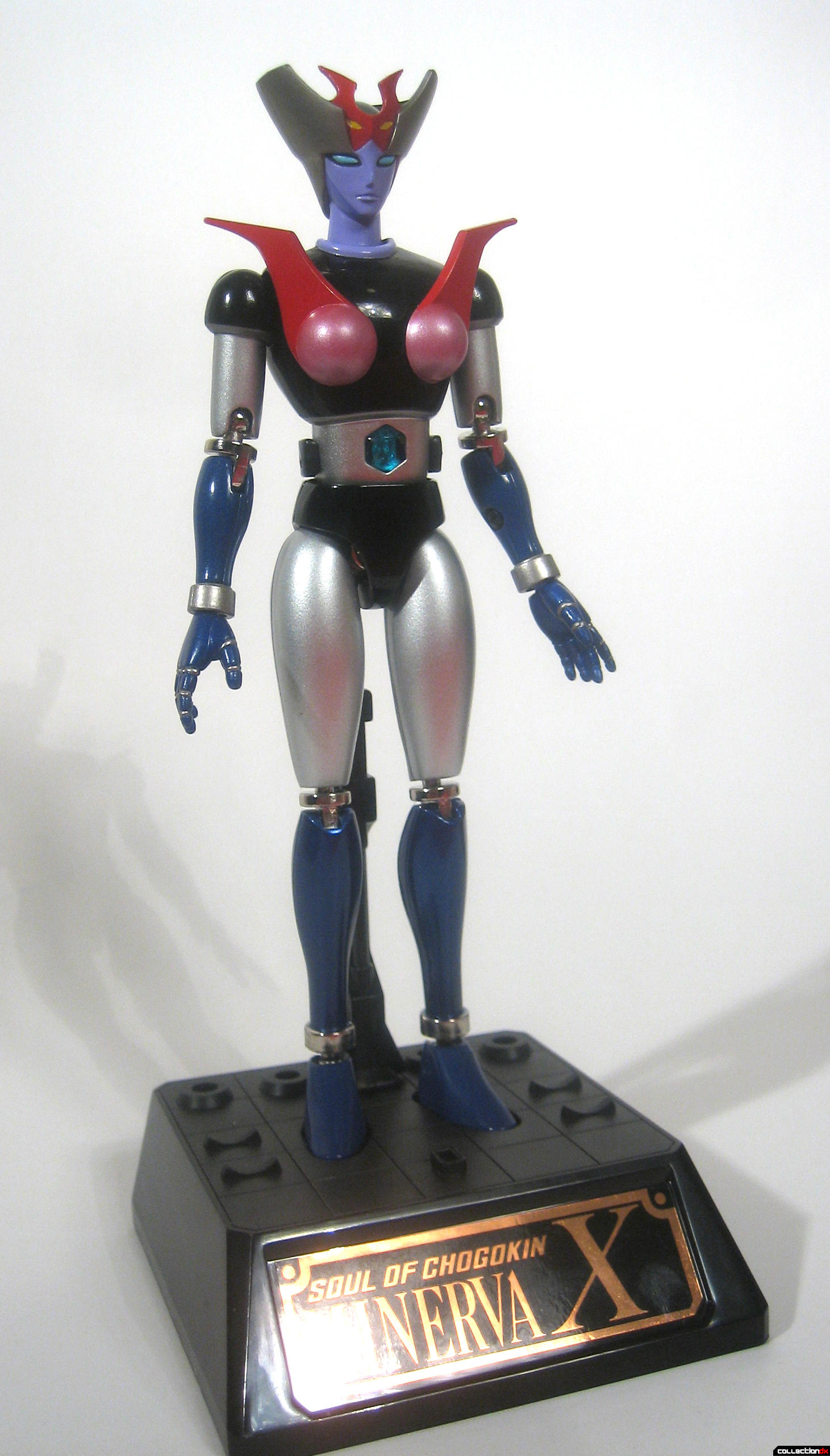 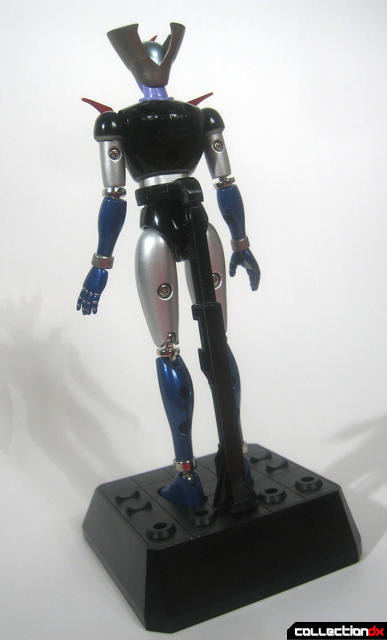 Last week, after a long careful debate I finally settled on collecting Bandai’s Soul Of Chogokin line of releases. SOC seems to scratch that itch that I have for Japanese robots. When I think of Japanese robots I think of die-cast metal content, rocket fists, shooting missiles, foam trays, colorful boxes, exclusive releases and a hi-brow attitude. Also most of SOC releases cover my favorite era, the 1970’s and 1980’s. SOC meets those expectations and more. No toy line is perfect and I know SOC has its dog releases but generally speaking from what I have read this seems to be what I was looking for.

Even when I found out about SOC back in the 90’s I knew we were going to have destiny together but it was just a matter of time and when. So here it is friends, my first Soul Of Chogokin review.)

You have got to love Go Nagai’s character and art design. With a few strokes of his paint brush and ink pen he’s created a world that personifies what I love about Japanese art design. Go Nagai has always been cutting edge and controversial and most of his fans are always waiting for what his next project will bring. In the USA most kids watch Tranzor Z on TV but what blew me away was when he made a special one-off Mazinger Graphic Novel for the US market called Mazinger published by First Publishing in 1988. Who knows if it was a big seller but this was the first time I saw Go Nagai unleashed that only Transzor Z hinted at. Somehow I knew there was something more to Go Nagai than Tranzor Z and this was it. 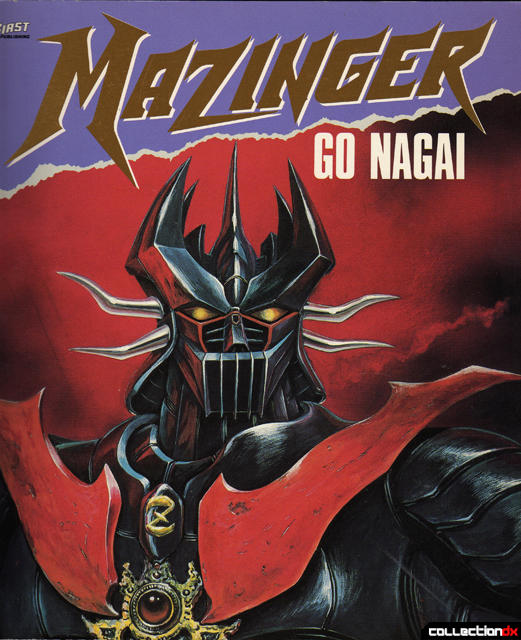 The story features a Mazinger Pilot, Major Kabuto who gets transported to another dimension when a bomb explodes during a battle. Kabuto gets transported to another dimension where a princess is waging a war against Lizards men called ‘Zards that are trying to kill off the last of the humans. Mazinger joins the battle with the princess and afterward offers herself to marry him. There is just one problem, the Mazinger is the size of the humans in this dimension, making the Mazinger pilot fit in the palm of her hand. Not only was the art beautiful (it was in color) and featured the typical Nagai violence, cruelty and fantastic Mazinger designs but the princess was bare-chested during the entire comic! 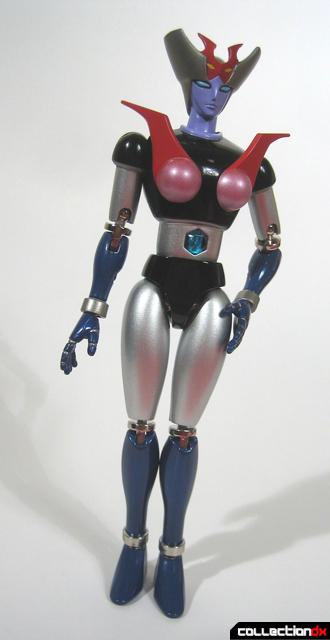 The sensuality of Go Nagai’s character design has never been understated in his projects over the years, from Cutey Honey to Lady Devilman if there is going to be a female character you know she will have at least an underlining but more often an obvious sensuality about her. Minerva X from Mazinger Z is such an example. 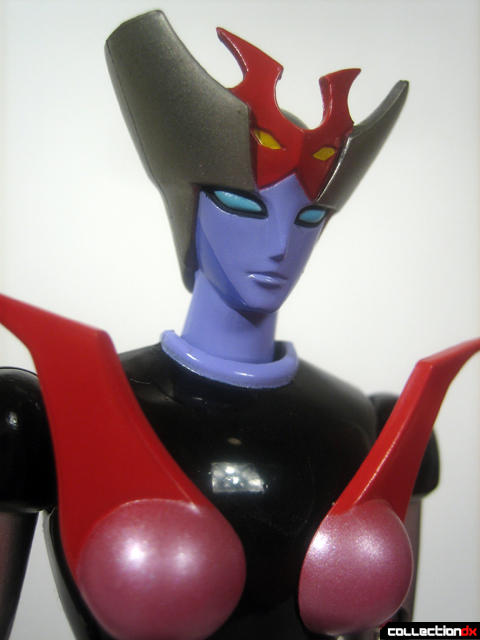 In Mazinger Z, Minerva X was not like the other lead “Lady Robots”. While the other three robots, Venus A, Aphrodite and Diane A are all piloted Chogokins; Minerva X is actually a combination of remote control operated and an advanced AI computer control. Minerva X has made an impression with Go Nagai fans as she was only seen in one episode. Redeveloped by Dr Hell to destroy Mazinger Z, Minerva X soon develops a “thing” for Mazinger Z and begins to protect Mazinger Z in battle, which sadly leads to Minerva’s eventual destruction. In a sense, Minerva is the edgy misguided bad girl with the heart of gold and that’s what I like about her. Heck, she even cries!

Now that's Melodrama at it's finest!!!

When I received my package from Japan I was not let down. First off I was surprised how tall the Minerva figure was. Do not think for one minute that the small packaging features a small figure, Minerva fits snug in the box with no area wasted and the figure is a good size when pulled out of the package. The second thing I noticed was how heavy the figure is, besides the forearm, hands, red chest flashes and head, this figure is pure die-cast medal and boy does it feel good! That’s how a Japanese toy is supposed to feel like! Popy Lives! 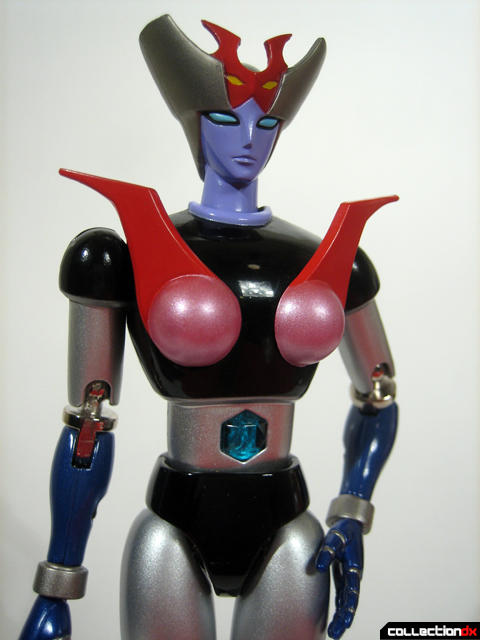 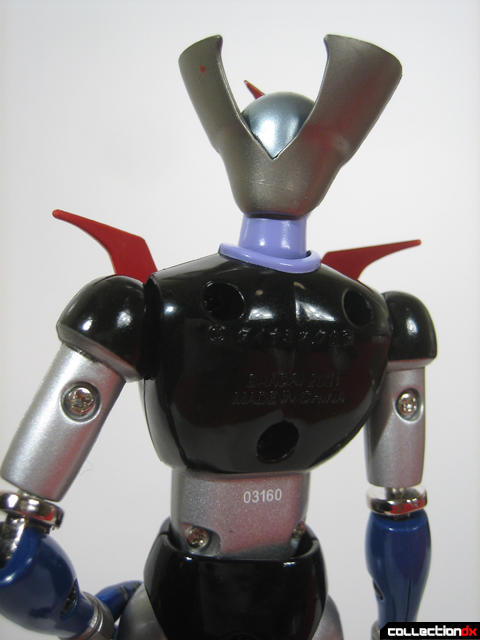 The sculpt is amazing, capturing the ethereal beauty and soft sensuality of Go Nagai’s design perfect. The poseability is great with chromed metal joints throughout the figure. My only problem is that the head cannot be posed to look up, but as is, it is just fine. 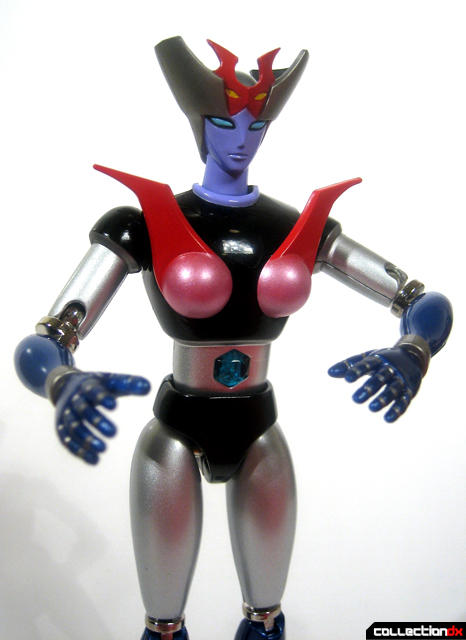 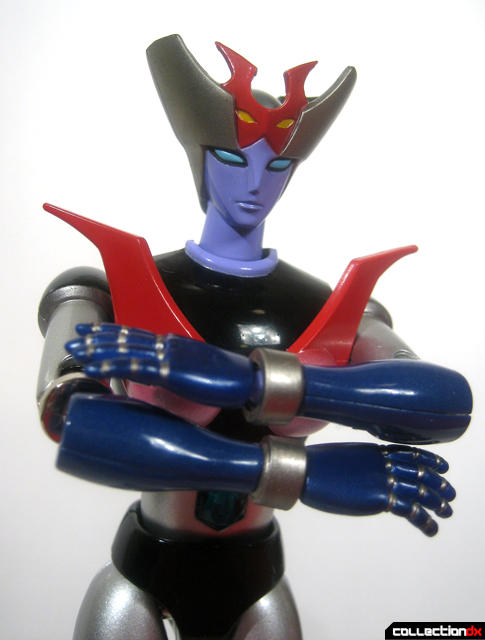 The paint is beautiful, especially the metal flaked silver/blue paint on the leg, body and arm area and the gloss black used throughout. This is a first-rate toy as the craftsmanship is perfect. I also admire the head sculpt of Minerva, with its black eyeliner, red devil face and the absolutely beautiful silver blue paint that is used for the top of the head. The clear blue gem on the stomach is a nice touch and adds a nice visual to the figure. 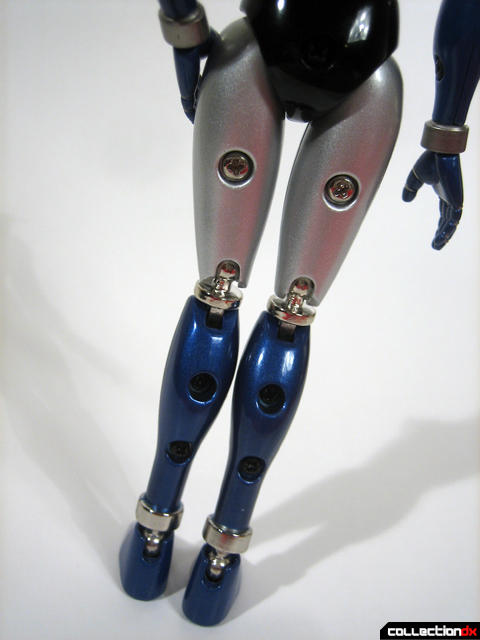 One complaint that I have heard from collectors is the lack of accessories that Minerva comes with. This figure only comes with two sets of hands: a set of fists and a set of open hands. I like the open hands as each finger is molded apart and silver is painted in the finger joint. Perhaps it could have included a weapon or accessory for another Mazinger SOC release but as is I am neither here or there about extra accessories although including the bouquet of flowers that Mazinger Z gives her would have been cute. 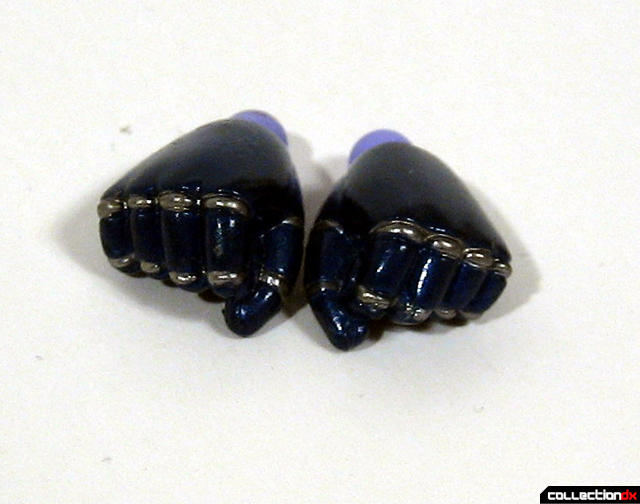 My only real complaint is how the hands are attached to the figure. The hand is manufactured out of rubber and the ball on the end of the hand is pushed into the wrist. Simply stated, in so many years of pulling the hands in and out that the ball is going to snap where the ball meets the hand. The figure should have a rubber ball in the forearm and the hand should have a prong that fits into the hole in the ball. That is how most all the Gundam model kits are made and they should have brought that system over to this figure. 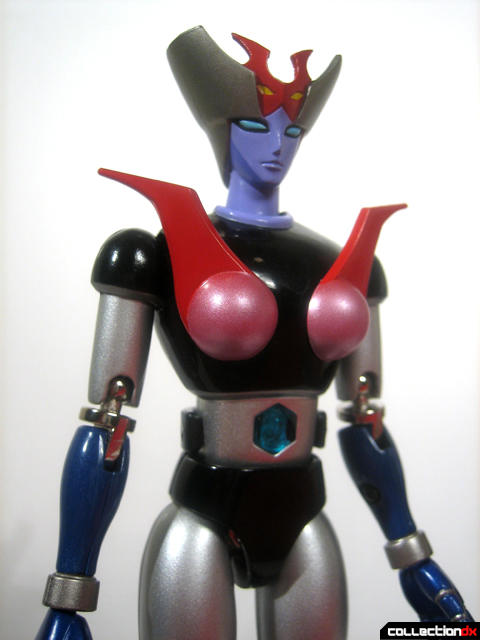 I have never been a huge fan of SOC stands, as I believe each figure should have its own uniquely sculpted stand. Minerva includes a generic stand and a sticker sheet is included to be applied to the stand to denote that it belongs to Minerva. But the stand does what it's designed to do and holds the figure firmly.

This is a fantastic figure and a must own if you are a huge Mazinger or vintage Popy fan like myself and it easily stands out in the display case among your other Mazinger’s. Minerva X makes a great SOC entry level purchase as it was only $55.00 with shipping from Japan from the dealer I bought it from on eBay and is worth every dollar I spent on it. I am looking forward to purchasing many more Mazinger related items in the SOC line. 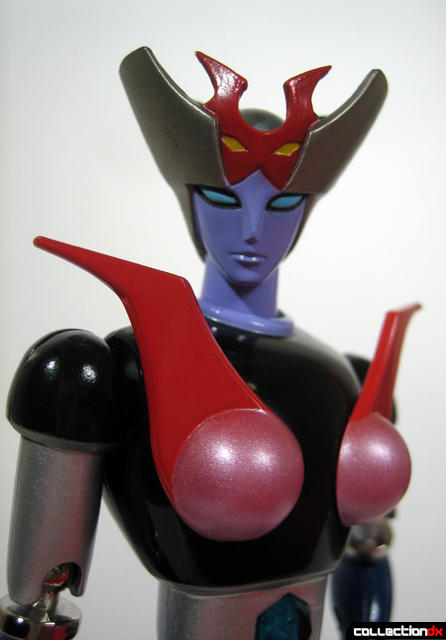 ... in its 09 version, then I recommend the Black Minerva kit from Bandai. A great piece of the same character in its dark/goth winged version. Same quality, very beautiful paint work and including articulated dark wings. Mmmh, I putted a pic in my gallery as far as I remember...

Thanks for the heads up! I saw that version as well and it looks great, Hopefully I can pick one up soon. I know it was a premium so I shouldn't wait to long.

I always thought the Maz Ladies got short shrift. If you get past the idea that you're playing with a female robot doll with rocket propelled breasts, you can appreciate them for the top-notch gokin they are. Each lady is an excellent gateway drug to SOC (was for me!). Once you physically feel what modern gokin can be, you'll be hooked. Leo, seriously pick up Dancouga. It's dated by SOC standards, but it will blow your mind (except for the head/bird, which sucks).

I've seen listed on ebay several that say Mineva X rather than Minerva X (Missing the R) on the box and on the display stand. Is this an earlier version that they messed up the spelling or possibly a bootleg? Just kind of curious.

but I will go with what's written on the Box in Romanji by Bandai although both are correct.