You may not recognize the character, but what you are looking at is sort of an unofficial mascot of CollectionDX. This figure has been on my desk as I've written every one of my reviews. Always watching, always knowing. It feels like we've been on a long journey together.

That Journey started in 2003 with a visit to Toy Tokyo during my first trip to Toy Fair in New York. I didn't know much about import stuff, and I just grabbed all kinds of crazy stuff out of context back then. This screaming kid in a skeleton suit with snot and poop fit the bill for me right away. I knew NOTHING about the character for years.

Makoto-Chan is a character created by legendary manga artist Kasuo Umezu. He starred in a series of gag-manga from 1976-1981. Planet Toys in association with Artstorm produced a series of dolls featuring Makoto-Chan in different outfits from the Manga. This skeleton version is number 5 in the series.

The figure comes carded, and as you can see over the years the bubble has yellowed. 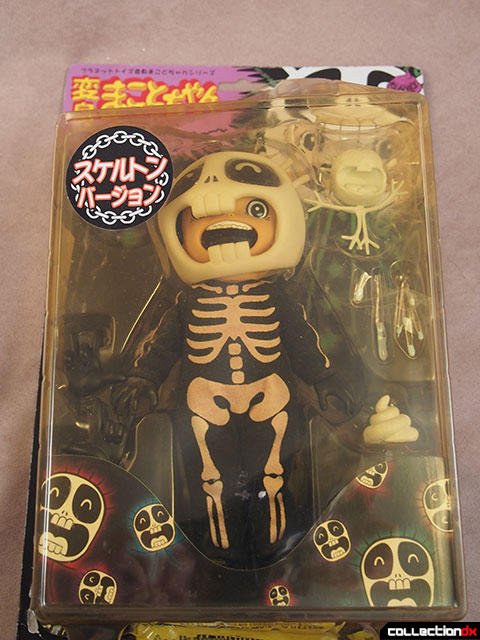 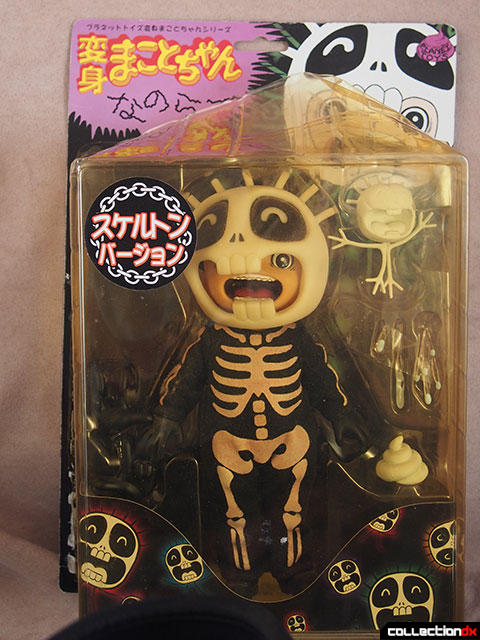 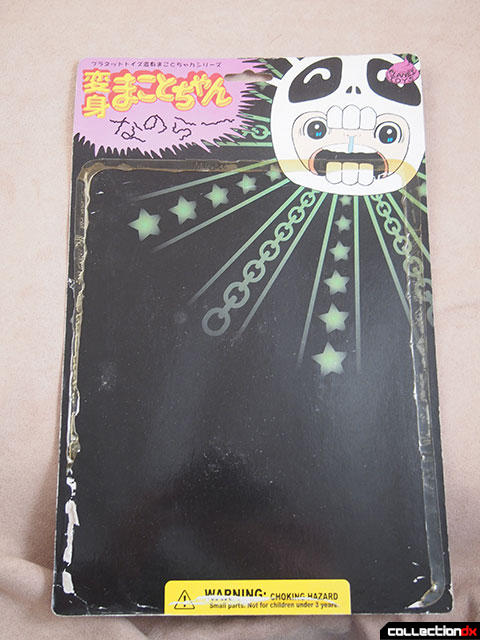 The back showcases other Makoto-Chan merchandise released in the same wave. 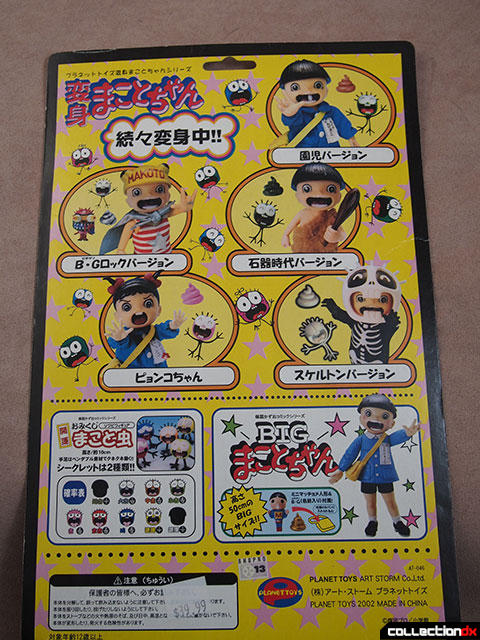 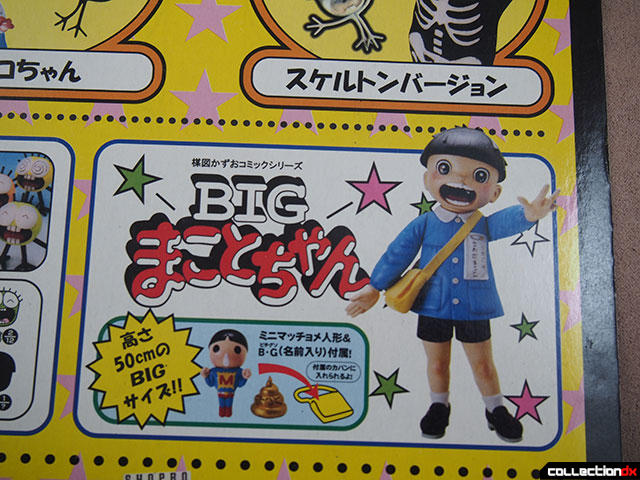 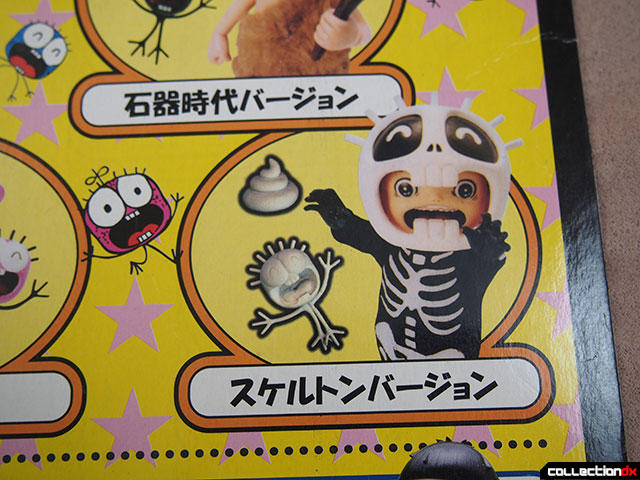 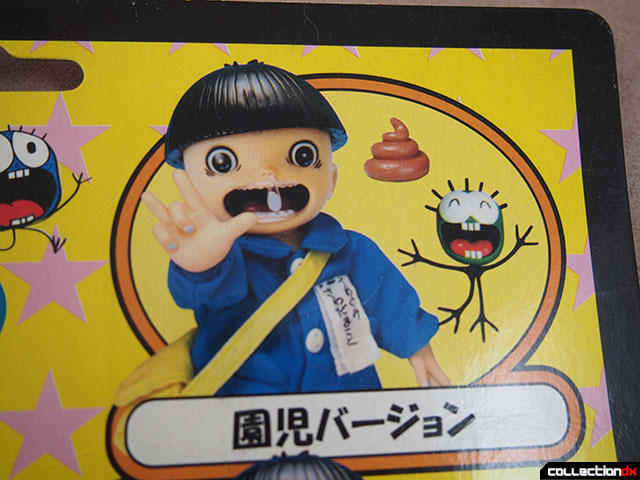 The doll does not like to stand on it's own, so I recommend use of a stand. The toy does not come with one. 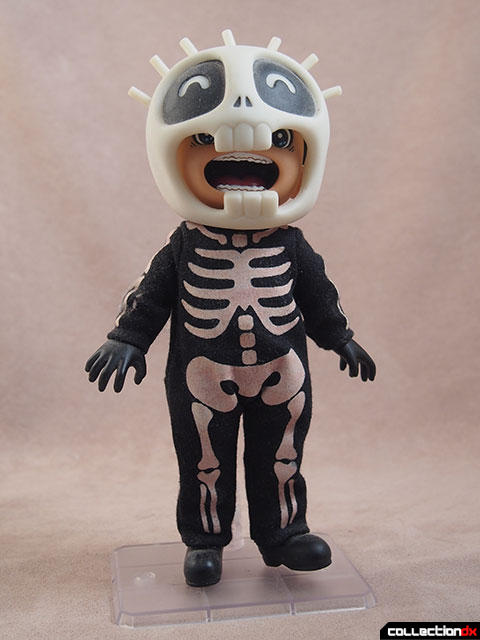 Makoto chan is dressed in some sort of halloween costume. The Insect Skull mask is a soft rubber that glows in the dark. The costume is fabric and the printing also glows. It used to glow more but the years have taken its toll. 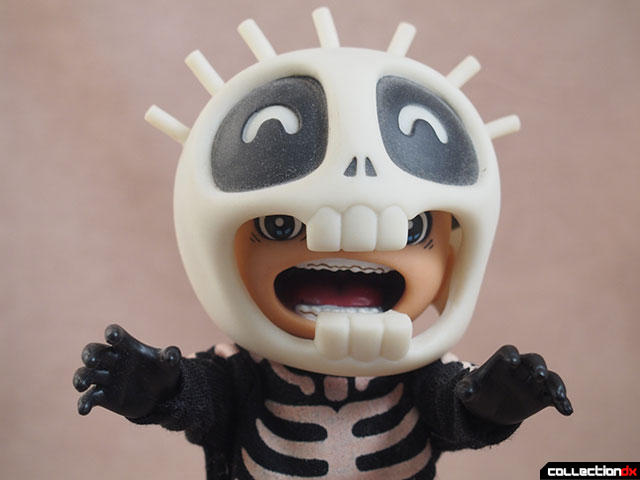 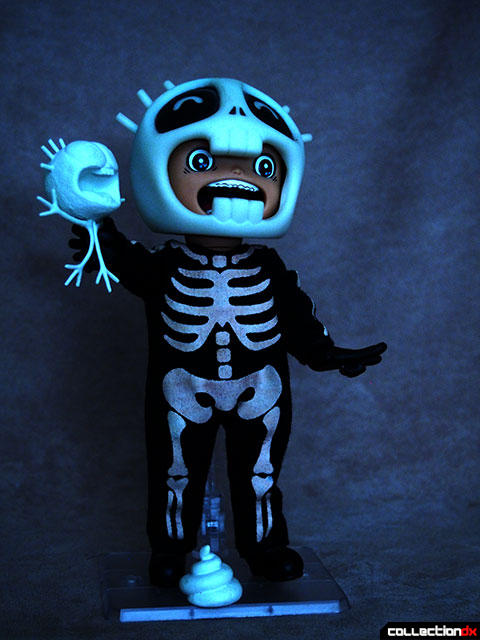 The body underneath is a simple doll body, with movement at the head, shoulders and legs. The hands are interchangeable. These ones are sort of creepy. 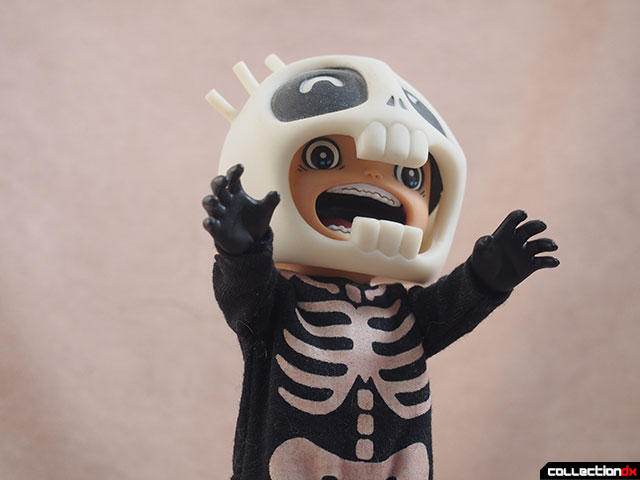 Without his mask Makoto-Chan is messed up looking. I love it. He's in a perpetual state of screaming or something. 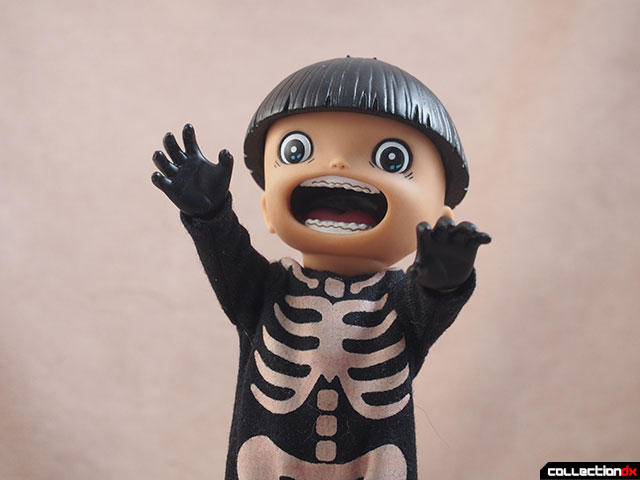 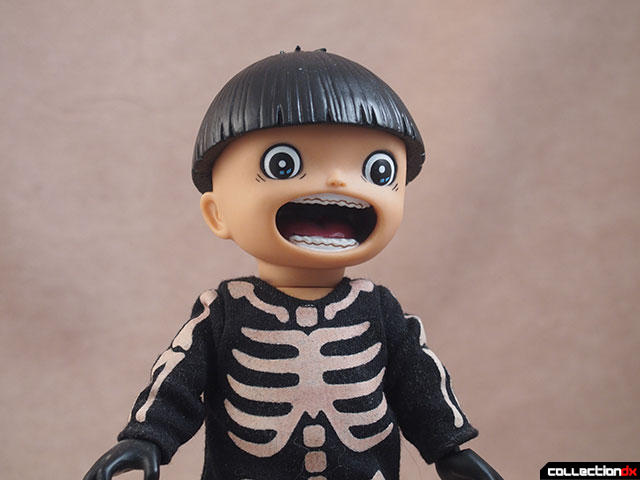 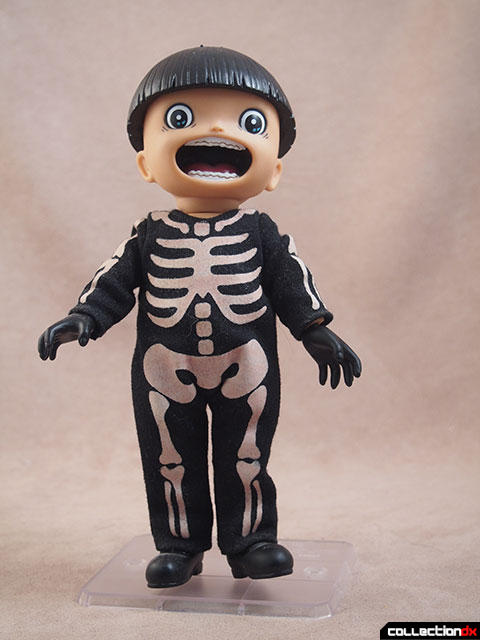 The other hands are interesting. One hand is a signature gesture called "Gwashi!", which is a hand sign made by pressing the middle and pinky fingers down while leaving the other fingers sticking out. The other gesture, which is basically the sign-language sign for "I love you", is called "Sabara". 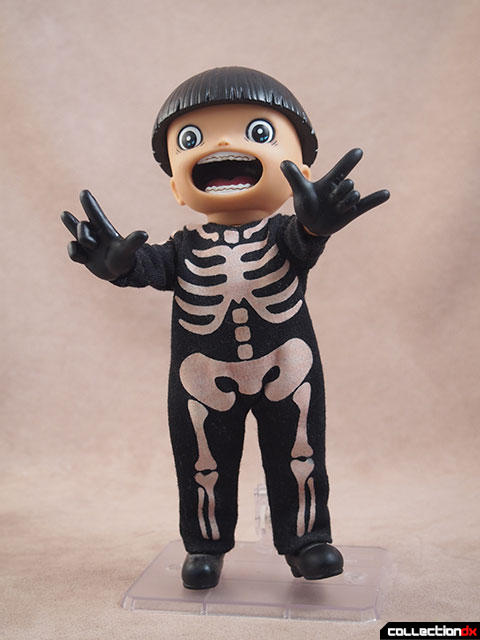 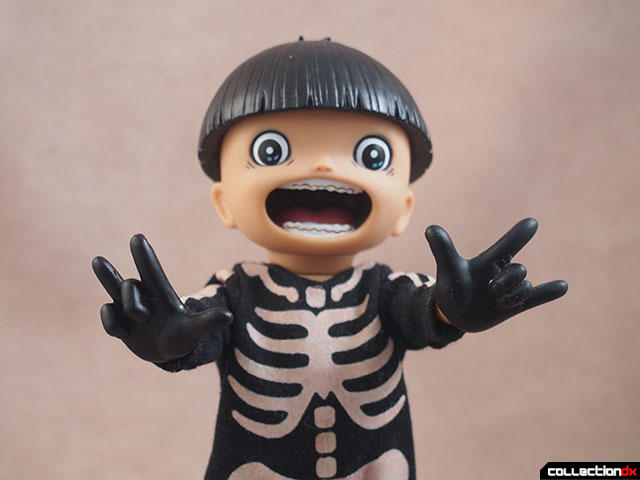 Then there's a glow in the dark pile of crap, called B · G (Bichiguso). No idea on this one. 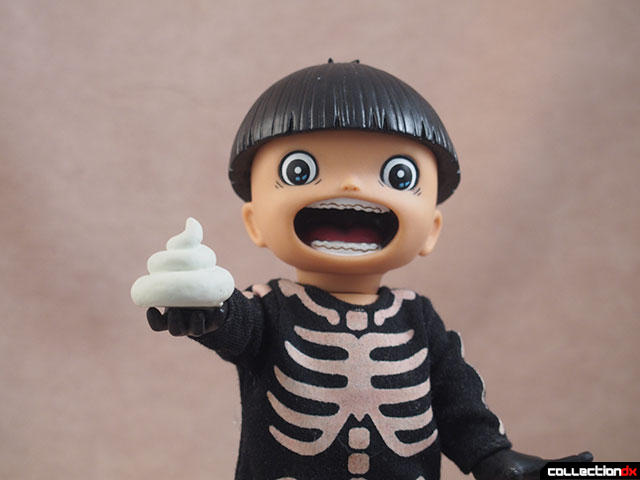 Makoto-chan is often depicted with a runny nose, so three pieces of molded snot are included. Each is painted with a bit of glow paint. 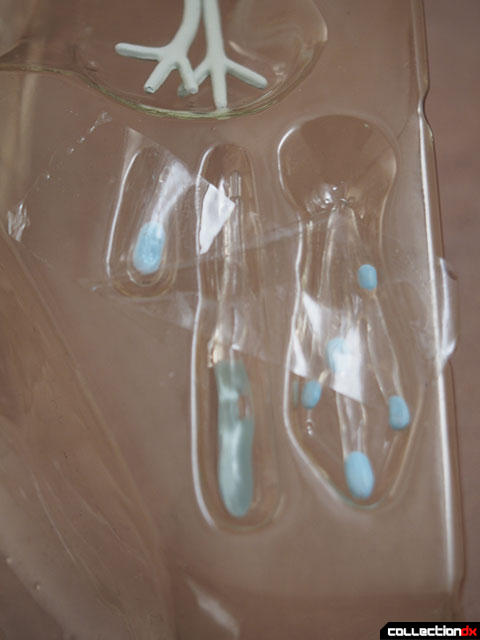 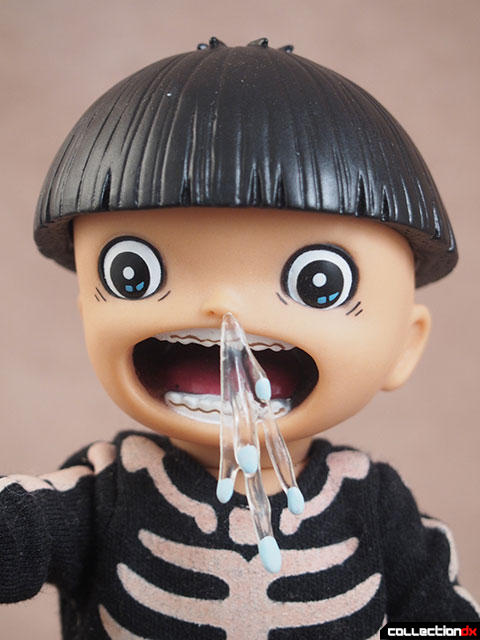 Finally, there's this thing called "Makoto insect" and it too glows. There's a similarity between the head of this thing, and the helmet Matoko-Chan wears, but I don't know what the connection is. 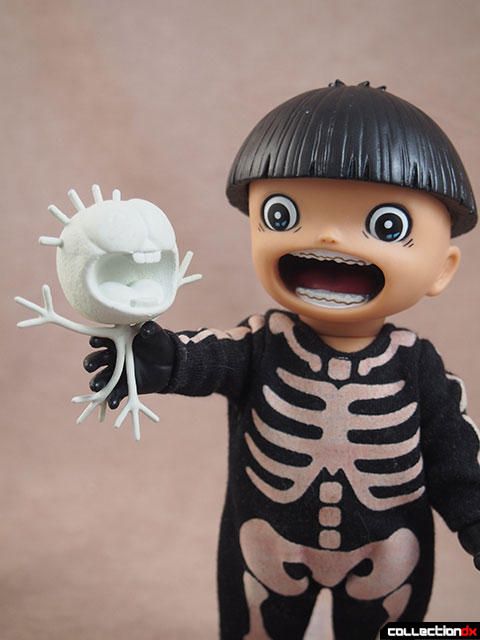 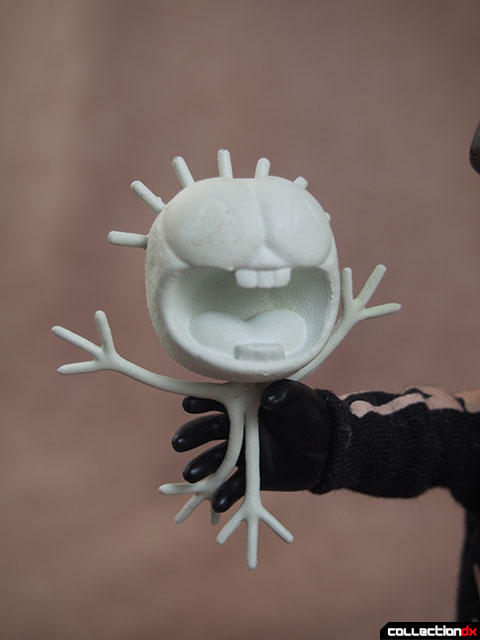 As of 2015, Matoko-chan's reign has come to an end, and back into storage he went. Who knows when we will see him again?

...I used to see him in the Hobby Japan magazines I occasionally picked up on my trips to Japan and always did want to know a bit more about him. Guess the poop is just going to have to remain one for Mulder and Scully, though...!

That's adorable! I'd totally buy one of these.

Buy one if I known sooner