Back when Mobile Suit in Action was THE Gundam toy line, a lot of designs were covered. So it's no surprise that almost everything featured in Mobile Suit Gundam (the original TV series) got a figure to represent it, including this machine. 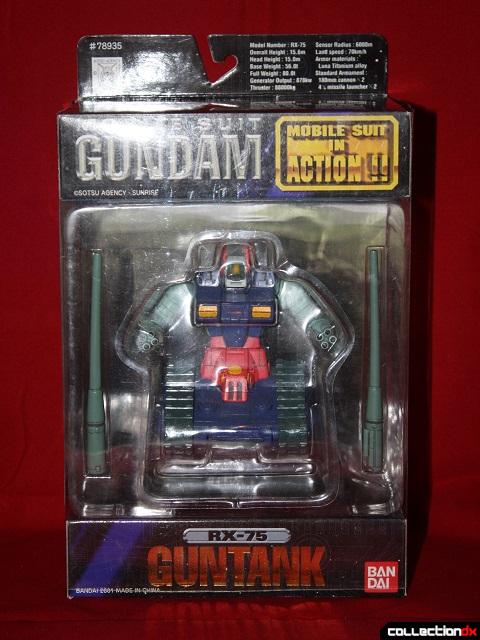 I was born in 1983, and wasn't exposed to anything Gundam until the late 90's, so I can only imagine what the perception of the RX-75 Guntank was back in 1979. It was an oddity among the super robots of that era and its own peers. All this time later, it is still as unique, because you don't really see its influence in too many places. And while that's kind of sad, it's also sort of cool. 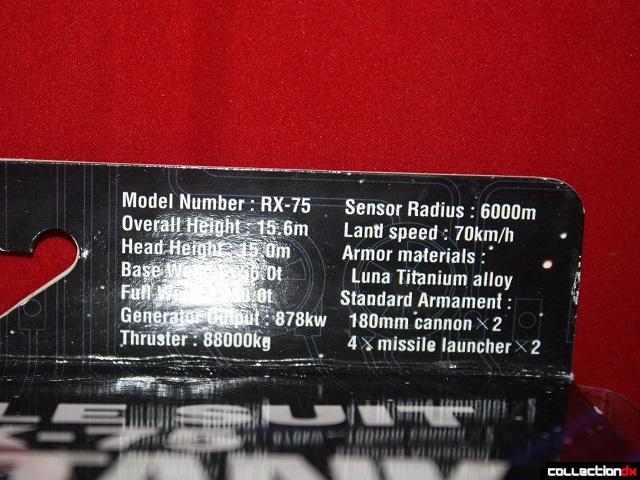 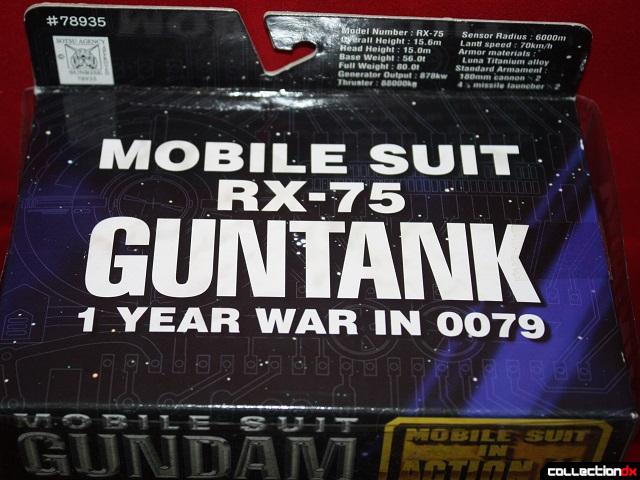 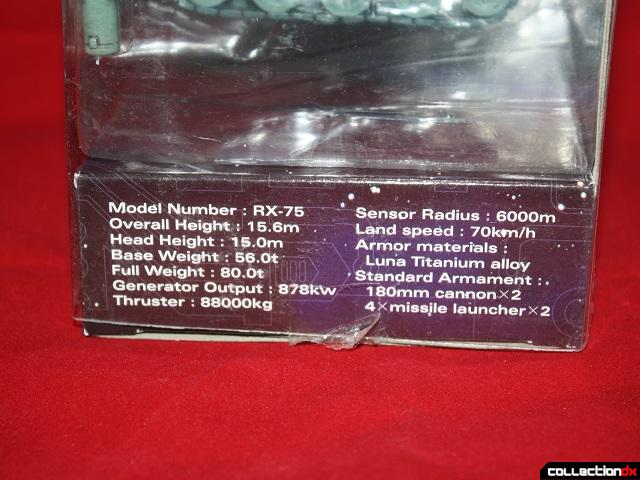 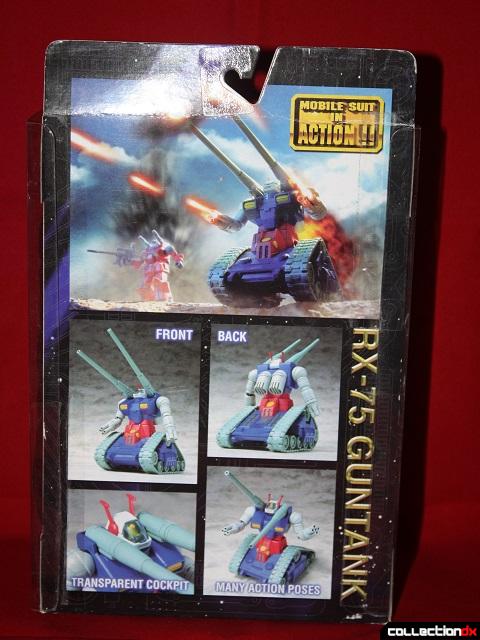 Cool is the key word here, as I look at the MSIA packaging. Sort of simple, but effective, showing off the toy and its potential for glory. And I always appreciate specs, seen up top and on the sides, especially for something that's as grounded as Gundam. The back shows some photos too, further inspiring the thought that this could be awesome. 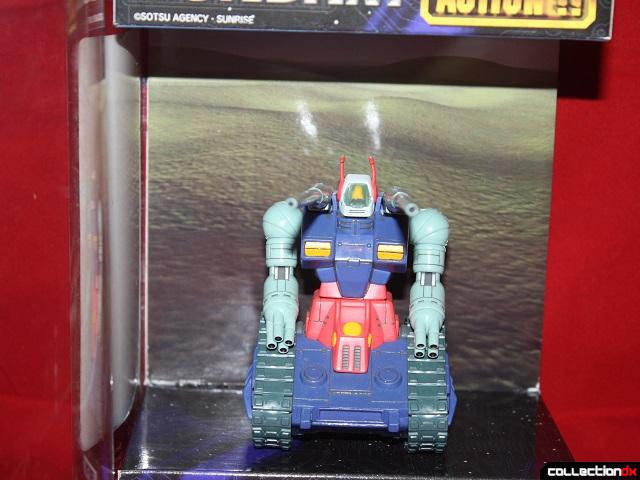 The single inner tray contains the Guntank and its two accessories: its shoulder cannons. Once attached and the tray removed, you've got a nice little diorama and stand to display upon. But this is a toy, so more fun will be had. 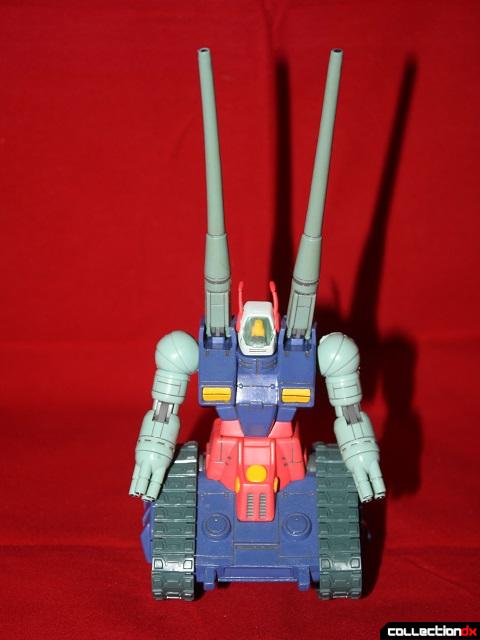 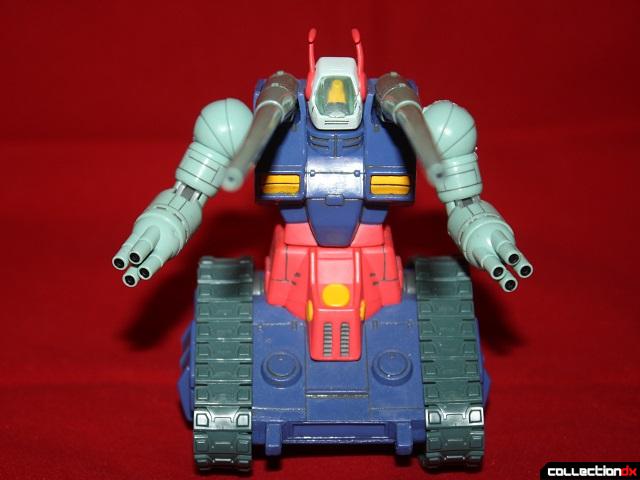 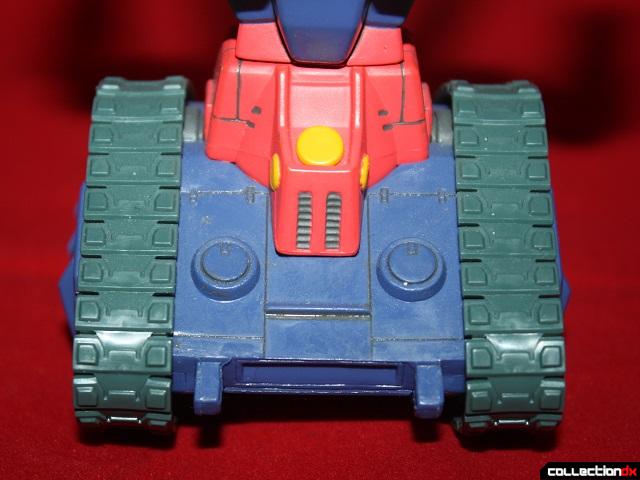 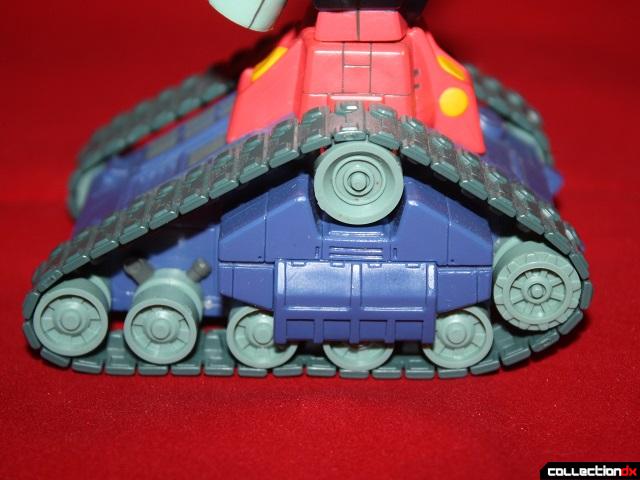 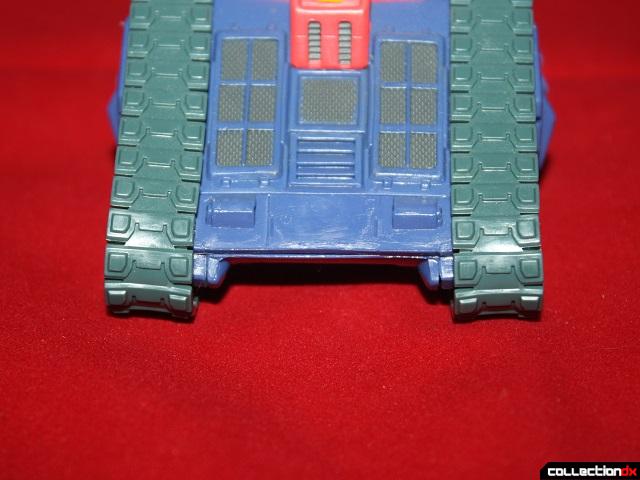 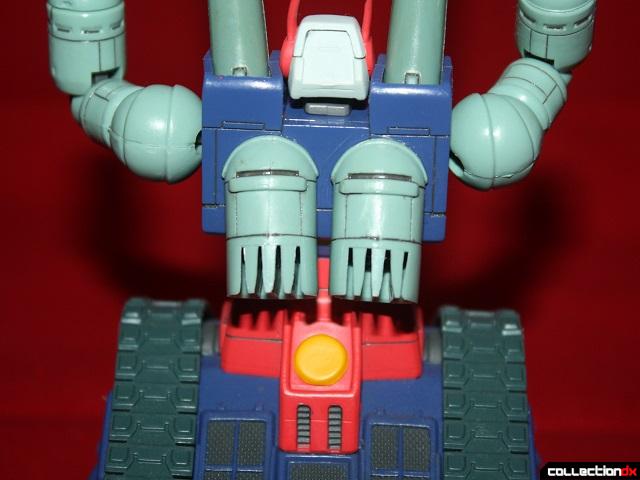 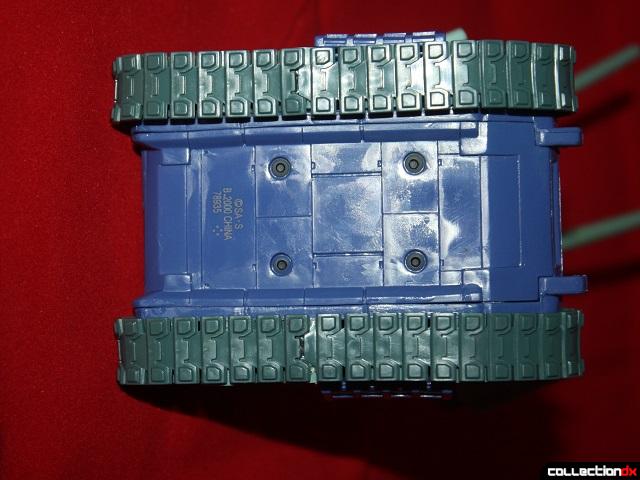 The Federation wasn't the first to field a mobile suit in the One Year War, and they didn't come up with the most designs either, but what they lacked in quantity and variety was made up for with quality. Sticking to TV continuity, they began Project V to counter the Zeon threat and produced three prototype mobile suits, each with a specific role in mind but also able to work together and be partially interchangeable. The first of these is the Guntank, a hybrid of a tank for the base and a humanoid body for the top, built for long range fire support.

First of all, this thing is solid. It's a brick in the sense that it feels like one and it should, because the Guntank is figuratively and literally a lumbering tank. The shoulder cannons raise and lower about 90-degrees. The head is on a ball joint, but between the collar and cannons, can only move so much. The shoulders are ball joints, the upper arms swivel beneath them, the elbows hinge 90-degrees, and the rocket launchers spin 360-degrees. The waist rotates about 45-degrees to either side.

The tank treads are separate pieces, but they don't roll. It'd be nice, but at this toy's low MSRP, I can see why that aspect was skimped on. It's also another reason for people to buy one of the model kits. The details are plentiful with lots of sculpting, discernible parts, inked panel lines, proper paint, and lots of texture. There's also a pilot figure inside the head. All this makes for a very authentic feeling Guntank. The only flaws on mine are some parts of the back thrusters being slightly bent out of shape, which is how they came. 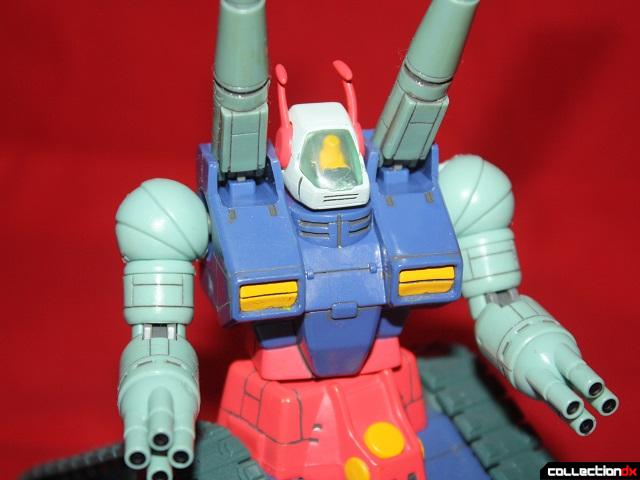 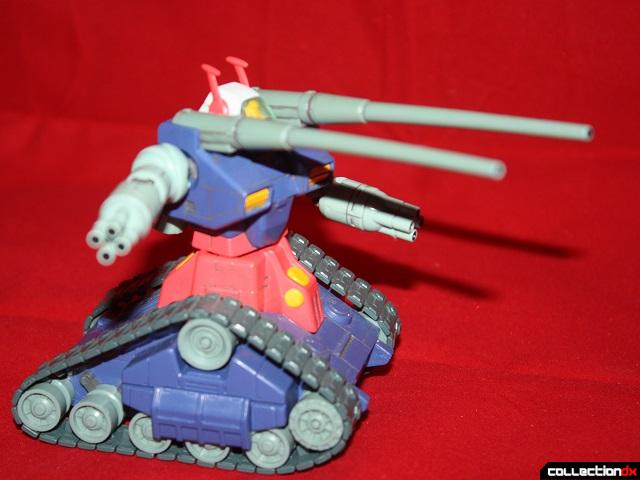 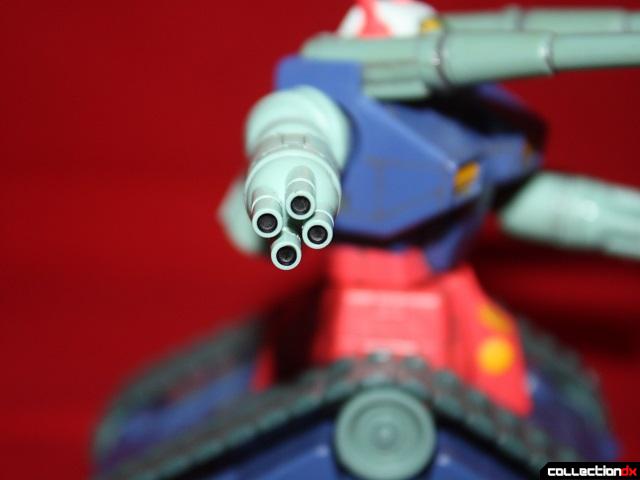 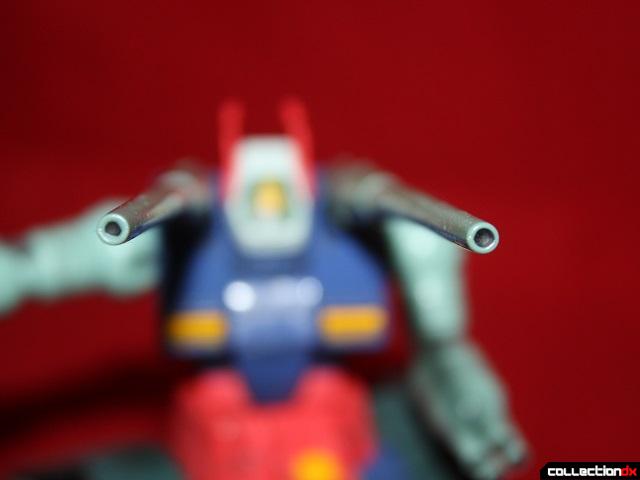 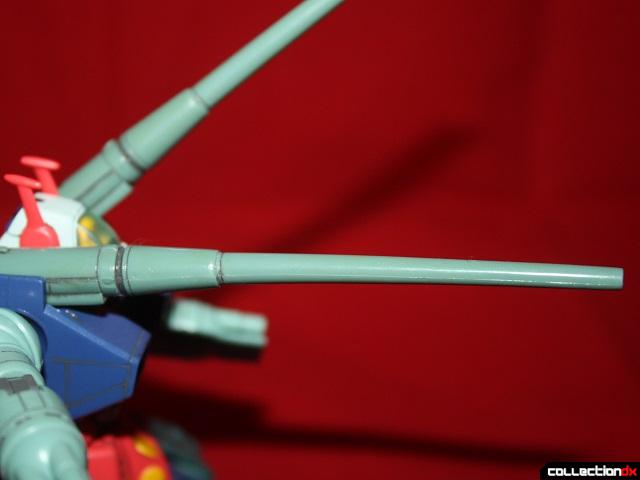 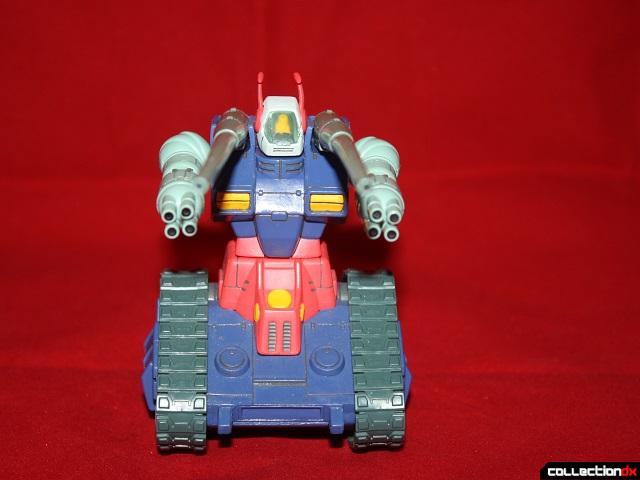 There's not a ton going on with the Guntank, so it's real easy to just fiddle with it and enjoy. I like to think about its capacity to hit multiple targets at once, because by default, it's designed to have two pilots, one in the head as a gunner and another as a driver inside the Core Fighter in the abdomen. 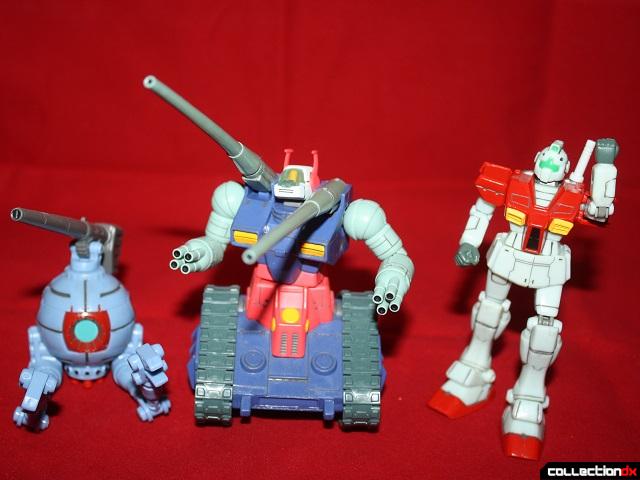 Here it is alongside the MSIA RB-79 Ball and RGM-79 GM, which puts it a little over 4 inches. Either they're Rosebuds or Moose is making his entrance to the ring. 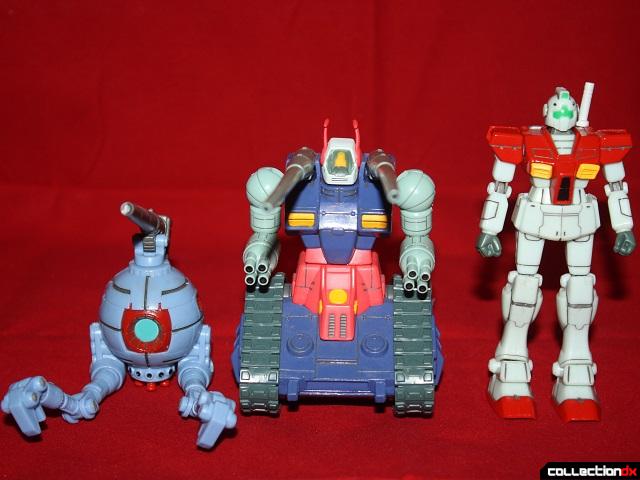 Now they're standing in attention. 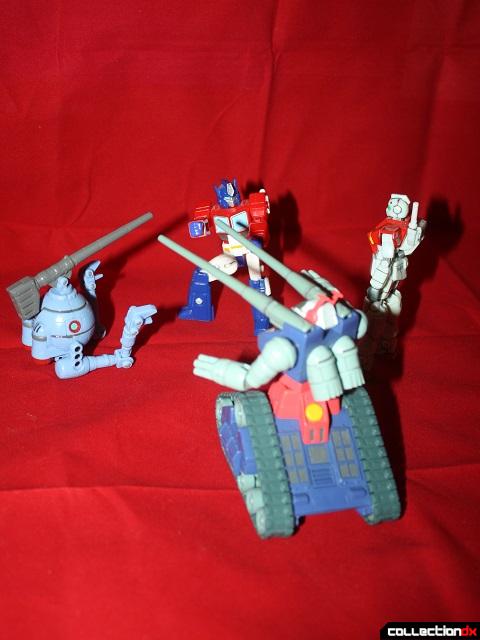 Now they're just being jerks and ganging up on the Action Master. And why not? It's not like he can transform to drive away anymore. 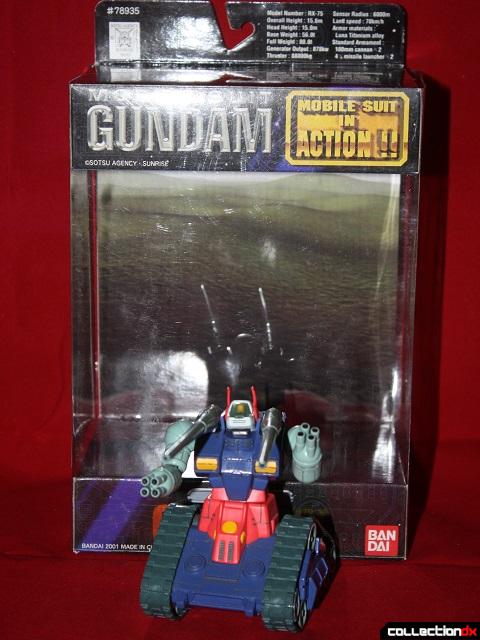 All and all, the MSIA Guntank is a pretty sweet toy and I like everything about it. It doesn't roll, and it can't separate to carry a Core Fighter or combine with the other Project V mobile suits, but at this size, that's fine. And if one wants those features, they can get a kit and build it. However, at the price of $30-40 MISB, it would be cheaper to get the High Grade or only a little more expensive to get the Master Grade. I have both this and the MG, and this? This makes me happier.