Choro-Q (also known as Penny Racers) has been linked with the Transformers brand since the beginning. The early Autobot Mini-cars were re-purposed from Takara's Micro Change toy line and were originally meant to represent tiny robots that turned into actual Choro-Q vehicles. In the early 80's, Takara produced a sub-line called "Choro-Q Robo" that had SD style versions of mecha like the Dougram and Scopedog. These little guys kept the pullback motor gimmick and could even transform into a "car" mode. The short lived Transformers Choro-Q Robo series brought all these aspects together in a fun, playable package. 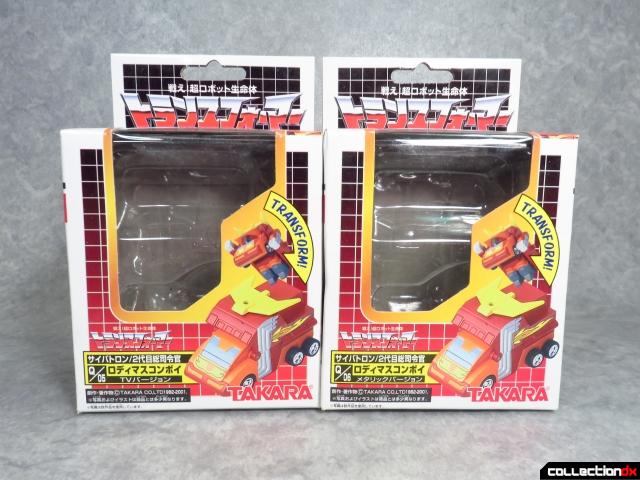 Each Transformer Choro-Q came in an authentic G1 style box. The available characters were Convoy (Optimus Prime), Megatron, and Rodimus Convoy (Rodimus Prime). Each was made available in both cartoon and metallic colors. A handy window lets you see which figure you got. 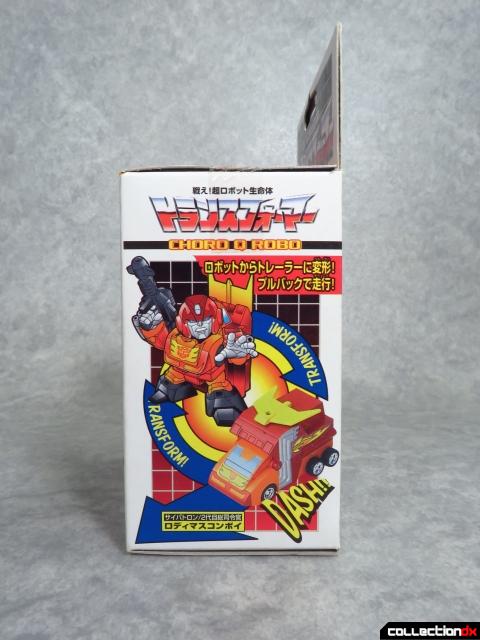 The boxes have unique SD style artwork for each character. 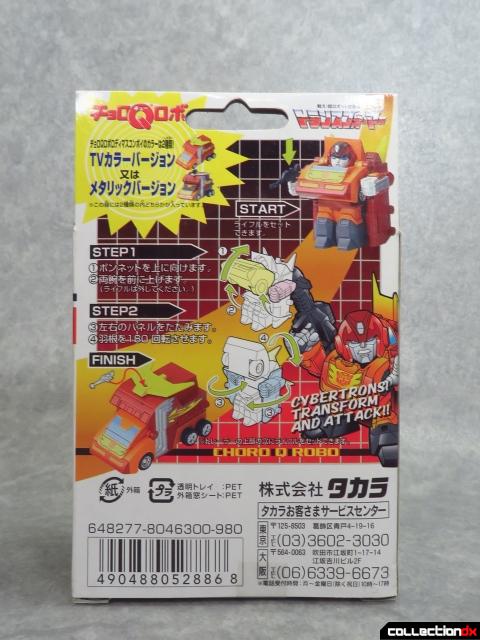 On the back are transformation instructions. 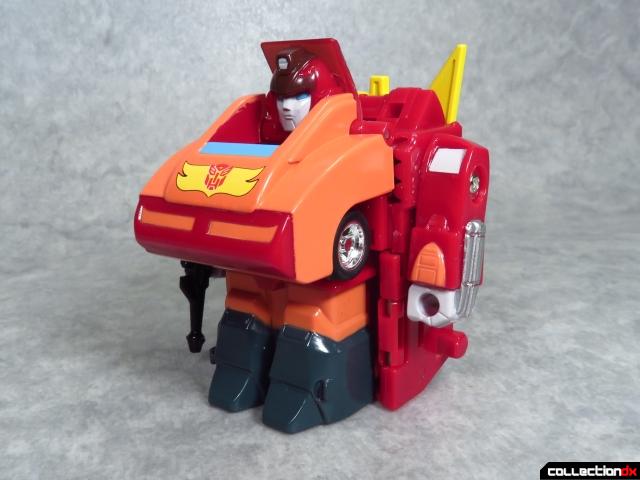 For this review I will be focusing on the "TV version" of Rodimus. This tiny cutesy rendition of the young Autobot leader stands a mere 2 1⁄4 inches tall. His colors are appropriately bright and cartoony, which makes for an eye-catching figure. Rodimus is an all plastic figure with rubber tires. 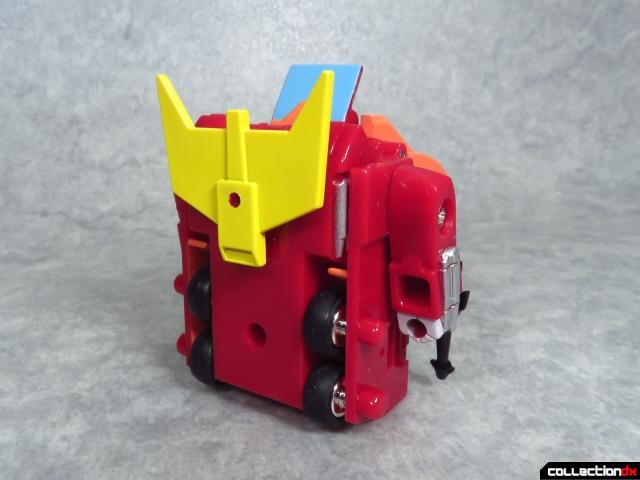 Unlike most transforming Rodimus toys, the Choro-Q has its vehicle mode trailer integrated into the robot mode. This serves as a neat callback to early designs for the character where part of his futuristic truck mode stuck out behind Rodimus's trademark spoiler. 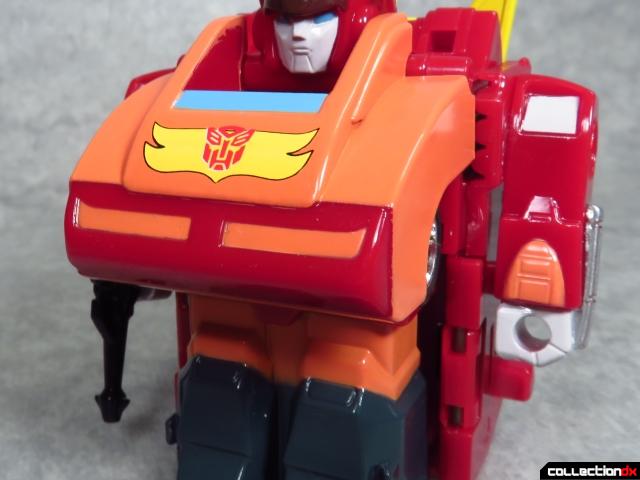 All of the paintwork on the toy is very well done with Rodimus's signature flame pattern tampo printed on his large, ample bosom... 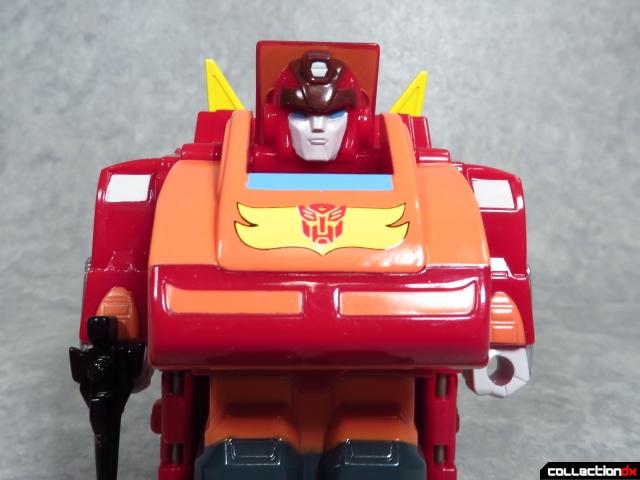 Oddly enough, the Autobot symbol is slightly too large to fit inside the yellow fire. Rodimus' head sculpt is pretty spot on even with its SD proportions. 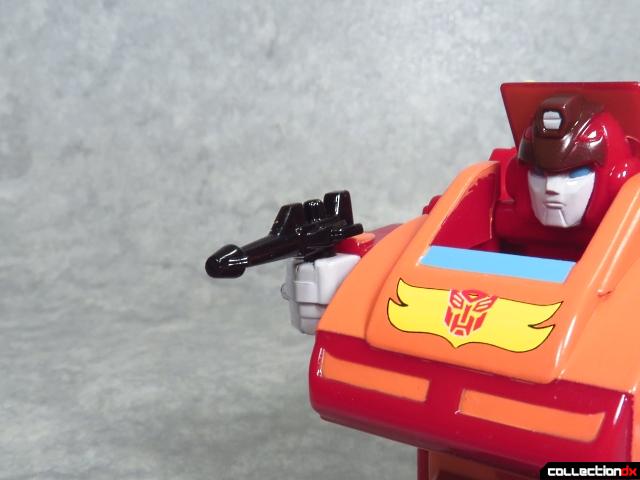 Rodimus is armed with his usual Photon Eliminator. This tiny black rifle is actually a piece of red plastic covered in paint so what little sharpness to its sculpt is slightly softened. 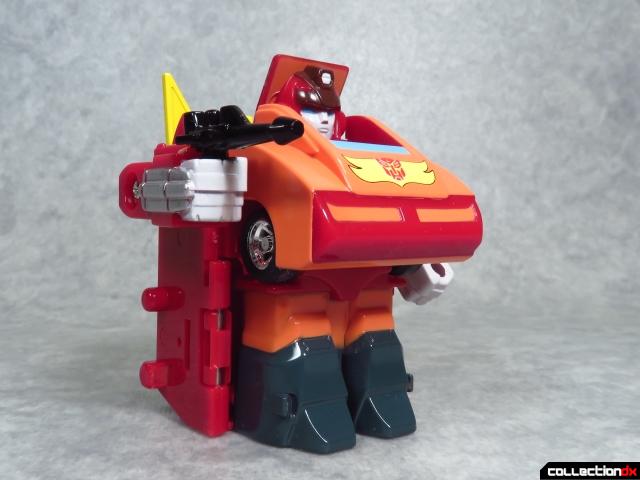 The gun plugs into either hand and Rodimus has enough articulation to put it to good use. 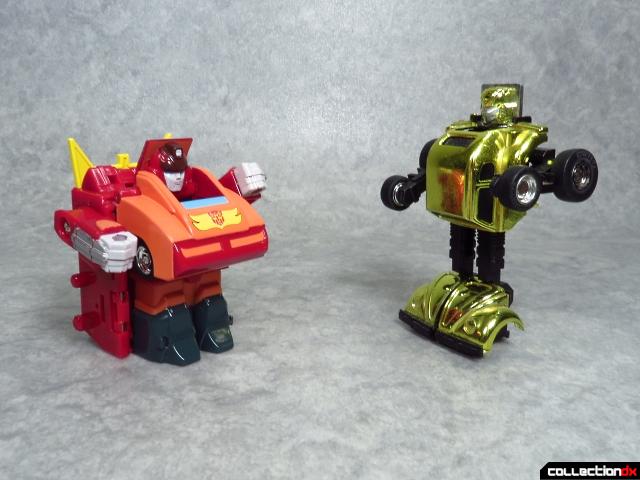 Rodimus looks good with other Choro-Q derived Transformers such as G2 Bumblebee. 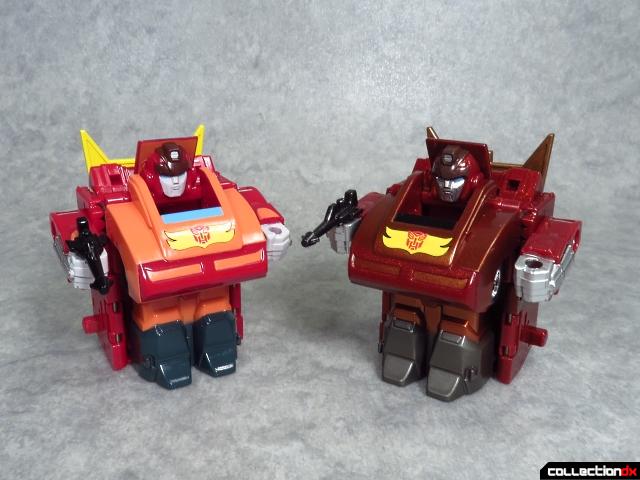 As I mentioned before, all of the Transformers Choro-Q Robo toys came in two color variations. Here is "animation" Rodimus with the matching "metallic version." They are numbered on their boxes as Q/05 and Q/06 respectively. 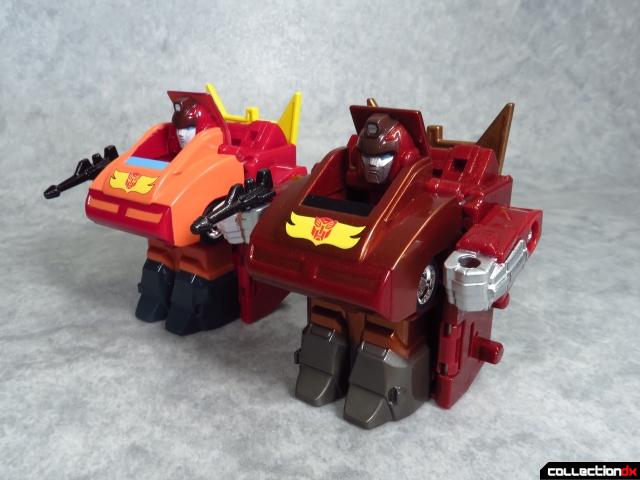 I have to be completely honest, my first reaction after taking the metallic version of its box was, "Wow! This is ugly!" Lots of shiny repaints tend to look a bit gaudy in comparison but this guy is colored like some cheap off brand root beer. It doesn't help that all the parts that were orange on the TV colors Rodimus are now just a slightly darker shade of maroon which makes the metallic one look more monochromatic. 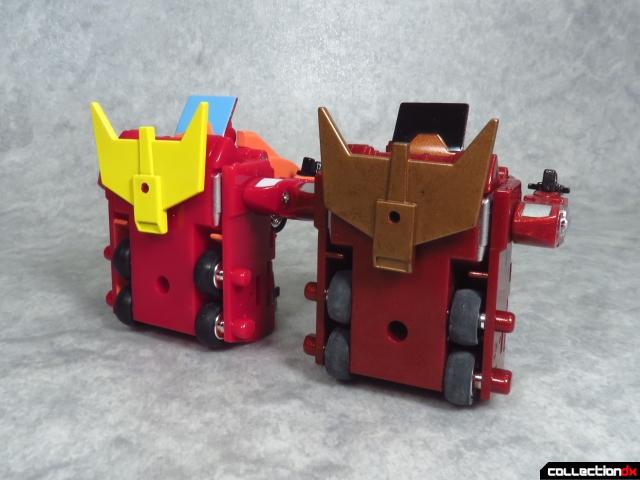 Even the spoiler looks like a rusty two pronged fork with these colors. 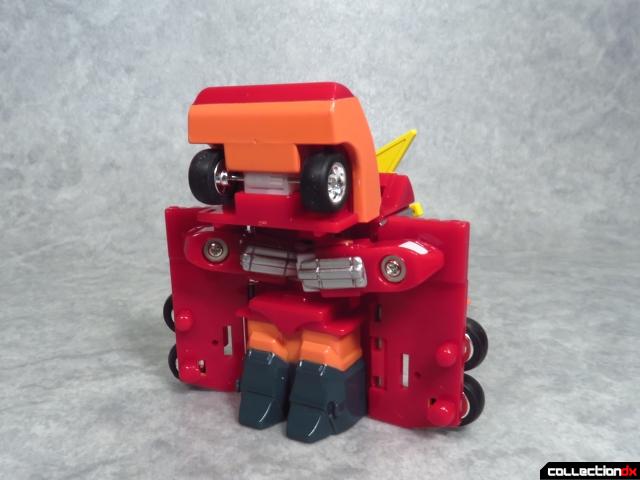 Transforming Choro-Q Rodimus is a quick and easy affair. His large chest flips up to reveal a working pullback motor and to make room for his arms to tuck inside. The yellow spoiler rotates around on a simple swivel. If you find that Rodimus's arms or spoiler are too tight to move, you can easily loosen them up with a small screwdriver. 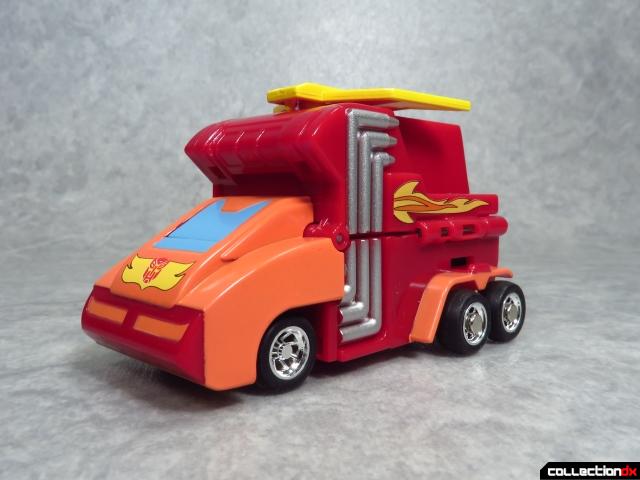 The infamous space winnebago makes for an adorable Choro-Q vehicle. Rodimus' front mounted pullback motor works pretty well but you'll have to wind him up a ways back to overcome the stiffness of his rear wheels. 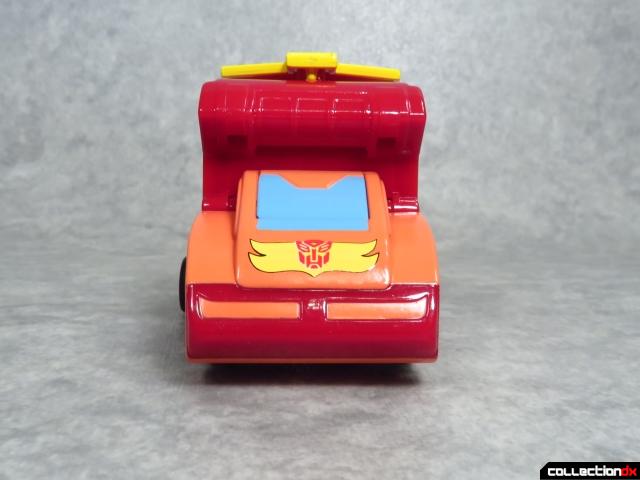 He cuts a mean silhouette for something so cute. 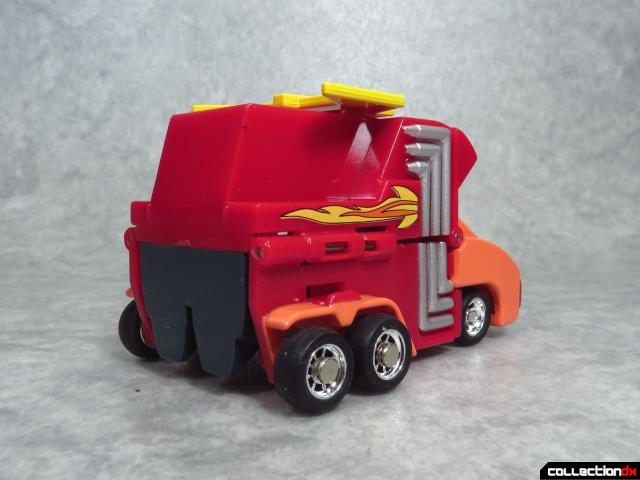 I really dig the small sized version of Rodimus' trailer decals. Even with the very different transformation, Takara managed to sneak them in there. 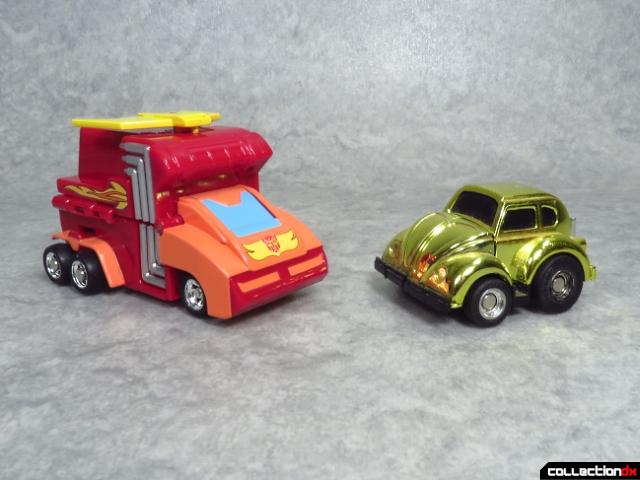 Even in vehicle mode, Rodimus fits right in with guys like Bumblebee. 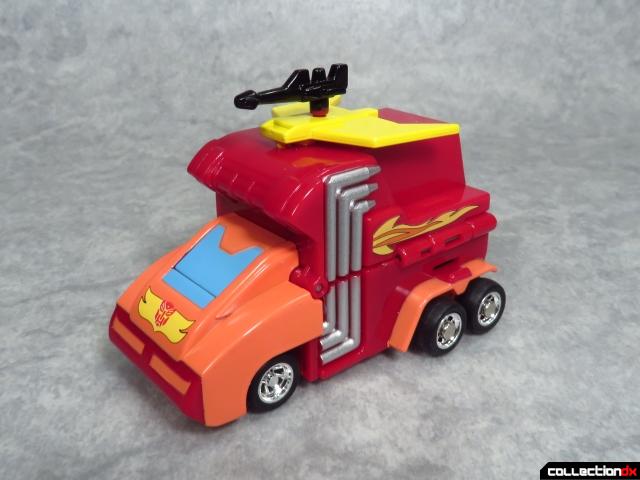 The Photon Eliminator can be plugged in on top for a basic attack mode. 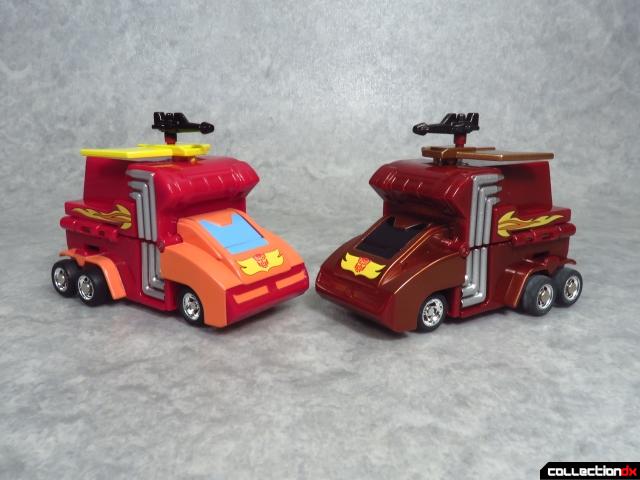 And here are both Rodimus figures in truck mode. 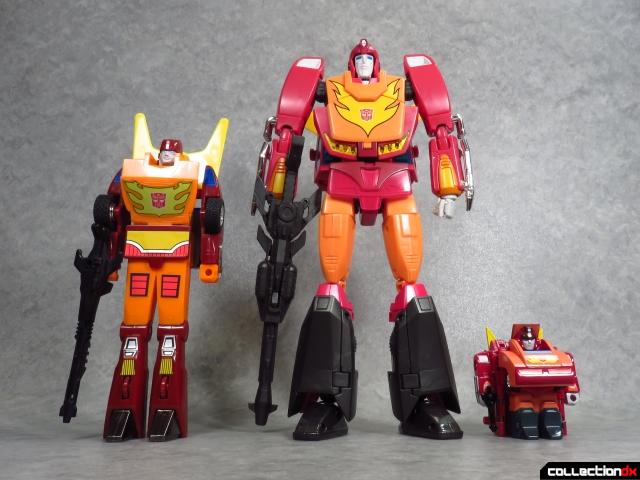 As an avowed fan of the chosen one, I have a Rodimus Shrine where the Choro-Q gets to hang out with other toys. 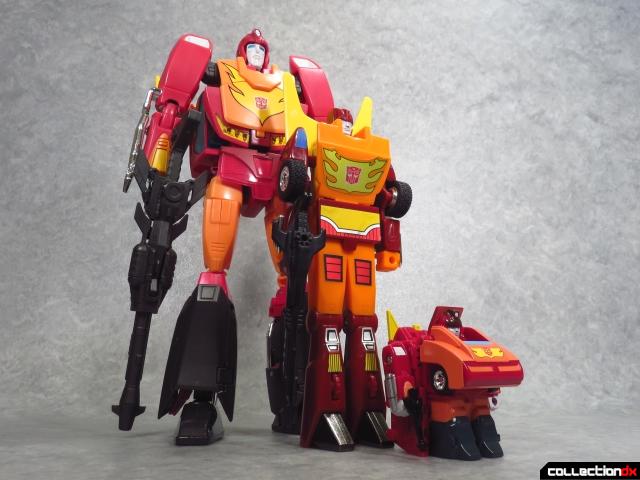 He may be small, but he's still a Prime. 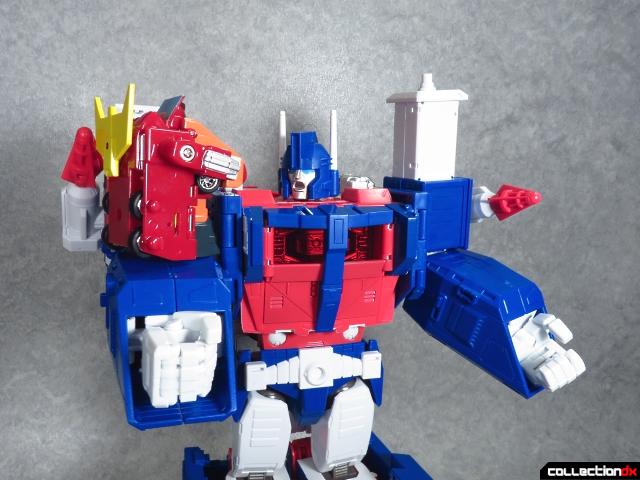 "Rodimus, what happened to you!?"

"Calm down... Perceptor said the effects of the Choro-Qizer will wear off in about a week."

"But how are you going to lead the Autobots in this condition?"

"That's where you come in!" 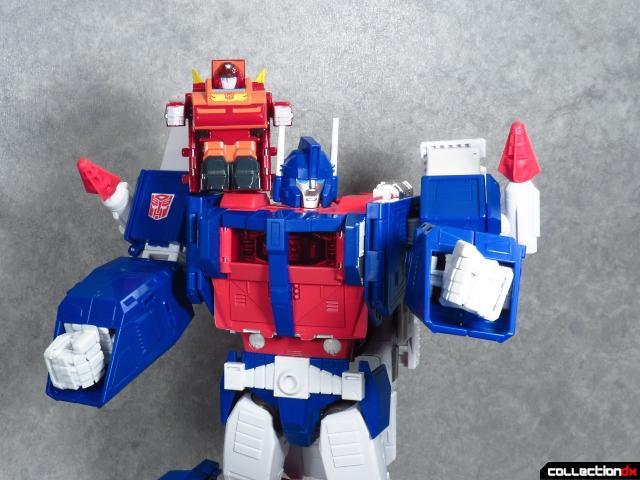 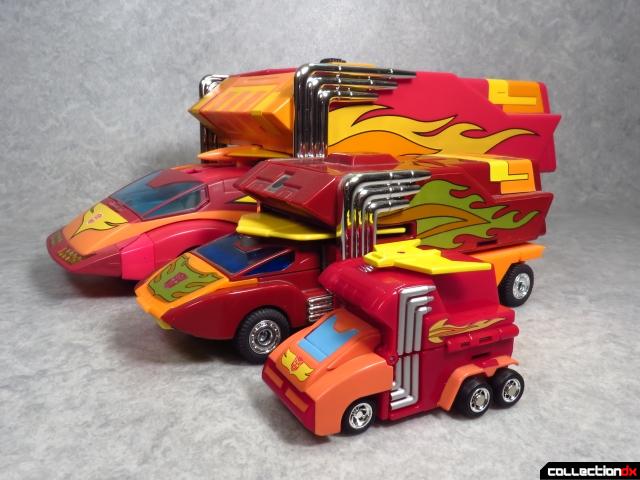 These guys looks terrific when all lined up in vehicle mode. Pure style from the year 2005. 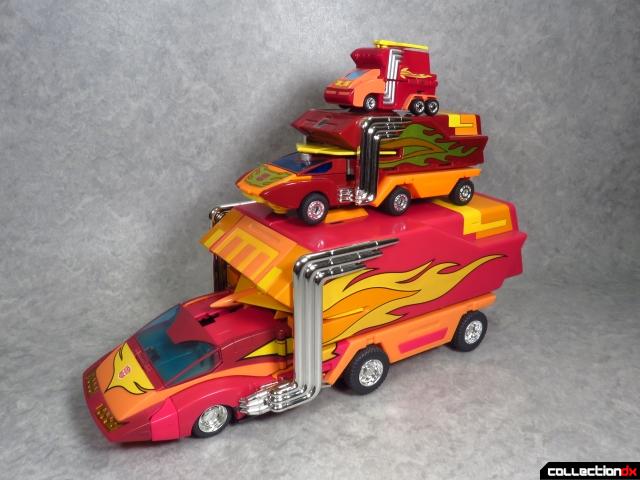 The Choro-Q Robo Rodimus Convoy is a nifty little guy that combines a bunch of concepts from Takara's toy making history. It's a figure that is a lot of fun and has a cool sense of SF Land legacy. These toys originally cost 980 yen but tend to run twice that on places like eBay. I ended buying both color variants in a set for about $25 USD. Fans of Rodimus or collectors into offbeat Transformers toys should definitely check these out. Personally though, I would recommend the TV version. If you have to get both, just let the metallic Rodimus watch the rear and stay out of sight.

Awesome look at the little Rodimus. I have his predecessor, Optimus, and that is a fun toy, too!